As a child, I had two pagan high holy days every year. The first was Halloween, where I advertised my transgender soul by masquerading as a matador, a Roman soldier, Napoleon or Hamlet. The second was Oscar night, when Hollywood put its dazzling glamour on heady display for the whole world.

As I was growing up in the drearily conformist 1950s and early ‘60s, it was hard to find information about popular culture, which wasn’t taken seriously. Deep-think European art films were drawing tiny coteries of intellectuals to small, seedy theaters, but flamboyant mainstream Hollywood was still dismissed as crass, commercial trash.

Confidential magazine, a splashy rag specializing in steamy innuendo, was my main news source about all things Hollywood. I avidly followed the lurid adventures of my favorite movie star, Elizabeth Taylor, as she breezily acquired and shed husbands at the drop of a hat. Eventually, my collection of Taylor clippings and photos reached 599.

As a brash Italian-American oppressed by the postwar cult of cheerful, girly blondeness, I celebrated when the voluptuous, brunette Taylor stole singer Eddie Fisher from that petite juggernaut of peppy blonde niceness, Debbie Reynolds. Much later, I learned to deeply respect the indomitable spunk, professionalism and craft of Doris Day and Debbie Reynolds, but at the time, I darkly viewed them as ruthless tyrants of an ossified WASP establishment. Most of the country automatically took Debbie’s side in the 1958 Fisher scandal, a sympathy stoked by her shrewd posing for an endless series of upbeat, homey photos with her two small children, Carrie and Todd. Her adulterous rival was publicly excoriated as a vixen and tramp, a heartless home-wrecker.

This was the backstory to the supreme Oscar moment of my lifetime — when Elizabeth Taylor, having just survived a near-death tracheotomy during an episode of pneumonia in London, won the award for best actress for her spectacular performance as a sleek Manhattan call girl in Butterfield 8 (1960). Three years after her treacherous adultery, Hollywood was formally forgiving her and welcoming her back to the fold. 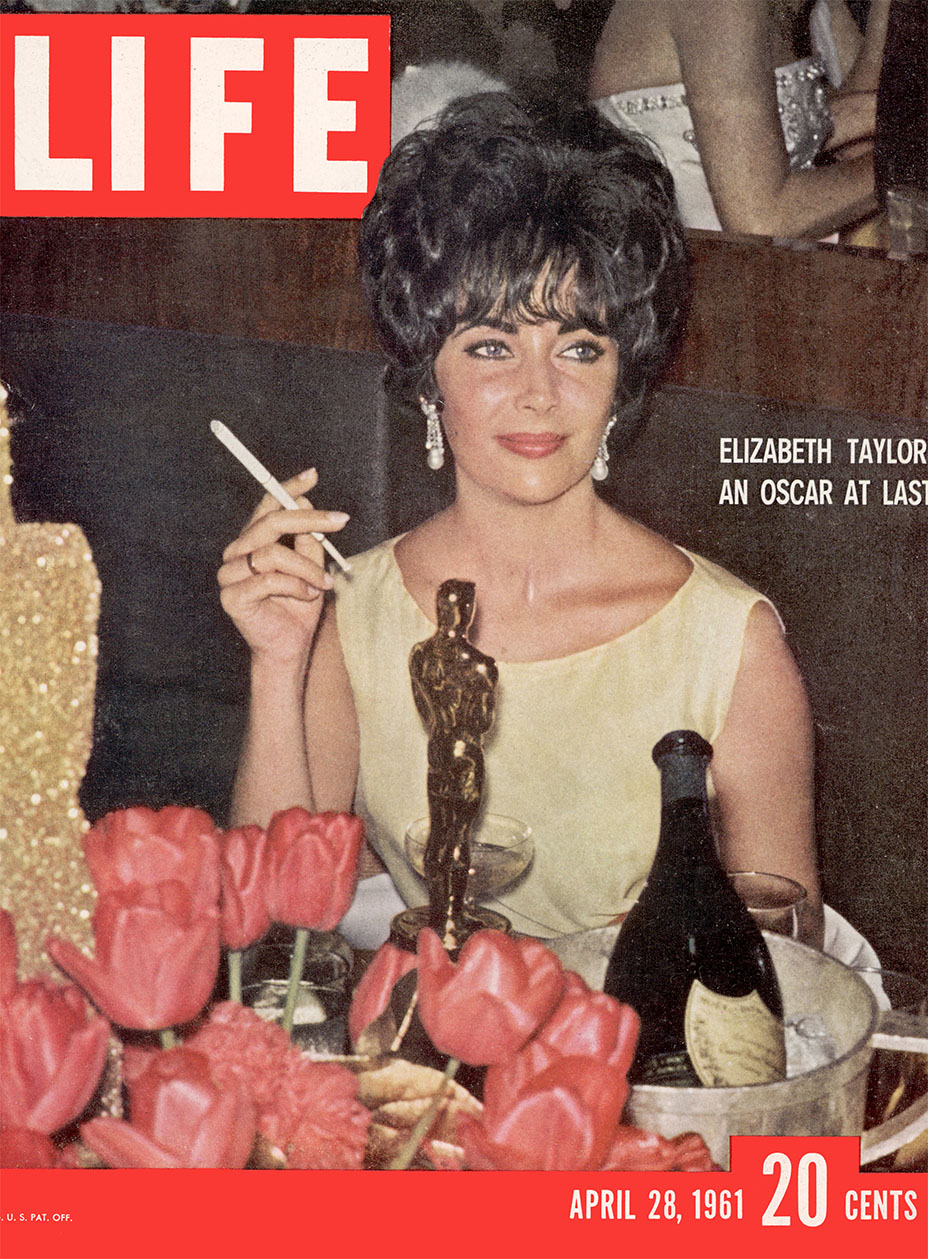 Watching the Oscars on TV in upstate New York, I was in near-delirium at Taylor’s unexpected win. My breathless state of ecstasy lasted for the entire next school day, where I felt like I was floating on a cloud. In retrospect, I realize that Taylor’s triumph was indeed a huge cultural watershed, a prefiguration of the coming sexual revolution.

But a surprise waited. The 1961 Oscars were still being broadcast in black and white. A week later, a gorgeous full-color photo of Taylor regally seated at the Oscars party appeared on the cover of Life magazine. Her white cigarette holder was elegantly raised above a full champagne glass near a bottle of Dom Perignon resting on ice. The billowing white skirt of her floral-embellished Christian Dior dress was barely glimpsed. We saw only her starkly simple, pale yellow bodice that seemed to be channeling the golden glow of the Oscar statuette, which was offering her its adoration from amid a burst of red tulips, matching her full, crimson lips.

That night, with her magnetic composure and luminous charisma, Taylor exuded all the pomp and power of old Hollywood, from which she had emerged as a child star just before the decline of the studio system. Even her glossy raven bouffant was a work of art, because surely those intricate petals had been sculpted by her close friend, hairstylist Sydney Guilaroff, one of the creative geniuses of MGM production at its height.

Oscars: Chris Matthews on Why 'Hidden Figures' Was "Maybe the Most Important Movie of the Year" (Guest Column)

The Life cover also revealed a strange perversity: austerely presenting herself without necklace or brooch, Taylor seemed to be wearing the vertical, white tracheotomy scar on her throat as a fashion accessory. It was a tour de force of ambiguous eroticism, like a Catholic saint’s statue of a martyr flaunting her wounds.

Taylor enthroned with her Butterfield 8 trophy is probably the greatest post-Oscars photo ever taken. Next would be a picture of Faye Dunaway breakfasting at The Beverly Hills Hotel the morning after she won the best actress for Network (1976). Lounging at poolside in her creamy silk dressing gown, newspapers scattered at her feet, Dunaway contemplates her Oscar with a tinge of ironic detachment and fatigue.

This bleak, brilliant photo marks the arrival of a new generation in Hollywood, hip, smart, and cynical. The mythic grandeur of old Hollywood and its pantheon of celestial stars is already gone.