In his long-awaited return to the Croisette, Spike Lee drew a 10-minute ovation at the world premiere of his latest film, BlacKkKlansman.

The evening was poised to be dramatic if not redemptive given that Lee was famously overlooked for the Palme d’Or in 1989 for Do the Right Thing. The prize was awarded that year to Steven Soderbergh’s sex, lies, and videotape. Over the ensuing years, Lee has made no secret of his disappointment with that year’s jury president, Wim Wenders, whose film Pope Francis: A Man of His Word made a rousing debut at Cannes on Sunday night. Both BlacKkKlansman and Pope Francis will be released by Focus Features, the former on Aug. 10, coinciding with the one-year anniversary of the deadly riots in Charlottesville, Virginia.

The audience broke out in applause a half-dozen times during the screening, followed by four minutes of applause during the credits and a six-minute standing ovation. Afterward, director Christopher Nolan, who was at the premiere, was spotted giving Lee a hug.

BlacKkKlansman stars John David Washington, Adam Driver and Topher Grace were on hand for the premiere of the film, which had not been seen in its entirety by anyone other than Lee before Cannes. The film’s last sequence was one of the most emotional finales to hit Cannes in recent memory, splicing in real footage from the events in Charlottesville. (Watch the trailer, which Focus Features unveiled Monday, here.)

Right before the film premiered, Lee didn’t give an opening statement but called out to those in the balcony: “Brooklyn in the house!” He arrived at the Palais wearing two knuckle rings, one of which read “love” and the other “hate,” along with a pair of Nike shoes — one white, one back — that featured the name of the film on the side of each.

BlacKkKlansman, which centers on a black police officer (Washington) who infiltrated the KKK in the 1970s, marks Lee’s sixth time in Cannes’ official lineup. He also screened She’s Gotta Have It and Jungle Fever in competition, Girl 6 out of competition and Summer of Sam in Directors’ Fortnight. 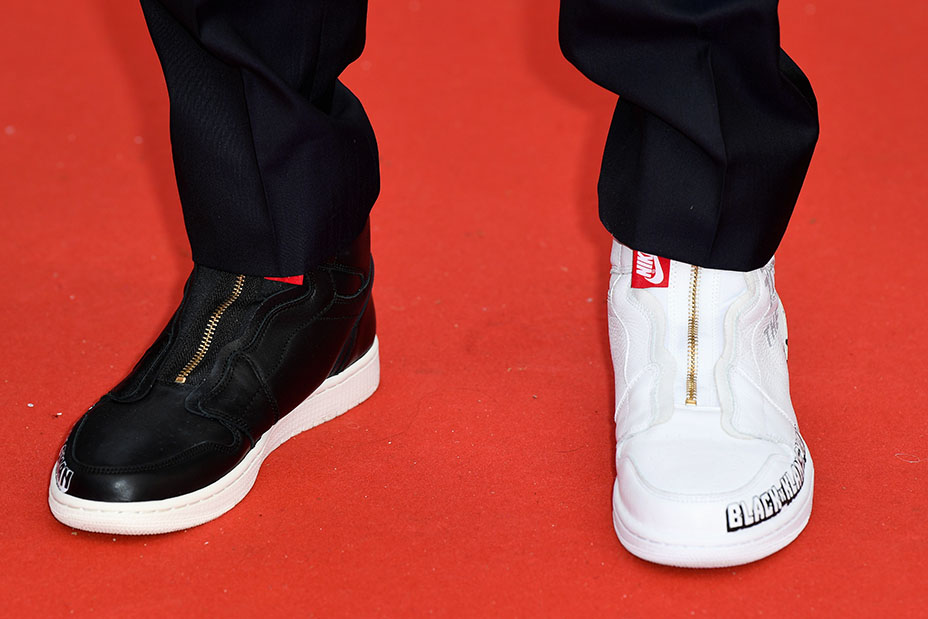 Gregg Kilday contributed to this report.