Cannes, the film festival, won’t be happening this year.

But while the French government’s extended ban on large gatherings because of the COVID-19 pandemic killed all hope of a return to the Croisette in the spring, the industry has responded with two virtual events to keep the Cannes Film Market alive.

One is run by the official Cannes Marché du Film and the other is organized by the film sales divisions of the top four agencies — CAA Media Finance, UTA Independent Film Group, ICM International and Independent Group and Endeavor Content — as well as several indie production and sales operations, including STX Entertainment, AGC Studios and Sierra/Affinity.

Details of the entertainment industry’s first-ever virtual film markets still are being worked out. But the two markets are set to run parallel, kicking off June 22.

There was initial confusion surrounding the dueling events, with some thinking the two markets were one and the same and others considering them competitors.

In reality, says Marché executive director Jérôme Paillard, the two will be “complementary,” with the official Cannes version screening mainly finished films and the still-unnamed agencies’ version focused on big-ticket packages — a script with director and talent attached — pitched to the international presale market.

Says Paillard, “We’re trying to coordinate so the markets can run alongside each other because they are essentially serving different sections of the industry.”

Finished or nearly finished films, such as AGC Studios’ Breaking News in Yuba County or the German period drama Narcissus and Goldmund, from Beta Cinema, will screen in the virtual Marché. Packages — akin to Rocket Science’s female-fronted, big-budget reboot of Cliffhanger and FilmNation’s Chris Hemsworth-Tiffany Haddish comedy Down Under Cover, both of which presold at 2019’s physical Cannes — will be pitched in the new agency market.

Rena Ronson, co-head of UTA Independent Film Group, says their market is trying to mimic Cannes pitching as much as possible: “Our intention is to curate virtual gatherings to do business that would otherwise be handled in hotels or on beaches.”

The virtual Marché will most clearly resemble the traditional event. In place of the “bunker” — the physical market in Cannes’ Palais du Festival —there will be a new platform, the Marché du Film Online. It will have virtual cinemas screening films on a set schedule — no on-demand screenings, to preserve the audience experience — and virtual booths where companies can present their sales slates and hold one-on-one meetings via Zoom. Cannes also plans to offer live-stream versions of its conferences and panels.

Meanwhile, the first two days of the independent market will be dedicated to presentations, similar to industry showcases like ShoWest or CineEurope, with companies screening prerecorded pitches. These are planned as the virtual equivalent of the packed buyer presentations of Cannes past, where Ron Howard or Tom Ford wowed crowds of 300-plus international buyers in the Majestic Hotel ballroom, securing financing for their next project.

The final days of the indie market will be set aside for buyer meetings — and scheduling could be a nightmare.

“It’ll be like herding cats,” one veteran sales agent quipped, describing the challenge of trying to get fierce competitors to agree on time slots for presentations and screenings. Many expect companies to jump the gun and hold private screenings for select buyers or send secured VOD links ahead of the official market start.

Then there’s the added challenge of doing all this in multiple time zones. To avoid VOD screenings, the virtual Marché is planning to repeat live streams of market films at separate slots for Europe, the U.S. and Asia. “We want to keep them on the same day, if possible, to maintain that urgency of everyone watching the film at the same time,” says Paillard. “If you just send links to people, they don’t necessarily take the time to watch them, [and] it’s difficult to organize meetings and sales negotiations on the back of that.”

For sales agents, this will mean very, very long days. Pacific coasters, nine hours behind Cannes and 17 hours behind Sydney, will be among the hardest hit.

“It’ll be 7 to 8 a.m. meetings with Europe, then North and South America and into the night for Asia and Australia,” says Jonathan Deckter of Voltage Pictures.

At least it will be cost-effective. In addition to saving on flights and hotels, the virtual markets essentially will be free. Accreditations for the Marché du Film Online cost $103 for early-bird booking until May 29 and $212 after that. That’s a steep discount on the cost for the physical Marché, which ran from $347 for early-bird to $471 for on-the-spot accreditation, with additional costs for access to market-connected workshops and conference events. Booking a virtual booth is free, as are virtual screenings. And the independent market will be completely gratis.

Another hidden advantage of the lockdown: talent availability. “Nobody is working, so everybody has time to read scripts,” says one agent. “Even A-list talent is champing at the bit.”

But packaging in the midst of a pandemic does pose challenges. Where to shoot, for example.

Studios and production companies are negotiating guidelines with the unions and government officials to resume shooting, perhaps as early as late summer. Certain territories, including Iceland and the Czech Republic, whose governments have been more effective in containing the spread of COVID-19, could get going even earlier.

“Other parts of the world are opening up faster than the U.S., and I think we are going to have to be faster and more flexible in where and how we produce,” says Brian Beckmann, CFO at Arclight Films, which has several productions — including the disaster thriller Deep Water and the actioner Long Gone Heroes, starring Guy Pearce and Ben Kingsley — on the starting blocks.

At the virtual market, Beckmann notes, projects that can start shooting the day restrictions are lifted could have an advantage. “If you have a project that can get up and running very quickly and get finished in nine months instead of the usual 12 to 18 months, you’ll be at a huge advantage over your competition,” he says.

“Even if things open up and there is a window of a few months in the summer and fall, there will still be uncertainty, with the possibility of the virus coming back again in the winter,” Garrett says. “The indie market can be more nimble because we don’t need two to three months of prep like some studio productions.”

A big unknown looming over the virtual market is whether there will be sufficient buyer demand. The global COVID-19 lockdown has sent viewers flooding to streamers in record numbers — Netflix added 15.8 million new subscribers in the first quarter of the year, and regional SVOD and AVOD services have notched high-double-digit growth in recent months. In late March, the streamer picked the faith-based movie musical A Week Away from CAA Media Finance and the Melissa McCarthy dramedy The Starling, from CAA and UTA Independent. “The platforms are hungry. There’s a massive appetite for product at the moment,” says one sales agent. “Anyone with a finished film will be able to sell it at [virtual] Cannes.”

But for most international distributors, Garrett notes, growth in digital revenue has not replaced the big hole created by the loss of box office as cinemas worldwide have shuttered.

“Everyone is hurting. It’s not clear what kind of resources people will have in order to [pre-]buy,” he says.

One major European buyer also pointed to an expected glut on the theatrical market when cinemas eventually do open up. “All the studios have pushed their films to the end of the year. There’s no slots left,” the distributor complained. “If I buy anything now, it will have to be for 2021 at the earliest. More likely 2022.”

Despite concerns and doubts, there is broad agreement that right now a virtual market is exactly what the indie film industry needs.

“It is important for filmmakers and the health of the independent film industry that we work together to help sustain the business through the summer and beyond, if necessary,” notes Roeg Sutherland, co-head of CAA Media Finance. “When you are selling movies that are going into production in 2021, you are selling hope.”

Hope — that production will start up again, that cinemas will reopen, that the global economy will recover — is what everyone “attending” the Cannes market from their respective couches this year is counting on.

While everyone involved wants the two markets to be successful, there’s also a hope that the first all-virtual Cannes will be the last.

“We don’t want to, and we can’t, replace the physical market,” says Paillard. “But maybe what we learn this year will be a model for how the virtual and physical markets can work together in the future.”

Jessica Lacy, head of independent and international film at ICM, echoes the sentiment for the agency-led market. “A lot of what we do with this virtual market could be important moving forward during this sequestered period we are living through,” she says. “We are hoping we can figure this out so it can be implemented effectively in the future if needed.” 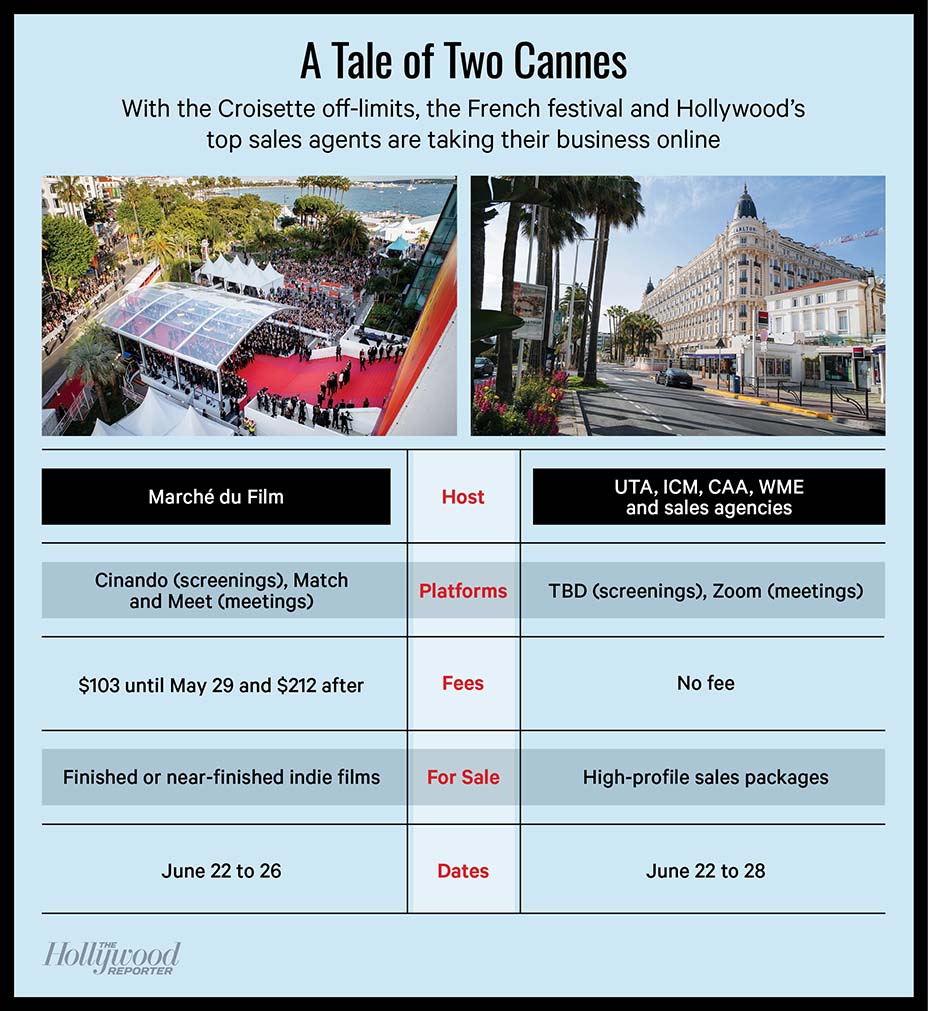