The name Jin Yong is as synonymous with Hong Kong’s rich tradition of wuxia cinema as Stan Lee is with the American superhero movie.

The renowned period novelist (real name: Louis Cha Leung-yung) is said to be the world’s most widely read 20th century Chinese writer, and the countless film and television adaptations of his 15 books indelibly altered the shape of Chinese popular culture.

“A friend of mine once said to me, ‘I feel lucky to be born Chinese, because it means I can read the wuxia novels of Jin Yong,’” Taiwanese screen goddess Brigitte Lin, who immortalized the character of Asia the Invincible in the classic martial arts films Swordsman II and its sequel, tells THR. “Jin Yong’s work is an indispensable part of the Hong Kong film industry — all of the adaptations of his work have been bound for success.”

Often likened to greater China’s answer to Game of Thrones or J.R.R. Tolkien’s The Lord of the Rings, Jin’s sagas are set in various periods of Chinese history, ranging from 6th century B.C. to the 1700s, and covering the Song, Yuan, Ming and Qing dynasties. His famously intricate narratives bring to life the ancient worlds of jianghu and wulin martial arts and feature mythic heroes seemingly ready-made for the big screen — superhuman martial arts masters driven by honor, integrity and discipline.

Yet despite their deep and enduring influence in Chinese pop culture, there hasn’t been a big-screen adaptation of one of his books in nearly 20 years. But now a Jin film renaissance appears to be on the horizon, with a succession of adaptations expected to storm the Chinese multiplex over the next decade.

“Since the 1950s, Jin’s martial arts novels have provided a bottomless well of inspiration for filmmakers,” says Fion Lin, assistant curator for the Performing Arts at the Hong Kong Heritage Museum, where a permanent Jin Yong Gallery exhibits artifacts that document his writing process as well as the TV series, films and video games based on his work.

“The legendary characters he created, especially, were so popular with readers that they moved swiftly and easily from printed media to silver screen,” Lin adds, noting that more than 40 financially successful Hong Kong films were made from Jin’s stories.

Most of the books — published in the 1950s and through the ’70s in Hong Kong and Taiwan (but not until later in China, due to the media censorship of the Cultural Revolution) — are stand-alones, but the Condor series (The Legend of the Condor Heroes, Return of the Condor Heroes and The Heaven Sword and Dragon Saber, which took place almost a hundred years after the Condor books) forms a trilogy featuring a set of beloved recurring characters. 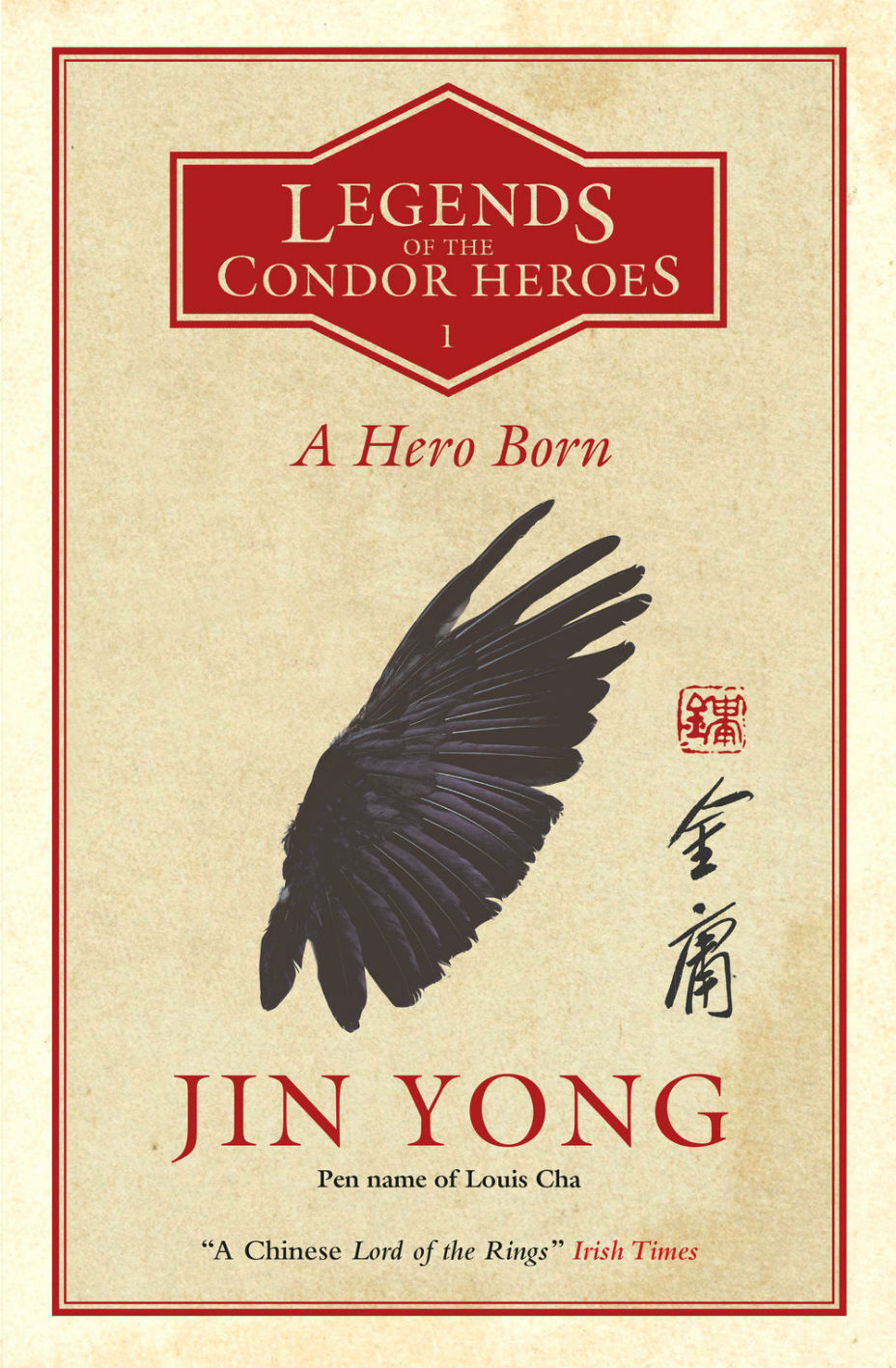 Hong Kong’s legendary Shaw Brothers Studio, which specialized in martial arts releases throughout the ’70s, was particularly keen on the Jin bibliography, churning out one adaptation after another, including Legend of the Fox (1980), The Proud Youth (1978), Ode to Gallantry (1982) and The Brave Archer trilogy (1977-83), based on the Condor books.

The popularity of Jin’s work continued into the 1990s as films adapted from — or even simply inspired by — his stories regularly stormed the box office. Some of them were produced by Jin superfan Tsui Hark, including The Swordsman trilogy based on The Smiling, Proud Wanderer, co-starring Lin and Jet Li, which collectively earned more than $7.7 million — a sizable sum for the small Hong Kong theatrical market at the time.

Others helped launch, or cement, the careers of some of Hong Kong and Chinese cinema’s most iconic stars, such as Stephen Chow (1992’s Royal Tramp I and II, which together brought in $10 million), Leon Lai (1993’s The Sword of Many Lovers) and Gong Li (1994’s The Dragon Chronicles — The Maidens). In addition, art house star Wong Kar Wai’s Ashes of Time and the comedic companion piece that he produced, The Eagle Shooting Heroes, were each inspired by Legend of Condor Heroes.

On television, JIn’s work was just as sought after. For a stretch in the ’80s, Hong Kong’s dominant station, TVB, did one series based on a Jin novel every year. That included the ever-popular Condor Heroes trilogy, The Deer and the Cauldron (which starred a young Andy Lau and Tony Leung Chiu-wai, both fresh out of the station’s acting training course) and The Flying Fox of Snowy Mountain.

The novels were turned into television series in mainland China all through the 2000s, in addition, Jin’s stories have also been adapted for video games, such as the massively popular multiplayer game Heroes of Jin Yong, which combines all of his major characters, spawned a dozen sequels and has remained one of the Chinese-speaking world’s top gaming franchises for two decades.

Producer-actress Josie Ho, daughter of Hong Kong casino magnate and billionaire Stanley Ho, is investing in a potential series of adaptations through her 852 Films banner. “Jin Yong’s novels are like Marvel Comics in the U.S.,” Ho says, noting how the writer’s hundreds of heroes with individualized skills and personas, all nestled into a deep historical context, matches the Marvel Cinematic Universe in terms of breadth and originality.

Ho’s first Jin project — the title of which has not yet been disclosed — will mark 852’s first foray into the mainland Chinese film market (her company has co-produced the London-set How to Talk to Girls at Parties; Hong Kong director Pang Ho-cheung’s Dream Home, in which Ho starred; and Revenge: A Love Story, featuring singer-actor-director Juno Mak). 852 has partnered with China’s The One Media Group, which bought the mainland film adaptation rights to Jin’s major works for an undisclosed sum in September.

“It ignited my passion for the wuxia genre and my fascination with the wuxia world,” the legendary director said at a September news conference announcing the One Media projects. “The film rights, production technology and market potential weren’t available for me to direct this film adaptation back then, so I’ve been waiting all this time to do it.”

The considerable popularity of Jin’s novels in mainland China — where his books were embraced passionately after the country opened its doors in the 1980s (late Chinese leader Deng Xiaoping was among his fans) — combined with the fact that there have been no recent movie adaptations, could mean enormous box-office potential for the property in the current marketplace.

Apart from Tsui’s trilogy and Ho’s franchise ambitions, director Gordon Chan (Painted Skin) is slated to helm an adaptation of Legend of the Condor Heroes (the precursor to Return) for Hong Kong powerhouse Media Asia. Meanwhile, Sun Entertainment Culture is adapting The Book and the Sword, Jin’s 1955 debut novel, to be written by James Yuen (The Warlords) and directed by Jacob Cheung (Cageman).

“Jin Yong’s novels have proved so popular with readers around the globe, and there is a well-known saying: ‘Wherever there are Chinese, you will find Jin Yong’s novels,’” notes Lin, the curator of the Hong Kong Heritage Museum. “His characters and the martial arts world have crossed geographical borders and become something akin to a lingua franca of the Chinese diaspora.”

Because of their rich characterizations and structural similarity to the Marvel universe, Ho says she believes that Jin’s sagas might also deliver China’s first major crossover blockbuster to the international marketplace.

London-based publishing house MacLehose Press is hurrying to set the stage. The company has secured the rights to produce the first authorized English translation of The Legend of the Condor Heroes, the first installment of which was released in January to coincide with Chinese New Year.

With 11 more volumes to be released in the Condor Heroes saga alone, the Western world has plenty of catching up to do before one of the globe’s great fantasy series makes its big-screen return.

A version of this story appears in The Hollywood Reporter’s May 9 daily issue from the Cannes Film Festival.