Ahead of Captain Marvel‘s release, Marvel Studios began hinting that Brie Larson’s superhero wouldn’t be the only breakout star from the film. Goose the cat received toys and a spot in the trailers, priming audiences to be ready for some cuteness.

While comic book fans knew that Goose (played by a cat named Reggie) was in fact likely an alien known as a Flerkin, audiences everywhere are now just hearing that word. So what in the actual world is a ‘Flerken’? That’s the question Nick Fury (Samuel L. Jackson) wrestles with in Captain Marvel after stumbling upon and bonding with a ginger kitty named Goose.

In the film, Fury meets Goose while sneaking around the Pegasus’ archives with Carol Danvers (Larson). Goose is more than meets the eye. He freaks out Skrull commander Talos (Ben Mendelsohn) just by walking into the room for reasons the audience won’t immediately appreciate. The dots don’t connect when Talos identifies Goose correctly as a Flerken. But it takes kitty going full kraken on a group of Kree shock troops for Talos’ concerns to sink in.

Captain Marvel gives no lessons on Flerken physiology or behavioral traits, and sticks only to the basics: Don’t mess with Flerkens, or else accept being swallowed whole. Whatever Captain Marvel doesn’t divulge about Flerken habits can be easily gleaned from the pages of comic book stories past. The Flerken’s first official Marvel appearance goes back to 2014 in Captain Marvel Vol. 8, #7, when Carol’s cat, Chewie, is revealed as a Flerken during a visit from Rocket Racoon. (Rocket being Rocket, he tries to kill Chewie. He does not succeed.) But read Giant-Size Ms. Marvel #1 from 2006, and Carol, in a battle with the mystic Sir Warren Traveler, makes friends with a different cat and uses it as an impromptu ballistic weapon against her opponent. A Flerken? Maybe not. No tentacles, for one. But it’s Marvel, and Marvel isn’t above a good old-fashioned retcon.

If we’re going by Captain Marvel Vol. 8, #7, then Kelly Sue DeConnick and Marcio Takara deserve the credit for creating the Flerken race; if by Giant-Size Ms. Marvel #1, Brian Reed and Roberto De La Torre. Between the four of them, the Flerken have quite a physiological alien profile. For one, they’re incredibly smart. You baby-talk your cat, your cat looks back at you and you have no guarantee they’re catching your drift at all. You can only hope. Flerkens understand, so make sure to use your best manners and accord them the highest affection. 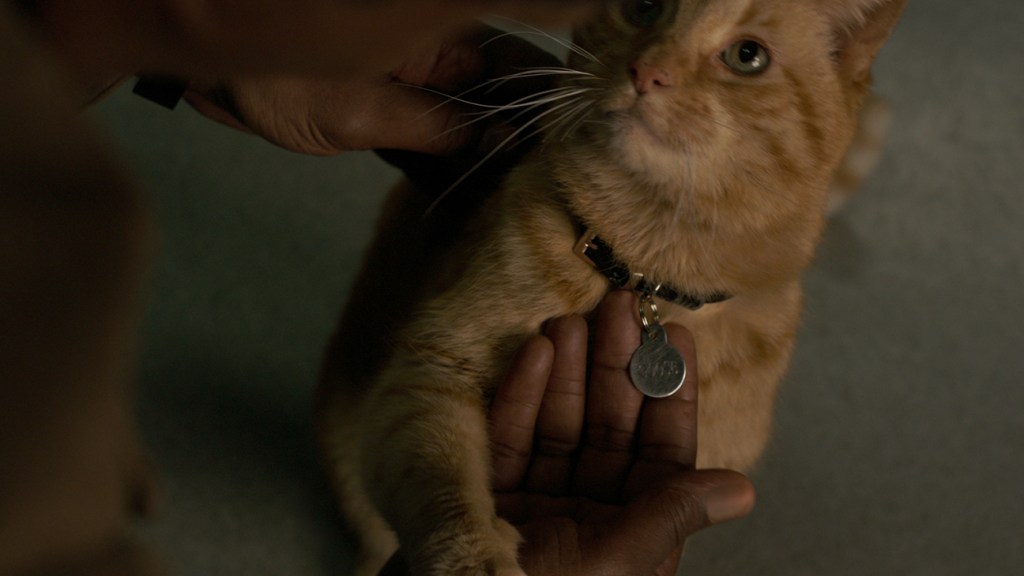 Flerkens also lay eggs (up to 117 of them) instead of giving live birth, so if their mouth-tentacles weren’t a dead giveaway, then their reproductive cycle would be. But more impressive than birthing habits or tendrils are their pocket dimensions. A Flerken can theoretically hold a whole universe in its mouth, which makes safekeeping Infinity Stones an easy task, such as when it swallows the tesseract (aka the space stone). What’s a tesseract compared to all space and time? In a pinch, they can be used as a way of instantly hopping from one location to another via sub-spaces tucked away in their bodies, too.

None of this is elaborated on in the movie, so the viewer must make inferences. Suffice to say, Goose comes in handy, taking out bad guys, hanging onto the tesseract for Fury (before barfing it up on Fury’s desk post-credits) and generally being a purr machine. (The saddest thing: Goose being muzzled by the Kree. They know what they’re doing. Flerkens derive their alien qualities through their olfactory system, so muzzles are basically their Kryptonite.) Even the best kitties can become bad kitties in a split second, and Fury, after jerking his Flerken one too many times, takes a Goose claw to the face, and presto, now we all know how he actually lost his eye and wound up with that gnarly patch instead.

An ignominious tale, but one Fury, spymaster, has kept under wraps for decades. Maybe that explains why Goose hasn’t made a cameo in other Marvel movies; people do get rid of their cats for much less than ocular trauma. But Fury might not have made it to the end of the movie without Goose. Granted, he’s lucky they get along so famously. He might be Flerken food otherwise. They have a bond, though, and one teeny-tiny grievous wound probably isn’t going to separate them. He’s an extraterrestrial beast, that Goose, but he’s one thing more — a very, very good kitty.

What 'Captain Marvel' Changed From the Comics