In next year’s Captain Marvel, Brie Larson’s neophyte superhero will debut as part of her own superteam, but it’s not the Avengers, or even the Guardians of the Galaxy. In the 1990s of the Marvel Cinematic Universe, order was maintained by Starforce — but there might be something rotten at the core, if comic book mythology comes into play.

As revealed by Entertainment Weekly, Larson’s Carol Danvers will already be part of Starforce when she appears onscreen; it’s an elite military unit of the Kree Empire, the alien race that’s responsible for Carol’s powers. In terms of profile, this is a massive shift for Starforce, which debuted in 1992’s Avengers No. 346 and has made only a handful of appearances since then, the majority of which were in the same period (and as part of the same storyline).

The comic book Starforce is, as in the movie, an arm of the Kree military. It comprises a group of disparate Kree soldiers — with names like “Shatterax” and “Dr. Minerva” (slightly renamed “Minn-Erva” for the movie) — who are dedicated, dangerously so, to the whims of the Kree ruler, the so-called Supreme Intelligence. They’re joined, almost immediately, by Ronan the Accuser, who has previously appeared in the Marvel Cinematic Universe in Guardians of the Galaxy, played by Lee Pace; he, tellingly, returns to the role for Captain Marvel. 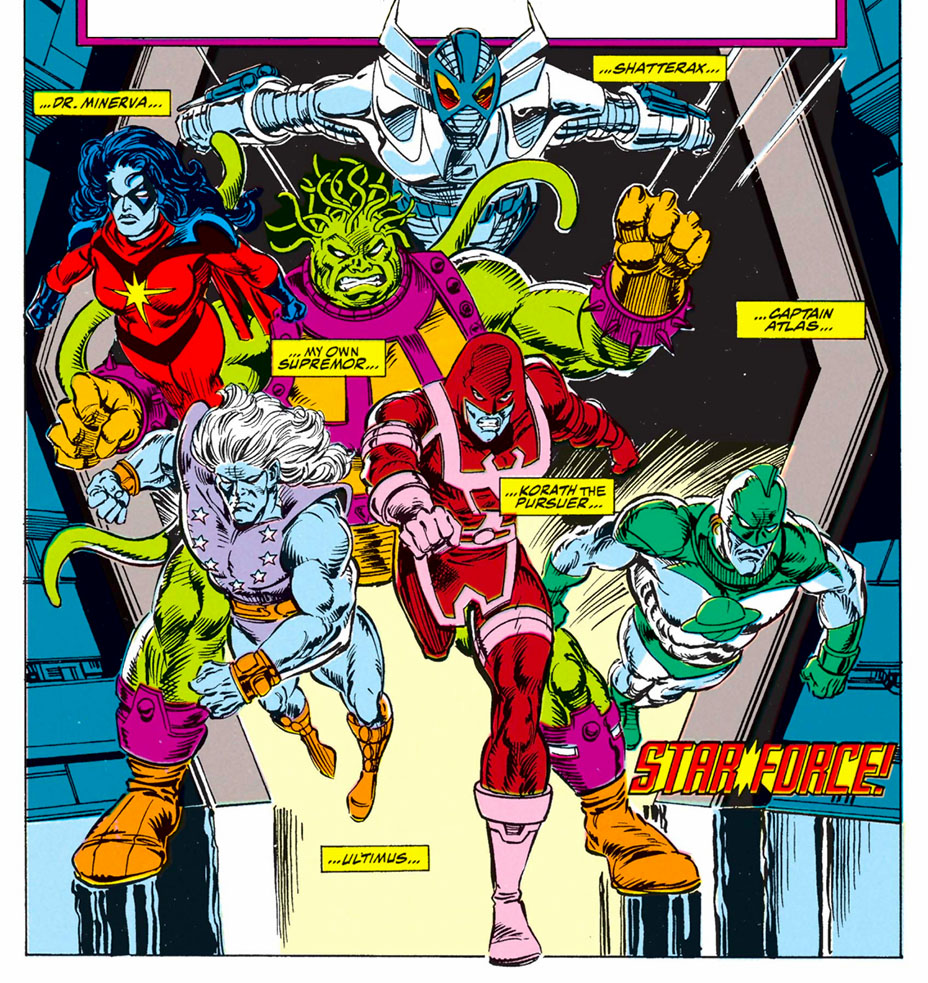 (It should be noted that Carol Danvers was never a member of Starforce in the comics, although Dr. Minerva wears a variation on the first costume Danvers wore in her original superhero incarnation, Ms. Marvel.)

Unknown to the various members of Starforce, who come across as perhaps a little too blindly devoted to their cause, they’re being manipulated by outside forces as part of an ongoing conflict between the Kree Empire and another imperial alien race, the Shi’Ar.

Despite their good intentions, their actions bring them into conflict with the Avengers, as part of a chain of events that ends with a genetic bomb being set off that ultimately kills millions of Kree. As a result, the Kree are conquered by the Shi’Ar, and Starforce is subsumed into the Shi’Ar’s military division the Imperial Guard. (Indeed, in a subsequent appearance, the group is even called the “Shi’Ar Starforce.”)

That doesn’t mean that things will end equally poorly for the MCU version of the group, of course. If nothing else, the Kree empire is still around in the contemporary movieverse, as seen in the two Guardians of the Galaxy movies (and, to a lesser extent, episodes of ABC’s Marvel’s Agents of SHIELD), so an accidental genocide doesn’t appear to be in the cards for Captain Marvel.

However, there is also evidence that Starforce may not survive the movie — or, perhaps, might not make it through the entire movie in one piece. One of the members of Starforce in both comic and movie incarnations is Korath the Pursuer, who — by the time the first Guardians of the Galaxy begins, roughly 20 years after Captain Marvel in terms of MCU chronology — is no longer a member of the Kree military, but a mercenary allied with Ronan the Accuser, who has himself abandoned the service of the Kree.

In introducing Starforce to the MCU, will Captain Marvel also tell the story of the group’s collapse, setting up pieces of the larger mythology that fans are already familiar with? Time will tell — six months, in fact, until Captain Marvel reaches theaters March 8.