The news from Marvel’s San Diego Comic-Con panel that Captain Marvel will take place in the past — the 1990s, to be precise — is a surprising one. So far, the Marvel Cinematic Universe has enjoyed a tight continuity (and contemporary focus) after the 1940s setting of 2011’s Captain America: The First Avenger. But is there a method to the nostalgic madness?

In one sense, the backwards time jump for Captain Marvel is oddly reminiscent of Warner Bros.’ cinematic treatment of Wonder Woman, whose first solo movie took place in the past after her onscreen introduction via a cameo during a contemporary-set movie teaming other, male, flagship characters. (Captain Marvel is rumored to make her debut in next year’s Avengers: Infinity War, although Marvel has yet to officially confirm that detail.)

Putting aside obvious snark about powerful women being relegated to a background so deep that they’re not even referenced in earlier movies (Wonder Woman, at least, came up with a rationale for her absence during the events of Man of Steel when she withdrew from events after the end of World War I), the notion of retrofitting a superhero who existed between Captain America and Iron Man into the Marvel Cinematic Universe plugs a plot hole that’s existed since before the first Avengers movie — namely, didn’t anyone else try to create a second supersoldier after Cap disappeared, and if so, who were they? — while opening up another one immediately: What happened to Captain Marvel to take her off the playing field ahead of the Marvel movies that we’ve seen to date?

(Of course, Ant-Man also retrofit Hank Pym’s quasi-superheroic career into that unexplored space, suggesting that, should Marvel ever want to, they could create a superteam of characters that predated the Avengers should they so wish. Comic book titles like Invaders and Champions remain available in the movie universe, after all…)

What’s particularly strange, and potentially fascinating, about the movie Captain Marvel concept — which isn’t present at all in the comic book version, where Carol Danvers was always a contemporary character — is how clearly it echoes the Captain America narrative: a hero from the past who disappears from the world before re-emerging as a hero out of time … perhaps. (Wait a second; we’ll get there.) Is Brie Larson’s Danvers being set up as a potential equal-but-opposite character for Chris Evans’ star-spangled icon — or, perhaps, his replacement?

One element might differentiate the two Captains, however; while Captain America was literally frozen in time, it’s possible that Captain Marvel might have abandoned Earth altogether. With the fact that the villains in her movie will be the alien race called the Skulls, it leaves open the possibility that her absence wasn’t as involuntary as Captain America’s, but instead her own choice — and that she left Earth altogether to venture into space, for some as-yet unknown reason. 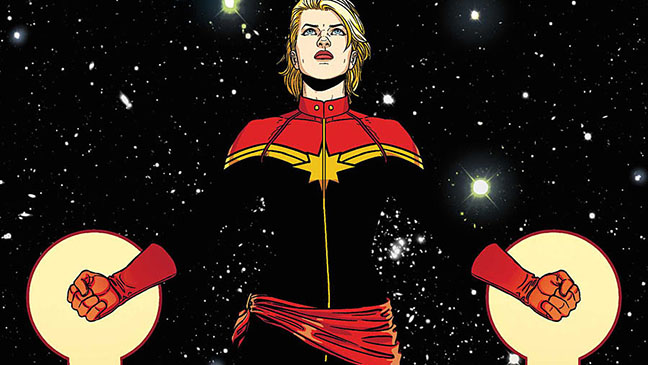 This, obviously, would allow for her to act as a connection between the Marvel Cinematic Space of Guardians of the Galaxy and the Marvel Cinematic Earth of … well, all of the other movies, in addition to the crossover of next year’s Avengers: Infinity War (and also might explain how and why she gets involved in the events of that movie, should she appear).

Beyond the importance of being Marvel’s first solo female lead, the surprising retro of Captain Marvel‘s timeframe opens up the possibility of her being an important figure in the Marvel Cinematic Universe going forward in ways that weren’t previously apparent — and someone who might just have the gravitas and experience necessary to stand up to both Captain America and Iron Man when she needs to.

That, and the potential for a killer soundtrack, of course. Could it be time for a superpowered grunge revival yet?