“Tra-la-laaa!” … It’s the somewhat non-sequitur battle cry of Dav Pilkey’s superheroic creation, Captain Underpants, who will be enjoying his film debut with Captain Underpants: The First Epic Movie on Friday. When the good Captain first came on the scene in 1997, he may have seemed a strange choice for a children’s book series. After all, the concept of a grown man running around in his underwear practically screams “stranger danger!”

However, let’s not forget that underwear has always been a fixture of classic superhero garb, resting comfortably over the tights of Batman, Aquaman and Superman — while speedo/underwear-like clothing is the main wardrobe choice for the likes of DC’s Wonder Woman and Marvel’s Namor the Sub-Mariner. The reason for this seemingly strange way of dressing can be explained by legendary DC Comics editor Julius Schwartz, according to Daven Hiskey’s The Wise Book of Whys, who said that the look was meant to mimic those of the classic acrobatic and strong-man circus performers known for their amazing feats of physical prowess.

Then, in the late 1970s, an entire generation of comic fans was able to become their favorite superheroes … at bedtime. This, of course, refers to Underoos, the matching underwear and undershirts that allowed kids to actually resemble their favorite comic book characters like Wonder Woman, Batman, Aquaman, Spider-Man, The Incredible Hulk, Iron Man and a number of other comic book icons. But other than a throwaway line from Tony Stark (referring to Peter Parker in his new high-tech Spidey suit) in last year’s Captain America: Civil War, today’s youth know little about these epic undergarments.

The brand began in 1977 from an idea by entrepreneur Larry Weiss who, as a “poor kid from the farm,” grew up reading comic books in the Chelsea, Mass. pharmacy where his Uncle Maishe worked as an assistant pharmacist.

“I had to be careful to not bend any pages or drip hot fudge from my sundae on them, because they had to be sold later,” Weiss tells Heat Vision.

Just five months shy of 80, Weiss has made his living in the world of licensing and continues to do product development and research for major companies. Among his crowning achievements: Weiss created the Cocoa Pebbles and Fruity Pebbles cereal brands for General Foods by licensing the Flintstones name for a 40-year term.

Underoos became his second licensed product, this one with Fruit of the Loom after Hanes and his financial development partner, Scott Paper, both passed on the idea. The clothing company came on board with licenses for Marvel, DC, Archie and Hanna-Barbera — and the trademark Underoos.

“I was also motivated by the Disney/Davey Crockett coonskin hat Disney licensed to someone in the 50s. Imagine, something from kid’s culture being sold all across America,” Weiss says. The name, he explains, came from a conversation he had with his 9-year-old son: “He just looked up at me and said, ‘They’re Underoos.’ I said, ‘You’re right, Billy. They are Underoos.'”

Soon, the brand was wildly popular among kids who could dress like their favorite heroes. Just check out these cringe-worthy, yet somewhat catchy commercials from 1978 and 1980:

Despite the fact that they still exist and now come in adult sizes too, (the brand has been sub-licensed out to manufacturer, BioWorld) Underoos are not as popular or widespread as they once were. Why is that? Weiss blames relatively recent focus on chasing trendy characters, rather than focusing on the classics, a trend started by a competing brand from Fruit of the Loom known as FunPals, which began in 1985.

“Fruit of the Loom hired a child marketing research specialist who destroyed the brand,” Weiss says.

After 10 years or so, Fruit of the Loom and FunPals simply gave up on trying to keep pace with these ever-changing fads, Weiss says.

“Through the years, it has become the household name in regards to any underwear that is fun to wear,” he says. “We have gotten shout-outs from The Big Bang Theory and Captain America: Civil War. What’s better than that?” 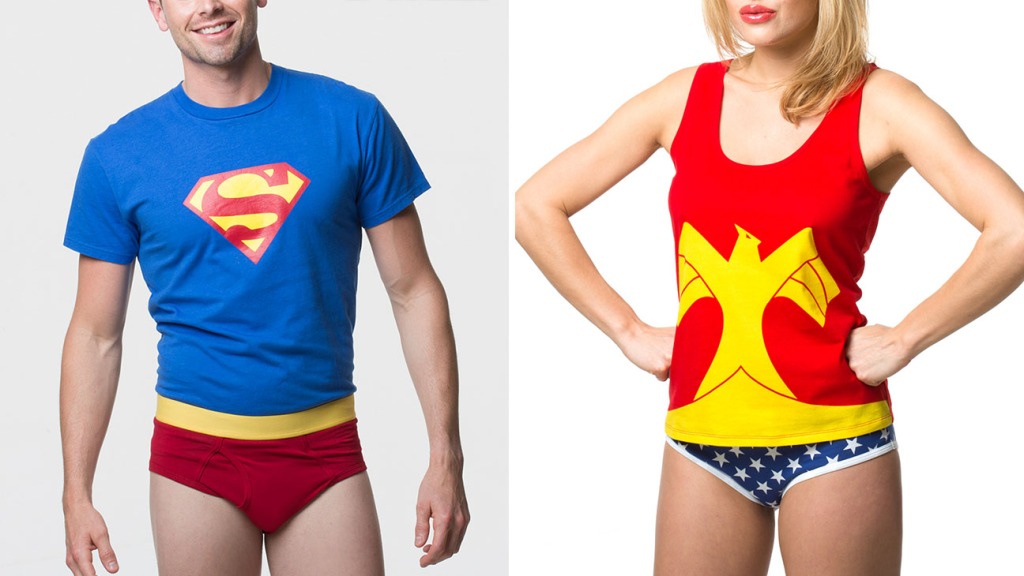 Bottaro says that Marvel, DC, and Star Wars properties continue to remain Underoo fan favorites (classic Superman and Wonder Woman are constant best-sellers) while names like Deadpool, Teenage Mutant Ninja Turtles, Paw Patrol, Minions and Harry Potter have helped to grow the brand in the intervening years since the company’s inception. Moreover, the adult division was launched due to a combination of modern geek culture, cosplay and the nostalgia of those who grew up wearing these themed garments.

“A lot of the first customers of Underoos in the ‘70s and ‘80s are now parents and are now able to embrace their inner superheroes as a family. We get a lot of nostalgic pictures of side-by-sides of our fans wearing their Underoos when they were a kid and today,” Bottaro says. Besides, he adds, there never would have been adult sizes back in 1977 given that the licensing business was so new.

And there you have it. Underwear has always been an unshakable foundation of superhero culture. Captain Underpants is merely stripping this down, reveling in a strangeness that, as it turns out, isn’t that strange after all. Still, we advise you to keep most of your clothes on whether you’re out in public or saving the world.