Universal’s The Fate of the Furious has hit the ground roaring in China.

As its opening day was still getting underway Friday, the latest installment in the Vin Diesel and Dwayne Johnson-starring action franchise was already racing into the record books.

Shortly after 7 p.m. local time, Fate of the Furious zoomed past its predecessor Furious 7‘s record for the biggest single-day ever at the Chinese box office, including previews. Furious 7, the last in the franchise to feature the late Paul Walker, earned RMB 398.9 million, or $64 million according to exchange rates in April 2015, when the film debuted (today it would be $57.9 million, due to a strengthening of the dollar).

Fast 8 has now surpassed that total in local currency terms and will continue to build on its new record as the evening in China progresses. The early estimate is that Friday’s box office will total RMB 380 million, or $55.2 million. Including previews, by the end of the day, China will have reached an estimated RMB 440 million, or $64 million.

Fate of the Furious also set a record Thursday night for most revenue earned from midnight previews, pulling in RMB 60 million ($8.7 million) to overtake Furious 7‘s RMB 52.5 million ($8.5 million in 2015; $7.6 million today). The new record is especially impressive given that Furious 7 opened on a Sunday in April 2015, placing its midnight previews on a Saturday night, while Fast 8‘s midnight showings came before a work day.

Directed by F. Gary Gray, the latest installment appears on track for an opening weekend approaching $200 million, which would set a new all-time record for a Friday to Sunday debut in China.

Reflecting the continued heavy rate of cinema construction in China, Fate of the Furious received a record 158,000 showings Friday, considerably more than the 122,000 given to Warcraft in 2016, and almost double the estimated 80,700 of Furious 7 in 2015.

Furious 7‘s China haul eventually climbed to RMB 2.43 billion ($390 million, or about $352.5 million at today’s rates), which remains Hollywood’s biggest performance in the Middle Kingdom to date, with Transformers: Age of Extinction (2014) in second with RMB 1.97 billion ($320 million). After Friday’s huge bow, Fast 8 would appear to be gunning for them both.

Since Furious 7 bowed on a Sunday, direct full-weekend comparisons with Fast 8 will be tricky. Furious 7 earned RMB 560.5 million ($90 million then; $81.3 million today) in its second weekend and first full Friday-Sunday frame.

To challenge China’s all-time box office champ — Stephen Chow’s The Mermaid, which earned an astonishing RMB 3.392 billion in early 2016 ($526.9 million) — Fate of the Furious will need a full tank of gas.

So far, word of mouth is strong. The film has a 9.4/10 user rating on mobile ticketing platform Maoyan, and 7.4/10 from reviews aggregator Douban. And Universal has pulled out all of the stops for the film’s local marketing campaign. On Thursday night, the studio lit up a 118-story skyscraper in the southern Chinese city of Shenzhen. The Ping An Finance Center — China’s second-tallest building and the fourth highest in the world — was showered in a light show featuring Fast 8 logos, racing cars and accelerating speedometers (see a snapshot below).

Until Guardians of the Galaxy Vol. 2 opens in China on May 5, Fate of the Furious‘ only U.S. studio competition will be Sony’s family-skewing Smurfs: The Lost Village, debuting next Friday. 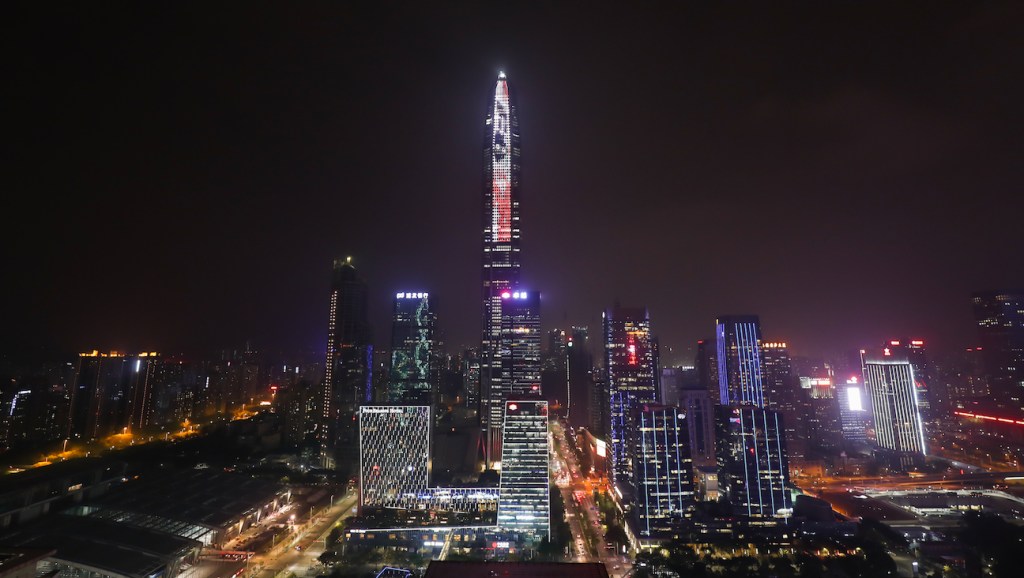