Chloe Grace Moretz, Jodie Foster, Neil Jordan and Lawrence Bender were all in attendance at the ArcLight Hollywood on Tuesday night for the Los Angeles premiere of the thriller Greta. The film stars Moretz and Isabelle Huppert as new friends whose relationship slowly spirals out of control and devolves into something far more sinister.

Moretz told The Hollywood Reporter that she was excited to make the film because she saw it as an opportunity to reinvent the ’90s-style stalker film. “It’s a genre that I love, which is thriller and horror. It was a way to take a story that reminded me of Single White Female or Basic Instinct or Fatal Attraction and subvert the genre. They cast Isabelle Huppert instead of Anthony Hopkins. Instead of the boyfriend character, it’s Maika Monroe as my best friend and that was an opportunity in this genre to subvert the tropes that you can so easily fall into, and I wanted to take advantage of that and of course delve back into horror.”

The movie is a slow-burn psychological thriller, and the onscreen chemistry between Moretz and Huppert was explosive. The story builds to a powerful and disturbing finale that had the audience holding their breath until the final frame.

Academy Award winner Neil Jordan, who directed and co-wrote the movie, told THR why Moretz was the perfect actress to star in the film. “After I began talking to her, I tried to drag as many movies as I could on the internet and I just thought she was remarkable … She had a range from when she was a very young child and I needed that. I needed somebody who could bring a character alive and be a good foil to Isabelle Huppert.”

Even the premiere of a horror film isn’t without some humor. While posing for photographers on the red carpet Jordan told them “just tell me what to do,” to which his wife cheekily replied, “That’s my job!”

It was the opportunity to work with a legendary director of Jordan’s stature that made super-producer Lawrence Bender want to be part of the team that put this film together. “The main reason I wanted to make this movie was that I wanted to work with Neil Jordan,” he told THR. “He plays the piano, he plays the sax, he’s crazily well read in the classics. He’s an artist in so many different ways. When you’re talking to someone like that as a filmmaker, you draw on so many different other aspects and areas of life and it just makes it fun and fulfilling all at the same time.”

Appropriately enough, the afterparty was held at Hollywood’s creepiest nightclub, the converted motel No Vacancy. Scenes from the movie were re-created in some of the club’s rooms and there was even an actress playing Huppert’s character who would “terrorize” the guests.

Guests ate buffalo chicken bites, sliders, grilled shrimp and beef satay, and bartenders served up glasses of Propofol Punch, a mix of champagne and raspberry liqueur, as an homage to one of the film’s most chilling moments.

However despite the party being staged in a house of horrors, Moretz, Jordan and Foster all enjoyed their evening at the VIP table, with Foster chatting excitedly with guests about how much she had enjoyed the film.

Greta will be out March 1. 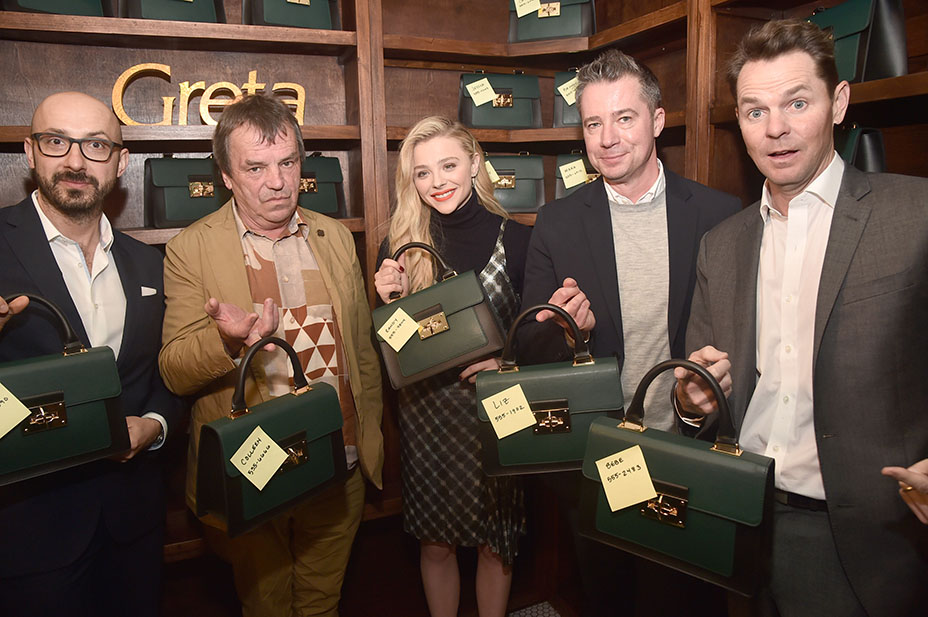