This year’s CinemaCon shone a spotlight on the sweeping changes engulfing the major Hollywood studios and their big upcoming bets, as well as offering up the usual menu of stunts and surprises — think Cher — designed to win over theater owners who are getting ready for the summer box office and fall lineup of films.

All six major studios previewed their upcoming slates for exhibitors who gather every year at Caesars Palace in Las Vegas. STX Entertainment, Lionsgate, Amazon Studios and Focus Features were also on hand, plus, for the first time, Byron Allen’s Entertainment Studios, bringing the total number of presentations to a record 11. But with the looming Disney-Fox merger, that number could drop to 10 next year as the 20th Century Fox film empire potentially gets absorbed by Disney.

In past years, the topic of premium VOD has flared up at CinemaCon, but this year the topic was barely a blip on the radar. Another controversial topic, the online subscription service MoviePass, was diffused upon word that it is altering its business plan and no longer allowing new customers to see one movie a day, but now just one per week.

CinemaCon usually convenes in March, meaning there weren’t as many summer trailers launched there this year. Instead, studios shared a slew of exclusive footage.

The Hollywood Reporter highlights below the five biggest take-aways from this year’s CinemaCon, where most of the action takes place inside the giant Colosseum theater at Caesars. 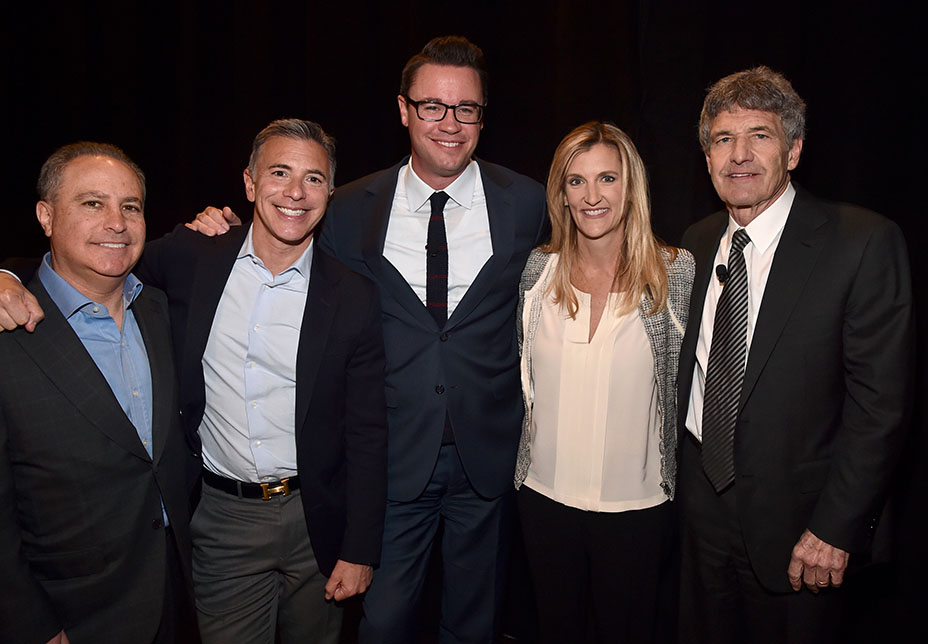 Disney’s box-office domination — which continues this weekend with the release of Marvel’s Avengers: Infinity War — was celebrated on stage on Tuesday before studio chairman Alan Horn and his team presented upcoming titles, including footage of November’s Wreck-It Ralph: Ralph Breaks the Internet (a big hit in the room) and three 2019 titles, Aladdin, The Lion King and Dumbo. But Horn didn’t address the other elephant in the room — Disney’s acquisition of a huge swath of the 20th Century Fox empire, including the storied film studio.

Two days later, in what felt like a poignant goodbye, Fox film chairman Stacey Snider choked up after pointing to Fox’s illustrious past and commitment to taking risks on a wide variety of films — a clear reference to whether the merger will cut off a major source. “In 1975, Fox rolled the dice on a rebel filmmaker [George Lucas] and came back with Star Wars,” Snider said before referencing another seemingly doomed project, Titanic. “And then came Avatar, which to this day eclipses any contender by half a billion dollars at the box office,” she said. The Fox session ran less than 90 minutes, whereas most studios take two hours. A marching band concluded Fox’s show by playing the studio’s theme song, also a first. Likewise for signage displayed throughout the hotel of the 20th Century Fox logo. Snider said she knows no more than anyone else about Disney’s plans, while earlier, Fox domestic distribution president Chris Aronson, Ryan Reynolds (dressed as Deadpool) and Hugh Jackman appeared in a video riffing on the merger. “I’m totally fucked,” says Aronson, who had overslept and was dressed in a Greatest Showman outfit. Eventually, the trio exit, and then it’s revealed that Disney’s Pluto was in the room as well.

The new power structure at Warner Bros. was also underscored as Motion Picture Group chairman Toby Emmerich hosted the studio’s CinemaCon presentation for the first time. (Warners is also facing big changes because of the pending AT&T acquisition of Time Warner.) Former marketing and distribution president Sue Kroll, who was pushed out in January, previously ran the show at Cinemacon. Warner Bros. Entertainment chairman Kevin Tsjuihara was apparently in the audience, but didn’t take the stage.

Paramount Pictures chairman Jim Gianopulos and Sony Motion Pictures Group chairman Tom Rothman — who previously ran Fox together — were both given generally high marks for their presentations as both fight to restore their respective studios to glory. Rothman’s slate earned big props from National Association of Theatre Owners chief John Fithian and others for featuring a number of titles with diverse casts.

Universal was the poster child for stability when it came time for film studio chairman Donna Langley and her executives to present its varied slate, which many theater owners predict will deliver the second-best showing of 2018 behind Disney, anchored by this summer’s Jurassic World: Fallen Kingdom.

No studio, of course, has a risk-free slate. 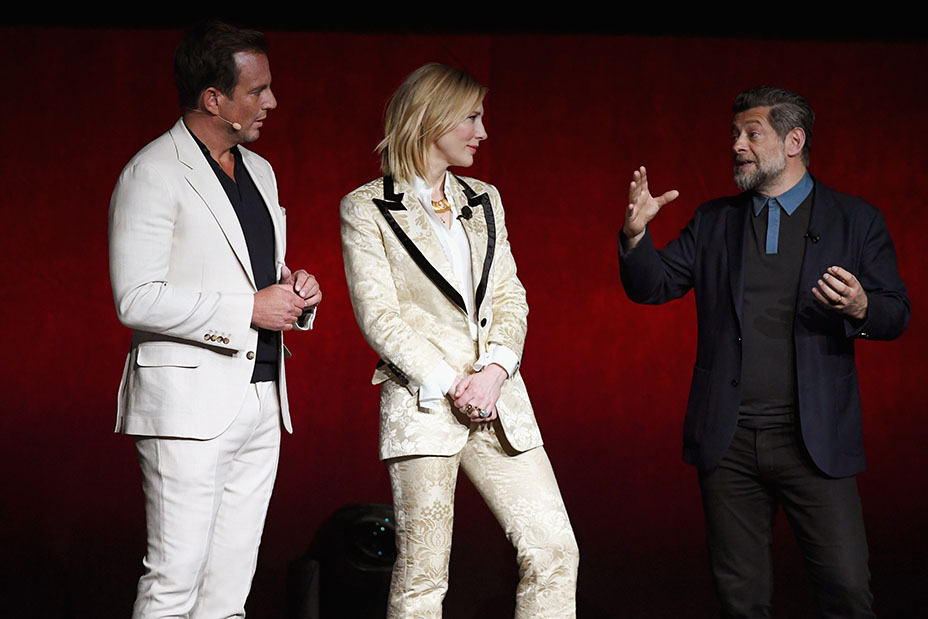 With no A-list stars, Peter Jackson’s Mortal Engines is riding on the strength of its IP’s fan base, as well as the desire to see a VFX world created by Jackson. Battle Angel, the cyberpunk epic based on the popular manga series, also has very few bankable stars. So, outside of the fans of the original, its success could well hinge on James Cameron, who wrote and is producing the movie. In other words, never bet against Cameron.

Among superhero movies, two films promoted at CinemaCon that drew mixed responses from theater owners were Sony’s Venom and Warner Bros.’ Aquaman. Venom (Oct. 5) the villain-centered Spider-Man stand-alone, is a far darker and grittier take than the younger-skewing Spider-Man: Homecoming, which played to families and fanboys alike. DC’s Aquaman (Dec. 21) remains a big question mark for fans who have yet to see a trailer for the stand-alone. (A sleek trailer-esque first look with incomplete VFX was screened at CinemaCon.)

The first spinoff in Paramount and Skydance’s flagging Transformers franchise, Bumblebee (Dec. 21), played well in the room during the Paramount’s presentation, but the female-fronted stand-alone may not play to the normal Transformers fan base. The hope is that the Travis Knight-directed feature leaves room for new fans to enter the franchise.

Warners‘ Jungle Book pic Mowgli (Oct. 19) is a darker take on Rudyard Kipling’s classic family tale that is equally as well known as a Disney property, including Jon Favreau’s blockbuster live-action film The Jungle Book. Directed by Andy Serkis, Mowgli was originally titled Jungle Book: Origins, but got a name change for obvious reasons. Serkis is certainly the master of motion capture, but it’s unclear if audiences will show up for a property that has been so fully commandeered by another studio. 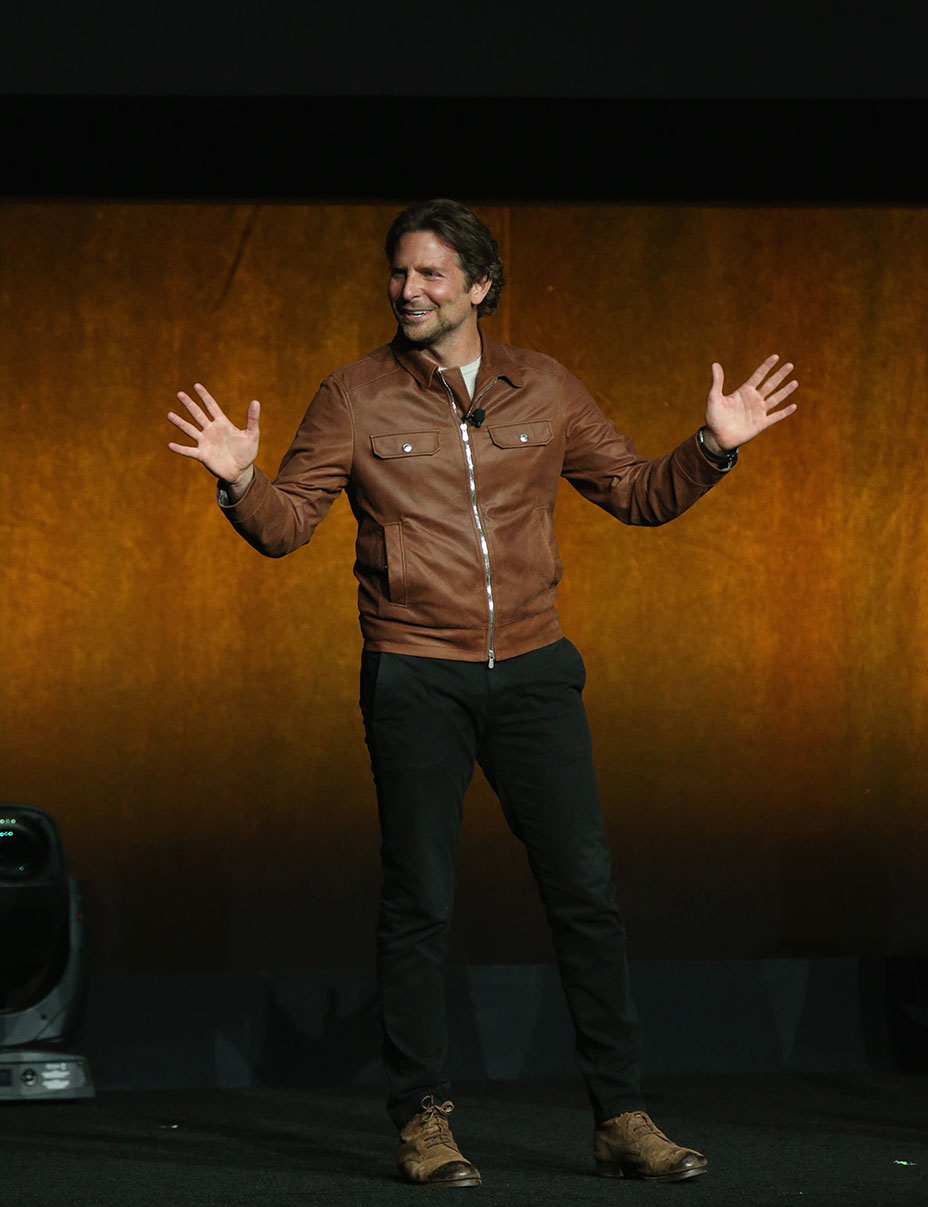 Bradley Cooper’s directorial outing A Star Is Born (Oct. 5) was arguably the biggest hit of CinemaCon after an early look at the first trailer was shown to theater owners. Cooper made the latest remake of the classic 1937 film for Warner Bros., which has moved its release from summer to the heart of awards season. Cooper, who introduced the trailer onstage at CinemaCon, also stars in the movie opposite Lady Gaga and learned to sing for his role as a country musician. Another musical-infused fall film, Bohemian Rhapsody (Nov. 2), also impressed. Rami Malek plays late Queen frontman Freddie Mercury in the biopic.

4. “Television Screens” Are Coming to Your Neighborhood Theater 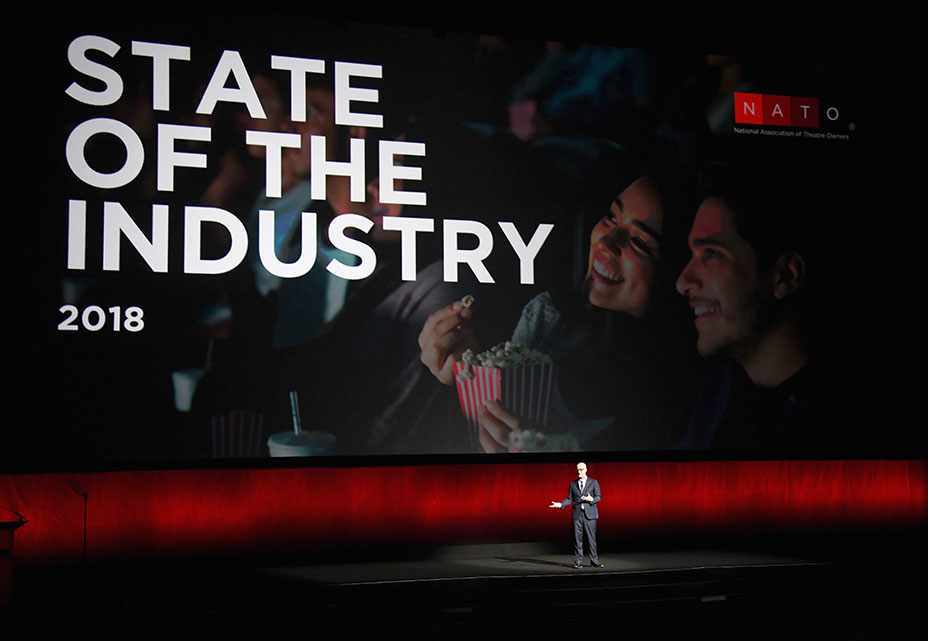 In technology circles, no topic was more debated at CinemaCon than that of a potential move to replace traditional cinema projection with LED cinema screens, which are effectively large video walls that would make projection rooms a thing of the past. “Many of the studios think LED is the best thing since sliced bread,” said Fithian, adding that others think it’s simply a giant TV screen.

Among those expressing concerns to NATO in recent weeks are some of Hollywood’s biggest directors, including Steven Spielberg and Christopher Nolan. “They told us, ‘You have to have projection. Don’t just go the way of just being television.’ Voices are coming at us from all sides,” Fithian said during a press briefing.

Proponents point primarily to the brighter picture and high dynamic range of the images. But LED walls are disruptive cinema technology with numerous and not-insignificant issues that need to be addressed. Multiple sources said the uppermost concerns among studios are the postproduction workflow and need for another version of the film if they are to take advantage of the image capabilities. Postproduction would take more time and cost more money — and that will be a issue if the investment doesn’t deliver more revenue.

And pretty much everyone watching the space is questioning the sound. Today’s theaters have a front speaker behind the screen — you can’t do that with an LED wall. Samsung just introduced one newly developed option. Sony is still working on it, though it’s planning to install a screen on its lot in Culver City.

And then there’s the cost of the screens themselves. Samsung’s screen falls in the $750,000 range — a huge investment compared with projectors. Back when the industry transitioned from primarily film to digital projection, the studios subsidized the exhibitors’ investment by paying a ”Virtual Print Fee.” But multiple sources asserted that there’s no chance that the studios would subsidize another transition.

5. Stunts and Surprises Pay Off (Mostly) 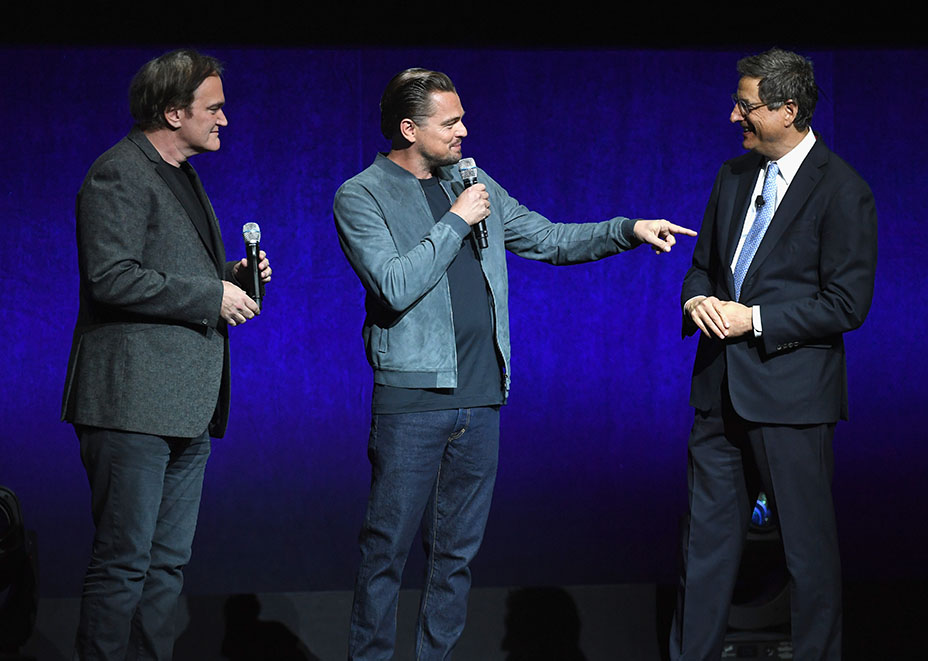 It’s an annual tradition for studios to trot out stars to pump up their presentations. The biggest applause this year — and the only standing ovation — came when Cher performed ABBA’s “Fernando” to promote her upcoming Universal film Mamma Mia: Here We Go Again! (July 20). Cher, dressed in a full glitter pantsuit and matching platform heels, sang on a raised platform behind fake palm fronds as a small armada of dancers performed a choreographed routine below her.

There was also a loud burst of applause when, during Sony’s time onstage at the Colosseum, Rothman brought out Quentin Tarantino and Leonardo DiCaprio to discuss Tarantino’s next film, Once Upon in Hollywood. (Brad Pitt and Margot Robbie are also set to star in the pic, but weren’t in attendance.)

Gianopulos drew big laughs when appearing in a spoof video that began the Paramount presentation. In the featurette, he begs an attendant to get him on a flight to Las Vegas. The airline worker in turn says there are too many vowels in his name, and compares him to a mob piece. In another snippet, Gianopulos is in the movie Titanic and trying to save the character Rose from going overboard.

One happening onstage that left theaters owners both amused and confused occurred when Mark Wahlberg and Peter Berg appeared to promote their STX film Mile 22 (Aug. 3). The duo clearly had had a few cocktails, with Wahberg repeatedly remarking about how hard Berg’s nipples were. Some things definitely should stay in Vegas, but they don’t.