To save the land that he cherished, Clint Eastwood knew he had to build some houses — not too many, but just enough. The result is Tehama, a one-of-a-kind community in the hills above Carmel-by-the-Sea on California’s Central Coast. This summer marks the listing of the final batch of Tehama lots, which when sold will cement Eastwood’s singular legacy in the region.

“We thought someone might take the land and turn it into a much more congested area or just not take care of it,” says Eastwood. “I thought, someday people are going to want some privacy and they’ll get tired of living crammed in next to each other. And that’s really it.”

A total of 90 lots are planned within Tehama, which unfolds across 2,000 acres of rolling hills above Monterey Bay (60 lots have been bought and 30 homes have been built — including Eastwood’s). The ratio of homes to acreage leaves 85 percent of the land untouched — an expanse of pristine wilderness where residents can cohabitate with deer, fox, turkey and quail. “[Clint’s] goal was to create enough development and economic value that it would become self-sustaining and people would take care of it,” says Alan Williams, Eastwood’s longtime friend and Tehama’s other mastermind.

Williams linked up with Eastwood in the ’80s during the Oscar winner’s two-year term as mayor of Carmel. Eastwood had just purchased the historic Mission Ranch to save the animal sanctuary from demolition by condo developers, and he hired Williams as a consultant (Mission Ranch is now a thriving hotel and restaurant). 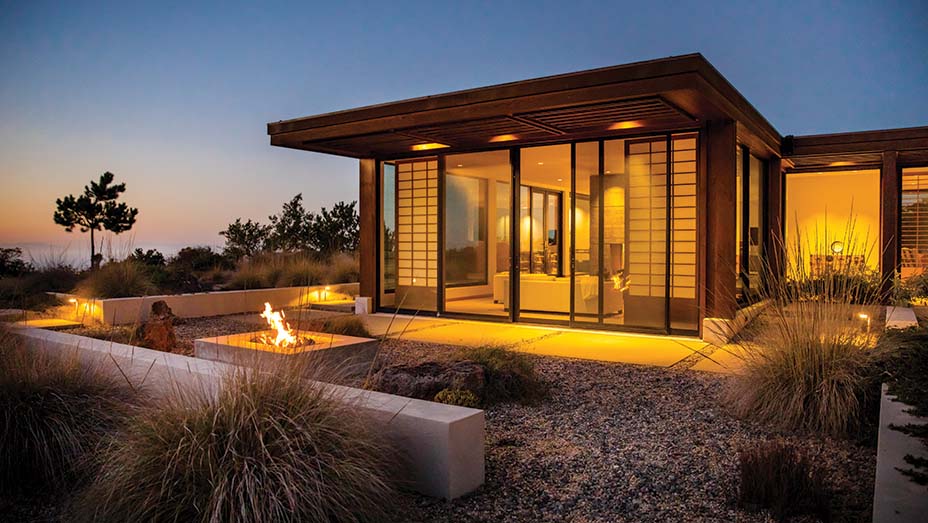 Eastwood notes some parallels between filmmaking and land-use management: “It’s like directing a film in the sense that you place things where you want them to be and then you pray — a lot. You pray that you made the right decisions and that it comes out looking how you intended it. I’m pretty confident in my decisions, but [with Tehama] I couldn’t afford to make any mistakes.”

Tehama isn’t offering turnkey homes but rather land (on a mix of open meadows, hillsides and forested areas); seven of the final 30 lots are for sale and range in price from $1.5 million to $6.3 million. Buyers can then set about building their homes within community guidelines (“There is a lot of freedom as long as the design is respectful of the site,” says Williams). Each lot guarantees total privacy, and residents enjoy access to facilities at the Tehama Golf Course, including a pool, gym and a restaurant (golf club memberships are not included).

Carmel’s real estate market has been steadily climbing the past several years, although the median selling price so far this year — $1.76 million — is down 3 percent from 2018. Compass’ Rick Ojeda, who has the listings in Tehama, says comparing the property to other parts of Carmel is like comparing the celebrity-packed enclave of Beverly Park to Bel Air. “Don’t get me wrong — they’re both great,” he says. “But one is of a different caliber.”

Eastwood, who is shooting The Ballad of Richard Jewell in Atlanta, was introduced to Carmel while filming his directorial debut, 1971’s Play Misty for Me; he named his production company Malpaso, after a local creek. The town of 3,900 is not without its throwback eccentricities. There are no street addresses, parking meters or chain restaurants allowed, and to wear heels higher than two inches requires a special permit.

Other than Eastwood, the area around Monterey hasn’t drawn a huge number of A-listers, at least not as owners. But for him, the region, Tehama in particular, is an antidote to urban life. “It’s got elbow room, and you don’t pass thousands of people on the road. Traffic actually feels like a shock when you go back to a major city,” says Eastwood. “It’s not totally rural, like being way back in the mountains. So it’s a great choice because you have everything close by. It’s really come out the way I wanted it to.”

8 Hollywood-Tested African Safaris That Give Back