The 1995 coming-of-age comedy Clueless arrived just as the wave of Jane Austen screen adaptations was cresting, finding a genius spark of inspiration in the 1815 novel Emma. Writer-director Amy Heckerling turned Austen’s meddling heroine into Beverly Hills princess Cher Horowitz, a “way prominent” litigator’s daughter with a taste for high-end designer fashion and a penchant for matchmaking and assorted other good deeds, often with no ulterior motive. The result was a sweetly self-satirizing, smarter-than-average teen movie that runneth over with quotable slangy dialogue. It also gave Alicia Silverstone a role so irresistibly effervescent she’s never found its equal; she made an unapologetically materialistic brat funny and endearing, no mean feat.

The movie’s legacy has included a TV spinoff that ran three seasons, a series of YA novels, an Iggy Azalea music video that pays homage and the publication of a 20th-anniversary oral history. Paramount also has a remake in the works. Add to that a musical that has been in development for more than a decade, with Heckerling writing the book plus lyrics to around 25 repurposed chart hits from the ’90s.

It was probably too much to hope that this recycled iteration could recapture lightning in a bottle, but the flame of originality barely flickers, leaving a show that feels only intermittently fresh, despite the commitment of a perky young cast ably captained by Dove Cameron as Cher. One or two of them look like academic peers of Luke Perry on Beverly Hills, 90210, seemingly held back for a decade or more, but whatever. 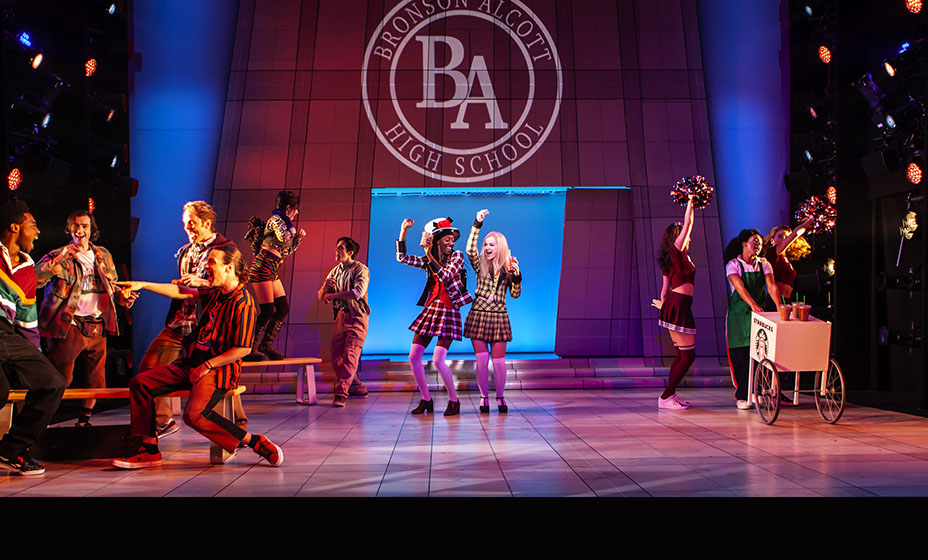 Presented by off-Broadway’s New Group, the show reteams director Kristin Hanggi and choreographer Kelly Devine, who know their way around era-specific jukebox musicals from their work on the ’80s hair-metal assembly Rock of Ages. It’s cleverly designed, with a set by Beowulf Boritt dominated by a freeway of ribbon in plaid — one of Cher’s signature style choices, duh — that also evokes a strip of celluloid, with doors, windows and an overhead compartment for the six-piece band opening up in the rear wall. And Amy Clark’s costumes tip their hat to Mona May’s memorable outfits from the film.

How much you get out of the show will depend on your appetite for ’90s nostalgia. Judging by the big laugh generated by the wheezing gurgle of vintage dial-up internet, for some audiences that might be enough. Likewise hearing songs like Crash Test Dummies’ “Mmm Mmm Mmm Mmm” reworked as a singalong sobriety epiphany for skateboarding stoner Travis (Will Connolly); “Bye Bye Bye” as a revelation of the sexuality of transfer student Christian (Justin Mortelliti), complete with *NSYNC dance moves; 4 Non Blondes’ “What’s Up” co-opted to express Cher’s ADD anxiety during her driving test; or New Radicals’ “You Get What You Give” spun into an anthem for grassroots environmental activism.

Some of this is genuinely witty, even if Heckerling’s new lyrics are groaning with false rhymes and at times sit awkwardly on the melodies. But I found it all hit-or-miss, more Filene’s Basement than Fred Segal. Or more of a roughly stitched patchwork of second-hand elements than a show with its own organic cohesion.

While the musical reclaims only two songs prominent on the movie’s soundtrack — The Muffs’ cover of “Kids in America” and Jill Sobule’s “Supermodel” — it does stick closely to the original’s plot. 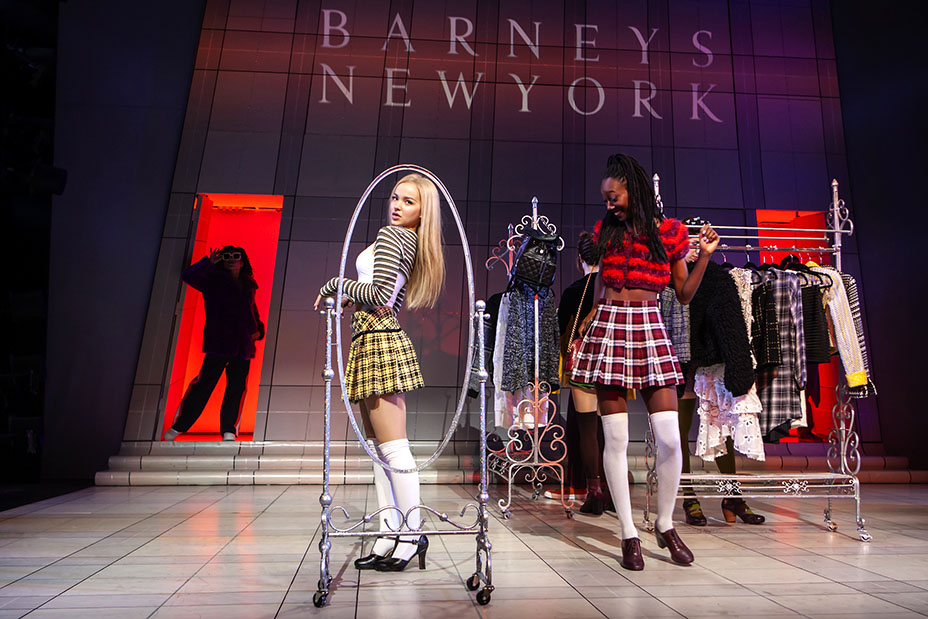 Cher and her bestie Dionne (Zurin Villanueva), “both named after famous singers of the past who now do infomercials,” attend Bronson Alcott High School, where they hang with the other well-heeled, fashionable kids. Dionne has a tempestuous relationship with Murray (Gilbert L. Bailey II, bringing killer dance moves), despite her distaste for his baggy, low-rider pants and misogynistic modes of address. But Cher is mostly too busy with other projects to think about her lingering virginity. Those include playing cupid to teachers Miss Geist (Megan Sikora) and Mr. Hall (Chris Hoch) as a stepping stone toward negotiating her C in debate up to a higher grade.

A seemingly more noble mission arises when sartorially challenged new kid Tai (Ephie Aardema) arrives, in desperate need of friends and a makeover. Cher and Dionne adopt her, attempting to steer her away from Travis and into the arms of cocky record company scion Elton (Brett Thiele, nailing the slick sense of superiority). That doesn’t go according to plan, but as Tai’s popularity grows she becomes obnoxiously overconfident, ruffling Cher’s feathers for reasons she can’t articulate when Tai sets her romantic sights on Josh (Dave Thomas Brown). The son of a woman to whom Cher’s widowed father was “hardly married,” Josh is the classic babe that no one notices is hot under the geek glasses.

The show hiccups along finding more mileage in some scenes than others until, in the comedy-of-manners style borrowed from Austen, Cher arrives at the stunned realization she’s been wrong about everyone and everything, including herself. She’s buggin’. At the same time, the less superficial Josh comes to grips with his attraction to her, in a riff on Joan Osborne’s “One of Us,” wondering, “What if Cher didn’t have a trust/ Just a slob like all of us?” 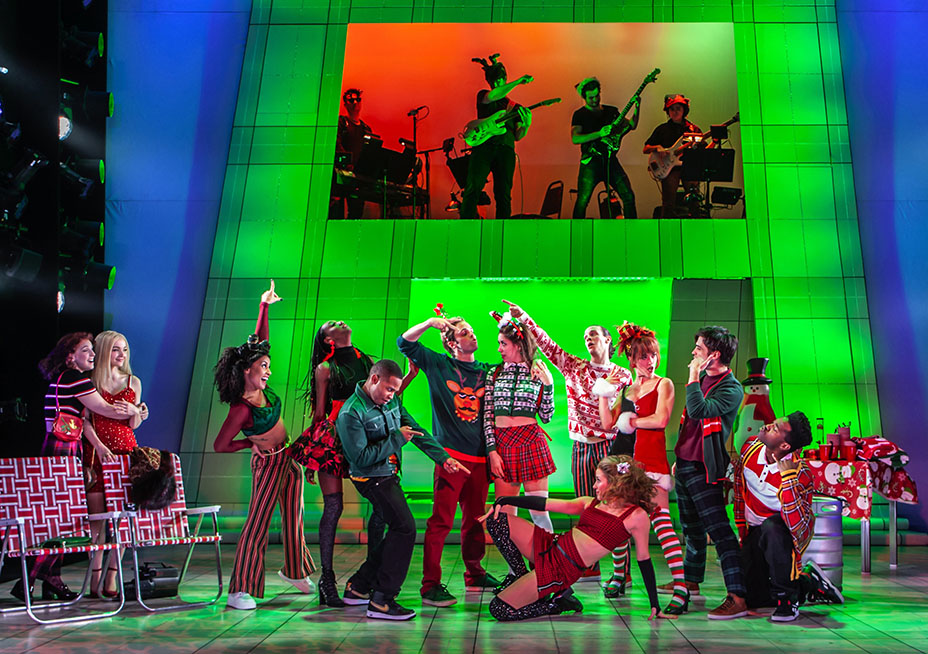 This is all moderately engaging, with numbers that dip into the dance vernacular of music videos of the time, but there’s little element of surprise. Even in comparison to other teen classics retooled for the stage, like Mean Girls, Heathers: The Musical or Bring It On, the show rarely steps out from the shadow of its screen source with anything new to offer. Heckerling revealed her sharp ear for the idiomatic speech of Southern California youth in both Clueless and Fast Times at Ridgemont High (the latter directed from Cameron Crowe’s script), but here she simply rehashes much of the best dialogue from the movie to lesser effect. Where she tweaks a line or two, the jokes often feel more forced. And the ersatz hits collection is no substitute for an original score, with several of the numbers poorly integrated.

This is no fault of the appealing cast, many of whom, like Aardema, Connolly, Bailey and Brown, bring their own quirks to the familiar characters. The dependable Sikora is amusing as daffy idealist Miss Geist, doubling in the smaller part of P.E. teacher Miss Stoeger. In the male adult roles, Hoch is best as Cher’s scary father, while his shtick gets a tad broad as Mr. Hall and the DMV instructor who fails Cher on her driving test, condemning her to remain a child according to the strict social laws of L.A. teenhood.

As for Disney Channel discovery Cameron, she’s cute enough in her New York stage debut, carrying the show and often calling to mind a baby Kristin Chenoweth in both her look and her pretty upper-register vocals. If Devine’s tendency to place her on the sidelines or in back in ensemble numbers suggests she’s not the most assured dancer, she gets by. Cameron doesn’t measure up to the light throwaway delivery of Silverstone, who managed to seem simultaneously innocent and in on the joke, but that’s as much to do with the second-hand material as anything lacking in the performance. Clueless, The Musical is not completely heinous, but no one’s ever going to call it a total Betty, either. It almost makes you miss Stacey Dash.