Several months after the #MeToo movement swept the entertainment industry, attendees entering the 2018 edition of San Diego Comic-Con didn’t know how, if at all, the event would respond.

Comic-Con’s straightforward code of conduct remains the same in 2018 in condemning misconduct as it did in previous years, noting vaguely that “harassing or offensive behavior will not be tolerated.” Ahead of this year’s event, Comic-Con isn’t saying whether it made any changes to security, as it guards specific details “to ensure the safety of attendees,” the event said in a statement to The Hollywood Reporter. And as several reporters noted, the movement was not mentioned in SDCC programming director Eddie Ibrahim’s annual opening speech.

Comic-Con’s lack of response to the #MeToo movement stands in stark contrast to many large, entertainment industry-adjacent events that have released addendums to their previous codes of conduct or have put forth other measures to ensure the comfort of their attendees in the wake of the wave of sexual harassment and assault allegations that has hit Hollywood over the past year.

At this year’s Cannes Film Festival, for example, pamphlets were handed out in the gift bags of festival attendees upon check-in that included a hotline number for people to report sexual harassment or misconduct. The Sundance Film Festival updated its code of conduct for the 2018 event, stating, “Sundance Institute is committed to allowing attendees to experience the Sundance Film Festival free of harassment, discrimination, sexism, and threatening or disrespectful behavior.” A 24-hour hotline was also established in partnership with the Utah Attorney General.

Like Sundance and Cannes, and festivals that came before them, Comic-Con has long hosted and welcomed men recently accused of sexual misconduct, including Talking Dead host Chris Hardwick, Ain’t It Cool News founder Harry Knowles and Honest Trailers creator Andy Signore. After AMC replaced Hardwick on its panels with Yvette Nicole Brown and DEFY Media terminated Signore, the two men are not attending the event this year; Knowles has stepped away from Ain’t It Cool News since he was accused of sexual misconduct. Unlike more awards- and independent film-centric gatherings, however, Comic-Con also hosts a significant number of costumed attendees and cosplayers who are at high risk for harassment, groping and other misconduct while in costume. 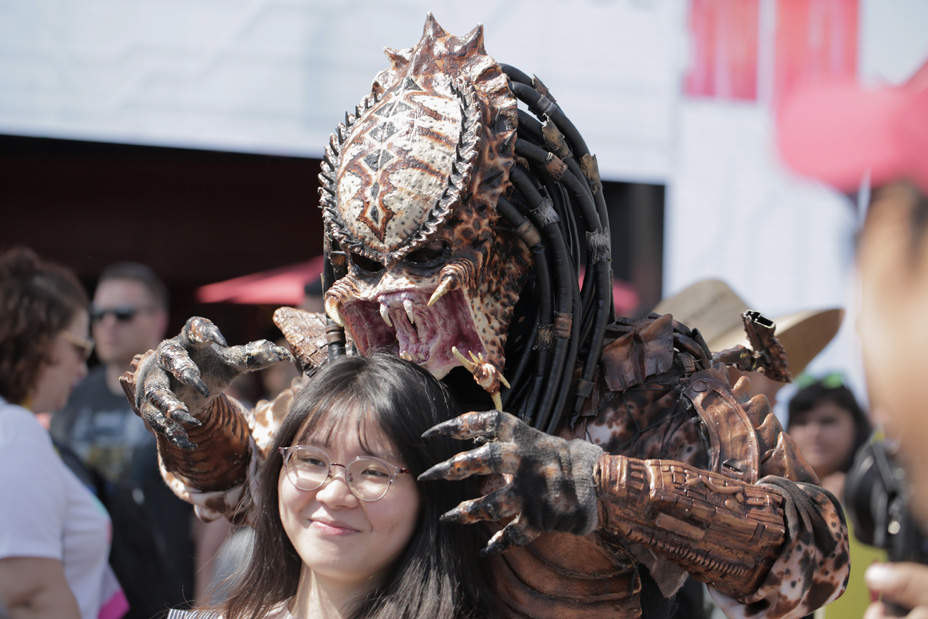 In 2014, the movement “Cosplay Is Not Consent” sought to tamp down on some of that misconduct. “The whole concept is that just because [cosplayers] are wearing a costume doesn’t mean you can treat them as a strange fantasy object,” says Stella Chuu, a popular cosplayer known for her renditions of Overwatch’s Pharah and Madoka Magika’s Homura. “Cosplay Is Not Consent is a movement that is trying to promote asking for permission and starting an actual dialogue with the cosplayer instead of treating them like a statue at a convention.”

However, new controversies within the community since #MeToo show that the reformation of the fan-cosplayer relationship is still ongoing. In late June, years-old allegations of sexual misconduct involving Anime Matsuri’s CEO John Leigh resurfaced, resulting in a “Boycott Anime Matsuri” movement, and this month, cosplayer Mariah Mallad faced widespread allegations that she inappropriately touched strangers and acquaintances at Cons.

Nevertheless, cosplayers on the ground in San Diego say the community is able to police itself, with harassers being outed and forced out of events. Attendees abide by their own code of conduct, a practice initially formed out of necessity and now codified into Con practice — like asking for pictures before taking them and respecting physical boundaries.

“You see it sometimes that people are trying to get at you, but you make sure that people are with you at all time,” says one woman cosplaying a Poison Ivy and traveling with a Starfire, Domino, Batgirl and Harley Quinn. “We roll together as a group. But if you are singled out, it makes you seem more vulnerable, even if you are not a vulnerable person.”

Asked whether the event should institute a new or revamped code of conduct, many are ambivalent. “They totally could, but I don’t think it’s necessary here,” says a Catwoman.

While there is the expected unwelcome touching — “Even getting out of the shuttle the driver gave me a weird arm touch,” says a costumed Harley Quinn — the cosplayers are quick to note that, overall, they do feel safe at the convention.

“I have never felt unsafe in any situation here. That is why I like this Con, because the community is here to support you and make you feel safe,” a woman playing Batgirl says.

Though Comic-Con doesn’t seem keen on directly addressing sexual harassment, the San Diego Convention Center, which hosts the Con, has an anti-harassment policy that was updated in May. President and CEO Clifford “Rip” Ripptoe says that it is available to staff on its employment portal and via the Human Resources Department. Employees additionally go through “Respect the Workplace” training when they begin their jobs and periodically throughout their employment. SDCC staff operate the convention during Comic-Con and provide security. (Comic-Con also works with the San Diego Police Department, other law enforcement and a security management company that employs security companies from around the area on its security measures.)

“We have a zero-tolerance policy for harassment,” Ripptoe says. The San Diego Police Department did not respond to multiple requests for comment from THR.

The #MeToo movement hasn’t totally passed Comic-Con by, says Chuu, who notes that the movement has resulted in cosplayers being more vocal about people making them uncomfortable. However, she cautions, the wave of allegations and firings that have resulted from #MeToo may not dissuade perpetrators of misconduct from continuing to act.

“Until people call [perpetrators] out specifically, they’re going to think they’re safe and invincible,” Chuu says. “The cosplay scene is full of yes men, we’re all narcissists, we’ve all got that personality type, and we love to build people up, we love to tell each other how amazing we are.”

On the Ground at Comic-Con: Inside the Activation Hits (and Misses)

How SXSW, Comic-Con Fueled the Rise of Activation Culture