The story of how Crazy Rich Asians made its way from a hit book series to the first studio movie featuring an all-Westernized Asian cast in 25 years was revealed in The Hollywood Reporter‘s Aug. 1 cover story. But there are several more anecdotes from the cast and creatives about their adventures on- and off-set in Singapore and Malaysia that didn’t make it to print.

Ahead of the film’s opening Wednesday, Aug. 15, THR reveals seven new stories from the making of the romantic comedy.

What a Chu-incidence
Chu has said that he relates to his film’s heroine, an Asian-American discovering her cultural identity. Little did he know how much he had in common with her. Kevin Kwan’s 2013 novel Crazy Rich Asians contains a reference to Rachel Chu’s extended family in Cupertino, California, and a cousin who made it big in Hollywood making movies. As it so happens, the director’s family also hails from the Bay Area, a coincidence that he pointed out to Kwan when the two finally met for the film project. “Kevin’s like, ‘No, I am talking about you,'” Chu says.

As it turns out, Kwan was very good friends with Chu’s New York-based cousin Vivian, who often spoke fondly of her family back west. When all three finally came together for Chu’s July 27 wedding, Kwan reflected on the moment in an Instagram post: “More than ten years ago, my dear friend Vivian in New York started telling me stories about how she grew up in Northern California amongst all her cousins… her stories inspired me when I created the character of Rachel Chu and her family,” he wrote. “I never dreamed that [Jon] would one day direct the film based on my book, a film with a heroine who is inspired by the women in his own family.”

More than ten years ago, my dear friend Vivian in New York started telling me stories about how she grew up in Northern California amongst all her cousins and how close knit they all were. As I moved to the US when I was eleven and had to leave behind my closest cousins, I was fascinated by the stories of her cool American-Born Chinese family, so different from my own, and her stories inspired me when I created the character of Rachel Chu and her family. Jon M. Chu, the director of “Crazy Rich Asians,” was one of the cousins Vivian had been talking about for so many years. I never dreamed that he would one day direct the film based on my book, a film with a heroine who is inspired by the women in his own family. Last night, it all came full circle in this photo – the first time Vivian, Jon, and I were all together in one place.

“There were so many different weird little things that gave us signs that [this production] was destiny,” Chu adds. For instance, after The Joy Luck Club was released, his family won an auction to have dinner with an actress from the film. That actress turned out to be Lisa Lu, who 25 years later portrays Nick’s grandmother in Crazy Rich Asians. A year or two later, when Chu was 16, he traveled with a performing arts troupe to the Malaysian state of Sarawak to perform for members of the Iban tribe — the very same ethnic group his future leading man, Golding, hails from.

Not to be outdone, Crazy Rich Asians‘ co-screenwriter Adele Lim was touring the set of Tyersall Park, the Young family estate, when she experienced a sense of deja vu. “It’s a beautiful old colonial bungalow, and I said, ‘You know what? This looks like the place I got married in,'” she says. (It was.) “It felt so much like things were coming full circle.”

When the cast first arrived in Kuala Lumpur, they participated in a dumpling-making session as both an ice breaker to get to know each other and a skill they needed to know for the movie they were about to shoot (there’s a scene in which the family makes dumplings together while Yeoh’s Eleanor Young makes it clear that family should be Rachel’s top priority). “There’s a scene in the film, so we all needed to roughly know what we were doing,” says Gemma Chan. “I’d never made dumplings before. It got quite competitive.”

Chieng, a correspondent on The Daily Show, first heard about Crazy Rich Asians from an article in late 2016 that mentioned that Chu was looking for actors who had the authentic accent of those living in Singapore and Malaysia. “I called my agent and said, ‘If you can get me an audition, I swear I can book this one,'” says Chieng, 32, who grew up in Singapore and Malaysia. “In fact, this is the only one I can book, because there’s no other movie that’s going to ask for this kind of accent.'” When he first met with a casting director in Australia (he auditioned for the roles of Eddie and Bernard), he really focused on using the Singaporean accent. “The way Singaporeans talk is they use less words,” he says. “The casting director would be like, ‘Hey, you missed a word here.’ And I said, ‘Yeah, I know, but Singaporeans wouldn’t say this word.’ Then she just let me do that.”

Nico Santos’ Fake Cantonese Does Not

The Filipino-American Superstore actor, who plays Nick’s snarky but kindhearted cousin Oliver, was on the flight to Malaysia when he got a surprising email from the production: “Hey Nico, excited to have you onboard! By the way, this is the audio file for your Cantonese line.” That Oliver delivers a zinger in Cantonese during the film’s aforementioned dumpling scene was news to Santos, who only speaks English and Filipino.

The line’s enough of a doozy in English: “Because Auntie Felicity was getting after-school microdermabrasion.” Santos dutifully worked with a dialect coach to get the pronunciation right, but Cantonese’s tricky reliance on tones (there are nine in total) had the actor continually changing the meaning in a crucial yet hilarious way. “Depending on how I say it, mo pay is ‘touch’ instead of ‘scrub,’ and I guess I was making it sound kind of suggestive,” he says with a laugh. “In the end they ended up using the English take, but that is the kind of preparation I had to do for this role!”

They Love Karaoke
Most of the main cast remained in Singapore and Malaysia for the entirety of the shoot, which meant they spent many nights going out to dinner together and often to karaoke. “[Producer] Nina Jacobson’s a big fan of karaoke,” reveals Golding, who, along with Chieng, handled tour guide duties as the two locals in the primary cast. So who was the best crooner? “Listen, all of us are good at karaoke, so when you come karaokeing with a CRA crew, you’d better step up,” says Santos, who plays Oliver. “But do you know who’s also really good at karaoke? It’s Ronny Chieng — he sang this one Ariana Grande song all the time, and I’m like, ‘Ronny, didn’t peg you for a Ariana Grande fan.’ He’s very serious and intense, and he’s almost angry when he’s singing the song, but he’s really good, and it’s really fun to watch him.”

Awkwafina’s Improv Created Peik Lin
Awkwafina, recently seen in Ocean’s 8, plays the hilarious Peik Lin (Rachel’s best friend) in Crazy Rich Asians. While the character is a popular one in Kevin Kwan’s book, Awkwafina says Chu let her create the character the way she wanted to play her, which involved a lot of improv. “I don’t know what the hell I was doing,” says Awkwafina, 29. “She at times goes into this Southern accent because that’s what I do when I’m nervous. One of the lines that I say at one point, like, ‘Yeah, yeah, I’ll fucking come to dinner’ — that was an improv take that I immediately apologized for.”

Nico and Jimmy’s Homecomings
After they had wrapped shooting in Malaysia, most of the cast moved directly to Singapore for three more weeks of shooting. But Santos added a side trip to the Philippines — his first visit in 21 years. The Superstore star was born in Manila but moved to the U.S. when he was 16. “I got reunited with my nanny in the Philippines, and it was a really sort of like, crazy, emotional experience,” he says. “It’s really amazing to be back home.”

Yang had a similar experience at the end of the shoot. At the time when Crazy Rich Asians was shooting, the Silicon Valley breakout was writing his book, How to American, which chronicles his move at the age of 13 from Hong Kong to the U.S. and his journey into the world of comedy. But it was the experience of shooting Crazy Rich Asians that helped him find the ending for his book. “When you are in America, at least for me, as an immigrant, I try to be as Americanized as I could. I just want to be an actor, I don’t just want to be an Asian actor necessarily,” says Yang, 31. “But after this movie, I’m like, ‘Dude, this is so awesome, man; I met all these beautiful, talented people. I want to be more of a part of this.'” After he wrapped the film, he flew his parents to Hong Kong and met them there for a weeklong trip —  his first time back since he was 13. “Then I was able to write the ending, because that’s when it came back full circle.”

Constance Wu Says the Asian Movie Stars Are Out There
Finding the right actor to play Nick Young involved a down-to-the-wire global search. Chu discovered Golding, a travel host, after auditioning tons of actors from around the world. It’s Golding’s first movie role (he’ll next be seen in Paul Feig’s A Simple Favor), and a breakout performance for him, but Constance Wu says there are other talented actors of Asian descent waiting to be discovered out there. “People so often, say, ‘Oh my gosh, I want to cast more Asians, but it’s so hard to find them.’ It’s not.” Wu, who says Henry Golding is “fantastic,” reveals that she tested with “a bunch of other guys who were fucking amazing.”

“So I think it’s kind of an insult to say that they don’t exist,” Wu adds. “Maybe they don’t have a lot of credits, or any credits, on their resume, but that’s because they haven’t had the opportunity to build those credits. There are other good ones. You just have to seek them out.” 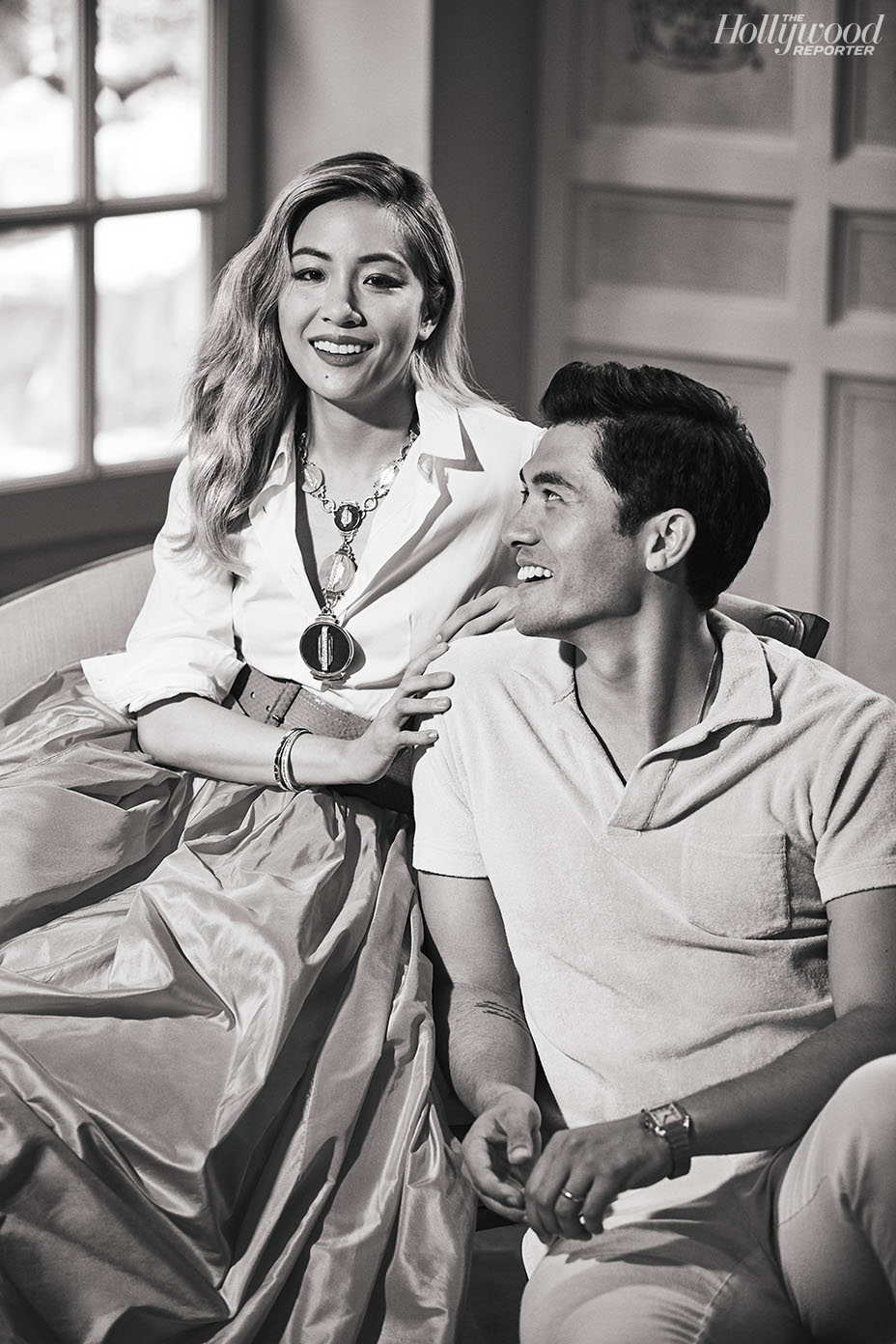