THE WOLVES, MEBH AND ROBYN

Set in Ireland and bathed in mythology, Cartoon Saloon’s hand-animated Wolfwalkers follows an English girl, Robyn Goodfellowe, who befriends Mebh, a member of a tribe rumored to have the ability to transform into wolves. To design Mebh and Robyn’s wolf forms, the team, led by two-time Oscar-nominated director Tomm Moore and Ross Stewart, started with a “generic” wolf and aimed to reflect each girl in her wolf persona. “The central choice we decided on since the beginning was to keep the eyes the same as their human form, both in shape and color, with some minor adjustments,” says character posing artist Federico Pirovano. “The eyes are the mirror of the soul, it is said, so that was an effective, easy choice.”

British Independent Film Awards: 25 Years of Being "Trendsetters," "Guinea Pigs" and Giving Early Honors to Florence Pugh, Letitia Wright (and Many, Many More)

Pirovano adds that size and shape made each of the girls’ animal forms distinct. “Mebh Wolf is smaller but thicker and stronger looking, with round shapes, short snout and big paws. Robyn Wolf, on the contrary, is slimmer and more elegant, with more acute angles,” he says, explaining that color also was used to make them recognizable. “Mebh has a warm orange-brown color similar to her wild red hair, and Robyn a light gray that somehow just felt right, probably for her purity.” 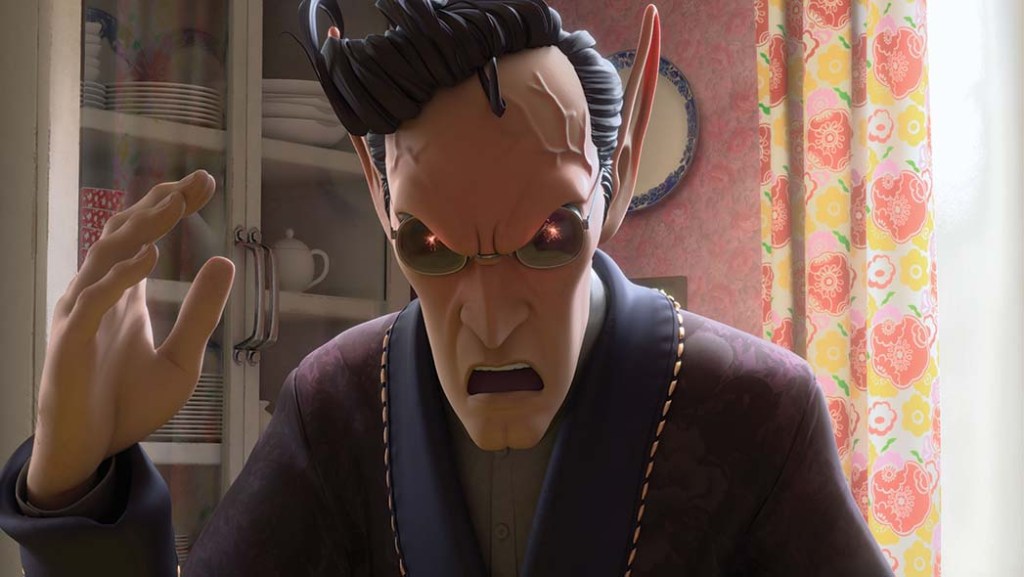 Earwig and the Witch (GKIDS)

The Mandrake, voiced by Richard E. Grant in the English-language version, is a grumpy character who despises people and can quickly get angry and out of control. “I felt that he had reasons why he turned out that way,” says the director, speaking through a translator. “Perhaps he was naive, delicate and vulnerable, or something happened to him that made him closed off to others. For example, he experienced betrayal from someone he trusted.”

Several design elements reflect his personality. “I gave him a broad forehead to indicate his high-strung nature, a slouch that turned his back on society, and thick glasses to hide his emotions. His long, pointy ears that look like horns were an element in the original book [by Diana Wynne Jones], but I think large ears symbolize that even though he hates people, he is always concerned about what people are saying.” 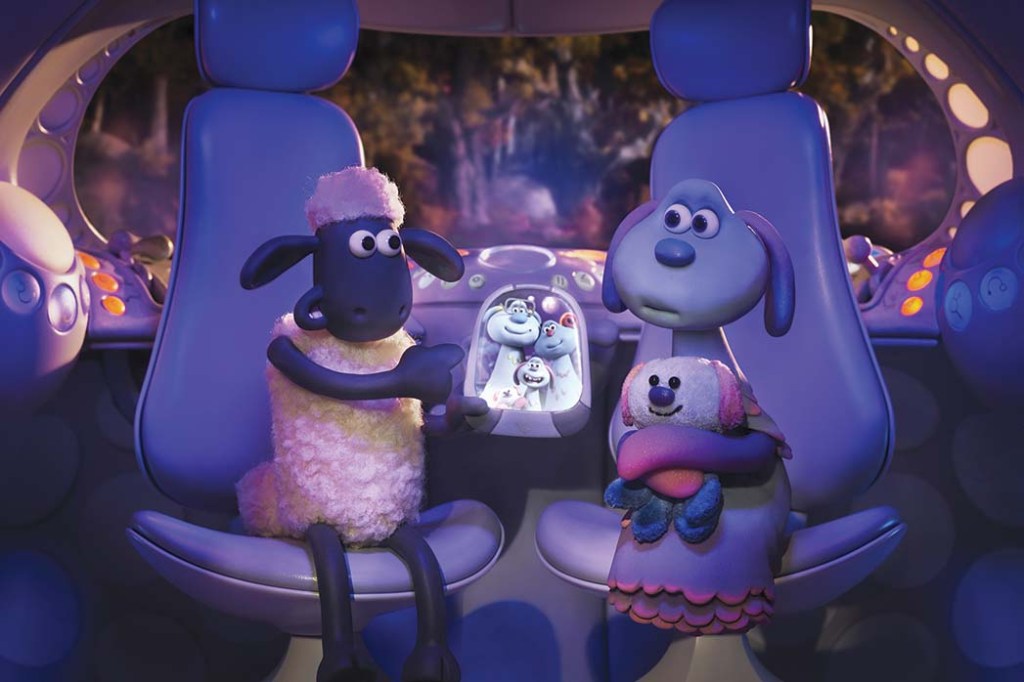 Directors Richard Phelan and Will Becher introduced a new character, a young alien named Lu-La, for Aardman Animations’ latest Shaun the Sheep adventure. “Tapping into elements of classic UFO folklore really inspired the overall look of Lu-La’s design. In silhouette, her head resembles a saucer-shaped UFO, while her body is more triangular, like a tractor beam,” says Phelan. Adds Becher, “Her eyes and brow were particularly important for that emotional connection with the other characters — and our audience — and we decided to work with the most expressive of all the materials we use at Aardman, modeling clay.”

The pair also treated Lu-La as an innocent child and supplied her with qualities that signal she’s not from Shaun’s world. “The blue and fluorescent coloring gave her a slightly otherworldly edge, which was inspired by early concept art exploring the color palette of deep sea creatures,” Phelan says, noting that her ears have actual pieces of glitter inside them. “Our model-making team experimented with different types of glitter nail varnish to find the perfect mix. Early on in the story, Shaun also discovers that Lu-La glows when she’s happy, so we researched lots of bioluminescent fish to find the right look.” Her sense of curiosity is conveyed in the way that she leans forward to look at things. “She’s ever so slightly off-balance,” Phelan says, “like she hasn’t quite got the hang of walking yet.” 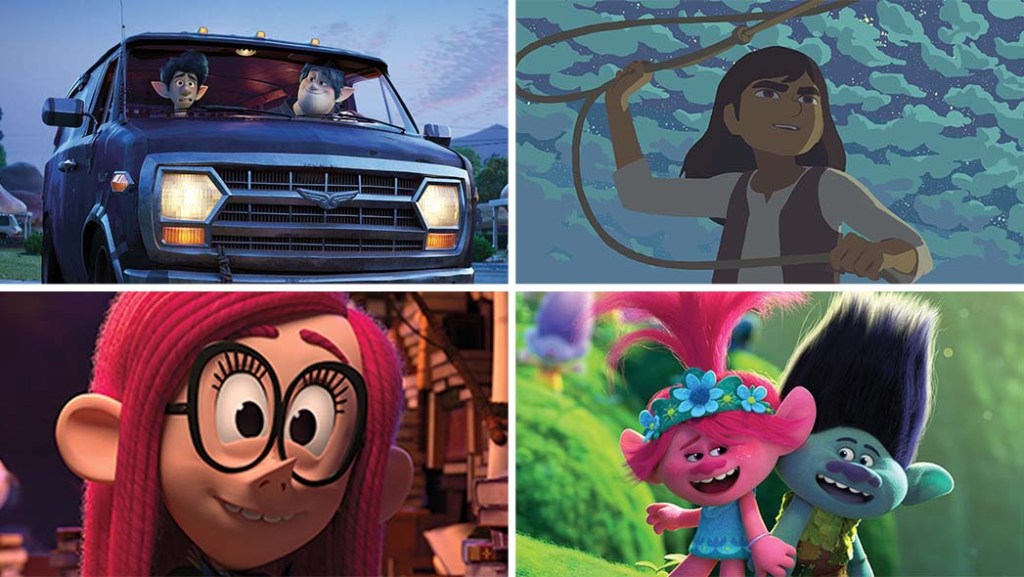 Last year, Netflix earned two Oscar nominations in the animated feature category, signaling that streaming would become a force in this area. That burgeoning trend has only been amplified this year, with contenders from streaming platforms having unexpected impact (as has the COVID-19 pandemic) on planned theatrical releases.

One notable streaming premiere was Disney+’s Christmas debut of Soul. The film could bring a notable distinction to Pixar chief creative officer Pete Docter, who teamed with co-director Kemp Powers (both also share screenplay credit with Mike Jones). Docter has three previous Oscar nominations and two wins (for Up and Inside Out), and a Soul nomination would give him a record fourth category nom; a victory, meanwhile, would make him the only filmmaker with three Oscars in the category.

Pixar also has Onward, directed by Dan Scanlon (Monsters University), in the race; that film was released in cinemas March 6, just before many theaters shut down because of the virus; it went to VOD the next month.

Universal and DreamWorks Animation’s Nov. 25 release of The Croods: A New Age — director Joel Crawford’s sequel to the studio’s Oscar-nominated prehistoric comedy — made it the first studio animated feature to be released in theaters amid the pandemic (it went to PVOD on Dec. 18). DWA’s contenders also include the musical Trolls World Tour, which had a limited theatrical release and simultaneous VOD bow on April 10.

Wolfwalkers, which debuted Dec. 11 on Apple TV+, is also part of a GKIDS Films lineup that includes Earwig and the Witch; Ride Your Wave, from director Masaaki Yuasa; Lupin III: The First, helmed by Takashi Yamazaki and based on the Monkey Punch comic books; and On-Gaku: Our Sound, written and directed by Kenji Iwaisawa, based on the manga by Hiroyuki Ohashi.

Netflix has five contenders in the race, including Over the Moon, a Glen Keane-directed fantasy co-produced with China’s Pearl Studio. Disney legend Keane designed Ariel in The Little Mermaid and was the supervising animator of title characters in Beauty and the Beast and Aladdin. More recently, he and Kobe Bryant landed a 2018 animated short Oscar for Dear Basketball. The streamer’s lineup also includes Shaun the Sheep: Farmageddon; Bombay Rose, an India-set love story written, directed and edited by Gitanjali Rao; The Willoughbys, based on Lois Lowry’s book about a family of neglected children; and Japanese anime feature A Whisker Away.

Contenders also include titles that have earned festival recognition. Among them: Calamity Jane (distributed by Shout!), from filmmaker Rémi Chayé (Long Way North), which won the top prize for a feature at the Annecy International Animation Film Festival; Kill It and Leave This Town, a hand-drawn feature from Polish animator Mariusz Wilczynski that took the Special Jury Award at Annecy and the Grand Prize for an animated feature at the Ottawa International Animation Film Festival; and No. 7 Cherry Lane, a hand-drawn film from Hong Kong director Yonfan that won best screenplay at the 2019 Venice Film Festival. — C.G.