James “Whitey” Bulger — the notorious crime boss who was killed by fellow inmates in 2018 in West Virginia while serving two consecutive life sentences for 11 murders — inspired many a Hollywood project.

Most notably, Johnny Depp played him in the 2015 Scott Cooper-directed biopic Black Mass, while Jack Nicholson played a version of him as Frank Costello in Martin Scorsese’s Oscar winning The Departed. He is also said to have inspired characters in shows like Ray Donovan, The Blacklist and Brotherhood. So, what did Bulger think about Tinseltown’s fascination with his crime-dominated life?

Casey Sherman and Dave Wedge’s just-released new book, Hunting Whitey: The Inside Story of the Capture & Killing of America’s Most Wanted Crime Boss (William Morrow Publishers; Gotham Group for film and TV rights) answers that question among many others about the life and crimes of Bulger. The Hollywood Reporter caught up with the authors to discuss their research process, biggest Bulger surprises and how he always wanted a sit-down interview with Barbara Walters. 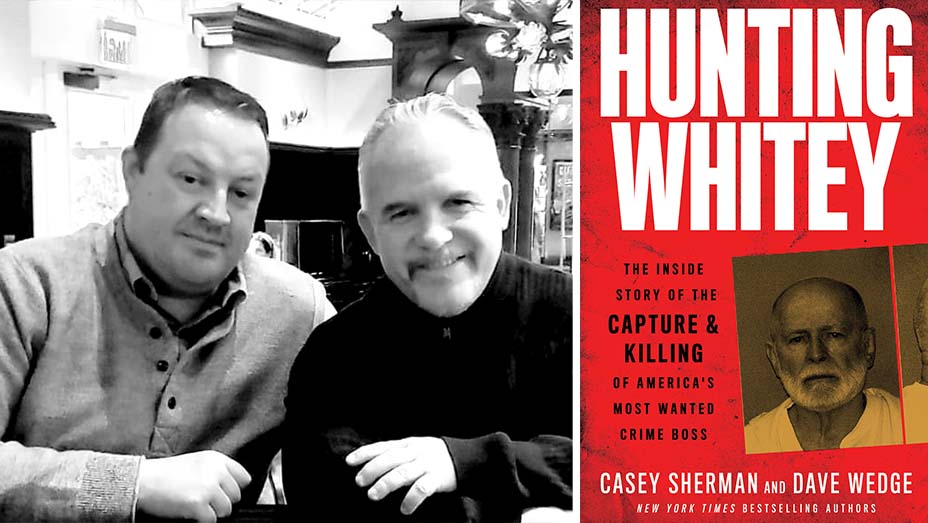 Congratulations on the book! I’m told that through your research, you reveal that Whitey hated how Hollywood portrayed him. Why?

SHERMAN While writing Hunting Whitey, we gained exclusive access to more than 70 newly discovered letters written by Bulger himself. In those letters, Bulger voiced his anger for the filmmakers behind the Whitey biopic Black Mass. We also learned for the first time that Whitey jeopardized his own freedom when he took in a screening of The Departed in San Diego while he was on the run from the FBI in 2006. Bulger was spotted in the movie theater by a Sheriff’s deputy who happened to be from Boston. He told us in an interview that Bulger shook his head in disgust many times while watching Jack Nicholson’s fictional version of him on the big screen. Bulger was armed and the Sheriff’s deputy was not. By the time the cop retrieved his service weapon, Whitey Bulger was gone.

Was there anything specifically about Johnny Depp’s portrayal that bothered him most?

WEDGE Whitey wanted to be the architect of his own mythology. For decades he had cultivated a reputation as a “gentleman gangster” when in fact, he was a cold-blooded killer and a top echelon informant for the FBI. Bulger refused to cooperate with the production because Depp’s character gave away secrets to the FBI and ratted out both his friends and gangland rivals. After the film was released, Bulger sent this letter to a friend: “[Depp] played John Dillinger in Public Enemies, saw it and enjoyed it — never saw Black Mass — have no desire — not at all accurate. Wish I had accepted [Depp’s] offer to meet, felt I couldn’t or I’d look like I endorsed the picture, Hollywood and [corrupt FBI agent] John Morris [played in the film by David Harbour]. Will explain someday — too weary to begin.” Bulger wanted to tell his story exclusively to Barbara Walters but he never got the chance. He was murdered in his prison cell under mysterious circumstances in October 2018.

What was your research, interview and writing process like for the book?

SHERMAN The research process was both exhaustive and exhilarating. We interviewed more than 30 insiders on both sides of the Whitey investigation including the FBI fugitive hunters who tracked him down in 2011 and Whitey’s brother Billy, once the most powerful politician in Boston. Most incredible, though, was corresponding with the prime suspect in Whitey Bulger’s prison murder. He’s a mobster named Freddy Geas who is currently serving life for another murder. Geas has been writing us from his cell in solitary confinement using a rubber tipped pencil because the guards won’t give him anything sharp. They are concerned that he’ll try to commit suicide or kill a guard.

What was the most surprising thing you learned about Bulger in reporting out the book?

WEDGE We learned that it was a female FBI agent named Noreen Gleason who broke the case and tracked down Whitey after 16 years on the run. Gleason changed the FBI’s strategy, which had focused on capturing Whitey. Instead, she shifted the bureau’s attention to his longtime girlfriend, Catherine Greig. “We find her, and we’ll find him,” she told her handpicked fugitive hunters. Two years later, FBI Special Agent Scott Garriola lured Whitey out of the apartment he’d shared with Catherine and arrested both. It could have ended in a bloodbath as Whitey had an arsenal of weapons hidden in their apartment.