You don’t get to play God — not once, much less twice — without the requisite gravitas, a sense of authority that is innate and unshakable under any circumstances. And despite having played pimps, prisoners, killers, Old West outlaws and others of undistinguished station, in addition to presidents and gentlemen of notable stripe, Morgan Freeman, who will receive the Screen Actors Guild Life Achievement Award at the Jan. 21 ceremony, always has embodied and projected just that: a sense of connate gravitas that he carries with him from role to role. Almost invariably, he centers any film in which he appears and positions the other characters in relation to his own.

At the same time, he has never been a showoff, an aggressive scene-stealer, the guy who compulsively needs to be the center of attention. He acts by stealth, steadiness, the slow accretion of detail.

If one surveys the 80-year-old’s body of work, what’s most striking is how much dramatic mileage Freeman accrues from holding back; it’s a perfect demonstration of the value of “less is more,” how restraint and small details can, in an expert’s hands, accumulate into fulsome performances over the long arc of their creation.

Our awareness of Freeman’s greatness has been something of a gradual thing as well. Little could I have known as a kid in 1968 that I was witnessing the Broadway debut of a major actor when I saw the wonderful Pearl Bailey-Cab Calloway production of Hello, Dolly!, in which Freeman, then 30, played the minor role of Rudolph. Similarly unremarked upon four years earlier had been the aspiring actor’s film debut as an extra in Sidney Lumet’s The Pawnbroker.

In fact, it would take more than 20 years for the public to begin to put a name to the face. After an itinerant childhood and four years in the Air Force during the late 1950s, Freeman muddled through the 1970s on such soaps as Another World as well as on The Electric Company and in 1980 appeared in his first significant film, Brubaker, in the small role of an angry prisoner. But in that decade, his most notable achievements came in the New York theater, where he won three Obies — for Coriolanus, The Gospel at Colonus and as Hoke Coleburn in the original off-Broadway production of Alfred Uhry’s Driving Miss Daisy, where his co-star was Dana Ivey.

At the same time, the actor, at age 50, finally made his big-screen breakthrough as a New York street pimp in Cannon’s otherwise unremarkable 1987 release, Street Smart. This unfamiliar actor with a silver front tooth delivered a turn so frighteningly realistic that many people assumed the filmmakers had just gotten lucky and found a real street guy to essentially play himself. Seen today, especially in light of Freeman’s subsequent, more dignified roles, it’s almost shocking to witness his tour de force as a scummy, evil character as well as to see the now more filled-out actor in such scarecrow-thin condition. The performance earned him his first Academy Award nomination. 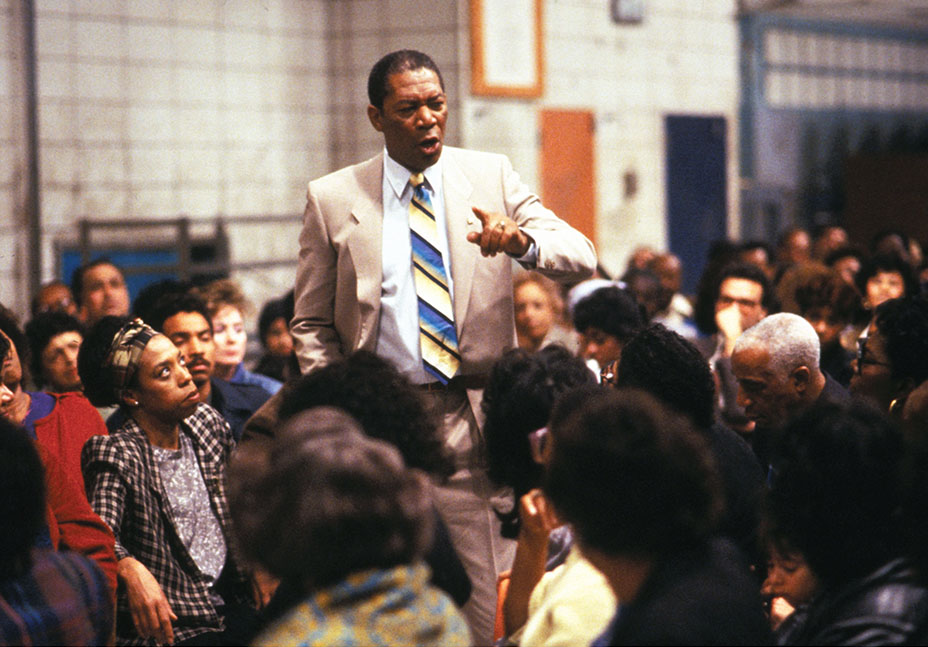 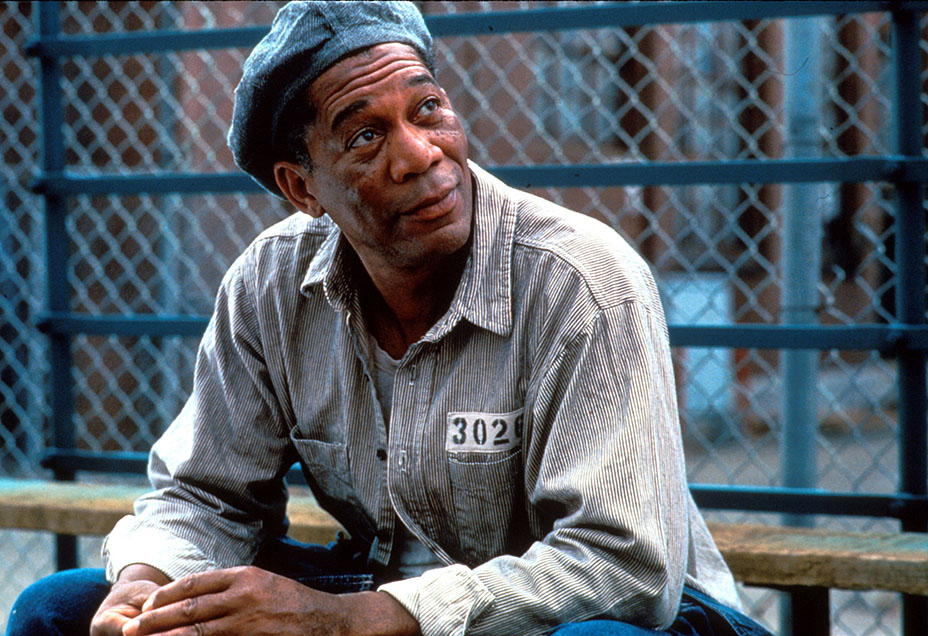 It all took off from there. The first glimpse of the low-key but tenacious kind of man Freeman would come to excel at playing was arguably visible when he played Michael Keaton’s addiction counselor in Clean and Sober the following year, and top billing finally arrived in 1989 with a role that, in retrospect, was highly uncharacteristic: that of a hard-ass, task-master high school principal who was determined to whip his out-of-control, underperforming students into shape in Lean On Me. Freeman plainly demonstrates in the film that he’s perfectly capable of playing it loud, hard and maniacal, but almost all actors can make you pay attention by ramping it up; this actor’s natural way is the opposite.

That same year, his permanent position in the cinematic firmament was secured by his indelible performance opposite Jessica Tandy in Driving Miss Daisy. In retrospect, the role of subservient and illiterate chauffeur Hoke stands as something of an anomaly in Freeman’s filmography; although he was born in and partly raised in the South, it’s a rare instance of him employing a thick Deep South accent along with, by his own description, borderline Uncle Remus vocal posturing and high-pitched cackling. But his fundamental dignity carries the day.

Most of Freeman’s films are set in contemporary times, with a few varied exceptions. On the plus side, among his period pieces is his outstanding work as part of excellent ensembles in Glory and Unforgiven, the latter provocative by virtue of how his blackness goes entirely unremarked upon in the Old West. Less persuasive are his appearances in the likes of 1991’s Robin Hood: Prince of Thieves and 1996’s Moll Flanders (while his turn as the magnificently dreadlocked African horse trader in the catastrophic 2016 remake of Ben-Hur at least gave its few viewers something to laugh with, rather than at). 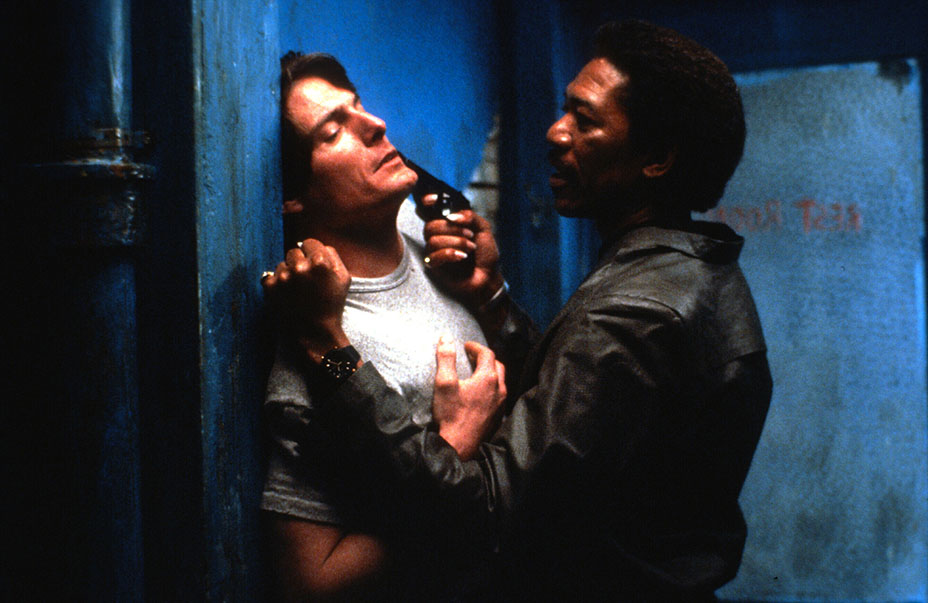 But it was during the 1990s that everything came together once and for all for Freeman when he became a household name and an important part of several franchises as well as an actor who refined his craft with keen discipline and subtlety. More than any other film, The Shawshank Redemption in 1994 solidified his position in the rarified realm of modern American actors par excellence; you could tell he listened as others spoke, and all of his own words were underplayed to deceptively full value. It’s the kind of performance that makes you lean in.

One could, at that point, begin to understand Freeman’s long admiration for that old master of understatement, Gary Cooper, as well as the high importance he places upon “stillness.” Freeman has been quoted as saying: “It’s what I learn from actors I work with. That’s all, and that’s the hardest thing.”

How Angelina Jolie Helped 'The Breadwinner' Capture the Voice of Afghanistan

With Tim Robbins in Shawshank, with Clint Eastwood as well as other performers of notable reserve, Freeman can sometimes make others seem like the histrionic ones onscreen. This was certainly the case in the film that won him a SAG Award and an Academy Award, Eastwood’s Million Dollar Baby in 2004, in which Freeman, employing a soft, gravelly voice that he never raises, exquisitely but without the slightest fuss plays a boxing gym lifer — a man with a belly and porkpie hat whose one good remaining eye has seen it all.

Such restraint had certainly not been necessary the previous year, opposite Jim Carrey, in the boisterous Bruce Almighty, in which Freeman, as the Creator, descends to earth in all-white garb to pass some of his responsibilities off to Carrey’s career-stymied TV reporter. Instead of just falling back on his time-tested skills to embody the voice of the Ultimate Authority, Freeman instead adds a perfect “I’ve seen it all” edge to his line deliveries. It not only makes his performance funnier but also lends a drop of plausibility as to why The Man might want to lay off a few of his responsibilities onto someone else for once. 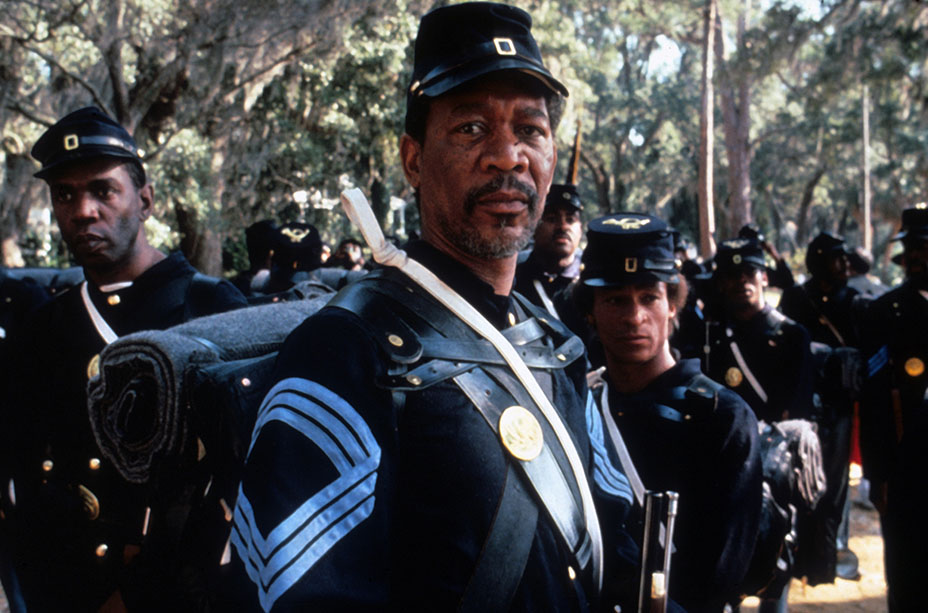 There has been, of course, more, much more, to Freeman’s screen career, including his prominent participation in four franchises beyond the Almighty duo: as Batman’s equipment supplier Lucius Fox in Christopher Nolan’s Dark Knight trilogy, as Dr. Alex Cross in Kiss the Girls and Along Came the Spider, in two Now You See Me outings and, rather less illustriously, in films in which Olympus and London have “fallen.”

But in my view, Freeman’s greatest and most emblematic performance comes in a film not immediately thought of in terms of acting but, rather, dazzling directorial skill. That would be David Fincher’s Seven, a work that investigates madness and in fact sees everyone in it lose their heads, literally or figuratively, except for Freeman’s Detective William Somerset, a veteran investigator who’s set to retire in a week when the case of his life lands in his lap.

In none of his other films does the actor’s essential sobriety, reserve and, yes, authoritativeness figure so centrally. Brad Pitt may receive top billing, but Freeman is onscreen considerably more, nearly all the time, and he indisputably carries this brilliant, remorseless work, one of the greatest of modern American films. Freeman’s detective may have seen enough, he may want to quit, but the unprecedented nature of the case propels him on to investigate the lowest depths of humanity — just as Freeman here reaches, not for the first or last time, the pinnacle of seemingly effortless screen acting. 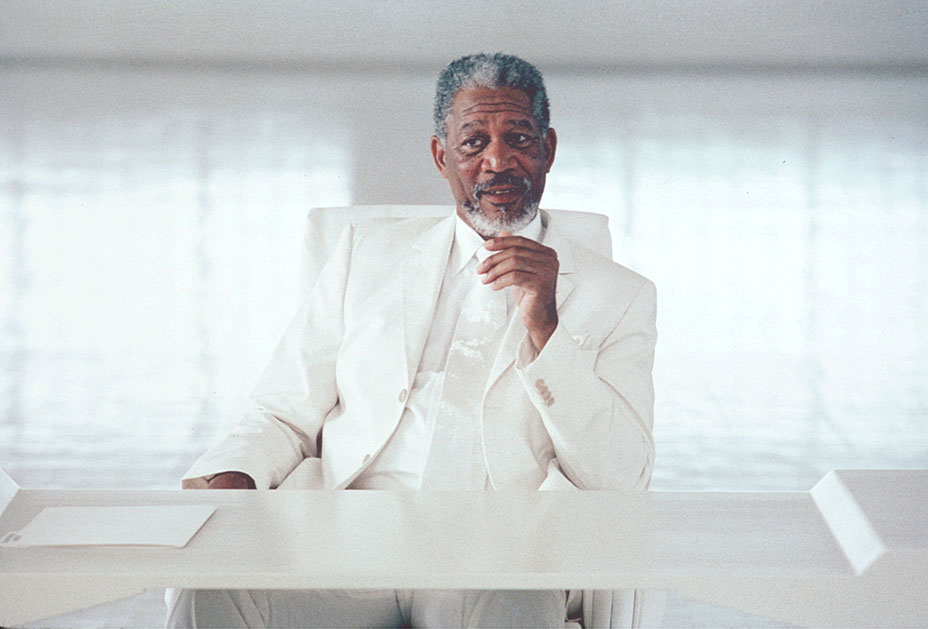 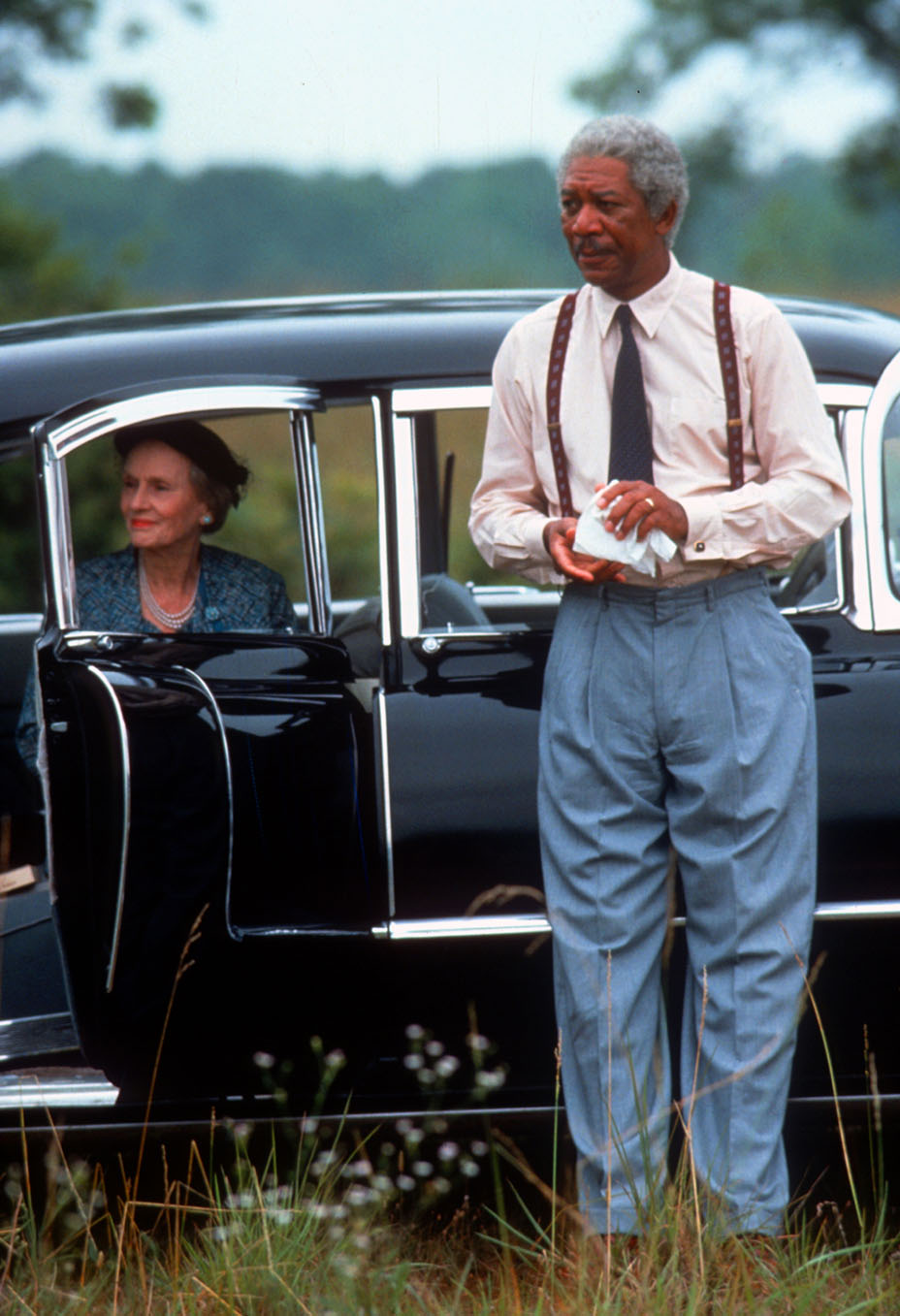