The Wearer: Daisy Ridley, who was styled by Samantha McMillen.

The Event: The Star Wars: The Last Jedi fan event at Oasis Coyoacan in Mexico City on Nov. 20. Ridley, who stars as Rey in the Star Wars franchise, was joined by producer Ram Bergman, director Rian Johnson and actor Mark Hamill on the red carpet.

Why It Matters: It’s been a minute, but Ridley is back on the step and repeat as she begins promoting her upcoming Star Wars film. For her latest outing, the English actress stepped out in a sleeveless top punched up with a diagonal row of metallic buttons, with a few left undone to reveal a paisley-print detail on the neck flap. The flattering shirt was paired with slim black pants that accentuated her lean legs.

The ever space-age-y Paco Rabanne, now designed by Julien Dossena, has been getting a lot of red-carpet play lately. Tracee Ellis Ross wore Dossena’s silver fringe dress while hosting the American Music Awards on Sunday; Yara Shahidi opted for a steel gray bustier and pants for The Hollywood Reporter‘s Next Gen party; and Michelle Monaghan sparkled in a jumpsuit with a dramatic side cutout at the Country Music Awards.

Rabanne founded his namesake label in 1966, but since his departure from the company in the ‘90s, the brand has gone through several lead designers. Since joining in 2013, Dossena has had the best luck reviving its presence in Hollywood. And fun fact: The brand first appeared in Hollywood in 1968, when Rabanne designed Jane Fonda’s sexy green futuristic costume for the sci-fi film Barbarella. Seems like the stars still can’t get enough of it.

Where to Buy: Sleeveless jacket, $1,290, and high-waist pants, $730, available in February at PacoRabanne.com. 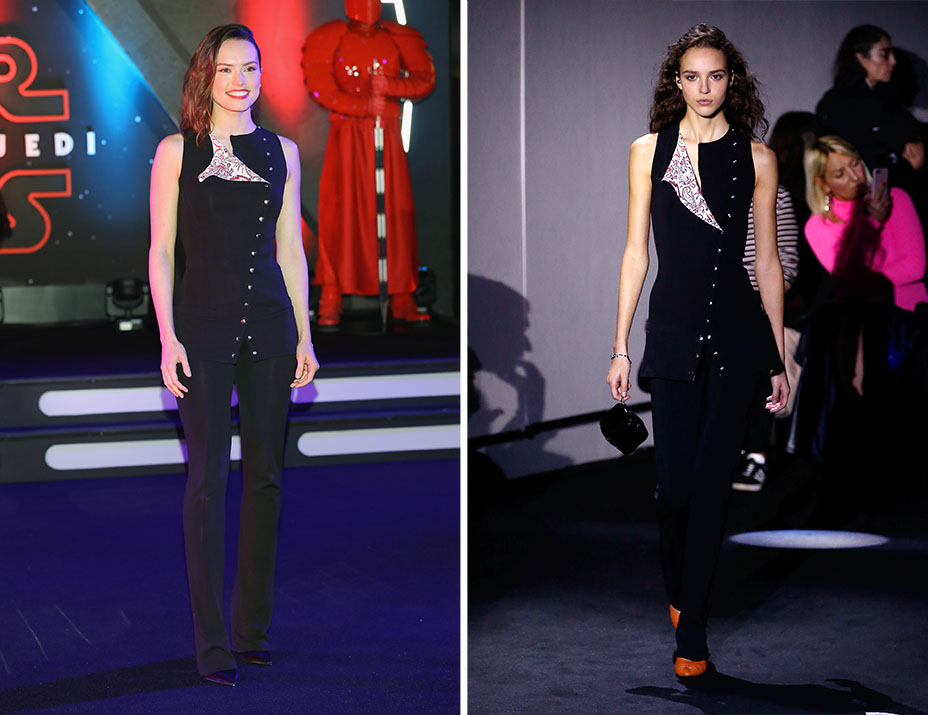