Continue to The Hollywood Reporter SKIP AD
You will be redirected back to your article in seconds
Skip to main content
March 28, 2019 9:28am

Sustainability is in season.

H&M’s new Coachella-appropriate pieces include a metallic jacket made of silver Pinatex “leather” (created from the fibers of pineapple leaves); a tunic dress made of Bloom foam (a sustainable, flexible algae-based foam) and a corset-style, off-the-shoulder shirt made out of Orange Fiber (a silky fabric using citrus fruit by-products).

“I left the house today and my mom was like, ‘Oh I love that.’ And I said, ‘I think it’s made of oranges or something,'” Fanning told The Hollywood Reporter at the al fresco cocktail hour, referring to her metallic dress. “You would never know the difference between something that’s not sustainable. And I think that seeing more of that and people realizing there shouldn’t really be a difference and everything should really be made sustainably — I’m so happy that they’re bringing that to the masses.”

The Once Upon a Time in Hollywood actress said she had a conversation last week with a fashion insider about the amount of clothing that ends up in landfills. Much like the movement toward reducing plastic, Fanning said, “We really need to apply that to what we wear. Knowing where our clothing is coming from and where it’s going is something we should start thinking about a little bit more.”

(She also teased her upcoming performance in the Quentin Tarantino film, saying, “It was such a dream come true for me to be a part of it and really something to cross off the list. … I would have probably played any character that he had asked me or had chosen me for. It was a real cherry on top that it was an incredible, fascinating, challenging character. But I would’ve been like Girl No. 1.”) 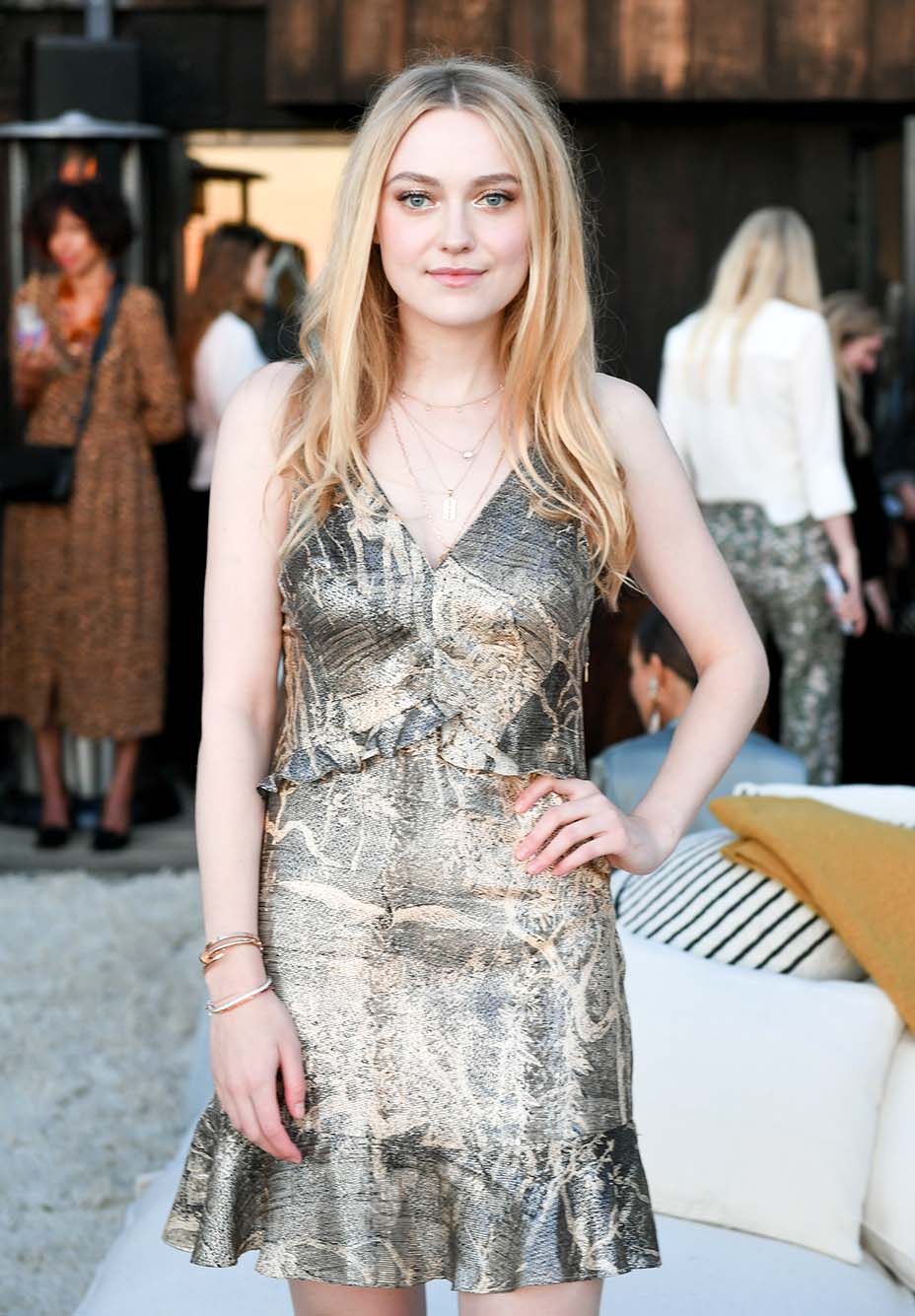 At the party, guests lounged on plush white couches near heat lamps while taking in the sunset view, overlooking the foggy city from the Hollywood Hills. Shayk noshed on appetizers — which included handmade vegetarian dolmas, roasted beets and greens, quinoa tabbouli, shredded Brussels sprouts and chamomile feta aubergine rolls — before talking with THR. The model (and partner of Bradley Cooper) said she has stopped using plastic bottles at home, instead opting for paper cups to reduce her waste. Wearing a teal print dress from H&M and matching shimmery eyeliner, Shayk said she sees a trend in the fashion industry toward going green.

“It’s a huge wake-up call for all of us. I think, brand by brand, they start to wake up and use no fur, no leather and use sustainable, recyclable products,” Shayk said. “We should spread the message, not only through us, but through the fashion brands as well. Fashion cares too.”

As for the H&M line: “For me, as a fashion model, it’s really important to see that they care about mother nature,” Shayk told THR. “We live in the 21st century and the technology is amazing, so you can see all those pieces are still cool and colorful and fashionable. … We all know what’s going on in the world — climate change — and look how many tons of plastic get dumped in the ocean and how many animals’ lives get hurt by it.” 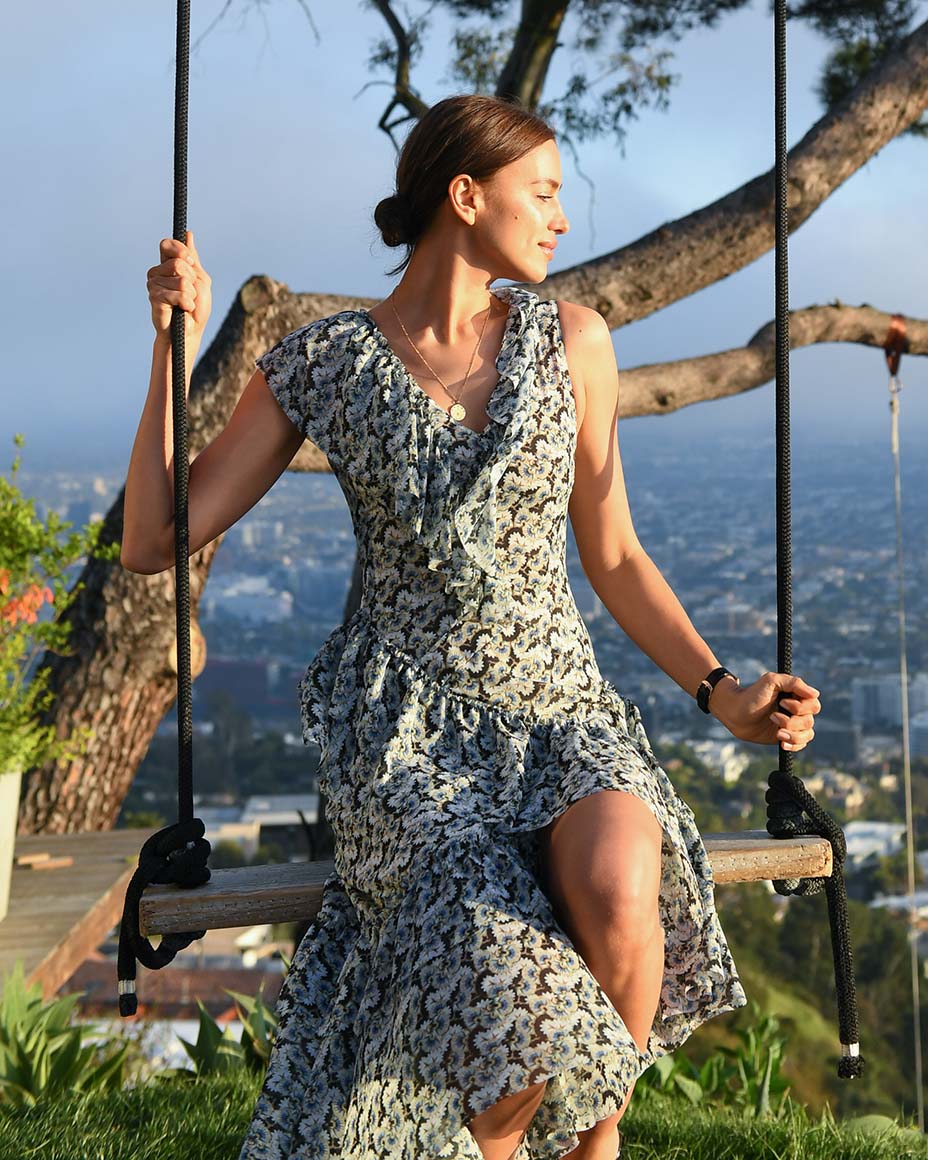 With themes of nature and florals, the Conscious Exclusive palette focuses on lavender, aqua and Pantone color-of-the-year coral.

“The inspiration was taken from nature,” Ann-Sofie Johansson, creative adviser at H&M, told THR. “Yes, the well-being of nature. Yes, being in nature and the healing power of nature as well. So you can feel a spiritual feeling with the music and everything here. Medical plants and crystals and animals are translated into these beautiful prints and jacquards.”

H&M tops a growing list of brands to embrace eco-friendly fashion. Louis Vuitton and Christian Siriano partnered with Suzy Amis Cameron’s Red Carpet Green Dress (RCGD) for the 2019 Oscars to style Laura Harrier and Danielle Macdonald in sustainable silk, recycled tulle and vegetable-dyed fabrics for the red carpet. Or look no further than Penelope Cruz’s sustainable lab-created jewelry line with Swarovski, launched in July 2018, or to Cate Blanchett, who brought the environment to the forefront at Cannes last summer by deciding to re-wear her 2014 Golden Globes gown by Armani.

Morrone (the Mickey and the Bear actress also known for dating Leonardo DiCaprio) told THR that, because of climate change, going green should be on the forefront of everyone’s minds. She has gone plastic free — “Amazon has such great things that it’s actually pretty easy to do” — and praised H&M for putting a foot forward in leading the movement in clothing.

From a Sustainability Wave to Givenchy: 6 Hollywood Trends to Look For on 2019 Red Carpets

“When I went to the showroom and saw the clothes they were making, I was like, ‘How in the world is this all sustainable and recyclable stuff?’ I fell in love with these cowboy boots,” Morrone said while flashing her silver boots, made of pineapple leather. “I actually wasn’t aware they were making clothes that were this cute that were sustainable. I thought that was awesome, and I wanted to be part of it. This is a really great step to influence other brands.”

Morrone added that the free-flowing pink, long-sleeved dress she picked for the party is what she wears on a day-to-day basis, describing her style as “boho.” And yes, she might be wearing the boots to Coachella after they’ve been worn in.

The actress later spoke about facing her acting fears in her upcoming project. “Mickey and the Bear was the scariest choice I’ve made in my career because I feel pretty safe in the world of comedy and everything else, but I don’t feel safe in deep, dark, scary roles that I took on like Mickey and the Bear,” she told THR of the military family drama that discusses addiction.

Morrone, who performed in Augustine Frizzell’s Never Goin’ Back, described her new film as a challenge to herself. “The first day on set I was like ‘What did I just sign up for? I shouldn’t have done this.’ And then you kind of get into it.” When a friend joked that she needs her own talk show, Morrone said, “Let me master one thing at a time okay. Let me deal with climate change and acting first.”

Her partner, DiCaprio, invests in other eco-friendly lines — Allbirds footwear (also loved by Sterling K. Brown, Darren Criss, Ashton Kutcher and other stars), which crafts its shoes from New Zealand merino wool, laces from recycled plastic and sugarcane instead of plastic for the soles, as well as Diamond Foundry, which specializes in lab-grown diamonds that are 100 percent carbon-neutral and help to scale back the social and environmental impact of diamond mining. 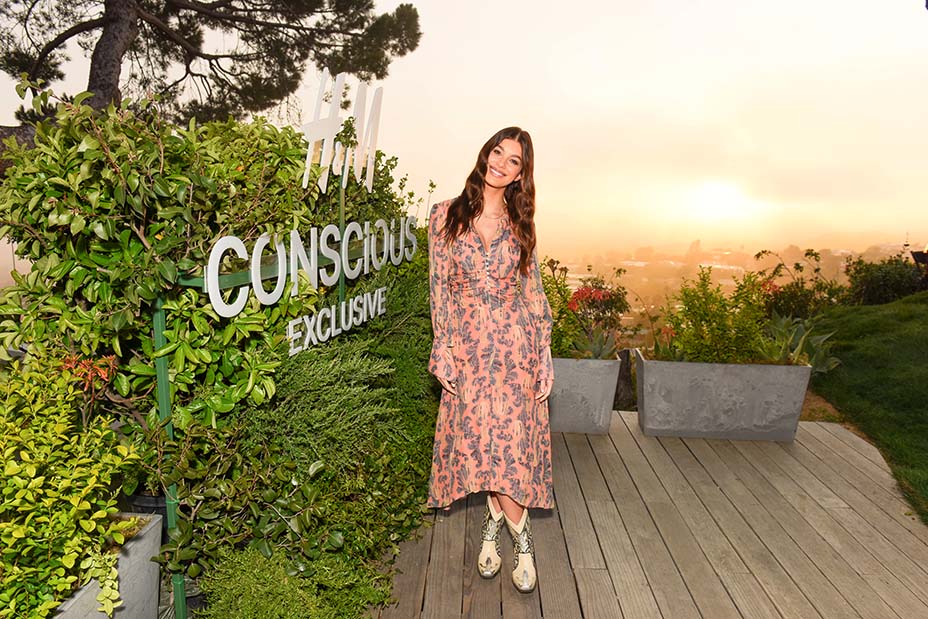 Johansson said H&M frequently uses sustainable fabrics such as organic cotton, recycled polyester and organic linen, which “underlines how seriously we are taking it.” She said, “We have to work with sustainability. That is a must. It has to be a change. So this is the only way forward, and we have a vision. The vision is that we should lead the change toward renewable and circular fashion.”

She added that H&M’s goal by next year is that all their cotton will be sustainably sourced and, by 2030, all fabrics should be sustainable.

“There are loads of innovations out there. It’s just a matter of supporting them, and them being able to scale things up since we’re so big today, which is a good thing also. We are big and we can really make a change,” Johansson said. 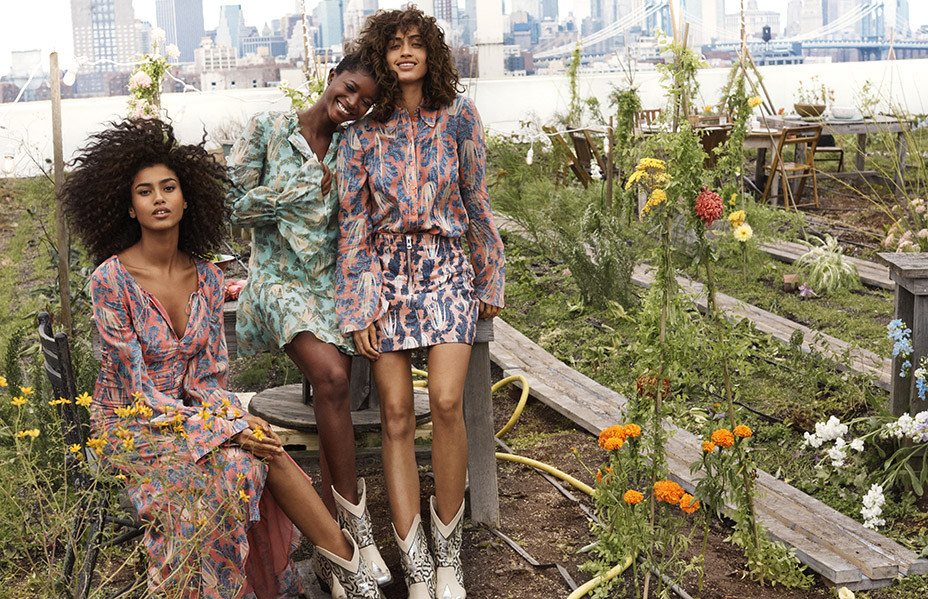