Almost a decade later, Heath Ledger’s role in The Dark Knight remains the most acclaimed superhero movie performance of all time.

The actor, who won an Oscar for playing the Joker, went to great lengths for the role, as is recounted in newly unearthed interviews with Ledger, director Christopher Nolan and Batman actor Christian Bale, who reveals that during the film’s iconic interrogation scene, Ledger encouraged him to make the physical altercation between the two authentic.

Below are excerpts from those interviews, which have been published in the new book 100 Things Batman Fans Should Know & Do Before They Die. Author Joseph McCabe conducted the interviews with Bale and Nolan in 2008 around the time of the film’s release, and spoke with Ledger in November 2007, when the actor was promoting I’m Not There. Ledger died at age 28 on Jan. 22, 2008.

What was it like working with Heath Ledger as the Joker?

Christian Bale: Our first scene was in an interrogation room together, and I saw that he’s a helluva actor who’s completely committed to it and totally gets the tone that Chris [Nolan] is trying to create with this. We’re not going for actors revealing their enjoyment of playing a wacky caricature. We’re treating this as serious drama. You go into character and you stay in the character. I love that. I find that so ridiculous that I love it, and I take that very seriously. Heath was definitely embracing that. When he was in the makeup and the garb he was in character the whole time; and when he took it off he was absolutely fantastic company to be around.

As you see in the movie, Batman starts beating the Joker and realizes that this is not your ordinary foe. Because the more I beat him the more he enjoys it. The more I’m giving him satisfaction. Heath was behaving in a very similar fashion. He was kinda egging me on. I was saying, “You know what, I really don’t need to actually hit you. It’s going to look just as good if I don’t.” And he’s going, “Go on. Go on. Go on….” He was slamming himself around, and there were tiled walls inside of that set which were cracked and dented from him hurling himself into them. His commitment was total.

Were you ever worried about being upstaged?

Bale: No, not at all. Because it was exactly the point that I had a problem with in all of the other Batman movies. Especially after reading Frank Miller’s Batman: Year One and various other graphic novels. I asked myself, “Well, how come it’s always been that he’s the most boring character?” I’d never found him to be intriguing at all. Whereas these graphic novels depicted him as by far the most fascinating of them. I feel like we gained that back with Batman Begins — that he’s a character with substance. So I have no problem with him competing with somebody else. Because that can only make for a better movie, if you have these other fascinating characters arriving on the scene, too.

Christopher Nolan: Johnny Rotten, Sid Vicious, these kinds of punk influences were some of the things we talked about. We also talked about the character of Alex in A Clockwork Orange. He’s very anarchic and yet somehow has great charisma, both in the book and in the film. We talked about a lot of different influences, and he talked about an extraordinarily diverse set of influences like ventriloquist dummies. The way they would talk and the way they would move and all kinds of peculiar ideas that I wasn’t really able to get a handle on until I saw him start to perform the scenes, and start to show how the character moved and how the character gestured and how the character spoke, with this extraordinarily unpredictable voice. The range of the voice, from its highest pitch to its lowest pitch, is very extreme, and where it shifts is unpredictable and sudden.

The thing with the tongue was…he had this prosthetic that was covering his lower lip and it would come unglued sometimes. I’d seen him sort of sticking it back with his tongue, and it was only after a few weeks of shooting that I realized that wasn’t what he was doing, that he had started to adopt that actually as part of the character. It was an interesting balance, editing the performance, because he has all kinds of interesting facets, all kinds of mannerisms and things. What I like about them all is they all feel that they come from the character. They don’t feel like actorly touches. I read them as genuinely part of the fabric of a real human being.

You’ve gone on record as saying you weren’t a huge fan of comic books. What attracted you to The Dark Knight?

Heath Ledger: Yeah. The only reason I wasn’t [was] I grew up in a household of girls. So there were very few Batman comic books lying around. There [was] mainly Archie. So that’s probably the only reason why I never grew up reading Batman.

But I really loved Batman Begins; and the character of the Joker was just too good to turn down. I’ve said this before, but…if Tim Burton was doing The Dark Knight and asked me to play the Joker I wouldn’t have taken it. Because to try and even touch what Jack Nicholson did in Tim Burton’s world would be a crime. So when Chris [Nolan] came to me, and…I knew how Chris was. He had already set up the world for me. I’d seen what world it was that I would be playing in. So I knew it was open for a fresh interpretation. I also instantly kind of had something up my sleeve, which happened to be exactly what Chris was kind of looking for. We sat down and kind of shared ideas, and they were the same. So we just went with it. 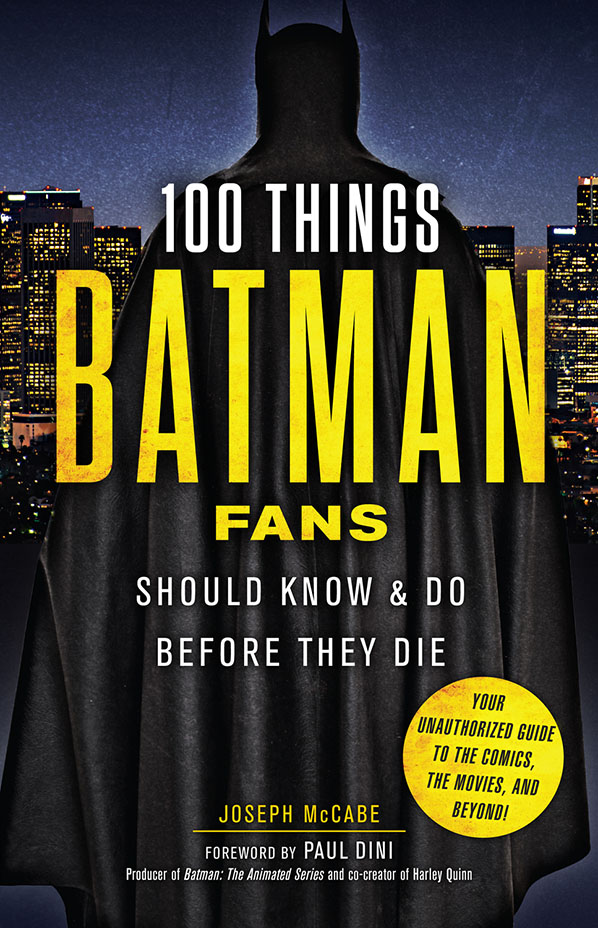 This excerpt from 100 Things Batman Fans Should Know & Do Before They Die, by Joseph McCabe, is printed with permission from Triumph Books. For more information or to order a copy, please visit www.triumphbooks.com/100batman.