At an off-site event during New York Comic Con, 20th Century Fox revealed more about next year’s Dark Phoenix — including an entire sequence from the movie showing the team in action.

The studio screened 13 minutes of footage from the movie for fans and press, an in-progress sequence that revealed how much has changed in the cinematic world of the X-Men since 2016’s X-Men: Apocalypse, and showing the origins of Jean Grey’s Phoenix persona. Director Simon Kinberg made a point of saying that both visual effects and the soundtrack, which features Hans Zimmer’s return to superhero movies, are unfinished at this point.

The shift in perspective toward mutants in the footage was pronounced; the X-Men are not only seen as heroes, they’ve been accepted as such by the establishment, to the point of Charles Xavier (James McAvoy) being called directly by the president of the United States when a NASA mission runs into trouble. That comes with its own problems, not least of which is that Xavier is responding so well to the praise that he pushes the X-Men further than they should in service of saving the day — something that team leader, Mystique (Jennifer Lawrence), challenges him on.

The character that pays the largest price for Xavier’s desire to please is Jean Grey (Sophie Turner), however, who seemingly dies during the mission — in a way that is likely to please fans of the original “Dark Phoenix Saga” of the comic books, which is to say, “cosmic rays on board a space shuttle.” She ends up miraculously surviving for reasons left unclear in the sequence, but all too obvious from the promotion (and title) of the movie itself.

Talking after the footage, Tye Sheridan (Cyclops) and Turner emphasized their appreciation of Kinberg as director and collaborator of the movie. Turner talked about the months of preparation she and Kinberg had to fine-tune the portrayal of Jean’s experience — “We mainly studied schizophrenia and personality disorder. When you see the movie, or if you’ve read the comics, you’ll know why,” she explained. “This, I felt, does relate so much to the mental illness world. I felt like everything had to be a respectful version of what it is, and not feel gimmicky. This script, even with the fantastic elements, not once does it make it any lighter than it is.”  Sheridan, who starred in Bryan Singer’s Apocolypse, shared of Kinberg, “it was nice to have someone guiding us and leading us … Overall, this film was much more pleasing to make.”

Kinberg downplayed the praise, saying that it was “great fun” to direct a movie for the first time, but that he’s had good experience learning from some familiar names. “I got a huge amount of help,” said Kinberg, screenwriter behind multiple X-Men movies and producer of films such as The Martian and Murder on the Orient Express. “I got to practice directing on some big feature movies, and I’ve got to sit back and watch people like Ridley Scott and Ken Branagh who treated me like a partner. I learned a lot watching Ridley direct, especially with the way he collaborated with the actors. He understands that part of what’s so great about making movies, is that you have an opportunity to create something greater than you could on your own.”

He also talked about the collaborative process with Turner — “it wasn’t running the scenes as much as it was investigating the scenes and taking them apart and putting them back together” — and said that another actor he had a deep collaborative experience with on the movie was Jessica Chastain, who plays the mysterious antagonist of the movie. 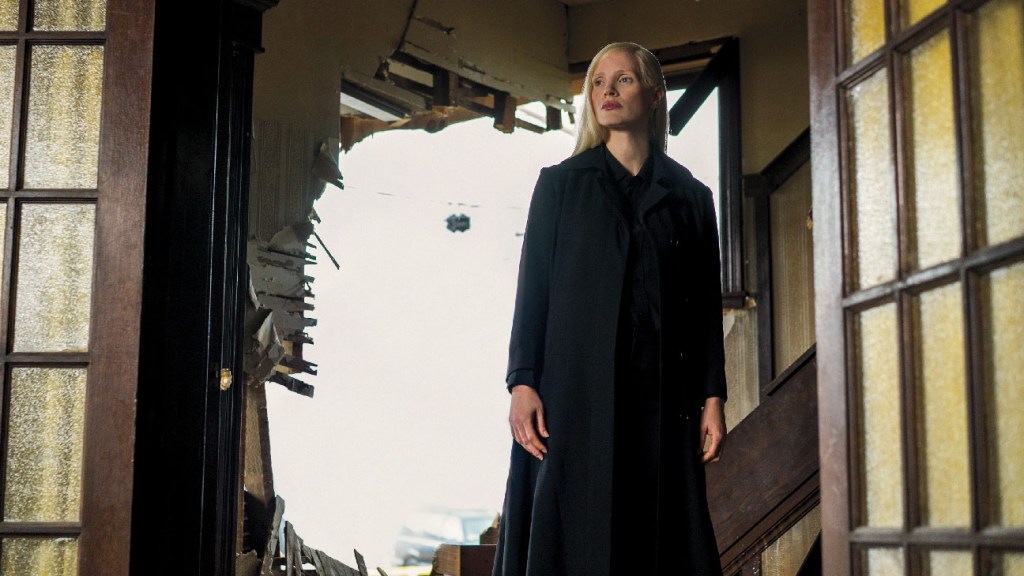 “We crafted her look together, and her voice,” he said of the as-yet undefined character. (Kinberg did say that she plays an alien in the movie, again raising the likelihood of her playing Lilandra, a longstanding X-Men comic book character.) “She’s many things, but she is ultimately the villain of the film. We talked about finding the voice of a villain that is unique and not mustache-twirling, and she came up with the metaphor of the vet telling you that your dog needs to be put down. That weird calm, terrifying voicing is very different. Once she found her way into that, the character locked in.”

Sheridan and Turner made it clear that the emotional journey of the movie was very grounded in easily recognizable feelings, with Sheridan teasing, “I think things start to unravel throughout the film, [and] suddenly my character has lost the love of his life and she’s lost control of himself, and that’s a lot to grapple with. You see a lot of fragility in Scott that you don’t get to see in the previous movies.” For Kinberg, though, the movie is “larger and more cosmic” than earlier X-Men movies, with an unexpected inspiration being credited for making it possible.

“What Marvel Studios has done in terms of making [superhero] movies extra-terrestrial has helped us to tell this story, to also go to outer space, to have alien characters,” he said, pointing specifically to Guardians of the Galaxy and Thor: Ragnarok. “There are scenes in outer space—you couldn’t have had that in Logan.” But that doesn’t mean that Hugh Jackman’s final outing as the X-Man doesn’t have any impact on the new installment; when asked about a potential Logan influence on Dark Phoenix, he did admit, “It has that texture, that emotionality.”

The event came after last week’s trailer, as well as the news that the film had been pushed back several months from its February 2019 release date. Dark Phoenix will be released June 7, 2019.