Continue to The Hollywood Reporter SKIP AD
You will be redirected back to your article in seconds
Skip to main content
June 9, 2019 6:45am
Logo text

Dark Phoenix, the underwhelming conclusion to the X-Men movie franchise, is the latest take on a story that writer Chris Claremont, penciler John Byrne, and inker Terry Austin originally related in issues #129-138 of The X-Men (first published from late 1979 through 1980). In the X-Men comics, Jean Grey, one of the mutant superhero team’s founding members, has reached a turning point: After a brief run-in with the evil socialites (and one cyborg) at the Hellfire Club, Jean finds she can no longer control the God-like Phoenix, a symbiotic alien that has inhabited her body since Uncanny X-Men #101 in 1976. Basically: the Phoenix takes over Jean’s body and then blows up D’Bari, an alien planet inhabited by billions of innocent bystanders. Jean/Phoenix is then put on trial by the Shi’ar (basically: the D’Barians nosy neighbors), who argue that killing the Phoenix is the only surefire way to prevent future acts of random planetary genocide.

As Scott “Cyclops” Summers recalls (in X-Men #138), the end of “Dark Phoenix” was also the end of an era: The X-Men had already undergone a major roster change-up in 1975 with Giant-Sized X-Men #1, when writer Len Wein and artist David Cockrum introduced readers to new team members like Logan/”Wolverine,” Peter “Colossus” Rasputin, and Ororo “Storm” Munroe. Under Scott’s command, the X-Men have faced dozens of threats without much reward or security, including mutant-killing Sentinel robots, a self-described “Brotherhood of Evil Mutants,” and also a pterodactyl guy. X-Men #138 — an issue-length recap issue — is, in that sense, unexpectedly essential since it re-frames the “Dark Phoenix” story as the moment when Scott realizes that he needs to stop tumbling from one fight to the next, before he’s overwhelmed by the same pressure that killed Jean.

There’s no such urgency in Dark Phoenix (the movie), which is generally a more cynical and unfocused version of Claremont, Byrne, and Austin’s original comics.Writer/director Simon Kinberg (one of X-Men: The Last Stand‘s two credited screenwriters) makes a lot of the little resentment that Scott unloads on prodigal leader Professor Charles Xavier in The X-Men #129 (“We’re not teenagers anymore!”). Kingberg’s Xavier (James McAvoy) is an absentminded surrogate dad who, as Raven “Mystique” Darkhölme (Jennifer Lawrence) says, is more involved with promoting than supporting the X-Men. Worse still: Kinberg’s Xavier erased Jean’s memory of that time that she, as a child, accidentally killed her mother in a car accident. That long-delayed revelation causes a chain reaction: Jean fatally impales one of her own teammates, and that death understandably leads her teammates to realize that Jean (and the X-Men, by extension) isn’t what she used to be.

Xavier’s betrayal — there’s no mention of Jean’s parents in the original “Dark Phoenix” comics — shifts the blame from Jean to Xavier and makes the story more about daddy issues (forgive him!) and maintaining the status quo (rename the school!). Which is especially disappointing since the “Dark Phoenix” story has, over the years, always been about accepting Jean as a person capable of both terrible and heroic behavior. In the comics, the D’Bari’s planet is completely destroyed, a development that’s walked back somewhat in the 1994 cartoon adaptation of the “Dark Phoenix” story (in the animated X-Men series, Phoenix blows up an uninhabited moon). Claremont even penned an endearingly spacey coda to the “Dark Phoenix” story in “Flight of Angels,” a short back-up story pencilled by Mike Collins that was first published in Classic X-Men #43 (in late 1989). In “Flight of Angels,” Jean meets up with Death — represented here as a construction worker with a sleeveless top, a red neckerchief and a day-drunk six-o’-clock shadow — and gets a new lease on life after He explains what the Phoenix represents:

“[Phoenix] is the embodiment of life itself, embodied by passion — messy and chaotic and agonizing as that can be — as I represent order and structure and entropy. And she could not bear to see her handiwork undone. She required a form — and avatar — through which to act. And who better than a a spirit — a fire, if you will — carved most closely from her own.”

The lesson that readers are left with — in true Marvel Comics fashion, Death tells Jean that she will forget that this conversation ever happened — is not that Jean is a moody woman with a murderous past, but rather that she’s imperfect, and that’s OK. From here on, we/she’s encouraged to “Learn. Grow. Do better.”

This coda is striking since Jean and the Phoenix were originally not supposed to die at the end of the “Dark Phoenix” story. In interviews that are reprinted in the Dark Phoenix graphic novel collection, Claremont and Byrne recall that editor Jim Shooter insisted that their story end with Jean’s death. Shooter adds that it just didn’t feel right to let Jean off the hook what with the whole killing-a-planet thing. Claremont and Byrne’s proposed ending was later published in Phoenix: The Untold Story, a decent, if inessential stand-alone issue that re-jiggers the final six pages of X-Men #137.

“Flight of Angels” is a more fitting post-script since X-Men #138 ends with Scott’s version of events, moments before he decides to quit the team. To be fair: Scott gratefully acknowledges (in #137) that Jean was incredibly selfless when she gave her life to protect the X-Men (longer story short: the Shi’ar Royal Guard was otherwise gonna kill ’em all during a trial by combat). But beyond that: Kitty “Shadowcat” Pryde’s arrival at the Xavier School (in #138) is the only real sliver of hope at the end of the “Dark Phoenix” comics. The rest of that bleak story’s implications hang over Wolverine’s head for the next story arc, when he goes off in search of Sasquatch and other members of Canadian super-team Alpha Flight (for more on Alpha Flight, check out The Flight Stuff, a hilarious and wonderfully nerdy podcast run by Cinepunx folks Adrianna Gober, Liam O’Donnell and some guy named Doug Tilley). 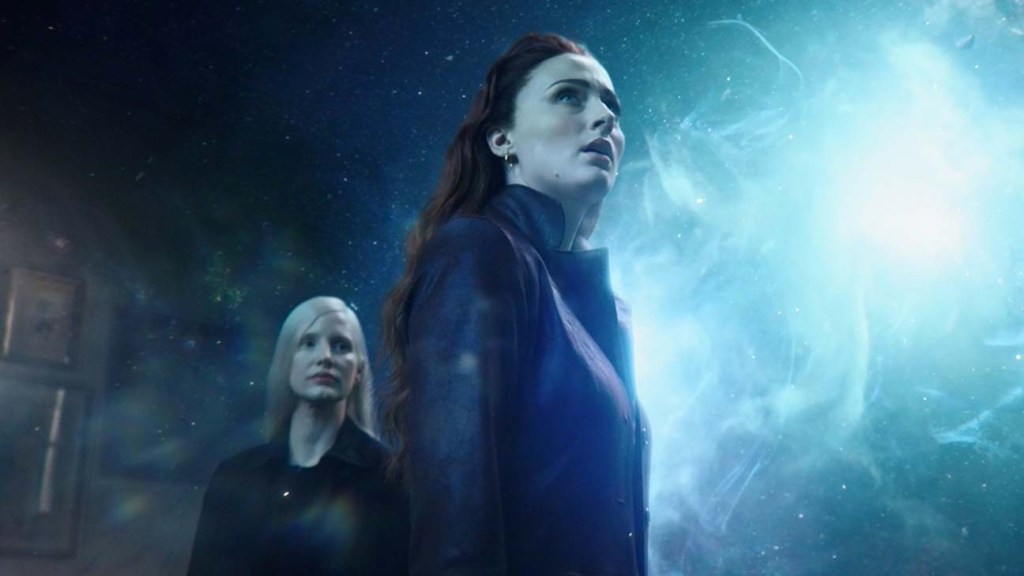 Dark Phoenix (the movie) is more tonally berserk since its sappier finale (how about a nice game of chess, Charles?) has almost nothing to do with Kinberg’s grimdark take on Claremont/Byrne/Austin’s source material. In Kinberg’s movie, Jean’s constantly threatening to do something bad, but she’s generally more tame in Dark Phoenix than she is in the comic book story “Dark Phoenix” (with the notable exceptions of Jean’s manslaughtered mom and murdered teammate). At least, she’s relatively mild until the D’Bari — that is, the D’Barians who survive after the Phoenix blew up their home planet — try to convince Jean to forcibly terraform the Earth into a planet that’s more like, well, D’Bari.

At that point, the D’Bari become the story’s main punching bag: led by the chilly Vuk (Jessica Chastain), the D’Bari refugees needlessly kill Jean’s biological dad and generally go on a tear that only ends with their utter destruction at the hands of Jean, Magneto (Michael Fassbender!) and most of the X-Men (also: the U.S. military, who do a little murdering, too). There’s the one D’Bari lady that Kurt “Nightcrawler” Wagner drops in front of a speeding train. And then there’s three or four D’Barinos who are literally pulled apart in slow motion. Don’t worry, though: This is a PG-13-rated film, so there’s no blood when these baddies are eviscerated, just a lot of crumbly black sediment where their body parts used to be.

So, to recap, if you try to retaliate against the alien force that killed your planet — you get blown up. But if you accidentally kill a teammate in a fit of pique, after your adopted dad spent years not telling you that you kinda sorta killed your biological mom? Mazel tov, you’re a martyr, have a plaque! Granted, Kinberg and the rest of Dark Phoenix‘s creators didn’t exactly have the easiest time making their movie (apparently the shooting script was rewritten on a daily basis). But there’s nothing in Dark Phoenix that moviegoers absolutely need, not when the “Dark Phoenix” story has already been told, tweaked and revised so many times before.