So, Josh Brolin will add to his comic book character resume — following DC’s Jonah Hex and Marvel’s Thanos — by playing Cable in the much-anticipated Deadpool 2, delighting all kinds of fans who have been waiting to see Nathan Christopher Charles Summers on the big screen, alongside his sometimes comic book co-star. For everyone else, however, the casting leaves one big question: Who is Cable, anyway?

The answer to that question is impressively complicated. On the most surface level, Cable is a character that debuted in 1990’s New Mutants No. 87 (after a one-panel tease the previous issue), who sprang from the imagination of Deadpool creator Rob Liefeld. Created as a tough, no-nonsense adult who took charge of the teenage superhero team and re-organized them into the quasi-military outfit X-Force the following year, the mix of Liefeld’s design, with the character’s gruff attitude and mysterious past quickly turned Cable into a fan favorite whose appeal, impressively, withstood the weight of retcons and comic book history that ended up attached to him.

Cable’s backstory, as it would eventually be revealed, was this: Cable is the son of the X-Men’s Cyclops and his then-wife, Madelyne Pryor. That baby had debuted in 1986’s Uncanny X-Men No. 201, and would eventually be sent into the far future in 1991’s X-Factor No. 68 to save him from a virus that would otherwise have led to his death. (In the meantime, Madelyne had been revealed to have been a clone of Jean Grey, who had been dead and then come back to life again because it was a different clone who had died.) 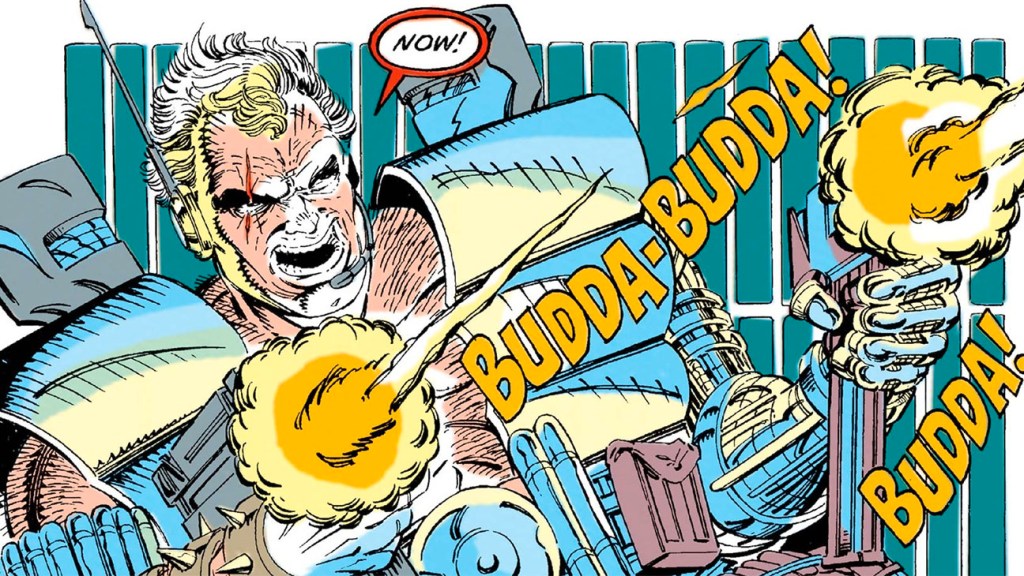 In a 1994 mini-series called The Adventures of Cyclops and Phoenix, it was revealed that Cyclops and Jean Grey actually managed to raise Cable in the far future by psychically possessing clones of their own descendants, although the child was unaware that he was actually being raised by his father and kind-of-sort-of mother.

The virus that had forced him to leave the present day had resulted in his being part-cyborg, and — because there weren’t enough clones in this story so far — it turned out that he would grow up and come into conflict with Stryfe, a worshipper of longtime X-Men villain Apocalypse, and someone who, of course, turned out to be a clone of Cable himself. When Stryfe travels back from the future to the present day to advance a plan by Apocalypse, Cable follows him, resulting in his being around to lead the New Mutants and X-Force. Got that?

Following his departure from the X-Force series and the subsequent end of his first solo comic book, Cable ended up co-starring with Deadpool in Cable & Deadpool, a 50-issue series that saw the two form an odd-couple approach to events, with Deadpool’s comedic chops finding the ultimate straight man to play off. It’s likely that the relationship between the two in this series — Cable trying to be a good guy despite his more cynical instincts, while Deadpool is essentially a violent Bugs Bunny, causing havoc and undoing Cable’s plans by accident as often as by design — will form the basis of their cinematic friendship, giving Ryan Reynolds a comedic partner who’ll provide humor from attempts to withhold his frustration as much as anything else.

In more recent years, Cable’s comic book adventures have taken him all over the place — he’s returned to the future, come back to the present, died, been reborn, joined both the X-Men and the Avengers, as well as led multiple new versions of X-Force. This seeming wanderlust (or, to be less charitable, inability to find a niche that fans accept him in) offers little guidance as to his role in Deadpool 2 beyond simply “straight man,” but perhaps that’s all that really counts for now. At least audiences already know that Brolin can do “disgruntled” well.