“This is a great! No one is having a better day than me! Let me assure you!” Liefeld said seconds after Heat Vision gave him a call Monday afternoon.

The reason for his infectious enthusiasm? Deadpool star Ryan Reynolds shared the first two photos of Josh Brolin as Cable, the X-Men character Liefeld created in 1990 along with Louise Simonson.

Character first-looks have become a key way comic book movies build buzz, but few projects have done it as well as 2016’s Deadpool and its brilliant campaign spearheaded by Reynolds. Deadpool 2 is already upping the game, with Cable just the latest in a string of reveals, including a creative casting announcement for Julian Dennison (showing the actor on Deadpool’s back) and a first-look at Zazie Beetz’ Domino.

Liefeld has been around fandom long enough to remember outrage over Michael Keaton’s casting in 1989’s Batman, and 20 years later, he saw the backlash to Deadpool’s ill-fated first trip to the big screen in 2009’s much maligned X-Men Origins: Wolverine. So it’s nice to be on the positive end of fan passion.

“I’ve seen when fans give their thumbs-up and their thumbs-down. Their condemnation and their praise. Josh as Cable, it’s been 100 percent euphoria, praise, excitement,” said Liefeld.

Liefeld’s social media accounts haven’t blown up like this since the 2015 first reveal of Reynolds as Deadpool, and he playfully brushed off complaints some fans have had about the number of guns Cable carries in the photo (“How many guns can you have in one photo? Come on man,” Liefeld said with a laugh).

Heat Vision also caught up with Deadpool 2 actor Stefan Kapicic, who is returning as Colossus. He hadn’t seen Brolin in costume before this photo, which was released as the actor enjoyed his morning coffee and was scrolling through Instagram.

“This is just the beginning of amazing things that are coming,” said Kapicic, careful not to give away anything he shouldn’t. “Cable is one of the characters I was raised with. … Cable’s face, with all the scars and the eye and the haircut. It’s like I’m seeing the comic book Cable.”

'Deadpool 2': Why Does Cable Have a Teddy Bear Sidekick?

Brolin has positioned himself as the king of summer 2018 with his work as Thanos in Avengers: Infinity War, coming out on May 4, just one month before Deadpool 2‘s June 1 release. How popular is Brolin among fans? He stole the thunder away from San Diego Comic-Con, when one week before the July convention, the actor was the centerpiece of a D23 Avengers panel. In a surreal moment, the actor came out very much looking like Cable (buff and sporting a cool new haircut), but was acting very much like Thanos (giving his Avengers co-stars hell). “Drax ain’t shit,” Brolin deadpanned after Marvel Studios head Kevin Feige suggested Dave Bautista (who plays Drax in Guardians of the Galaxy movies) might be someone to worry about.

Liefeld’s phone immediately blew up, as friends watching the presentation texted him that Cable had invaded the Avengers panel at D23.

“Between him being ushered through the Kevin Feige regime and the protection and the special care they are going to take care of him with Thanos, and then over here with Ryan and [director] David Leitch and Fox ushering him as Cable, I’m not sure anybody is going to have a better four weeks next year,” said Liefeld. 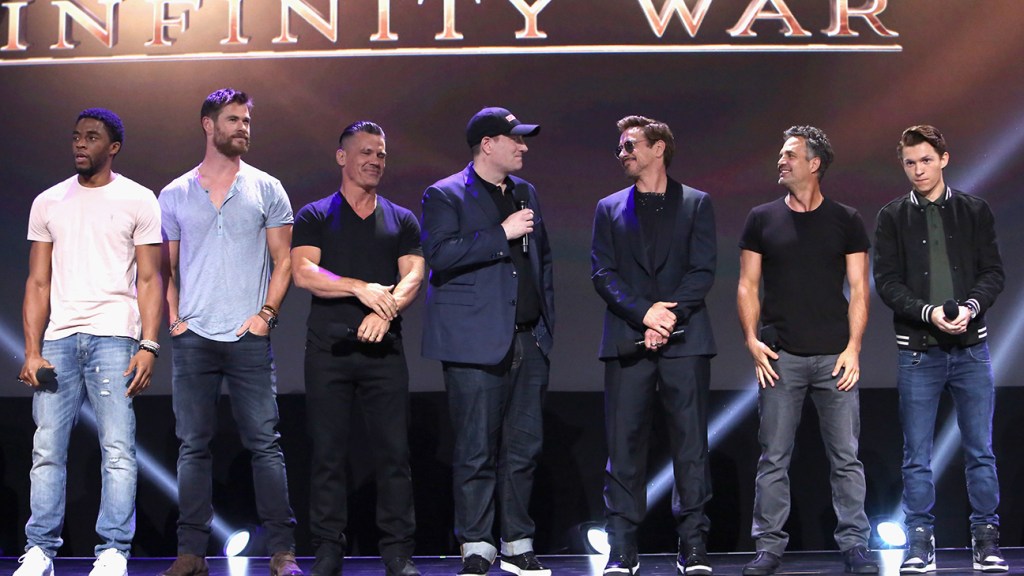