Something sinister has been building across Fox’s X-Men franchise. Magneto, Sabretooth, Lady Deathstrike, Stryker, Trask and his Sentinels, Apocalypse, Dark Phoenix – most of the X-Men’s greatest foes have been brought to life on film, many of them more than once. Despite the fact that the manner in which some of the X-Men’s rogues have been brought to screen hasn’t always measured up to their comic book counterparts, the X-franchise has done an admirable job pulling from both major and minor villains over the course of 18 years, and counting. While there are plenty of X-Men stories left to tell, there is arguably only one great villain left who has yet to make his appearance on film: Mister Sinister. With direct references and allusions made to the character in X-Men: Apocalypse (2016), Logan (2017) and this past weekend’s release of Deadpool 2 (2018), it’s clear that Fox, and franchise producer Simon Kinberg, have major plans for the character. But with the looming Fox-Disney merger, will they get to tell his story?

First appearing in The Uncanny X-Men No. 221 in 1987 (though mentioned earlier), Mister Sinister is the creation of Chris Claremont and artist Marc Silvestri. Like most X-Men characters, he has a complex backstory that has only grown more intricate through the years. Born Nathaniel Essex, Sinister was a Victorian era contemporary of Charles Darwin. He first popularized the idea of the mutant genome, an X-Factor, which in his modesty he termed Essex Factors. After being ostracized by the scientific community, Essex became a true gothic villain, experimenting on corpses and the homeless population in order to unlock the mutant genome and speed up the process of evolution. Eventually his experiments led to him crossing paths and aligning himself with the world’s first mutant, Apocalypse, who unlocked his mutant genes and immortality, tasked him with destroying the weak through plague, and gave him a new name: Mister Sinister. 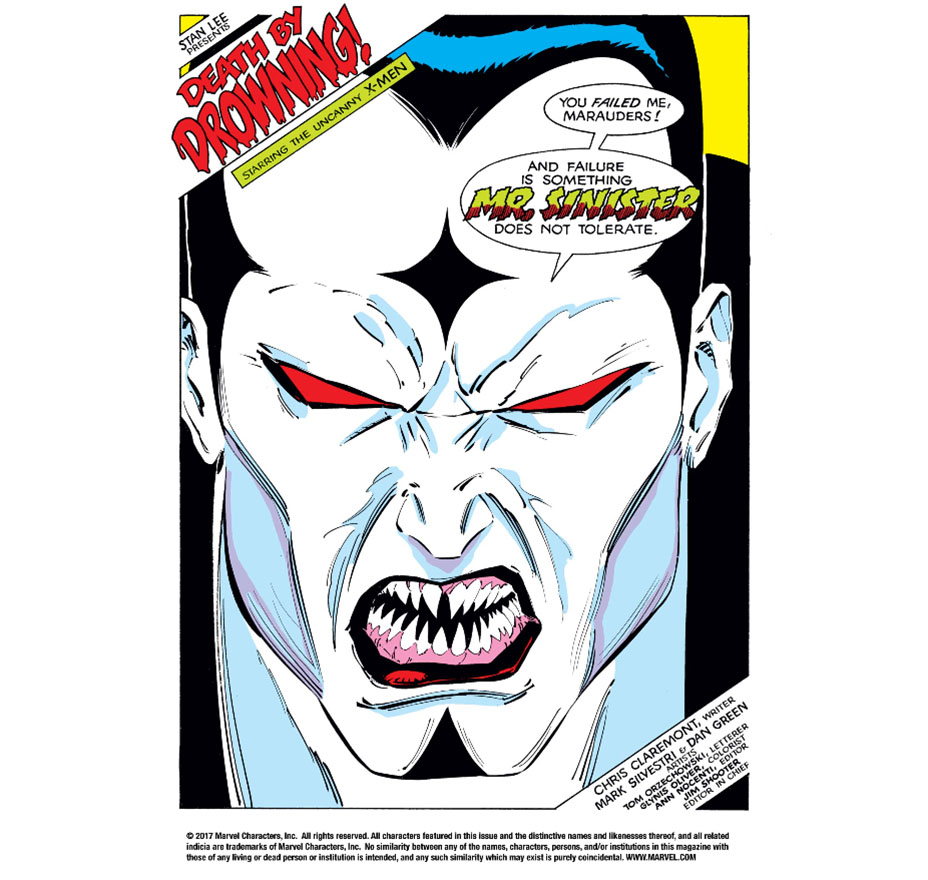 There’s a strong element of horror in Mister Sinister’s backstory that separates him from many of the X-Men’s other adversaries. Even his appearance — chalk-white skin, razor-sharp teeth and a red diamond on his forehead — make him seem more like a Clive Barker monster than a supervillain. And while he often factors into Apocalypse’s plans for world domination, his personal interests lean towards biology and an obsession with the lineage of Scott Summers, a.k.a. Cyclops. Sinister’s experiments, both physical and psychological on Summers, led to the creation of Cable (Scott’s son with a clone of Jean Grey). There’s a clinical coldness to Sinister that separates him from the passion of Magneto, the ambition of Apocalypse or the uncontrolled emotions of Dark Phoenix. His ability to threaten mutant kind across time has opened doors to some fascinating connections across comics. Sinister’s increasing presence in comics of the 1980s and early 1990s signaled an intentional shift in Marvel’s X-Men line. Claremont wanted to shake things up, and to move away from Magneto and his well and thoroughly beaten Brotherhood. Sinister’s arrival signaled a darker shift for Marvel’s merry mutants and showcased the comic company’s ability to weave complex, multi-titled crossovers anchored by a singular villain throughout their line of books.

While the X-Men films have been on an upswing since Matthew Vaughn’s X-Men: First Class (2011) offered a soft reboot of the series, they could use some fresh blood. As great as Michael Fassbender’s portrayal of Magneto is, there remains the fact that the franchise is facing difficulty maintaining his villainy. Bryan Singer’s X-Men: Apocalypse (2016) seemed to give the character closure, though Magneto will play a part in next year’s X-Men: Dark Phoenix, which sees Kinberg take on the role of director for the first time. But Apocalypse also did something else — it introduced Essex, by name only, into the franchise. The post-credit scene of that film sees a group of men collect data from the Weapon X facility where Wolverine (Hugh Jackman) was created, and a vial of Wolverine’s blood is placed into a case marked Essex Corp. Many fans were expecting to see Sinister show up in Logan (2017), with actor Richard E. Grant rumored to play the part. Ultimately, Grant was revealed to play Dr. Zander Rice, head of the Weapon X offshoot, Transigen. Given the vial of blood taken at the end of Apocalypse, and the existence of Wolverine’s genetically engineered daughter in Laura (Dafne Keen) in Logan, Rice and Transigen may not be entirely autonomous from Mister Sinister and Essex Corp.

The name “Essex” appears more prominently in Deadpool 2, this time adorning an orphanage for mutants that doubles as a mutant reeducation center. The Essex Home for Mutant Rehabilitation has ties to several characters in the film. Russell Collins (Julian Dennison) and Domino (Zazie Beetz) were both raised there at different times, and suffered abuse at the hands of the headmaster (Eddie Marsan). The pic also offers another possible, though subtle, connection to the larger X-Universe. Shortly after Deadpool arrives on the grounds, he encounters a child who seems unfazed by the police standoff happening right outside. The child, whom the credits list as Cereal Kid, just so happens to be portrayed by Luke Roessler, who plays a young David Haller on FX’s X-Men-related series Legion. For the uninitiated, Haller is the son of Charles Xavier and the world’s most powerful telepath. Essex is known for his fascination with mutant legacies and offspring, so it would not be a stretch for him to take interest in Xavier’s son. While Roessler’s casting may not have been intentional, the fact that Kinberg is involved in both Deadpool 2 and Legion as producer and executive producer, respectively, point to a larger game, even if it’s just one of the Easter eggs at the moment. Given these characters’ connection to the Essex Home and Cable’s existence, at least his comic-book one, tied to Mister Sinister, it seems we should expect the character to show up in the flesh soon. But the question remains — where and when?

Earlier this year, it was rumored that Jon Hamm was going to play Mister Sinister in a post-credit scene for the upcoming New Mutants movie, before Fox altered the plans and shifted the film’s release date to next year. It’s possible that Mister Sinister will show up somewhere in Fox’s other X-centric 2019 release, X-Men: Dark Phoenix, but that pic will have the characters dealing with enough already. This means that the most viable place for Mister Sinister to show up is in the films not yet in production. Gambit, which has seen its share of preproduction woes over the course of the past several years, is a strong possibility. In the comics, Mister Sinister has numerous ties to Gambit, with the master thief once working as his agent before joining the X-Men. Gambit, at least in theory, seems a bit small-scale for a villain like Mister Sinister, and if he did play a role, it seems probable that it would be a minor one.

This leaves us with X-Force, currently in preproduction with Drew Goddard at the helm. The film, which has already been confirmed to see Deadpool, Cable, and Domino band with several other teammates, seems like the perfect place for this darker-edged crew of heroes to take on a darker-edged villain. Not only does Mister Sinister now have ties to two of the confirmed members of the X-Force, it also would not be a leap to connect Sinister to the underground mutant facility that gave Deadpool his powers in the first film. These factors along, with the fact that Laura/X-23 served as a member of the X-Force in the comics, could enable the last several years of the X-franchise to all be tied together through Mister Sinister and his Essex Corporation. Unbeholden to time, Mister Sinister is the perfect villain for this franchise’s current modus operandi of telling stories that matter, continuity and timeline be damned. With the Disney buyout of Fox looming in the background, hopefully the groundwork of these plans come to fruition. Mister Sinister opens up a lot of possibilities for the X-Men franchise, in terms of his connections to the past, present, and future. Even after 18 years, it seems like these films are just starting to embrace their X-factor.

'Deadpool 2' Is a Secret Companion Piece to 'Logan'