Leaving the theater after Deadpool 2 probably left you feeling a lot of emotions, and at least one of them might have been confusion. For months, the promotional campaign for the movie impressed upon the importance of the X-Force, an all-new team of never-before-seen-in-live-action mutant heroes ready to take the X-Men film universe by storm with everyone’s favorite Merc With the Mouth at the helm.

Except that’s not exactly what happened — at least, not in the way we expected, and it may have some serious repercussions for the future of the Deadpool franchise.

The first thing that needs to be understood about the X-Force is that, as a team, it was a product of the times. Over in the comics, it was the brainchild of Deadpool co-creator Rob Liefeld, and the result of the same over-the-top “extreme” ’90s aesthetics that gave rise to characters like utility pouch-strapped and gun toting Cable. They were what you’d expect from the era: a group of X-Men offshoots who were designed to be edgier, tougher, meaner and more violent than their sanitized, family friendly cousins. Officially their goal was more along the lines of a black ops unit, going on secret missions, dealing with threats before they became problems, treading morally dubious waters and generally proclaiming that comics weren’t for kids anymore.

The team’s overall newness and the fact that many of the big-name X-Men still had to be safe for Saturday morning cartoons meant the rosters were comprised of traditionally C- and D-list characters. Short-lived as they were, almost every one of the members Deadpool 2 promoted were, in fact, actual members from the comics at one point or another. From Terry Crews’ Bedlam to Lewis Tan’s Shatterstar, the lineup was populated with Easter Eggs and winks to fans — even Shatterstar’s strange, half-explained origin from “Mojoworld” was a real thing — though the button-down wearing non-mutant Peter (Rob Delaney), sadly, was not.

Ironically, though they shared the same basic DNA, the same creator, and practically the same birthday (Deadpool popped up in February of 1991 and X-Force in April of that year), Deadpool himself was not a member right off the bat. He would periodically pop in to help or hinder, but didn’t become an official team player until 2009.

Now, in typical Deadpool fashion, it turned out that the roster of heroes we’d been led to believe would make up the team were actually a whole bunch of cannon fodder. Not five minutes after they were each introduced, they met their grisly and totally avoidable ends in a series of Final Destination style accidents — all except Wade himself and the “lucky” Domino (Zazie Beetz) who skated through the bloodbath unscathed. The X-Force, apparently, was over before it even began.

That is, until, the real X-Force came together. Made up of survivors Deadpool and Domino, as well as Cable (Josh Brolin), Negasonic Teenage Warhead (Brianna Hildebrand), Colossus (Stefan Kapicic), Yukio (Shiori Kutsuna), and the unlikely recurring cab driver Dopinder (Karan Soni), a new team rose from the ashes of the first just in time to save the day. Sure, they may have never called themselves the X-Force officially, but the signs couldn’t have been clearer. Even Wade’s costume, singed to look black and white for the entire final scene, echoed the outfit his comics counterpart wore during his first official X-Force title. 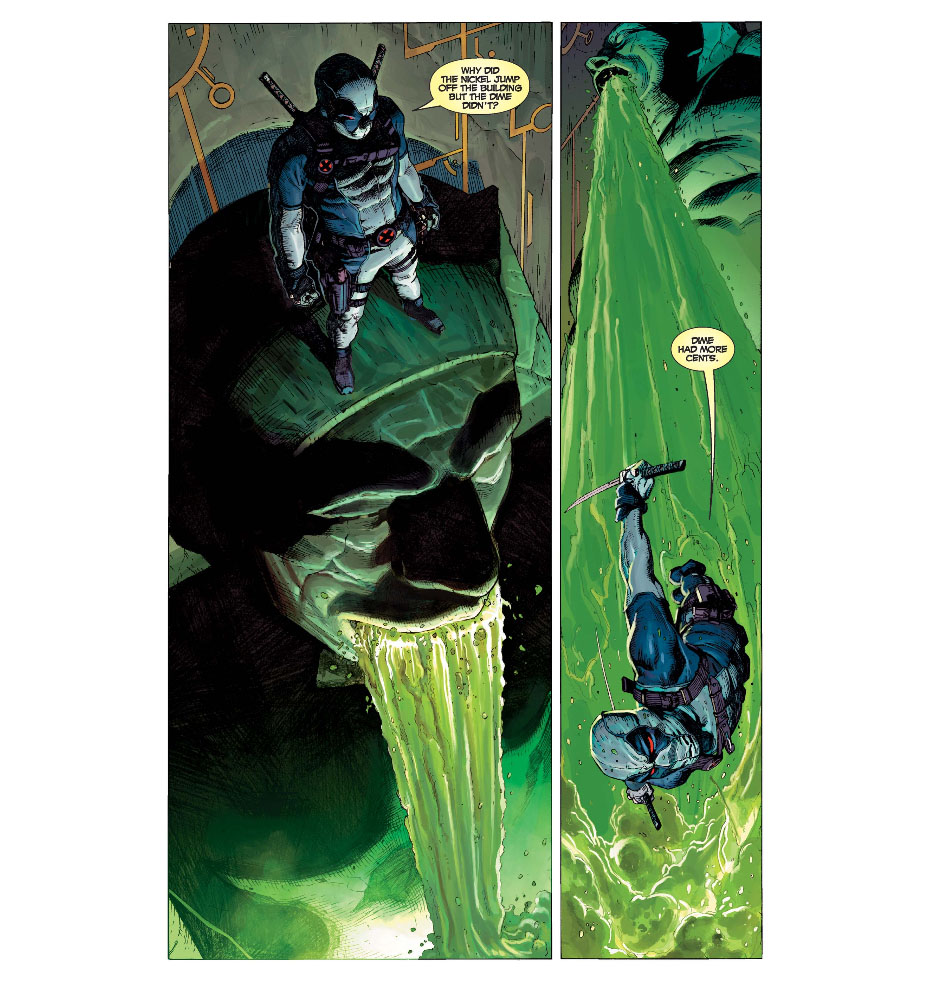 So what does this mean for Drew Goddard’s follow-up X-Force film? Well, a good guess would be that it’s going to be an X-Force the likes of which we’ve never seen in the comics. The trappings of the ’90s have been very literally stripped away in a full-on character massacre, and what we’re left with is a post-modern take on the same basic principles: a team of characters set out to subvert the superheroic norm. In 1991, that meant self-serious ultraviolence and really embarrassing hairstyles. In 2018, in the age of the Marvel Cinematic Universe, it means something else entirely.

In adopting the Deadpool franchise’s overall tone of self-award parody and irreverence, the cinematic X-Force could very well adapt to fit the genre niches that aren’t currently being served by Marvel Studios’ superhero movie juggernaut.Though the team’s place in the X-Men movie continuity will likely remain at least somewhat ambiguous — Deadpool isn’t really a character that cares much for the sanctity of shared cinematic timelines, that much is clear in Deadpool 2’s post-credits stinger — an action-comedy X-Force moviecould reinvigorate the Fox line the same way Marvel’s experimentation with genre benders like Thor: Ragnarok and Spider-Man: Homecoming provided booster shots to the MCU.

Sure, Deadpool’s new X-Force — and whatever percentage of the cast ends up returning for Goddard’s X-Force outing — might not be the most faithful representation of the source material, at least not in the way the immediately expandable line up was, but they are a pretty genuine stab at updating it.

The Villain Who Deserves His Close-Up After 'Deadpool 2'