In 2015, amid a global refugee crisis and fears about national security, Israel was experiencing multiple daily domestic attacks. Filmmakers Asaf Sudry and Tali Shemesh decided there was a story to tell in them. Death in the Terminal, running slightly under an hour, is a story about the 18 minutes after a terrorist opened fire in a busy bus terminal on Oct. 18, 2015, in Be’er Sheva, Israel.

Megan Ellison’s Annapurna and screenwriter Mark Boal, who teamed up for The Hurt Locker and Zero Dark Thirty, served as executive producers on the doc, which is the first for Boal’s Page1, a production company started by the former journalist that seeks to develop and distribute nonfiction storytelling. It will be distributed on Sept. 6 on Topic, the digital destination for projects from First Look Media (the production company behind the Oscar-winning film Spotlight) in partnership with BuzzFeed News.

Death in the Terminal is told through inter-cutting security footage with video from mobile phones and eyewitness accounts. Using this Rashomon style of storytelling, everything is folded together to create a full — if not, at times, contradictory — picture. “It’s not a political movie,” explains Shemesh. “You have all of these voices and points of views [in the news]; the truth has become so elusive. We wanted to offer a point of view that wasn’t selling anything.” 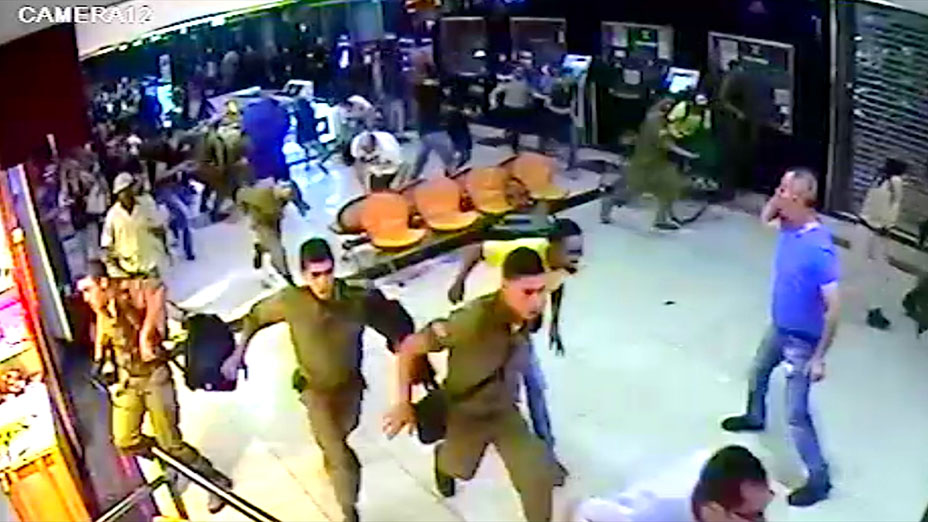 A month after the Be’er attack, Sudry and Shemesh went to the bus terminal in search of eyewitnesses. “People resent the media here,” explains Shemesh of people’s initial aversion to the directors. “It took us time to convince people that we were not looking for a headline.”

Sudry and Shemesh also knew they needed footage from the terminal’s security cameras to get the full picture, but the police would not release anything due to an ongoing criminal investigation. The security footage was eventually leaked to the filmmakers, at which point they started a minute-by-minute reconstruction of the attack.

Seen in the footage is the chaos after the gunman opens fire, killing a 19-year-old Israeli soldier. Also seen is a 29-year-old asylum seeker from Eritrean being mistaken for a second terrorist, shot in the back four times by a security guard and repeatedly kicked by bystanders and a soldier who think he is responsible for the attack. “It is a group of people in a very close place, and it becomes a boiling room,” said Sudry of the footage. “Those people who thought they were saving their friends — saving their nation — just became criminals in seconds.”

Touching on larger themes of racism and national identity, Sudry and Shemesh believe their work “will speak to people around the world — in the U.S., Europe and the Middle East.” In the 24/7 news cycle, Sudry and Shemesh are convinced that the human element gets lost during the constant onslaught of coverage of terrorist attacks: “You are watching human nature under conditions of survival and hysteria. The reaction of people becomes the real story.”

A Filmmaker, His Actresses and an Alarming Pattern of Behavior: "He’s Getting Some Sort of Revenge on Women"