After making a screen debut in the mid-1970s and building a resume that boasts more than five dozen credits, Delroy Lindo is now experiencing a banner awards season filled with accolades and critical praise for his work in Spike Lee’s Da 5 Bloods. He added another trophy to his mantle Tuesday night during the Critics Choice Association’s Celebration of Black Cinema.

Jonathan Majors, who co-stars with Lindo in the Netflix film, presented the Career Achievement Award by praising Lindo for how he commands the screen with a regal presence, humanity, integrity and humor. “I can honestly say that I would not be the actor I have become nor the actor I want to be without the presence, without the career, without the artistry of Mr. Delroy Lindo.”

Lindo’s work was put on display during a clips reel that featured Lee’s Da 5 Bloods, Clockers, Congo, Soul of the Game, Romeo Must Die, The Cider House Rules, Malcolm X, Gone in Sixty Seconds, The Last Castle, and others. In accepting, Lindo said that one of the things he’s most proud of with Lee’s film is how it centers Black and Vietnam veterans as their stories have largely not been told.

“Broadly speaking, the contributions of African-descendant people to world history have historically not been included so I accept this award in the spirit of inclusion and the fact that we are in a time, I hope, in which the importance of the contributions of Black people, African descendant people, the importance of those stories will come much more to the forefront and be included in the context of world history,” he said.

Smith kicked off the virtual show. She said that despite the challenges of 2020, there was a lot to celebrate for Black cinema with record number of films about the Black experience and by Black female directors. “The future of film is in very good hands,” she said.

Aaron Sorkin followed by presenting the Breakthrough Award to Abdul-Mateen for his work in Netflix’s The Trial of the Chicago 7. “Watching him in the moments before the camera rolled was like watching a weather system gather,” praised Sorkin. Abdul-Mateen returned a compliment to Sorkin and thanked the man he played, Bobby Seale.

He then said the message of the film comes down to this: “What are we willing to do when times get hard, what are we willing to stand up for and where are we going to be when it’s time to fight? Hopefully, the film tells us when it comes to it, we will find ourselves on the side of right.” 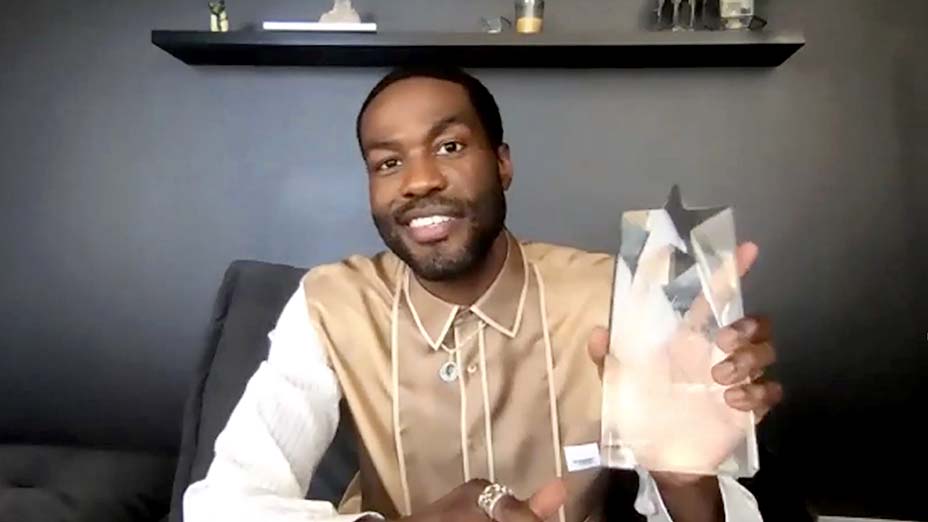 Lee Daniels, who directed and produced The United States vs. Billie Holiday, presented to his star Andra Day and in doing so, said that it seems that she’s not acting in his film but rather, “the spirit of Billie Holiday is living in her.” Day accepted and thanked Daniels for taking her on the ride with him. “I am not sure I am an actress but I know that in your hands, I am.”

She also gave a special shout to acting coach Tasha Smith. “You are my sister for life,” said Day, who also name-checked every member of the cast. “It’s not often you get to meet somebody who is as committed to your success as you are. I love you forever and beyond.”

The Ensemble Award, presented by One Night in Miami writer and executive producer Kemp Powers, went to Kingsley Ben-Adir, Eli Goree, Aldis Hodge, and Leslie Odom, Jr. who played Malcolm X, Cassius Clay, Jim Brown and Sam Cooke, respectively. They each took a turn offering acceptance speeches, largely praising the leadership of director Regina King and each other for the collaboration. 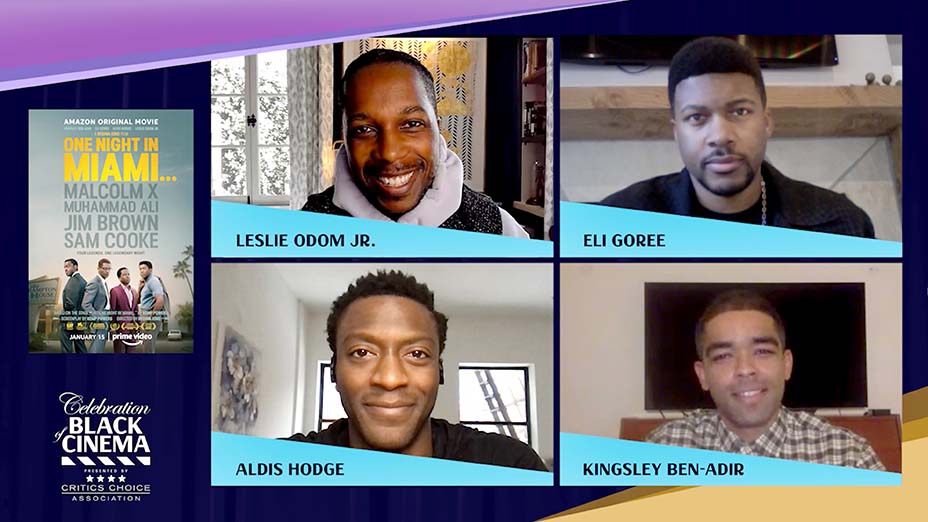 Taraji P. Henson presented the Next Gen Award to Malcolm & Marie stars Zendaya and John David Washington. “As a young Black woman, to be able to create something and believe in myself — that means financially, that means creatively — I’m so lucky that I got to do it beside such an incredible actor and scene partner but also my fellow producer, John David Washington,” offered Zendaya. For his part, Washington said the opportunity to explore the power and intelligence of Black love through the lens of an artistic couple in the industry was a dream come true. “I will remember it for the rest of my life — along with receiving this.” 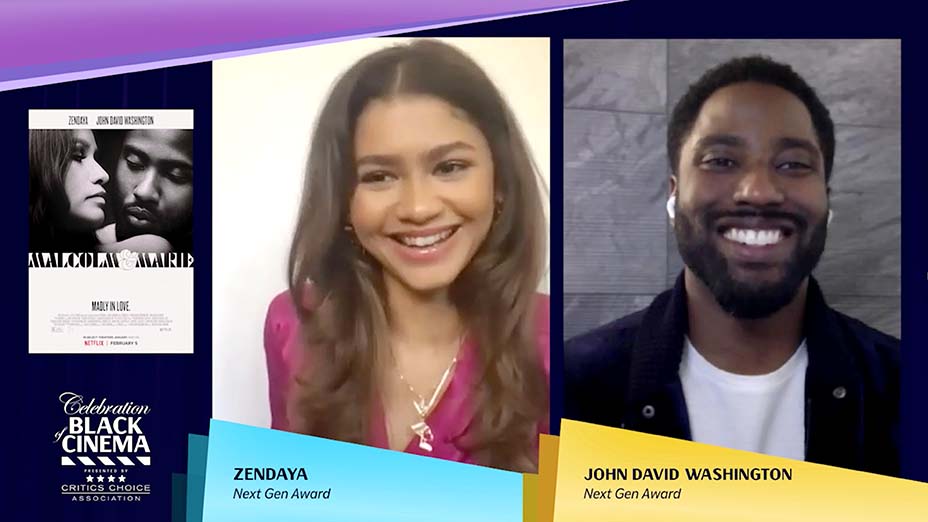 LaKeith Stanfield, Daniel Kaluuya, Dominique Fishback presented the director prize to their Judas and the Black Messiah filmmaker Shaka King. In accepting, King thanked Warner Bros. for being the only studio willing to partner with the Judas team on “this radical vision and for helping us craft a compelling and heartbreaking but also entertaining piece of cinema.” He also thanked and acknowledged the more than 15 Black Panther “now elders” who “remain unjustly imprisoned or in exile,” he said. “Free them all now.” 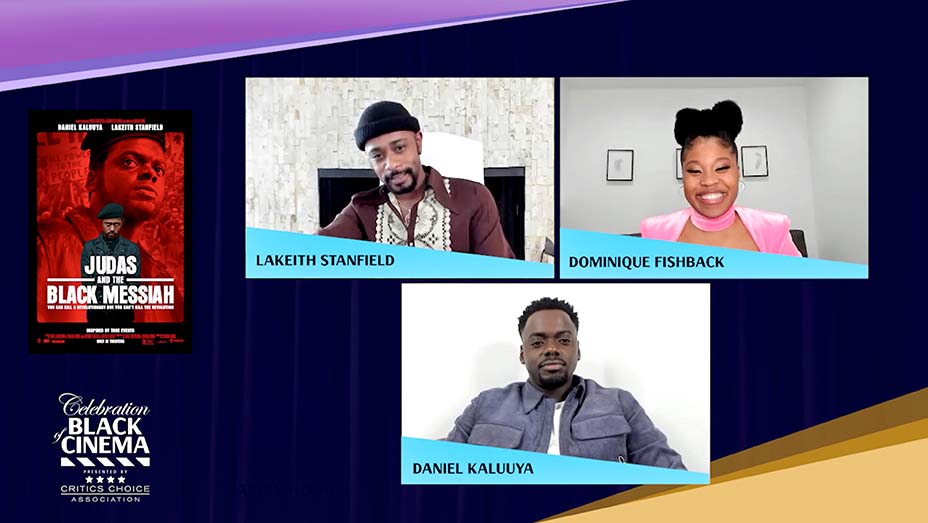 Michael Ealy presented The Producers Award to John Legend and Mike Jackson for their Get Lifted Film Co. following a year that the company’s efforts including Giving Voice and Jingle Jangle: A Christmas Journey. Legend said that when they started the company, they named it Get Lifted as a mission statement of sorts to lift up creatives and content that could inspire and move audiences. “We feel so fortunate that we’ve been able to do that,” said Legend, who also performed his song “Never Break” from the doc Giving Voice.

The Social Justice Award was presented to Tommie Smith by actor and activist Jesse Williams, who called the Olympic medalist a friend, mentor, hero, inspiration, and “one of the bravest, most resilient men that I’ve ever met in my life.” Smith is the subject of the Glenn Kaino and Afshin Shahidi documentary With Drawn Arms that traces his life as he looks back on the moment when he raised a fist after accepting a medal at the 19868 Olympic games in protest of racial inequality.

Smith said he felt a responsibility to bring recognition to what was going on then while pointing out that inequality is as important of an issue today. “I hope our film With Drawn Arms will generate conversation and serve to bring forward something that inspires others to cross yet another bridge.”

Nnamdi Asomugha presented the Actor Award to his Sylvie’s Love co-star Tessa Thompson. “As committed as she is as an artist and collaborator, she’s an even more dedicated friend and human,” said the actor who also produced the film alongside Thompson.

“This is a time when, once again, we are talking in this nation and globally about the value and dignity of Black life and I believe that the stories that we tell about Blackness in this moment are even more resonant,” said Thompson in accepting.

She then name-checked the actresses on whose shoulders she stands: Diahann Carroll, Ethel Waters, Juanita Moore, Ruby Dee, Hazel Scott, Eartha Kitt, Pearl Bailey, Dorothy Dandridge, Beah Richards, Lena Horn, Hattie McDaniel, Fredi Washington, Nina Mae McKinney and countless others. “When I see this,” she said, looking at her trophy. “I see you. And to all the incredible Black women gracing our screens now, I see you, and I am because of you.” 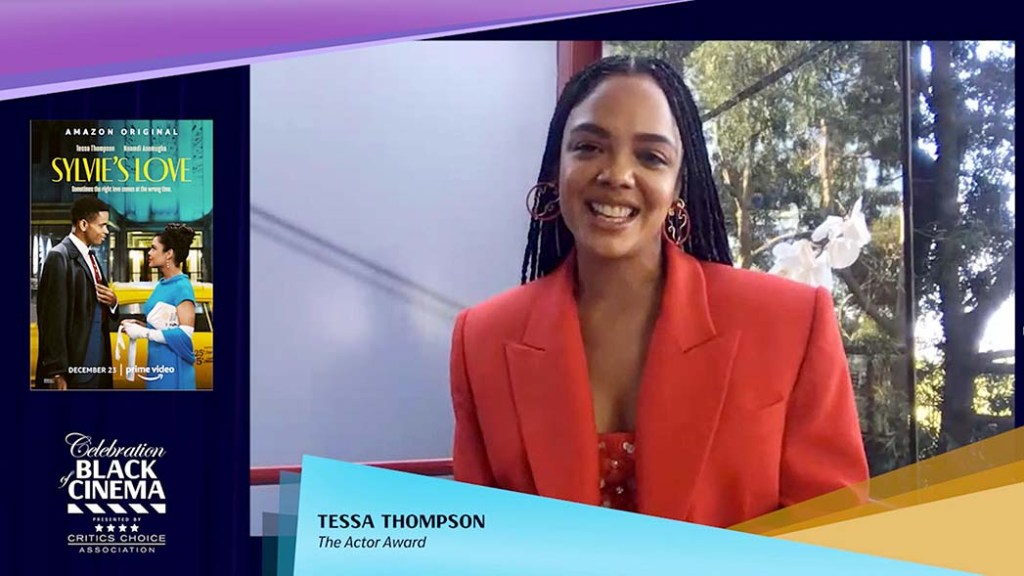 George C. Wolfe, who directed Ma Rainey’s Black Bottom, presented a Performance of the Year Award to the late Chadwick Boseman who stars in the Netflix release opposite Viola Davis. Wolfe also accepted on behalf of Boseman’s family but not before telling a specific story about what Boseman was like on set.

He recalled how 17-year-old actor Dusan Brown was preparing for his big scene, one that found the camera just inches from his face. “It was the most intimidating, horrible dynamic you can have,” Wolfe said with a laugh. Davis and Boseman were looking on as was producer Denzel Washington from a nearby monitor. Brown later told Wolfe that his nervousness took over until Boseman took him aside to tell him that they were all there for him, to support him. “What an astonishingly generous, incredible thing for someone to do for another actor. That was Chadwick. He was so present — not just as an actor, but…as a human being.”