Pokemon: Detective Pikachu featured so many Pokemon that casual fans likely were searching their mental Pokédexes for the answers. This eclectic mix of monsters helped make Ryme City work, which is exactly why the film’s decision to include, say, the more recently-added baby eagle Rufflet over the classic poison sac Koffing, is one worth looking into.

First, let’s look at just who made it into the film. The Pokémon represented in the trailers include a humorously migraned Psyduck, a blustery Charizard, a barista Ludicolo, some scary shuriken-tossing Greninja (pictured below), the starters from the first generation of games (Bulbasaur, Squirtle, and Charmander), as well as classics like the legendary Mewtwo and — of course — the detective himself, Pikachu (voiced by Ryan Reynolds). But there are also plenty of background monsters for those with a keen eye. Snorlax, Pancham, Pangoro, Emolga, Rufflet, Sneasel, Doduo, Arcanine, Growlithe, Purrloin, Golurk, Joltik, Totodile, Audino, Golem, Comfey, and Kingler can all be spotted wandering around the diversely-populated city. 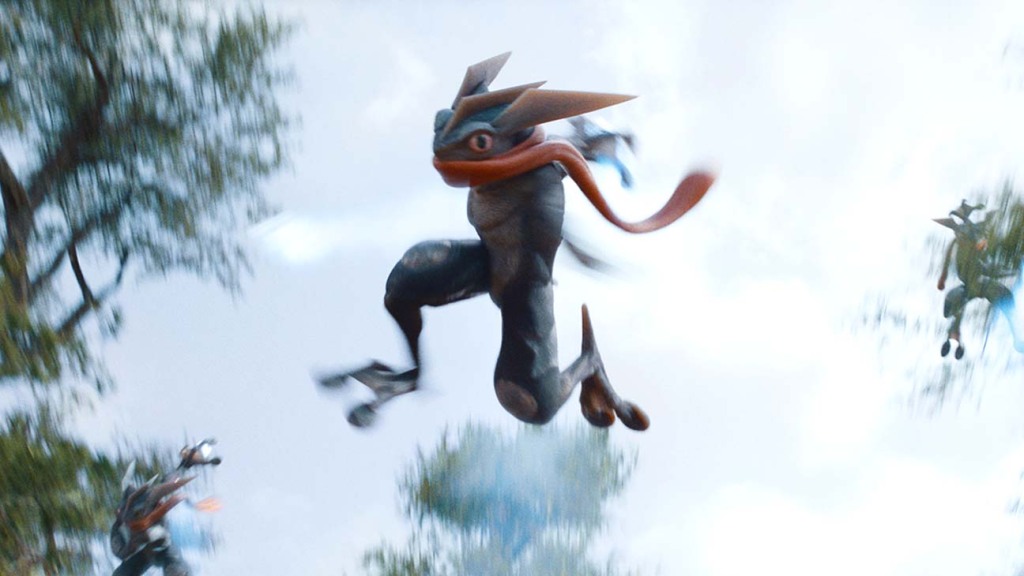 Others are worked in more like cameos, briefly showing off a recognizable element or two before the film moves on. Mr. Mime has an entire interrogation while Jigglypuff sings to a sleeping audience (like in the anime!). Treecko sticks to windows, Squirtle aids firefighters, and Octillery works a food cart (hopefully not selling calamari). Grumpy dog Snubbull lends Ken Watanabe’s Lieutenant Hide Yoshida a little extra intimidation, while an Eevee’s evolution into a Flareon gives a little visual and thematic flair to a speech from Howard Clifford (Bill Nighy).

Aipom, Loudred, Gengar, Blastoise, Gyarados, and Slaking all get affected by the mysterious substance R and become violent — whether that means a bunch of monkeys chasing Justice Smith’s Tim Goodman or an underground Pokémon fight bursting into chaos. Lickitung and Cubone are included mostly as jokes, as the former torments Tim with its humongous tongue while the latter is a lonely analogue to our hero with an outrageously pathetic backstory. Yes, it’s wearing the skull of its dead mother. No, Tim doesn’t wear the skull of HIS dead mother at any point in the film.

Some are even in major action sequences, like an epic group of Torterras that contribute to the film’s disaster film-like landslide. Morelulls accompany Bulbasaurs to help heal Pikachu while Pidgeotto provides an airlift when our heroes need it most. And Ditto? The shapeshifting blob Pokémon (that’s only move is Transform) has a fitting and satisfying twist that sees it turn into multiple other Pokémon (like the bison-esque Bouffalant and burly Machamp) — indistinguishable except for its unchanged dot eyes. Phew, that’s enough for Detective Pikachu to make a Pokémon Rap of its own.

The collection spans generations I – VII of the games, with the regions of Hoenn, Kanto, Johto, Sinnoh, Unova, Kalos, and Alola all represented. That’s everything through Pokémon Sun and Moon, which actually came out after Detective Pikachu’s source game. However, this movie is hitting theaters years after Sun and Moon were remade, so they got to futz with the timeline a little bit. Now that we know which Pokémon made it, all that remains is the question of how, out of 809 Pokémon (not including the three starters shown from the upcoming Sword and Shield games), did this strange spread make the cut? Is it all purely cosmetic? Would a live-action version of Banette (a ghost with a zipper for a mouth) simply be too freaky? Did Legendary try to create a feasible group of creatures that could cohabitate? 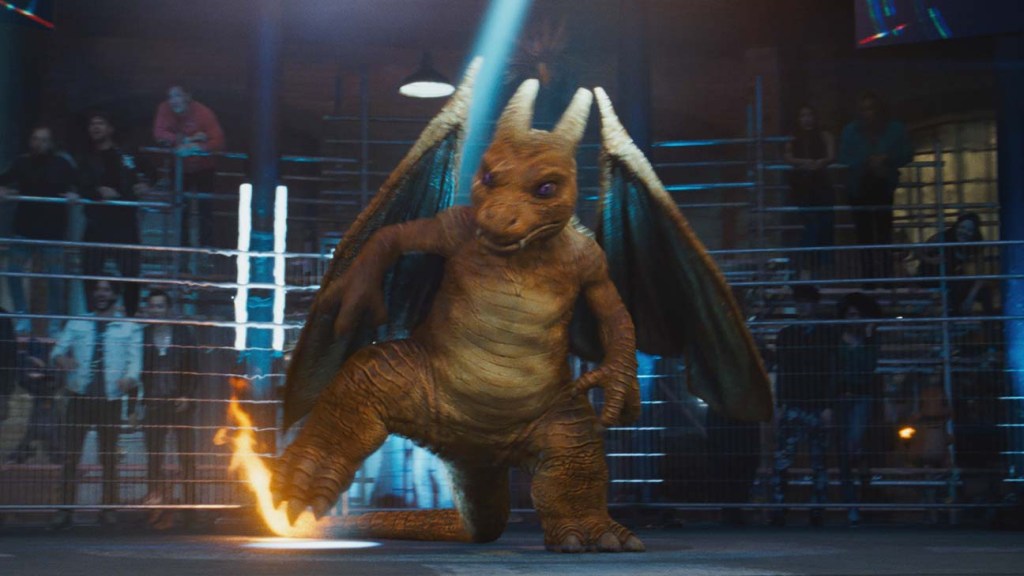 First, let’s turn to the source. Some Pokémon, like Charizard (picutred above) and Mewtwo, were major players in the original Detective Pikachu’s plotline and factor in the same way here. Charizard is a fearsome adversary — though Magikarp manages to him former a lesson thanks to a well-timed evolution — while the godlike Mewtwo has been teaching fans about not messing with nature (AKA Pokémon) since the first animated Pokémon movie. That weird pineapple duck Ludicolo (pictured below) canonically helps the game’s Pablo Millan run the Hi-Hat Café. Even the aforementioned Eevee and Torterra showed up in the game’s prequel book, Detective Pikachu: Episode 0—Eevee’s Case. 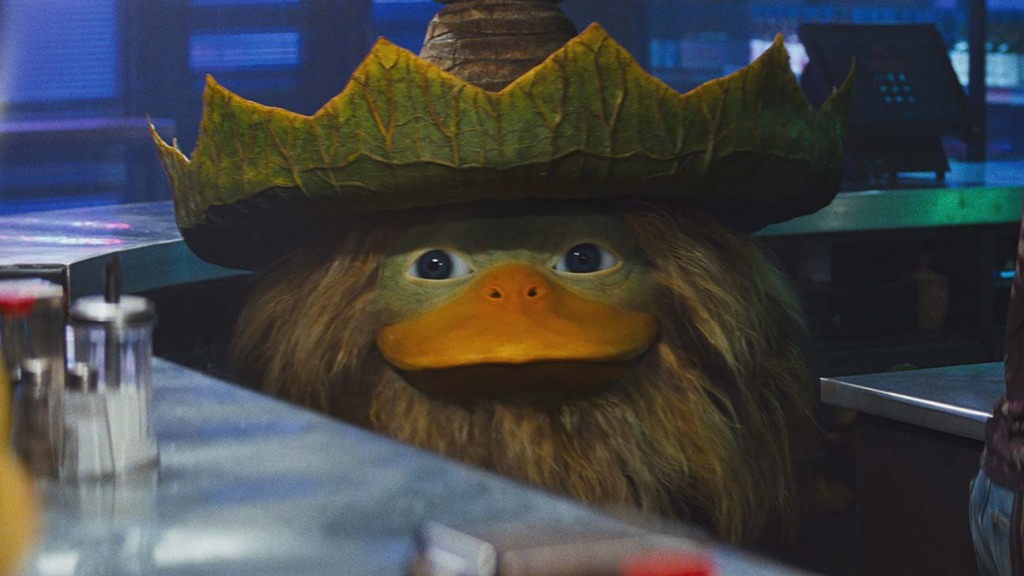 Yet, the game also featured a Glalie — sort of an angry floating Zardoz-like ice head made from the “distress and regrets of a stranded mountaineer” – and a Cofagrigus – a ghostly sarcophagus that eats people and turns them into mummies — but they didn’t show up in friendly Ryme City. So what gives? Has this strange collection of Pokémon from across multiple generations and in-game continents found a viable and mutually beneficial ecosystem within the neo-noir setting of Detective Pikachu?

Partially yes, according to parts of the film’s plot. Ryme City was designed with Pokémon and human cohabitation in mind, so it makes sense that the weirder, scarier, and logistically improbable monsters simply don’t fit in. Sorry, giant rock snake Onix and ghost sword Honedge. Y’all just don’t play well with others. From a more cynical perspective, it’s likely the included creatures were not only the ones that were most popular, but those that were cutest, easiest, and most animal-like.

Greninja is a big deal in the Pokémon world, as the one caught by anime hero Ash Ketchum is a big enough deal to have crossed over into both the canonical Pokémon games and inspired a fighter in Nintendo’s Super Smash Bros. Mr. Mime is weird and scary, but a natural source of comedy as well as something a layman can relate to. A mime? Sure, anyone can get that. Eevee and Snubbull are basically just dogs (even Flareon is just a fire dog) while many of the others — the monkey-like Aipom, pandas Pancham and Pangoro, flying squirrel Emolga, birds Rufflet and Pidgeotto, and many more — all have real-world fauna they relate to.

As I’ve argued before, Detective Pikachu is all about acclimating non-Pokéfans while giving out as much fan service as possible, so erring on the normal side makes sense. Some of these Pokémon have plot points that work in their specific traits and others are simply there for a good gag, but the selection of monsters on display here, ranging from the strange-yet-one-note Lickitung (big tongue) to the nearly-real Magikarp (regular fish), are selected to go down smoothly — in both the narrative’s setting and the newcomer’s mind.

How Warner Bros. Sold the Return of Pokemon to the Big Screen