Too much screen time: Parents agonize about it, and kids scream when it’s taken away. Now with schools shut down across the globe, many children are getting more time than ever with devices, whether as part of homeschooling via apps and classroom Zoom calls or simply because parents who are juggling too much during lockdown park their progeny in front of them.

Now a new documentary, Screened Out — available Tuesday on demand — makes a powerful and relatable case that limiting screen time is important for the well-being of kids. The director, Jon Hyatt, has three children himself. As he shares in the movie, the Toronto-based filmmaker (who runs the production company Hyatt Bros Films with his two brothers Michael and Richard) removed social media from his own life before making the film, including deleting his Facebook account. He and his wife also decided to limit their children’s screen time to weekends only ­­— as many technology executives do with their own kids — though he does admit they have recently allowed the kids some time on weekdays during stay-at-home orders.

Cannes Market to Put Cinema's COVID Rebound to the Test

Hyatt — making his feature-length documentary debut following a career making a shortform videos and branded content ­­— travels through the course of the doc to meet and speak with a variety of experts in such topics as pediatrics, marketing, video games, technology and mental health to present an image of screen time as an addiction that’s’ been created by design by large tech companies. Hyatt admits that many of the effects of constant use of these immersive platforms is unknown, partly because tech companies keep their data (including use by children and teens) closely guarded. That’s why the filmmaker has also created a social-impact campaign to support the CAMRA Act, a proposed bill in the U.S. Congress by Rep. Jamie Raskin (D-MD) and Rep. Ted Budd (R-NC) that would authorize and fund the National Institutes of Health to create a research program on the effects of technology and media on kids and adolescents.

Hyatt recommends that families looking to limit start small. “Try a Sunday with no devices,” says the director, who talks below about the genesis of his film, released by Dark Star Pictures, and whether he views screen time as an addiction. 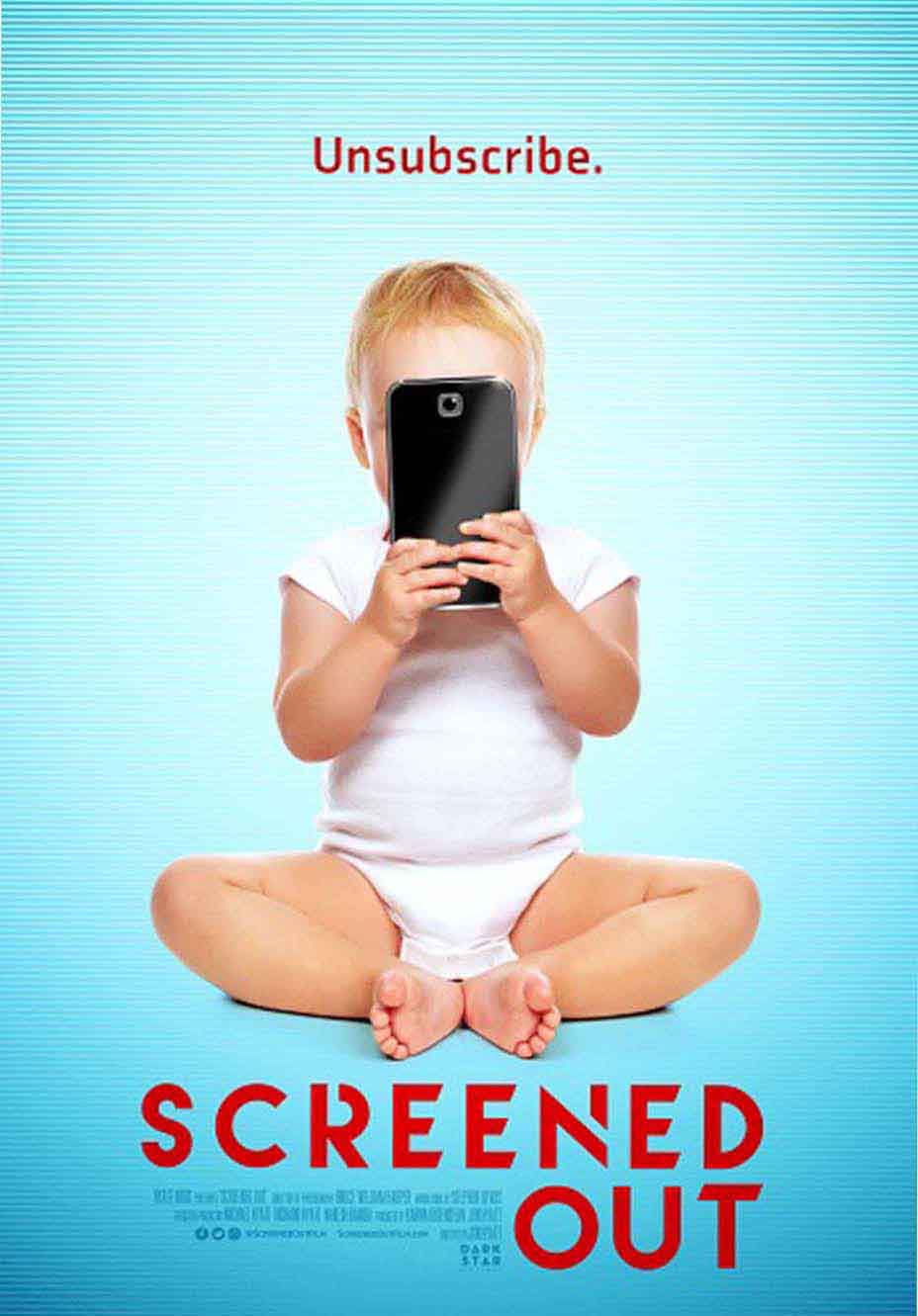 How did the film get started?

I was hanging out in Florida with my older brother and his kids. They were heavy into screens at the time. He was reading this book called Glow Kids [subtitle: How Screen Addiction is Hijacking Our Kids — And How to Break the Trance] by Nicholas Kardaras. We actually visit him in the film. I started reading the book. It was absolutely terrifying. I realized if you take the screen away, the kids lose their minds. They want to get back on it right away. There must be something going on here. So I wanted to take a step back and see what it was doing to my brain and what it was doing to my kids’ brains.

How much were you using social media?

I was on Facebook all the time. I was checking my Instagram. I couldn’t put the phone down. My kids would talk to me and I’d be ignoring them.

That was 2017. The idea of making this documentary just hit me. I got off Facebook. When I first got rid of Facebook, I deactivated it and then I deleted it. You just go, ‘What did I do?’ It’s like you killed part of yourself. It’s an odd feeling and Facebook does this funny thing when you delete it, they show you pictures of your friends — your friends are going to miss you. That is messed up. They are saying — almost in a cult-like way — you are going to be cut off from your friends. It’s awful and my friends don’t know that message is there. I also got off Instagram. It just kind of freed up my time. I feel like I wasted a lot of my life on social media just looking at stuff.

Did you notice a change afterward?

I really can sit with my thoughts now and I can control what I want to do. I’m not as impulsive. I don’t have as much anxiety. I’m taking better care of my health. I listen to my children more. I put my phone down and leave it somewhere in the house. It’s had a lot of positive benefits. It’s funny because people will say, “How do you know about things? Aren’t you missing out?” I’m not. I talk to all the friends who matter. My wife is still on it [social media] and she has no interest in getting off. But she’s trying to regulate her time on it, which is proving to be difficult for her. And she knows that it’s eating up her time. She wants to keep in communication with other moms in the neighborhood and things that they are doing.

Were there any impact on your kids?

Like we show in the film, we just allow our kids to have screen time on the weekends. Kids will fight in the beginning. As time went on, they became a lot more creative. We got them enrolled in music lessons and they are excelling very quickly on their instruments to the point where they just go and play them. You don’t have to remind them. They play with each other more. One of the big points we wanted to make in the film is that good creators are people who have experience with that [in contrast to] just following algorithms that are set out by these companies. 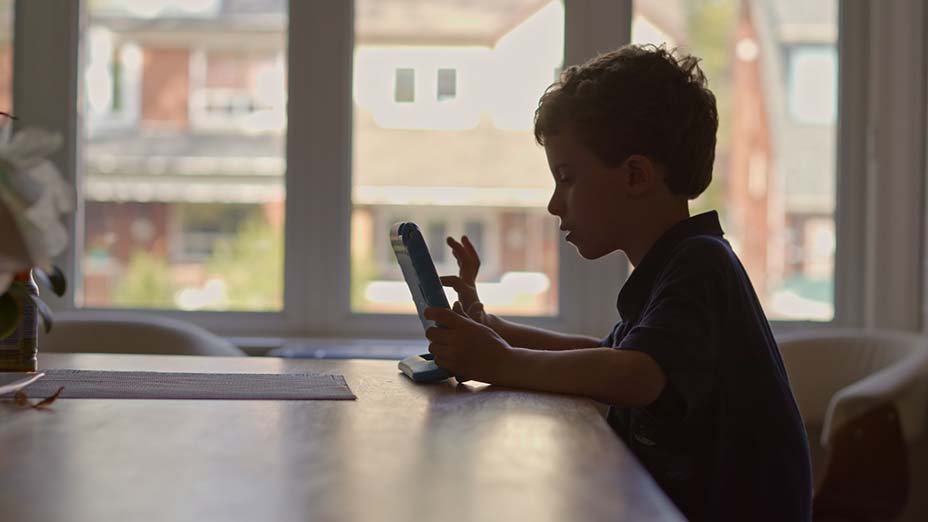 Have you let them have any more screen time during the COVID outbreak?

We have given them some screen time [on weekdays]. We give them an hour. They have to work up to it. They have to have playtime and go in the backyard and do their chores and make their bed. They have to earn it and they can lose it. I’m not going to cut my kids off from technology, even though it’s problematic but I’m limiting it as much as I can.

Do you count school videos and Zooms?

One of the big points made in the film is that the technologies are designed to have no end point. That’s something I really notice with my own daughter watching YouTube. She’s constantly also paying attention to what else is in the scroll to hop to next.

That was a great thing that [marketing expert] Adam Alter said, that taught us about how you know it’s an arms race. One does it and then they all follow suit. You see it across all these platforms. It’s no secret that the industry hires these behavioral scientists and engineers to find ways to keep people on these devices. And one of the ways is to keep it endless.

What is the recommended maximum amount of screen time kids should be allowed?

The American Academy of Pediatrics basically says between zero to 18 months, no screen time. Eighteen to 24 months, maybe half an hour of FaceTime kind of stuff, speaking and waving to grandma. Two years to five years, an hour. One study done at the Cincinnati Children’s Hospital Medical Center looked at 50 kids who went over the recommendation and they found that there were issues with brain structure that had to do with learning and retaining information. The big problem is that we’ve only been in this world about 10 or 12 years.

If you talk to Dr. [Dimitri] Christakis, who’s in the film, he’s a pioneer in this stuff, he’s saying how dangerous it is with kids zero to five. And one of the problems is that to do a study you need years and you need to get funding. We still need time to do proper studies. And to see how much time kids are spending online, we can’t get that information. Facebook and Instagram have that information, but they won’t share it with medical doctors. What they are doing is sharing it with other companies like Amazon so they can sell you things though. That’s why we support the CAMRA Act with Congressman Raskin which will open up studies.

What kind of feedback have you gotten so far from screenings of the film?

We did a screening last week and I’m getting inundated with email from parents. We even had a teenager say, ‘You know what, I do feel like I’ve been duped’ and they took social media off their phone. I’m not sure how long that will last. It’s nice to hear. I think what parents like about it — I didn’t show up at Facebook’s office, kick open the door and make a stink. It’s not one of those documentaries where you are attacking people. I think people can digest it maybe because we’re nice. We’re Canadians and we’re just too nice. Obviously, we go against [Facebook CEO Mark] Zuckerberg at some points in the film, but we feel it wasn’t overwhelming and pushy. People are saying this film resonates with them.

Do you think being on screens can qualify as an addiction?

People will say, ‘It’s not an addiction.’ [Common Sense Media CEO] Jim Steyer says it’s a behavioral addiction. The WHO now classifies gaming as a behavioral addiction, and I think it’s only a matter of time before they add social media. If you don’t think you have a problem, why can’t you walk away from your phone? Why can’t you put it down for three hours and turn it off? One of the worst parts of this addiction is that it isn’t a drug. It is something behavioral.