After actress Halle Bailey was cast in the starring role of Disney’s live-action remake of The Little Mermaid, many were left to wonder just who exactly the up-and-coming star is, with some critics stirring controversy by inquiring why a black actress was chosen for the role rather than someone who matched the Ariel of the 1989 cartoon. Some social media users opposing the casting choice even began using the hashtag #NotMyAriel to express their displeasure with the news.

However hashtags didn’t match reality in this case as, most Americans backed the casting of Bailey as Ariel in the Little Mermaid remake, a new Hollywood Reporter/Morning Consult poll finds (The poll of 2,200 adults was conducted from July 8-10).

In contrast, only 17 percent replied that they “oppose” Bailey taking on the leading role. Though 34 percent of respondents “strongly support” the casting decision, roughly 21 percent said that they “somewhat support” it. As for the contrary, 8 percent of respondents “somewhat oppose” and 9 percent “strongly oppose” Bailey taking on the role of Ariel. 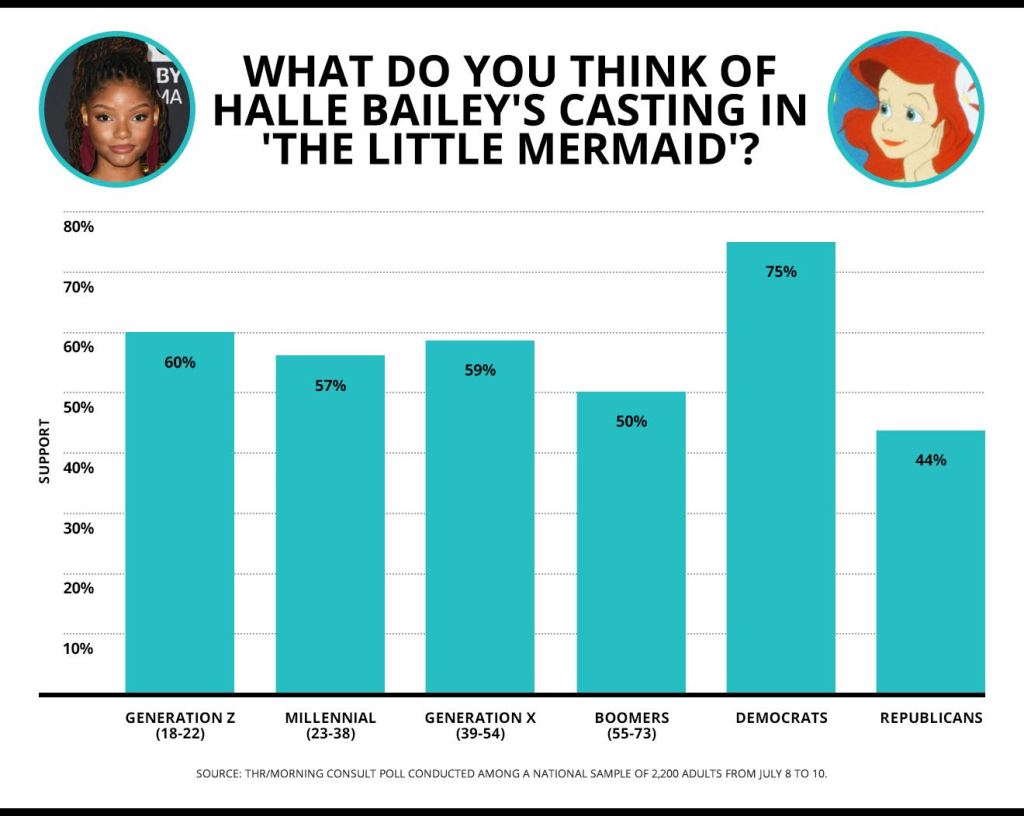 Meanwhile, 23 percent stated that they had “no opinion” or were unsure of what they thought of the actress being chosen. The stats show a 31 point gap by a political party — with 75 percent of self-described Democrats supporting the casting as opposed to 44 percent of Republicans.

Much of the controversy surrounding the casting is due to Bailey’s race not matching that of Ariel, who is known as a White, red-headed female character. According to the poll, over 48 percent of respondents stated that the closest description to their perspective on remakes is “when films are remade, they should be remade as close to their original as possible, including sticking to the race and ethnicity of each character.” Nonetheless, 25 percent of respondents were more in favor of remakes “trying to be more diverse in their casting.”

About half of the public (48 percent) surveyed in the poll supports racial and ethnic minorities replacing traditionally white characters — including 62 percent of Democrats and only 36 percent of Republicans. Meanwhile, 12 percent “somewhat oppose” and 9 percent “strongly oppose” actors of racial and ethnic minorities playing white characters. Approximately 31 percent of respondents had “no opinion.”

The 19-year-old singer-actress and Atlanta native may seem like a newcomer to Hollywood, but Bailey has already made a name for herself with a slew of successful works in film, television and music. Bailey’s varied acting roles over the years include a series regular role on Grown-ish as Sky Forster, Disney Channel’s Austin & Ally, Tyler Perry’s House of Payne and in the 2006 Queen Latifah film Last Holiday. She and her sister also form the duo, Chloe x Halle, signed to Beyoncé’s label Parkwood Entertainment.

For the upcoming live-action Mermaid remake, Bailey will be joined by stars Melissa McCarthy, Jacob Tremblay and Awkwafina, who have been in talks to lend their voices to other live-action and CG parts. Rob Marshall is set to direct, after helming the studio’s sequel to Mary Poppins, Mary Poppins Returns.

The film is eyeing an early 2020 production start.