The deaths of George Floyd, Ahmaud Arbery and Breonna Taylor, as well as ensuing protests nationwide, have prompted many in Hollywood to do some soul-searching about how they can fight police brutality and improve representation in their industry.

This unusual reflectiveness comes at time when young and diverse aspirants are finding it harder than ever to break into entertainment: Customary talent pipelines into the industry have contracted amid COVID-19’s economic fallout, including temp jobs, internships and below-the-line work, leaving many out of work or underemployed. But one important driver of inclusion in the industry is still persevering despite its dependence on production: directors’ workshops.

Programs such as the AFI Directing Workshop for Women, the Sundance Institute and Film Independent labs, the HBOAccess Directing Fellowship, NBC’s director programs, the CBS Directing Initiative, the Walt Disney Television Directing Program, the Sony Pictures Television Diverse Directors Program, ViewFinder: the Viacom Emerging Directors Program, the Warner Bros. Director Workshop and others have long linked aspiring, under-the-radar and indie helmers with networking events, professional mentors, production support, educational opportunities and funding. With alumni including Ana Lily Amirpour (Girl Walks Home Alone at Night), Justin Simien (Dear White People), Chloé Zhao (The Rider) and Lesli Linka Glatter (Homeland), directors’ workshops often serve as the proverbial foot in the door for underrepresented storytellers. They are also typically hands-on experiences focused on the art of production and leading a set — an endeavor that has been particularly hazardous in the first half of 2020.

However, the AFI’s DWW, Film Independent labs, the HBOAccess Directing Fellowship, ViewFinder: the Viacom Emerging Directors Program, the CBS Directing Initiative, the Walt Disney Television Directing Program, the Sony Pictures Television Diverse Directors Program and NBC directing programs are all moving forward in new forms amid the pandemic, The Hollywood Reporter has learned, with some creative solutions. (Warner Bros. is still evaluating its plans for its Director Workshop; others have not responded for comment.) As budgets tighten industrywide and production remains at a standstill, organizers have shared with THR the inventive and sometimes frustrating stopgap measures they’ve come up with to keep their programs going: “We’re not going anywhere and we’re undaunted,” Tessa Blake, AFI’s Nancy Malone Director of Inclusion Initiatives, says. “We’re seeing this as a call to action, to be part of the remaking of the new world post-pandemic.”

When the cancellation of the South by Southwest festival signaled to her that the HBOAccess Directing Fellowship would have to change in 2020, Kelly Edwards, WarnerMedia Entertainment’s senior vp talent development, felt relatively lucky. “We actually have the luxury of moving some pieces around in our program,” Edwards says. The fellowship, which selects diverse directors for mentorship, shadowing and the production of a pilot that airs on HBO channels and streaming services, takes place biennially and lasts around two years. As a result, organizers are planning to complete all aspects of the program that can be done remotely — its workshop and mentorship components — in 2020. The rest, like production on fellows’ pilots and director shadowing on HBO episodes, will likely be saved for 2021.

Though participants won’t have a typical schedule this year, there are a few perks to the new arrangement. In a normal year, the workshop kicks off with field trips and an intensive filmmaking workshop, Monday through Friday, that lasts seven hours per day, a schedule that is grueling for all involved. This year’s five-day workshop will be broken up into shorter, three-hour classes; students will then will attend a two-hour “master class” each month until directors can go into production. HBO is also delaying selecting three fellows from the 10 fellowship finalists to produce pilots with the company until the second year of the program. In the meantime, all 10 finalists are participating in the first year of the program and receiving its $5,000 stipend. “We’ll get to know a lot of people over a longer amount of time, we’ll be able to advocate for them, we’ll be able to get them representation if they don’t have representation,” Edwards adds.

The American Film Institute’s long-running Directing Workshop for Women had completed three major components of its program — workshops focused on orientation, fundraising and script development — when the novel coronavirus interrupted the rest. All in one week in mid-March, the pandemic prompted organizers to cancel their showcase of films helmed by the previous year’s participants and to move a production workshop that weekend online. The DWW program — dedicated to mentoring women and nonbinary directors as they produce a short film — usually sees directors attend daily classes at AFI in May and go into preproduction in June, but “the production piece of it … has really been upended,” says Blake.

In the meantime, May classes have been brought online and in-demand filmmakers who have more time on their hands than usual have video chatted with participants. Currently, organizers say that they do not have a set date when they will return to production and plan on following county, state and industry protocols. “We can’t do production right now, but what we can do is work on some skills and tools that will make us better directors — working on the craft of writing, the craft of editing, the craft of storyboarding,” Rebecca Murga, the director of the DWW, says. AFI will still open up admissions for next year’s workshop in the late summer. 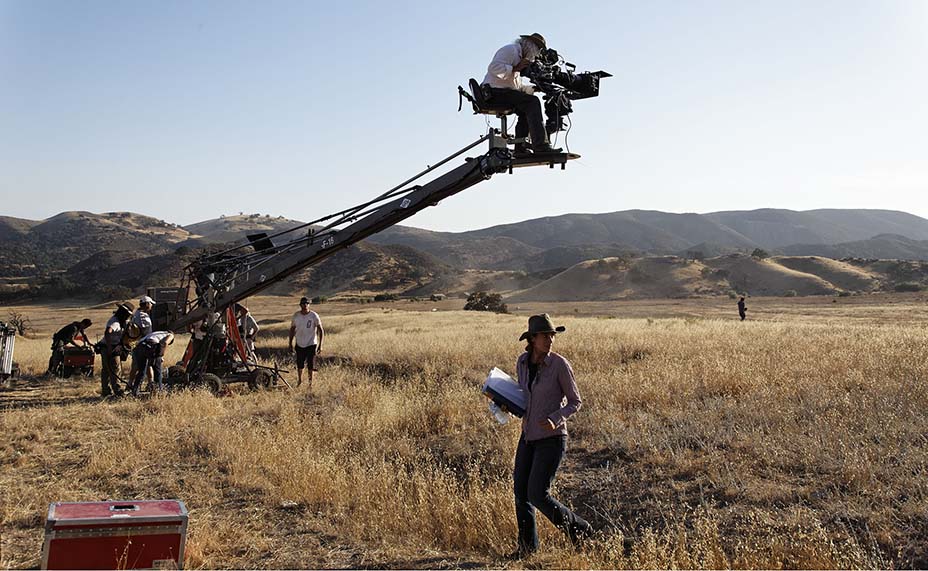 Multiple programs at Film Independent were stymied by local and state lockdowns as the pandemic spread nationwide earlier this year. The organization’s Documentary Lab and Project Involve programs, already in progress, had to shift quickly to remote programming, while the Directing Lab, which ran from May 4-15, also went virtual. Directing Lab participants, who normally receive script feedback and workshop scenes with an acting coach, are getting script feedback online and will workshop with actors when it’s safe to gather in person. Documentary Lab filmmakers, who enter the program when their films are in postproduction and receive guidance on the editing, distribution and marketing process, can also work on their films remotely. “In one sense, they have this really special time where they get to focus on the creative process, but at the same time, there’s so much uncertainty about where they’ll be able to take their films” in terms of film festivals and distributors, says Film Independent’s director of artist development, Lisa Hasko.

Project Involve participants are more directly affected by the industry’s production shutdown: The program, which connects underrepresented filmmakers with industry mentors and guides them through the production of a short film, had to postpone all production. In the meantime, Film Independent is coming up with a set of program-specific health guidelines for when production restarts. “The shoots will be much smaller; we’re curtailing scripts that had certain scenes that have too much intimacy or closeness, so people could stay far apart during the acting,” Hasko says; productions may also have a “sanitation supervisor,” akin to a script supervisor role. Film Independent’s Episodic Lab, which kicks off in August and typically sees participants shadowing writers rooms, may additionally be adjusted based on health guidelines and studio partners. “It’s really up to the studios, when it comes down to it, whether we’ll be able to go back to that [shadowing] model,” Hasko says.

At NBC, the network’s latest Emerging Director and Female Forward programs had just concluded by the time the coronavirus crisis began disrupting the production landscape, an insider tells The Hollywood Reporter (upcoming programs are moving ahead as usual). Helmers in the Alternative Director Program, which tasks aspiring nonfiction directors with working on and shadowing NBC shows in multiple formats, however, paused their set-heavy curriculum (participation will resume when production returns).

The CBS Directing Initiative, for its part, has organized several virtual events while production is on pause, including one-on-one meetings for participants with alumni of the program, a showrunner and producer roundtable and introductions with agents, managers and executives; the 2019 program has also been extended until the end of 2020. Viacom’s Viewfinder program has similarly arranged one-on-one meetings for participants with executives, made virtual introductions and extended its 2019-20 program until the end of the year, while additionally asking participants to pitch and develop ideas for shortform digital platforms and working with the 2018-19 class on networking opportunities.

Returning to set may be further complicated for production-heavy programs by a rush on equipment, studio space and other resources when paused projects are again given the greenlight. (Some workshops already produce during television’s off-season to make use of empty spaces and extra equipment.) “After all the other shows reboot, we’ll probably end up coming in when we can,” HBO’s Edwards says. Adds AFI’s Murga, “What I tell my filmmakers is you can only concern yourself with what you can control.”

Another concern at the top of organizers’ minds is how the economic fallout associated with the coronavirus has affected their program participants. When the crisis started, Film Independent sent out a survey to fellows to see how the economic consequences had affected their livelihoods. “Out of that, we saw a real need for financial support for fellows because artists have been really heavily impacted,” Film Independent’s Hasko says. As a result, the organization launched the Filmmaker Emergency Support Fund specifically to provide fellows with small grants of $500 through $5,000 to cover basic needs. Murga and Blake, for their part, say that when production resumes, they will keep production schedules flexible — and perhaps extend them into 2021 — because filmmakers normally have to take off work to produce their films.

For program participants that are in postproduction or have finished their films, this year’s dearth of in-person festival opportunities also complicates the usual process of marketing and gaining distribution for their films. Hasko says she and colleagues at Film Independent are asking themselves, “How can we, as an industry and especially as nonprofit organizations, advocate for filmmakers in that space and make sure they’re not getting a raw deal trying to get their film out into the world?”

Despite this year’s unique challenges, workshop organizers are adamant that the production element of the workshops will move forward when and where it can. “It is unacceptable for us [that] the outcome of the pandemic would be a contraction that limits the access of diverse voices,” Murga says. Edwards notes that the HBOAccess program has a “high success rate” of getting directors hired on projects, adding, “People forget that without the doors being opened through these kinds of programs, a lot of these folks would not necessarily get the same kind of access and connective tissue.”

Stephanie Allain on How Hollywood Can Fight Racism: "If You Do Nothing, You're Not Part of the Solution"