We crave answers. It’s an inherent part of our human nature. In the still of the night, when we should be sleeping, our minds struggle to grab hold of evidence in the dark, something, anything, to quell our biggest questions about life, death, eternity and endings. Director Mike Flanagan has made a career out of these questions and potential answers, using the horror genre as a sounding board. His latest feature, Doctor Sleep, adapted from the novel by Stephen King, is both a sequel to King’s celebrated novel, The Shining, and Stanley Kubrick’s iconic 1980 adaptation of the latter. While paying respects to two titans of storytelling, Flanagan manages to create a film that feels true to his specific lens and continues the themes explored in his previous pics. As a meditation on death, grief and how we handle each, Flanagan provides the kind of nourishment for the mind and soul that only the very best horror can achieve. Given that Doctor Sleep is Flanagan’s biggest-budgeted film to date and features his most star-studded cast, it would be easy to suggest the pic is the endpoint of the first phase of his career. Instead, it’s a continuing conversation, with room for the filmmakers’s exploration of these subjects to go on, and maybe even the story of The Shining as well. As the characters in the movie repeatedly refrain, “The world is a hungry place.”

Flanagan previously explored the impact of addiction, grief and childhood trauma on adults in Absentia (2011), Oculus (2013), Hush (2016), Before I Wake (2016), Ouija: Origin of Evil (2016), Gerald’s Game (2017) and The Haunting of Hill House (2018). While each of these films feel distinct and colored by their own unique characters, they all serve as expressions of a larger consideration about how the things passed down to us — possessions, homes, sickness, disabilities, faith and family — shape us and hurt us. The director has explored the best and worst parts of each and how they ultimately affect these characters’ survival and their understanding of life and death in terms of their personal place within them. 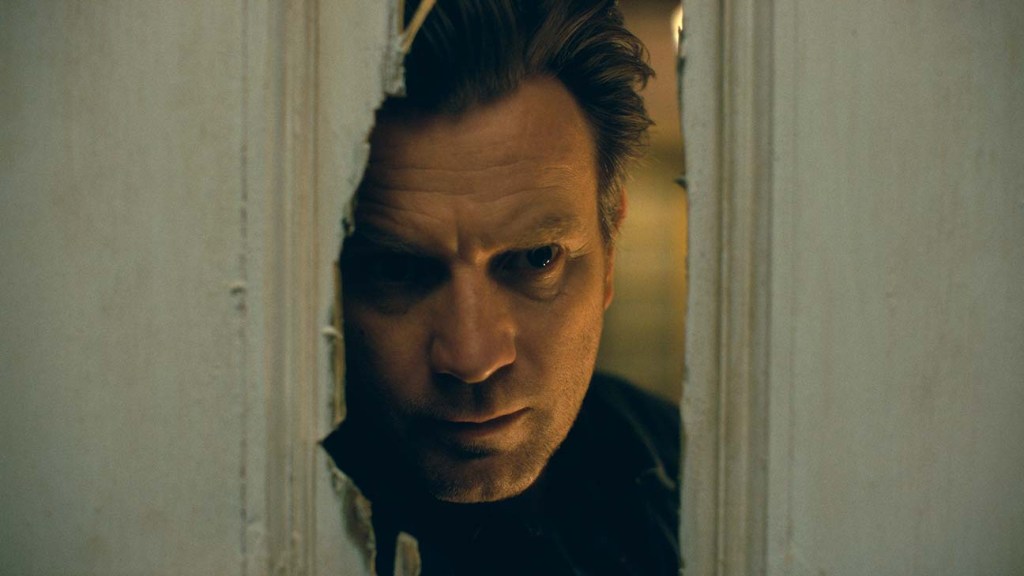 Childhood trauma looms large in Doctor Sleep, which opens in 1980 shortly after the events of The Shining. Danny Torrance (Roger Dale Floyd) communes with the ghost of Dick Halloran (Carl Lumbly), seeking a way to put the events of The Overlook Hotel behind him, even though the literal ghosts have followed him home. Halloran suggests creating a space in his mind, like The Overlook’s hedge maze, where he can box up these evil spirits and lock them away. It’s a more visually intriguing look at the suppression of childhood trauma, but it’s suppression all the same, meaning that eventually the ghosts of the past will have to be dealt with again, because the dead are never truly dead. This is both a blessing and a curse. The ghost that looms largest is, of course, Jack Torrance, Danny’s father, who was portrayed so memorably by Jack Nicholson in Kubrick’s film. Even though Jack isn’t seen until the pic’s end, where he is portrayed by Henry Thomas, his presence haunts the movie, both in terms of Danny’s arc and the expectation of what a Shining sequel entails.

As an adult, Dan (Ewan McGregor) finds his grief manifesting in the urge to both run away from his father and the attempt to connect with his spirit. He struggles with the question of how he can both bury his dad and resurrect him. His first answer comes in chasing his father’s death by following the downward spiral of his dad’s life. Jack’s ghost has metaphorically possessed Dan in the form of inner rage and alcoholism. Dan has been charged not only with the legacy of shining but the legacy of his father, which at times seem incompatible by their very nature, particularly since alcoholism dulls his shine — all play and no work makes Dan a dull boy. McGregor incorporates little touches of Nicholson’s performance into his own, and though never venturing into the territory of impersonation, they become more pronounced within Dan when the character is sober. It’s important to note that despite certain visual cues and an ending that harkens back to King’s original novel, Dan is a different character from Jack. And while those unfamiliar with either book may expect or even want a retread of Kubrick’s film, Doctor Sleep has different ambitions that allow the pic to feel like a natural extension of King’s works and Kubrick’s take.

When Dan seeks help and recovery, aided by his sponsor Billy (Cliff Curtis), he finds new purpose for his life, utilizing his shine and own experiences with death to help hospice patients ease away from life. He also gains a new nickname, Doctor Sleep, an extension of his childhood one, “Doc.” For Dan, death is a natural step on the way to something else. “Everyone’s dying. The whole Earth is just a hospice with fresh air,” he says. And yet, Dan’s preconceived notions about life and death are from a safe distance and don’t rely on him confronting the fates of his parents or the ghosts he’s locked away in his mind — at least not immediately.

Dan’s journey is mirrored by a thematic foil, Rose the Hat (Rebecca Ferguson), a vampire who feeds off of the psychic energy those with the shining possess, alongside her tribe, the True Knot. She and her True Knot have lived for centuries on the steam of other psychics whom they torture and kill, gaining longevity through the fear and pain of others. But as the world’s shining few dwindle, subdued by modern medicines and technology that interfere with their brain waves, the True Knot grows desperate and fearful of their own deaths. Where Dan fears connection and truly living, Rose fears loneliness and dying. Her commitment to staving off her death, and those of her followers, has become something of an addiction that parallels Dan’s alcoholism and is equally destructive. 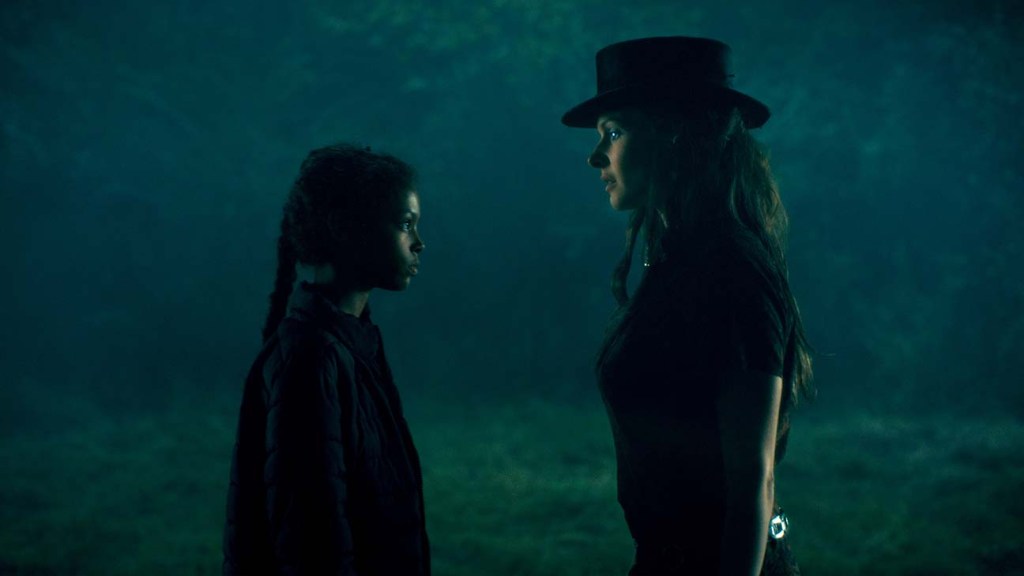 Dan and Rose find their illusions of life and death shattered by Abra Stone (Kyliegh Curran), a teenager with a powerful ability to shine who Rose sets her sights on. When Dan responds to Abra’s request for help once she becomes aware of the True Knot’s existence, he is forced to deal with ramifications of life and death outside of the confines of hospice care. He knows death is not the end, and yet the state of the living and the dead takes on new meaning when it involves those he cares about. It finds him forced to confront the fate of his parents and seek out new answers about how to understand how they live on. Similarly, Rose must face Dan and Abra after her True Knot has been killed off, and she must confront death alone and without the knowledge of an afterlife — the very thing that Dan as Doctor Sleep has provided for his patients. There is no existential pondering in the face of her loss, only rage. 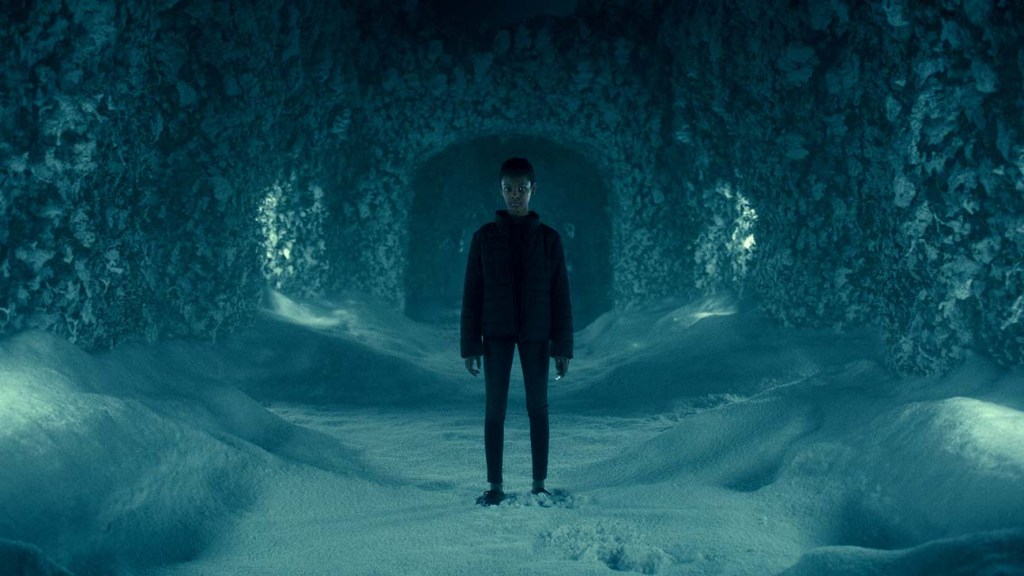 Abra experiences her own share of trauma before her final battle against Rose, notably the death of her father. Dan has indirectly and unintentionally passed down his own experiences to the next generation, and the result both haunts Abra and ensures her survival. During the climax in the boarded-up Overlook, Dan frees the ghosts from his mind and sets them loose. We see two grieving parties pit against each other, one side knowing that life is only a step in existence and the other fearing the uncertainty of that next step because she has become so transfixed by the seeming certainty of her life. These are nighttime questions in the dark, the faith in an afterlife and the dread of a void, pit against each other within the bones of a haunted hotel.

Doctor Sleep ends with answers to those questions, with Dan sacrificing himself to save Abra and spare her more trauma, in the way his father couldn’t do for him in Kubrick’s movie but does in King’s novel. And by appearing to Abra as a ghost, Dan grants her the knowledge of the afterlife to console her mother over the death of her husband. But like anything passed down, bad comes with the good. Dan has not only passed down his knowledge of the shining, his gift to commune with the dead, but the curse of it as well. “The world is a hungry place,” he reminds Abra when she asks if there are others like the True Knot out there. The final scene shows Abra confronting the ghost of Room 237, suggesting that she will find her own way to overcome trauma, her own boxes for the ghosts now in her possession, and the answers to new questions that will emerge because of them.