As far as film trajectories go, Donnie Darko followed one of the strangest. Then again, nothing is conventional about the story of a troubled teen trying to make sense of a mysterious man in a rabbit costume offering Doomsday prophecies.

In October 1998, the film’s director, Richard Kelly, wrote the script during a feverish 28-day stretch, banging out the existential beats of the story’s 28-day arc. Not long after, he signed with CAA at the age of 23 and was hailed Hollywood’s new boy genius.

Fast forward three years, and the Jake Gyllenhaal-led Donnie Darko was set to debut theatrically on Oct. 26, 2001. But with Americans still reeling from the Sept. 11 attacks just six weeks earlier, the film’s Doomsday themes became a box-office deterrent. After all, one of the film’s opening scenes features a jet engine crashing into Donnie’s bedroom. Not surprisingly, the film’s international release stalled for almost a year. The total box office was a meager $1.3 million.

There was one line in the script that Coppola highlighted. It was one of Drew Barrymore’s lines, that I think still is in the director’s cut of the film, where she says, “The kids have to figure it all out these days, because the parents, they don’t have a clue.” It’s when her character has been fired for teaching Watership Down — her final scene with Jake Gyllenhaal. So he circled that line of the dialogue in my script. He slid the binder down the big table and very dramatically said. “That line of dialogue, that’s what your whole movie’s about right there.” So I think he was kind of looking at me and I was barely 24 years old, and I think he was looking at me as being at the very beginning of my career, and he probably saw potential and he wanted to make sure that I didn’t screw it up. And I think he wanted me to understand that I had my whole career ahead of me, and that there was something in the script about a new generation. The first line in the script is, “I’m voting for Dukakis,” and it’s delivered by Maggie Gyllenhaal. It’s a liberal teenager confronting conservative parents and the very end of the Regan era. it’s almost like this new generation that was rejecting the war on drugs or Regan policies. And this new liberal generation was going to have to defy the older one. I think he was latching on to that and seeing me being kind of an incarnation of these teenagers. And I was Donnie basically, and I was writing this sort of rebellious piece about confronting authority. This was the year 2000, and it was seen as being a pretty provocative piece of writing at the time. We were still in the shadow of the Columbine massacre, 9/11 hadn’t happened yet, Tipper Gore was trying to get Marilyn Manson records banned.

It’s so crazy to think now because the world we’re living in now, our innocence is just so far in the rearview mirror. When we brought the movie to Sundance [in 2001], everyone passed for a multitude of reasons, but one of the biggest ones was Columbine. People were not comfortable with any movie that showed a teenager holding or firing a gun. They thought the movie was potentially going to be promoting suicide or something. There were a lot of people who backed out of the room completely after they screened the movie and were like, ‘We don’t want anything to do with this.” There were people who loved it, but it was just impossible to market. We couldn’t get arrested after Sundance, and it was the success of Memento at Newmarket that helped us get distribution. Aaron Ryder, who was the producer of Memento, screened [Donnie Darko], and he very strategically invited [Memento director] Christopher Nolan to the Newmarket buyers’ screening. And Christopher raved about the movie to the Newmarket guys and gave them the confidence to buy it and agree to a tiny theatrical release. It was a situation where sometimes you can benefit from the success of someone else’s film. And we were lucky that no one wanted to buy Memento, even though it had won the screenwriting award that year at Sundance. Everyone said, ‘It’s too cerebral. No one’s gonna be able to figure this movie out.’ And Newmarket was just like, “Hell, we’re just gonna distribute it by ourselves.” They hired Bob Berney and they made $25 million, and it was a game-changer because it was kind of a conservative time. 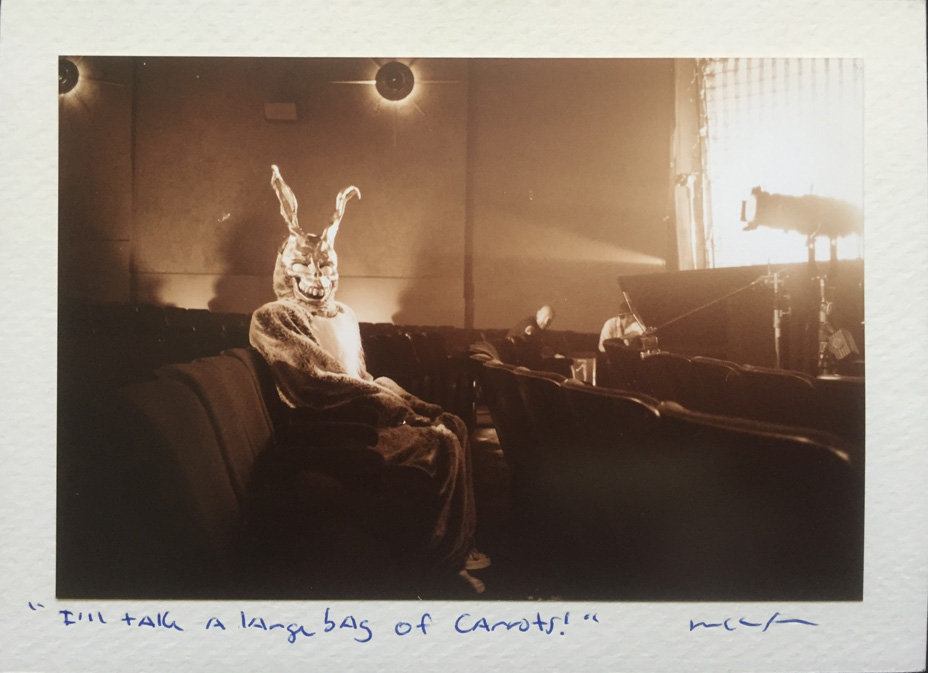 We were just finishing with the Clinton administration and we were phasing in Bush. I think there’s something about when we have a liberal administration, Hollywood becomes complacent. But then all of the sudden the administration changes, and the pendulum swings back. We now have Trump in office. I hope people are willing to take more risks now, and that we need to take risks, right? And we need to resist, and we need to create resistance art. An administration change can really rattle us out of our complacency and push us into a more aggressive political state with our art.

I remember writing Donnie Darko back in October 1998. That’s part of the reason why it’s set at Halloween. It’s like I was looking back a decade or so in my life, Donnie’s a little older than I would’ve been in 1988, but I was basically writing a nostalgia fantasy about my adolescence. And l was living in Hermosa Beach with a bunch of friends from college in this disgusting house, and I was working as a client assistant at a postproduction house in Hollywood, serving cappuccinos and making cheese and cracker plates for Madonna and Puff Daddy and Jennifer Lopez, who were doing postproduction on their music videos. And I wrote Donnie Darko in that fevered monthlong period in 1998.