Costume designer Jennifer Johnson remembers following the headlines about figure skaters Tonya Harding and Nancy Kerrigan in the ‘90s and being “gripped by the drama that was unfolding in the Lillehammer Olympics,” she tells The Hollywood Reporter. “I felt like the whole country was obsessed with the trials and tribulations of an amazing athlete. I never imagined I would work on a film about Tonya Harding, somebody I thought I knew so much about and I actually didn’t know anything about.”

“To this day, she’s still one of the best skaters of all time and I think that the strength of her as a female skater was really swept under the ice, so to speak, and that we all lost sight of how incredible she was as an athlete,” adds Johnson, who was tasked with re-creating Harding’s iconic ice-skating costumes.

Where did you begin with your research given that the ice-skating costumes were based on real-life events?

We were doing unusual research like looking at clips on YouTube that friends, family and news organizations had uploaded over the years and of varying quality.[…] One thing that we found on eBay, there was an obsessed fan that had an archive of tabloid clippings and we purchased that. That was one of the most enlightening pieces of research that I discovered because it had a lot of family photos in it, too.

Tell me about the pink ice-skating costume that Margot Robbie sews herself at one point.

In that scene, she breaks up with her coach, Diane, who was a very wealthy woman and part of Portland society and really tried to groom Tonya to fit into the skating world. When she broke free from her, Tonya started asserting herself, which was around the same time she met Jeff. She broke away from her mom and didn’t have anyone guiding her; she was doing her own thing. That costume is one of her performance costumes that we took a bit of license with. There’s a photo of her from that time period in a similar costume and then we kind of embellished it. 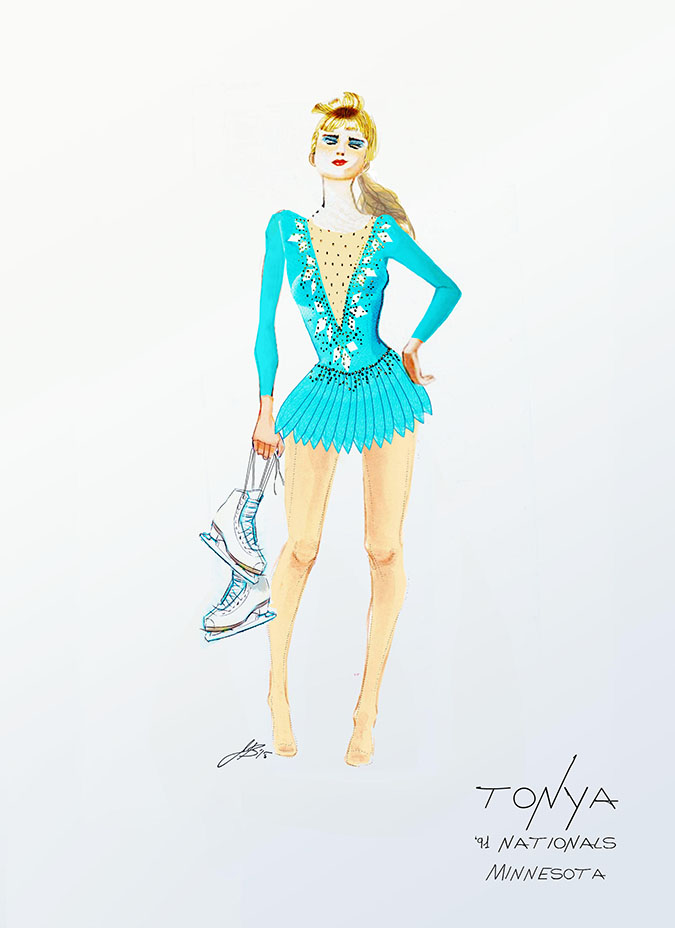 Then there’s the turquoise costume from the 1991 Nationals in Minneapolis.

That’s a fun costume because it was her first big event — that’s when she lands the triple axel and that’s a defining moment for her. That costume would have either been made by her or her mother. The fit of it is really important because the Spandex at the time did not stretch in the same way. It’s sort of baggy along the arms, which is done intentionally. It’s not perfect, but it’s quite well made when you look at photos of the original. It doesn’t have the sleekness that maybe some of the other skaters had. The leaves on the skirt were lined with silver so that when she spun, you could sense a bit of rock ‘n’ roll.

How about the maroon costume at the end for the 1994 Winter Olympics at Lillehammer, Norway?

At this point, she has sponsorship and money. That costume is really well made when you look at images of that event. There’s real expertise and tailoring going on.

Out of all the costumes you had to design, which one would you say was the most difficult to re-create?

I would say showing the progression with her weight [gain] was probably the most challenging, and then outside of her skate costumes, the most challenging was to show clothing in her civilian/non-athletic life from the late ‘80s/early ‘90s that were totally irony free and not funny. That was a really big focus for me. I hope you’re not distracted by shoulder pads and acid wash and all the tropes that you look at that define that era as being bad fashion.

An interesting thing that happens between Jeff and Tonya that I noticed in my research as she pulls away from Diane and LaVona, and the abuse becomes more and more intense, is that they start dressing alike. It’s like Stockholm syndrome and you really see it in photos; they’re both in turtlenecks, matching sweaters. They become one person almost. This is something I’ve never heard anyone talk about, it’s something I noticed the more I did research.

Speaking of non-skating costumes, there is the fur bomber that Margot wears in the film when she’s meeting with Jeff. Was that an upgrade from the fur coat that her dad is seen making out of rabbits he hunted himself when she was a little girl?

We found that [bomber] on eBay. We didn’t want to use fur, but we really needed to, so we wanted to use something that was old and that didn’t have to be resourced as new as far as materials were concerned. She loved her dad so much and it is sort of a remembrance of her holding onto him a little bit. It also shows that at that time, she was being trained by Diane and Diane was buying things for her. It’s also a little trashy in a way because that coat isn’t as gorgeous as something that Diane would have worn. I think it symbolizes her trying to assert her own identity, but still [maintain] her connection with her dad and her resistance to being this society girl that Diane wants her to be.

How Margot Robbie Nailed Her Landing for 'I, Tonya'

Locksmith Animation Reteams With DNEG on 'That Christmas'