The film follows Lloyd Christmas (Jim Carrey) and Harry Dunne (Jeff Daniels) as they embark on a journey from Rhode Island to Aspen, via Harry’s Mutt Cutts van — aka the dog-shaped vehicle he used for his job as a pet groomer before he got fired.

As a limo driver, Lloyd takes Mary Swanson (Lauren Holly) to the airport and immediately falls in love with her. When she leaves behind her briefcase, Lloyd takes it and convinces Harry to drive cross-country with him to return it to her, hoping that she’ll fall in love with him as a result. But unbeknownst to them, the briefcase was filled with ransom money for her husband’s kidnappers and now two criminals are after Harry and Lloyd.

Dumb and Dumber was written and directed by the Farrelly brothers, Bobby and Peter, who also helmed Me, Myself & Irene, Shallow Hal and There’s Something About Mary.

Carrey and Daniels reprised their roles in the 2014 sequel, Dumb and Dumber To.

In honor of Dumb and Dumber‘s 25th anniversary, The Hollywood Reporter takes a look at what these stars have done since the New Line film hit theaters.

By the end of 1994, most people probably knew the name Jim Carrey, after he starred in two other comedy hits that year: The Mask and Ace Ventura: Pet Detective, with the second film also spawning a sequel. Since Carrey’s Lloyd traveled across the country by Mutt Cutts van, he’s brought many other characters to life with his lead roles in Liar Liar, The Truman Show, Man on the Moon, Me, Myself & Irene, Bruce Almighty, Eternal Sunshine of the Spotless Mind and Yes Man. He also played the Grinch in How the Grinch Stole Christmas, Count Olaf in Lemony Snicket’s A Series of Unfortunate Events, Horton in Horton Hears a Who! and Scrooge in A Christmas Carol.

Carrey currently stars in Kidding, Showtime’s series that follows iconic children’s television character Jeff Pickles as he deals with the hardships in his own life. Up next, Carrey will appear as Dr. Ico “Eggman” Robotnik in Sonic the Hedgehog, the live-action adaptation of the Sega video game, currently in postproduction. 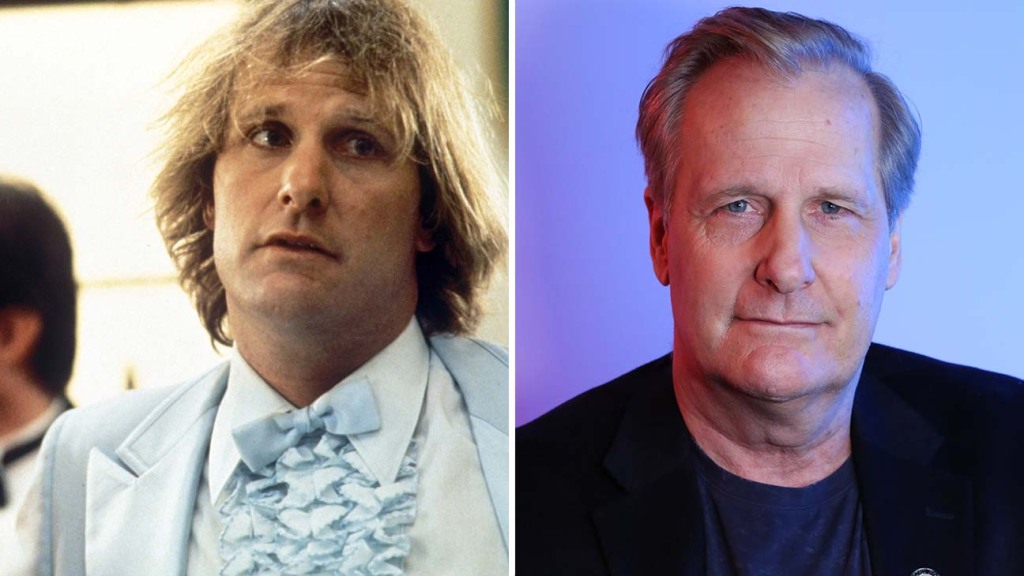 Jeff Daniels played Lloyd’s best friend Harry. After Harry is fired from his dog-grooming job, Lloyd convinces him to drive them to Aspen to give Mary Swanson back her briefcase. Earlier that year, Daniels starred in Speed and has gone on to star in numerous films and TV shows — the live-action remake of 101 Dalmatians, Fly Away Home, Pleasantville, Gods and Generals, The Squid and the Whale, Because of Winn Dixie, RV, Looper, Steve Jobs, The Martian and The Divergent Series: Allegiant. Daniels also wrote and starred in Escanaba in da Moonlight, Super Sucker and Guest Artist. From 2012 to 2014, he portrayed news anchor Will McAvoy in HBO’s The Newsroom, for which he received a Golden Globe nomination and a Primetime Emmy win. Currently in preproduction, Daniels will take on the role of James Comey in the miniseries adapted from the former FBI director’s book, A Higher Loyalty: Truth, Lies and Leadership. 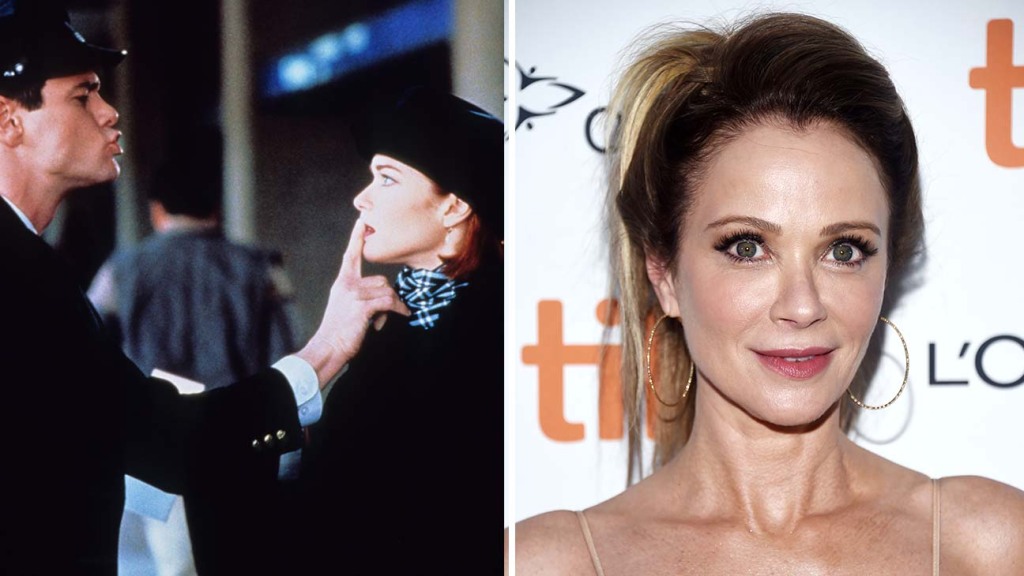 Mary Swanson just wanted to pay her husband’s ransom and move on with her life, but Lloyd and Harry had other plans. After dropping a briefcase full of money at the airport for her husband’s kidnappers, Mary heads for Aspen, hoping that it won’t be long before she gets her husband Bobby (Brad Lockerman) back. Lauren Holly’s portrayed numerous characters since 1994, starring in films like Sabrina, Down Periscope, Beautiful Girls, No Looking Back, What Women Want, Changing Hearts, Down and Derby, The Final Storm, The Blackcoat’s Daughter and Tammy’s Always Dying. She’s had recurring roles on series NCIS, Motive and Designated Survivor.

Mike Starr played Joe “Mental” Mentalino in Dumb and Dumber, one of Mary’s husband’s kidnappers, who follows Lloyd home after he picks up the money-filled briefcase at the airport. He eventually dies when Lloyd accidentally gives him rat poison pills that Joe was going to use to kill Lloyd and Harry. Starr is a busy man. In 1994 alone, he was in 11 different movies and TV series. Since then, he’s taken on roles in Clockers, Blood and Wine, Hoodlum, Summer of Sam, Jersey Girl, The Ice Harvest, Black Dynamite and Bad Santa 2. He’s had recurring stints on Joan of Arcadia, Days of Our Lives, The Young and the Restless, The Mob Doctor, Chicago Fire and Mr. Mercedes.

J.P. Shay is Mentalino’s partner in crime, literally. She helps him kidnap Bobby and retrieve the briefcase. After Mentalino dies, J.P. takes the lead on the ransom mission. In 1994, Karen Duffy also starred in Disney’s Blank Check, where she portrayed an FBI agent, and Reality Bites. She can be seen in films like Meet Wally Sparks, The 24 Hour Woman, Celebrity, Marmalade and the TV series Pepper Ann, and she voiced Linda Otter in Fantastic Mr. Fox. The year after Dumb and Dumber was released, Duffy was diagnosed with neurosarcoidosis, a rare incurable disease that attacks the central nervous system. She wrote about her experience with the disease in her two novels, Model Patient: My Life As an Incurable Wise-Ass (2000) and Backbone: Living with Chronic Pain without Turning into One (2017).

Harry and Lloyd meet Beth at a gas station on their way to Colorado. She tells them she’s on her way to Aspen to get away from her boyfriend, but they learn toward the end of the movie that she is actually an undercover FBI agent. Rowell starred in Barb Wire, A Wake in Providence, A Perfect Fit, Home of the Brave, Of Boys and Men and Marry Me for Christmas. Rowell was a long-running character on TV series Diagnosis Murder and The Young and the Restless, the latter of which earned her 11 NAACP Image Awards for outstanding actress in a daytime drama series and three Daytime Emmy nominations for outstanding supporting actress in a drama series. She also had recurring roles on Jacqueline and Jilly and The Rich & the Ruthless. Along with her work on the big and small screens, Rowell advocates for education, arts, foster and adoptive youth and diversity issues.

Joe and J.P. may have been the muscle behind the operation to kidnap Bobby and ransom him, but Charles Rocket’s Nicholas Andre was the brains. An old friend of the Swansons, he knew they had money and that Mary would pay whatever she needed to in order to get her husband back. After finding out Lloyd and Harry spent most of the money and replaced it with IOUs, he takes them hostage and almost kills them. Rocket had four more titles under his belt in 1994, followed by parts in films like Steal Big Steal Little, Tom and Huck, Murder at 1600, New Suit and Shade. He guest-starred on TV series The Pretender, Grace Under Fire, Star Trek: Voyager, The X-Files and The King of Queens, with recurring roles on The Home Court, Normal, Ohio and Touched by an Angel. Rocket voiced characters in The New Batman Adventures, Men in Black: The Series and Superman: The Animated Series. He died in 2005.

Known for her starring roles in Tootsie, Young Frankenstein and Close Encounters of the Third Kind, Teri Garr portrayed Helen Swanson, Mary’s stepmother, who plans for Harry and Mary to go skiing together. Garr’s acting career began 30 years before Dumb and Dumber‘s release and continued until she officially retired in 2011, though she had already been semi-retired since her diagnosis with multiple sclerosis in 1999. She had recurring roles in TV series Good Advice, Women of the House, Batman Beyond and Friends, where she played Phoebe Buffay’s birth mother. On the big screen post-Dumb and Dumber, Garr has acted in Michael, A Simple Wish, Kill the Man, Dick, A Taste of Jupiter and Kabluey, alongside her former onscreen daughter Lisa Kudrow.

Brady Bluhm took on the role of Billy, a blind little boy who uses a wheelchair and lives in Lloyd and Harry’s apartment building. Before they left for Aspen, Lloyd sells Harry’s decapitated parakeet to Billy, after taping its head back on. Later in the movie, Billy talks to a news anchor about how he just thought the bird was really quiet. Over the years, Bluhm has lent his voice to Christopher Robin in Winnie the Pooh videos, video games and a TV short. He acted in The Crazysitter, Alone in the Woods and The Last Man(s) on Earth. He also made appearances in Murphy Brown, Star Trek: Voyager and Clueless and reprised his role as Billy in Dumb and Dumber To.

Harry and Lloyd first meet Sea Bass at a diner on the side of the road when Harry throws a salt shaker over his right shoulder to avoid bad luck and accidentally hits Sea Bass in the head. He comes over and spits in Harry’s burger. To get revenge, Harry and Lloyd trick the waitress into thinking Sea Bass wants to pay for their check and they leave. Later, they run into Sea Bass again at a gas station. When he’s about to beat up Lloyd, Harry charges into the bathroom to put out the fire on his leg, due to spilling gas on himself, and unintentionally knocks Sea Bass out in the process. Cam Neely is a retired hockey player by trade but has done some acting. He’s in Me, Myself & Irene (alongside Carrey and plays Trooper Sea Bass), What’s the Worst That Could Happen? and Stuck on You. He also appears in a post-credit Dumb and Dumber To scene where he chases Lloyd and Harry after they accidentally throw their milkshakes on his truck window.

Harland Williams portrayed the Pennsylvania state trooper who pulls Harry and Lloyd over for speeding and accidentally drinks Lloyd’s urine from a beer bottle, thinking the men were drinking and driving. Since the movie, Williams’ career has taken off. He’s starred in RocketMan (1997), Half Baked, Superstar, Sorority Boys, Employee of the Month, The Dukes of Hazzard: The Beginning, My Life in Ruins and Fudgy Wudgy Fudge Face. He voiced characters in Ned’s Newt, Gary & Mike, Meet the Robinsons, The High Fructose Adventures of Annoying Orange, Robot and Monster, Jake and the Never Land Pirates, Sausage Party, Skylanders Academy, Puppy Dog Pals and The Addams Family. Williams played recurring characters in TV series like Simon, The Geena Davis Show and Package Deal.

The Stars of 'Ace Ventura: Pet Detective': Where Are They Now?