Eddie Redmayne, a 2015 Oscar winner for playing Stephen Hawking in The Theory of Everything, once again takes on the role of a historical figure in Netflix’s The Trial of the Chicago 7. As Tom Hayden, the late anti-war activist who was charged alongside six others for inciting riots during the 1968 Democratic National Convention in Chicago, Redmayne stands out in a star-studded cast that includes Sacha Baron Cohen, Mark Rylance, Yahya Abdul-Mateen II, Frank Langella and Michael Keaton — all while delivering dialogue written by Oscar-winning screenwriter Aaron Sorkin, who also directs. Redmayne spoke to The Hollywood Reporter about the camaraderie on set, the ways in which the film parallels America today and some words of wisdom from Hayden’s former wife Jane Fonda.

What were your first reactions to the script?

There was great anticipation when it arrived in my inbox because I am an admirer of Aaron’s work. I’m a slow reader, and it was one of the quickest things I’ve ever read. I had this extraordinary feeling of having just learned about a moment in history that I was pretty ignorant about. It felt almost like a piece of music — clashes of jazz, classical, punk and all in a quite extraordinary story about some quite extraordinary people. There was a lightness of touch to it that was perhaps the most revelatory thing. He made it feel so easy.

Were you familiar with the events depicted in the film before reading the script?

I wasn’t. I’d heard about Abbie Hoffman, but I wouldn’t have been able to place him. I knew little about the peace movement. I had actually just watched the great documentary [The Vietnam War from Ken Burns] and got some insight for the first time, properly, about the war. It was starting to work this job that was an education for me.

What kind of research did you do to learn more about Tom Hayden?

One of the wonderful things about the job we do is you get to immerse yourself in a moment in history, in stories that are extraordinary, and through that immersion, you learn a huge amount. In doing the homework, as it were, I read Tom’s work and found as much footage that I could of him. There were great courtroom sketches of Tom that gave a sense of his physicality — it was almost like seeing him, caught by another artist, revealed something else. But you do the homework, hoping to have it embedded in you, and then [you must] be able to throw it away and play opposite these other actors. Aaron was very open to all of us that this was his version of events. He described it as a painting, not a photograph. 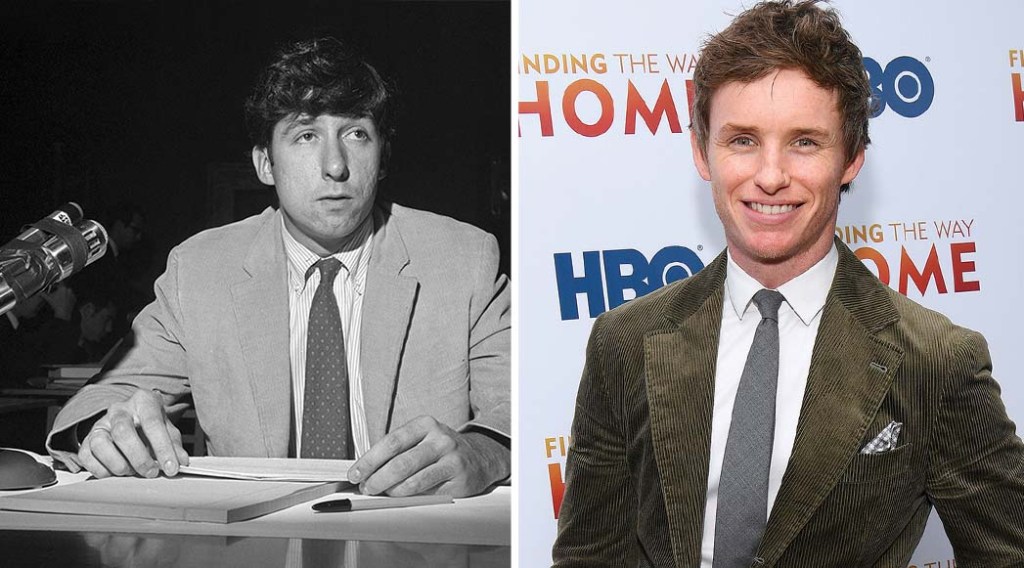 You’ve played a lot of real people. Is it a little easier than playing a fictional person?

It’s a different challenge, and each of those characters had different challenges. For example, The Theory of Everything was based on Jane Wilde, Stephen Hawking’s ex-wife. The Danish Girl was an adaptation of a book that itself was a fictionalized take. You’re already several steps away from the truth. You want to try to convey a sense of who you believe this person was. Tom is a player in this great ensemble, and it’s a tiny moment in his life.

Was there rehearsal for the actors to get comfortable with the script and one another?

I became attached two years ago, falling deeply in love with the film. And then when I was ready to move with my family [from London to Toronto] to shoot it, I suddenly found out that it had fallen apart. Then it was another six or eight months later [that we started shooting]. It was very quick. There wasn’t any time for rehearsal. We went straight into shooting the riots in Chicago and then straight into the court scenes. I wonder whether it was on purpose. The film is made of such an elastic band of characters, and Aaron had cast such an eclectic band of actors, many of whom had completely different processes. There was something chemical.

Speaking of that eclectic group of actors: You’re all playing characters representing different factions within the anti-war movement, plus some actors in more authoritarian roles. I’m trying to think of a good way to ask this …

If there was tension on set? (Laughs.)

Or maybe some partisan cliques? Not to make it sound like you’re in high school.

No, I love that. (Laughs.) There was a joyful vibe to this set. Lovely Frank Langella — we were told by Aaron before starting that he didn’t want to speak to us, he was going to have his own entrance on set. And I admired that. That was his process to play [the film’s] great antagonist [Judge Julius Hoffman]. I loved his commitment. And then the first day on set, he sat there, probably seeing this troupe of actors sitting around tables, sort of gossiping, and he got deeply jealous. (Laughs.) And then he came over to us, and we got to have a great Langella chat. I would love to tell you there was great tension that mirrored [our characters’], but there wasn’t.

I imagine it was almost impossible not to compare it to what was happening in the U.S. while you were filming.

When I read it years ago, it felt relevant. We finished this in November, the year before last. And literally from when we finished filming, it was uncanny and pretty disturbing to watch how the world began to mirror history. In 1968, you had Vietnam and the anti-war movement, but you also had the civil rights movement, the women’s rights movement. The following year, the Stonewall riots. The flu pandemic from ’68 to ’69. Nixon was running for election on law and order. The point is that human beings are cyclical creatures, and however many times we remind ourselves to look to our history, we will always keep making those mistakes.

I can’t even remember if it was scripted or something that Mark Rylance improvised. When Yahya, playing Bobby Seale, was bound and gagged, it was quite disturbing and a horrible thing to witness. Mark [portraying defense attorney William Kunstler] said, “Can you breathe?” And when I saw [the video of] George Floyd. … It was a horrible, horrible echo.

How do you feel as an English actor playing a role in this film about a dark moment in American history?

Great writing and extraordinary stories have a rhythm that is universal. And there were just so many elements of this film — even though they were very specific to American culture at a very specific moment — that remain universal. It’s been interesting watching this film being seen all over the world now on Netflix and seeing different cultures reacting to it and relating it to moments in their own history. At its core, it is a very human story and therefore relatable.

Even though they weren’t together during the time depicted in the film, have you heard from Jane Fonda about playing her ex-husband?

I haven’t. In preparation, I watched the documentary [Jane Fonda in Five Acts] with the riveting chapter on Tom. One very beautiful piece, which I would recommend anyone reading, is on Jane’s website, about how she, their son Troy Garrity and Tom’s widow Barbara Williams had come together to arrange his memorial. She describes how on the day before he died, he whispered to her that seeing people willing to die for their beliefs changed him forever. She also said how he understood that progressives had to be prepared to take power and learn to govern — not just protest. Those were two statements that I hung on the wall of my trailer.