Elizabeth Harvest isn’t quite a horror film, though that would have made it easier for writer-director Sebastian Gutierrez to get it made.

Gutierrez notes it was “extremely difficult to find financing” for the project, which stars model-turned-actress Abby Lee as Elizabeth Harvest, the young bride to the much older scientist Henry (Ciaran Hinds). The film also features Gutierrez’s longtime partner Carla Gugino and Matthew Beard as servants in Henry’s manor, where Elizabeth is told nothing is off limits, except for one room she must never enter. Not long into the film, there’s a revelation when she enters that room without permission: Elizabeth (Lee) is actually one of several clones Henry has created. The question then becomes, why?

It’s a revelation that in other movies might have come at the end, but that Gutierrez wanted to push up.

“When I first wrote the script several financiers said, ‘you could just make a horror movie out of this about this one thing,’ ” recalls Gutierrez. “I said, ‘I don’t want to stretch this thing out for an hour and a half. I’d be much more interested in getting into how we ended up in this situation.’ Because to me, the surface story is something that is very familiar so I didn’t want to just stay there.”

For more than a decade, Gutierrez had been kicking around the idea to riff on the classic folk tale Bluebeard, about a young woman who marries a man who has murdered his previous wives. When Alex Garland’s Ex Machina came out and proved a sci-fi movie taking place largely in one house could be successful, finding financing for Elizabeth Harvest suddenly became easier.

“When movies come out, they get reviewed and contextualized with everything that’s immediately around them, so we knew the Ex Machina comparisons would be inevitable,” the filmmaker says. “I love Ex Machina, and I’m very thankful to Ex Machina because it made it so money people could say, ‘Sure, we’ll give you the money to make it.'”

Elizabeth Harvest‘s leading lady Lee rose to prominence on the big screen in 2015’s Mad Max: Fury Road, in which she played The Dag, one of the wives of the villainous warlord Immortan Joe. In Elizabeth Harvest, she had the challenge of leading a film opposite more seasoned actors — and also playing multiple versions of the same character. But as Gutierrez notes, there is a tradition of models making the jump to lead genre films.

“If you have been a successful model, you have survived in an industry that is one of the few industries that are trickier for women than Hollywood,” says the filmmaker. “Abby has all of that life experience, which is really helpful for this character, which is a character who both has to be sort of alien-like and yet desirable and sort of has this conked-on-the-head quality. Her fight or flight instincts are going to kick in and she’s going to show she’s a survivor, so Abby was from the moment we sat down, really clear on how she would create subtle differences between the different versions of this person she was playing.”

There’s a haunting moment in the film in which Hinds’ Henry explains his motivations, a monologue that on a low-budget film like this required him to deliver it in just a few takes.

“I thought that character deserved not to remain as a monster, which another actor easily could have played him as, but as broken, like a child being very vulnerable and explaining something  in Ciaran’s hands is recognizably human,” says Gutierrez. 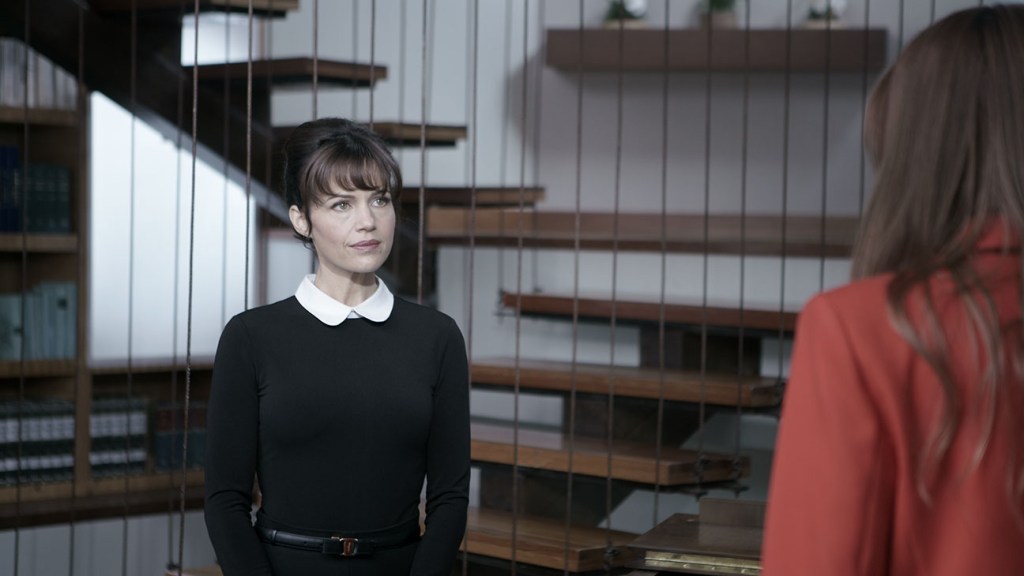 Gutierrez is also one of the credited screenwriters on 2006’s Snakes on a Plane, Samuel L. Jackson’s instant cult classic about a man just trying to get some snakes off a plane. It’s not the kind of film you might expect from the mind behind the moody and meticulously crafted Elizabeth Harvest, and Gutierrez notes at times having Snakes on a Plane on his résumé has led to people making assumptions about his interests.

“I write many different kinds of things. But when you are known as the person behind Snakes on a Plane, people do assume certain things. You’re like, ‘No no, there’s nothing wrong with Snakes on a Plane, it’s great. But we can also do these other things,'” he says.

Gutierrez also gives credit where credit is due.

“I’m not the brilliant mind that came up with the epiphany Snakes on a Plane. I’m the person who came and rewrote and helped that movie along to get made,” he notes of the story that originated from David Dalessandro. “I got a call from a producer who said, “We want to help you with this movie.” I said, ‘What is it called?’ and they said, ‘It’s called Snakes on a Plane.’ I said, ‘Great, what is it about?’ I thought maybe it was a poker term or some gangster thing I didn’t know. They said, ‘snakes on plane.'”

He notes that multiple times during the process, people involved in the movie got cold feet and doubted it should be called Snakes on a Plane, but Jackson put his foot down.

“Sam Jackson, from the get go, said, ‘I signed on to make a movie called Snakes on a Plane. There are snakes on a motherfucking plane and that’s the movie that we are making!’ “

Elizabeth Harvest is in theaters and VOD now.