Continue to The Hollywood Reporter SKIP AD
You will be redirected back to your article in seconds
Skip to main content
June 12, 2017 9:00am

Hair and makeup departments made stunning moves this year, from reconstructing two very different-looking actors — Geoffrey Rush and Johnny Flynn — into two iterations of Albert Einstein to reshaping the iconic Jessica Lange into an icon from another era, Joan Crawford. Not to be outdone, team Fargo‘s handiwork buffed and polished Ewan McGregor into two very different-looking brothers.

Perhaps no makeovers drew as much attention as the transformations of Alec Baldwin (into Donald Trump) and Melissa McCarthy (into Sean Spicer) during Saturday Night Live‘s unforgettable 42nd season on NBC. So uncanny was Baldwin’s Trump that in February, Dominican Republic newspaper El Nacional mistakenly published a photo of the star in costume, instead of an actual photo of the president, to accompany a news story. “Alec showed me that and we were laughing, we couldn’t believe it,” says SNL hairstylist Jodi Mancuso.

The work for Mancuso and makeup artist Louis Zakarian started with researching Trump’s look. “We found every picture from every angle,” she says.

“The trick was creating that orange [skin tone] and the light around his eyes, topped off with a crazy pair of eyebrows,” says Zakarian. “In our first meeting with Alec about this look, he wanted to go all out and extreme. I think the first time I did that makeup, the eyebrows and orange skin were really over the top. After that, I toned things down a bit.”

“[Baldwin and Trump] don’t have the same size forehead,” adds Mancuso. “We originally considered a bald cap, but we didn’t want to make the process so long for him. On show day, we paste down his hair, spray it and put the wig on top of his hair. It takes about 50 hours to build a wig; each hair is sewn in.”

An added challenge is that the work is for live TV, so Baldwin has to make his metamorphosis fast. “If it’s a cold open, we have a little more time. But it could take [as little as] a few minutes,” Mancuso says, adding, “He doesn’t sit still; he’s getting into character, always working on last-minute script changes.”

To become White House Press Secretary “Spicey,” McCarthy wore a partial bald cap — to recede her hairline — that extended from her forehead to just behind her ears; the wig went over that. “We didn’t have time to build the wig — we found out about the character maybe two days before air — so I pulled something I had from stock,” says Mancuso. “We put in the different colors and shape of the style.” 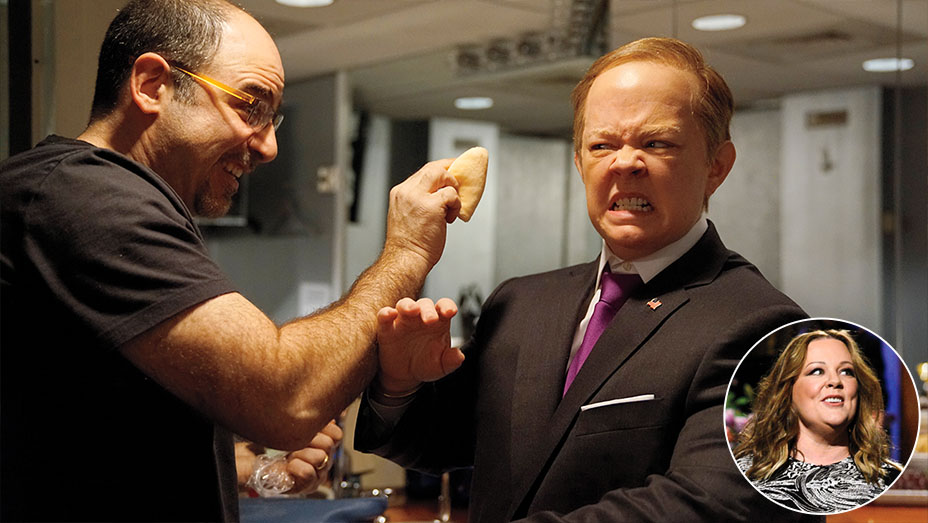 Zakarian also gave McCarthy “a pair of silicone eye bags, pushed her ears out to make them look a lot bigger and added some highlight and shadow to build some more character,” he says. “Before we ended, Melissa and I both decided to try a little pair of eyebrows to really round out the makeup.”

“It’s so much fun to create characters for comedians when they don’t care about looking silly,” Mancuso says.

For FX’s Feud, Lange had to portray Crawford during the course of a story that spanned several decades. “We started in the early 1940s and worked through the filming of Whatever Happened to Baby Jane?, the Oscars, through to the late ‘70s,” says hair department head Chris Clark, noting that there was plenty of photographic and movie imagery for reference so that he and his team could create Crawford’s precise looks. “We had at least a dozen wigs — real-life ones and looks from Joan’s famous pictures and films. Joan had a very polished sense of herself. Even at home, there was a polish, elegance and an eye toward her outward appearance.” 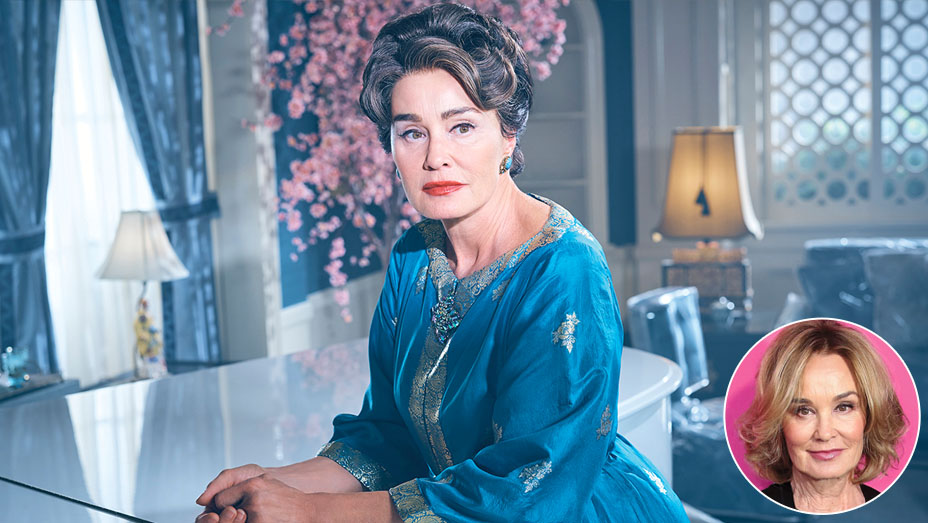 “We used a little CG for the texture of the skin,” adds makeup designer Eryn Krueger Mekash, “but it was 90 percent done with makeup — highlights and shadow, no prosthetics. We gave her the Joan Crawford eyebrows, the overdrawn lip. We used traditional techniques used in the 1960s and made color choices more on the warm side, often coral colors. When Joan’s a little older, we used less makeup and less foundation when she’s at home.”

For the National Geographic Channel’s Genius, about the life of Albert Einstein, makeup, hair and prosthetics designer Davina Lamont went back in time to bring the famed physicist — played in his younger years by Flynn and later by Rush — to the small screen. “Einstein is known for his wild hair and mustache,” Lamont says. “It was in all the reference pictures I pulled, so throughout the series I had to make sure the references were up to date with how wild the hair was at different times. It was fantastic that Geoffrey has some of the same facial aspects as Einstein. Einstein also had amazing upper eyelid droops, so we added small prosthetic pieces to Johnny’s face and pushed it a little with Geoffrey’s makeup.” 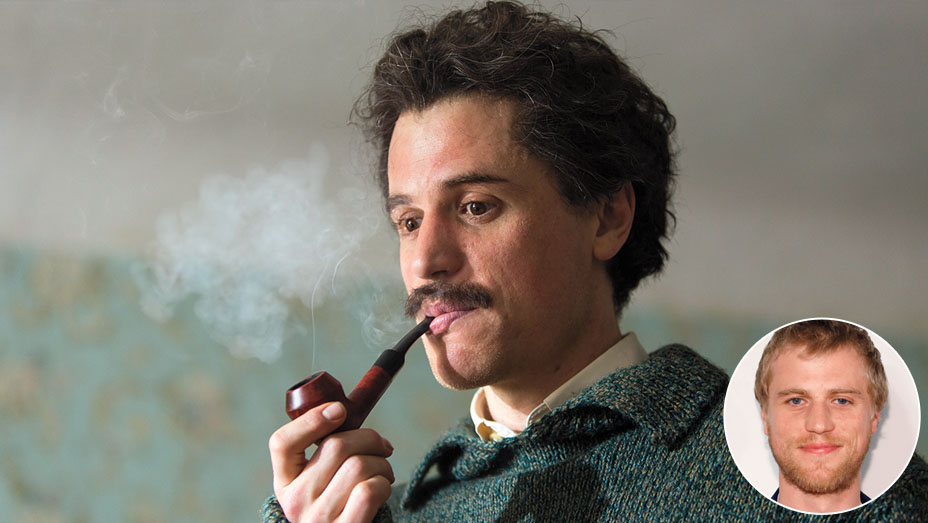 As both actors’ versions of Einstein aged, Lamont added more prosthetics, aging wigs and mustaches to stay aligned with the reference pictures. “Johnny was a bit harder, as he looked like a blond-hair, blue-eyed surfer,” she says. “We had to dye his hair darker and curl his hair every day for his 16-year-old look. As he aged, we added curly toupees and slightly gray, wilder wigs. Both Johnny and Geoffrey have blue eyes, so I had to make sure they had brown contact lenses. And because we went from age 16 up to Einstein’s death at age 76, I ended up with nine different variations of aged wigs for both Johnny and Geoffrey, and close to 30 mustaches.” 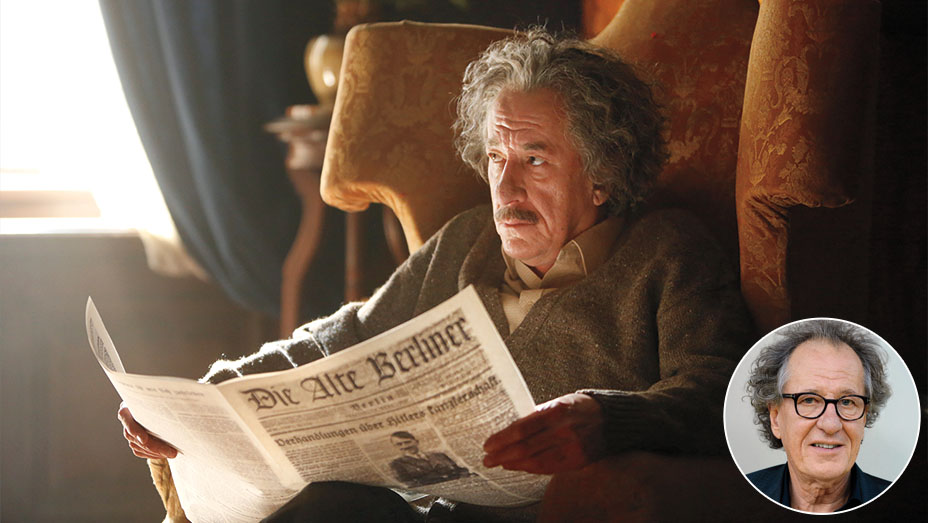 In the fictional world of Noah Hawley’s anthology series Fargo, this season centers on dueling Midwestern brothers, both played by McGregor. The hair and makeup departments had to help the Scottish actor transform amid the time constraints of a schedule that sometimes involved him playing both characters on the same day.

“Emmit Stussy is the put-together brother; he has a sporty, healthy, refined look,” says hair department head Chris Glimsdale. “We gave him dark, curly, lush hair. Ray is the guy who was always trying to be cool that never came out of high school. He has blond, thinner hair and he’s balding.” According to Glimsdale, McGregor agreed to shave his head to help with the character switches. 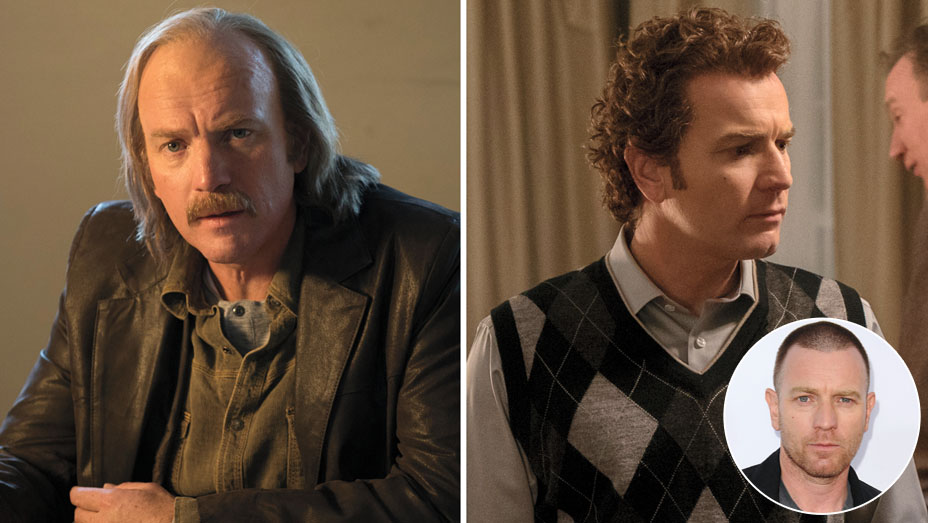 “For Ray, we used prosthetics to widen the nose, take away the natural cleft in [McGregor’s] chin, and added a little weight to his face under the chin,” says makeup department head Gail Kennedy. “We used highlights and shadows to take away angularity and add texture. Emmit is a richer character, so we made his features more angular and accentuated the cleft in his chin. He’s tan and more well-kept.”

The parallel approaches were somewhat driven by the versatile star’s busy shooting schedule. “Ewan could change from Ray to Emmit in about an hour and a half. The other way was about two and a half hours. It was amazing to watch.”

Ewan McGregor on Challenge of Playing a Double Role in 'Fargo'