Star power is something that has grown increasingly short in supply. Not celebrity — we have plenty of that; but true star power, the ability to sell a film based on name alone, is a scarcity in modern Hollywood action movies where the names of characters, Bond, John Wick, Spider-Man, and familiar IP, Marvel, DC, Star Wars, are often worth more than the name of an actor. Stallone. Schwarzenegger. Willis. Cruise. Denzel. Smith. The ’90s were a haven for marquee names, and the right star was enough of a deviation to turn even the most familiar plot into a box office hit. The quality that makes a star hasn’t changed, but the attention of audiences has. Films that would have topped the box office charts two decades ago are now relegated to financial disappointments, and actors playing the superheroes in the most popular franchises struggle to translate that fan interest to other projects in the theatrical market. But that may be changing in the age of streaming as old-fashioned star power becomes a new currency.

Friday saw the release of Netflix’s latest original film, Extraction, starring Chris Hemsworth. Produced by the Russo Bros., scripted by Joe Russo, based on his graphic novel Ciudad (2014), and directed by first-time filmmaker, Sam Hargrave, Extraction boasts plenty of Marvel connections. The Russos, of course, are best known for directing Captain America: The Winter Solider (2014), Captain America: Civil War (2016), Avengers: Infinity War (2018) and, the highest-grossing movie of all time, Avengers: Endgame (2019), Hargrave served as stunt coordinator for the most recent three films, was the second unit director on Infinity War and Endgame, and doubled Chris Evans in The Winter Soldier and The Avengers (2012). Hemsworth, as everyone surely knows, is best known as the mighty Thor. And while he’s yet to appear in a Russos-directed Marvel film, David Harbour, who has a small but memorable role in Extraction, will play a supporting role in Black Widow later this year. With all of those Marvel stats, and the clout the Russos have built up over the last few years, it’s understandable for audiences to wonder, Why Netflix?

Extraction comes from the Russos’ production company AGBO, and is its second feature following last fall’s 21 Bridges (2019), starring Chadwick Boseman. So far, the Russos have primarily used the film side of AGBO as a chance to develop non-superhero stories with a troupe of MCU actors. With the exception of the upcoming Sundance horror hit, Relic, also produced by Jake Gyllenhaal, AGBO has placed its development attention on mid-budget action thrillers, a source of lifeblood for theatrical experiences before the superhero boom of the 2000s. The production company’s next film, Cherry, also directed by the Russo Brothers, stars Tom Holland as a bank robber with an opioid addiction. AGBO also has a remake of The Thomas Crown Affair on the docket, and it wouldn’t come as a surprise to see a Marvel star at the front of that film as well. There is an interest at the production company, it would seem, in finding a new way to take these superhero actors who possess the kind of star power that would have made them bigger than any one character in the ’90s, and pair them with old-school premises, all for a reasonable price.

Extraction revels in the kind of old-school action of the ’90s, boasting crazy stunts and a surplus of gunplay. While the plot is reminiscent of Man on Fire (1987) and (2004), and Hargrave’s direction is sure to draw fair comparisons to the John Wick franchise, Extraction is even simpler than that. It eschews world building of the Keanu Reeves franchise for the kind of pure action movie spectacle that those raised on the films of Stallone and Schwarzenegger might expect. But Hemsworth is different from the leading men of old, and even while placed within a story that feels like a throwback, his performance is uniquely modern in terms of our expectations of the action lead. Hemsworth’s mercenary, Tyler Rake, isn’t entirely unlike characters we’ve seen before, men with military backgrounds and tragic pasts who are forced to serve as both protector and caretaker. But whereas so many of these types of characters begin as emotionally detached at best, and assholes at worst, Rake is likable without trying to come across as so. There’s an inherent charisma to the character, and his relationship with 14-year-old Ovi (Rudhraksh Jaiswal), while not close initially, isn’t without some sense of kinship, manifested in Rake’s early referral to him as “mate” and his consideration of him as more than a package but a person. What’s interesting about Hemsworth’s performance here is that the role of Tyler Rake is not so different from the kind of roles he was offered at the start of his career. Yet, his filmography has given him the tools to transform his inherent good looks and stoicism into something more compelling and worthy of the star power he now possesses. 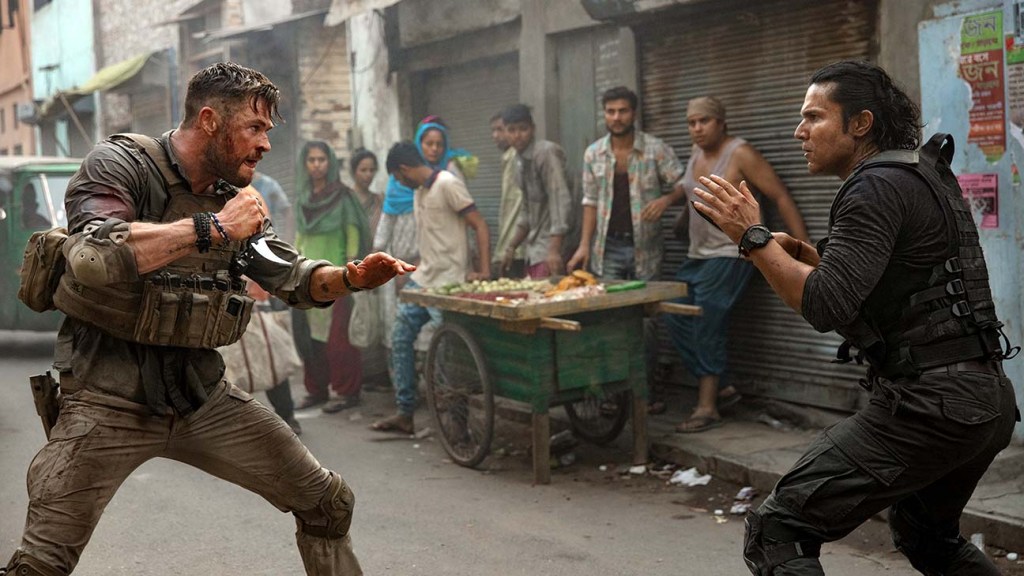 It’s easy to imagine seeing Extraction in theaters, as the film certainly looks theatrical, and features action and set pieces that would look incredible on a big screen. But the film stands to get more eyes on it on Netflix than it would in the theatrical marketplace, and this would have been true before the COVID-19 pandemic. Boasting a strong performance from Boseman, 21 Bridges, a weaker film than Extraction, made $50 million on a $33 million budget. Not a big loss for STXFilms, but it’s a prime example of a film that would have undoubtedly found a larger audience and served Boseman’s star power better on Netflix. As we see cinemas become increasingly event-driven, with audiences more willing to shell out for ticket prices only for the biggest films, it becomes harder for actors to attract general audiences for anything beyond the superheroes they play. Just because everyone turned out to see Boseman as Black Panther, doesn’t mean that they’ll do the same to see him play an NYC cop. But with streaming services, and nonevent level expectations that come with those releases, actors have a better chance to see their star power utilized in the same way those marquee names of the ’90s did. While “let’s watch the new Thor” is far more likely to be heard than “let’s watch the new Hemsworth” at cinemas, the latter statement is far more likely when considering the age of streaming.

Hemsworth is the perfect example through which to consider the wane of traditional star power and its newfound potential. Before landing the career-changing role of Thor in Kenneth Branagh’s 2011 film, Hemsworth’s filmography consisted of a brief role as George Kirk in Star Trek (2009), and small supporting roles in horror movies A Perfect Getaway (2009) and The Cabin in the Woods (2011), which showed early range but didn’t necessarily suggest a leading man. Thor and The Avengers, gave him weightier material, including a powerful scene that saw him face off against Anthony Hopkins, but the takeaway from those performances resulted mostly in roles that did little to set him apart from Hollywood’s then-current crop of blond leading men. Red Dawn (2012) and Snow White and the Huntsman (2012) were the most immediate signs that Hemsworth’s portrayal of a superhero didn’t automatically result in a box office following. Snow White was a box office success, but as the sequel, The Huntsman: Winter’s War, eventually proved, the success of the first had more to do with an attachment to the fairy tale, and a great trailer, than any real interest in Hemsworth as a YA romance styled sword and sorcery hero.

The most important step in Hemsworth’s post-Thor career was playing James Hunt in Ron Howard’s Rush (2013). Not entirely a 180 from Thor, Hemsworth’s charm and swagger, fully on display here, also manifested something deeper, a steely-eyed focus that suggested not only a grand inner monologue but a stormy emotionality. There’s a sense of drive in Hemsworth’s performance as Hunt, a conscious desire to cover up a formidable and dangerous feeling of inferiority. Further performances in Michael Mann’s Blackhat (2015) and Howard’s In the Heart of the Sea (2015), neither critical or box office darlings, showcased the potential of an actor who never seemed quite comfortable in the role of jock or eye candy. In terms of the latter, Hemsworth managed to push against this type of casting and poke fun at himself by entering the realm of comedy, first with Vacation (2015), and then with Ghostbusters (2016). Again, neither film was a critical or box office success, despite Hemsworth being genuinely funny, but they sharpened the tools that took him to his next venture, and allowed him to bring more of himself and comedy to Thor by the time he reached the third entry, Thor: Ragnarok (2017), which revitalized his interest in the role. 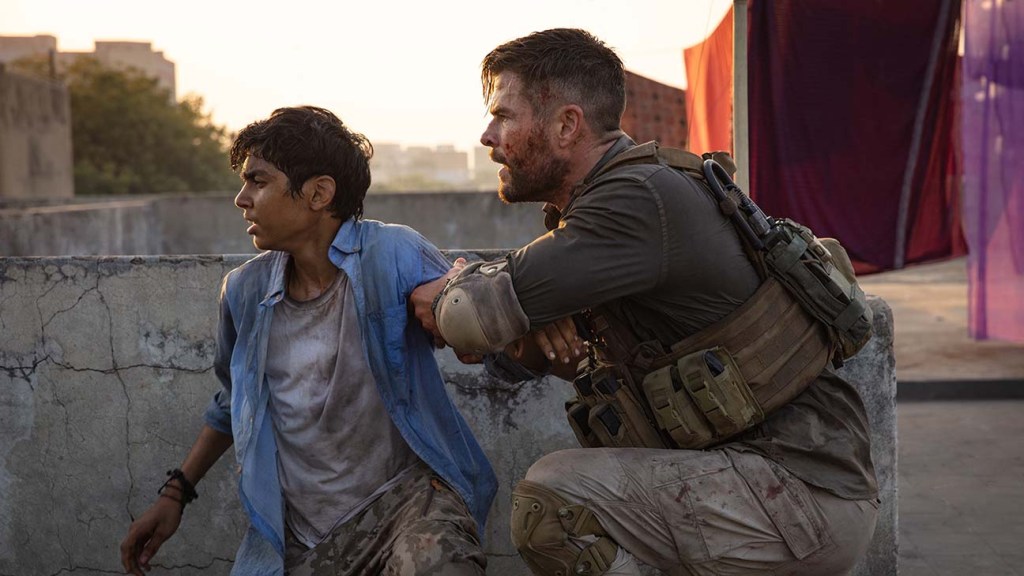 Hemsworth tapped into his dark side as a charismatic cult leader, Billy Lee, in the criminally underseen Bad Times at the El Royale (2019), arguably his best performance, and channeled Roger Moore in Men in Black: International. What’s interesting about his career is that despite very little box office success outside of his role as Thor, Hemsworth shows the most consistent evolution as a performer of his Avengers co-stars. There’s never a sense that he’s simply settled into the comfort of being an actor known for one type of role, even if he does find himself appearing in some genres more frequently than others. There’s a quality to Hemsworth that makes him comparable to fellow Aussie Mel Gibson, before his directorial fame with Braveheart (1995), and the controversies that have marred the latter part of his career. There’s a quality the two actors share, not only because they both found their fame in franchises, Thor and Mad Max, but because they also managed to deliver engaging, genre-crossing performances in films that weren’t box office sensations but showed a consistent development of craft. Most important, Hemsworth, like Gibson, is an action hero whose tears are believable. It may seem like a small thing, but there’s a vulnerability to Hemsworth that allows him to come across as genuine and personable, an essential quality when so much of action films are built around artifice and grandeur. His ability to convincingly play the vulnerable hero made him the MVP of Infinity War, and it’s what allows for the investment in Extraction. Tyler Rake is a role Hemsworth could have been cast in immediately after Thor, but he wouldn’t be nearly as effective as he is in it without the decade of refinement.

Star power will likely never translate into box office receipts the way it used to, but that doesn’t mean the concept is gone. It seems likely that it will simply translate into a new format. While Netflix is typically hush hush on how its features perform, it wouldn’t be a surprise to see the streaming service champion the film as one of its biggest hits, especially with households craving new content while under quarantine. Turning star power into streaming service currency seems like a realistic outcome not only for AGBO, which has yet to finalize a distributor for Cherry, but for a number of studios still looking to keep mid-budget films alive, and agents who still bet on the power of a name. Extraction isn’t the first of Netflix’s big-budget releases, which include Six Underground (2019) and Bright (2017), but it is arguably the best, and the best argument for selling films based on names. Chris Hemsworth may not get his name on theater marquees for opening days, but his name is certainly going to populate a lot of Netflix queues over the weekend.