[This story contains spoilers for F9.]

When filmmaker Justin Lin decided to come back to the Fast franchise, it was not only an opportunity to work with old friends, it was a chance to provide Justice for Han (Sung Kang).

Lin revealed in his 2013 film Fast Six that the fan-favorite character, whose death was originally depicted in The Fast and the Furious: Tokyo Drift (2006), died at the hands of villain Deckard Shaw (Jason Statham). Lin then departed the franchise, but further installments shifted Shaw into a more heroic light, even seeing the character get his own spinoff, Hobbs & Shaw. For many fans, the notion that the bad guy responsible for Han’s death was now one of the good guys didn’t sit right, leading #JusticeForHan to be a rallying cry.

Michelle Rodriguez on Why 'Fast X' is "French 'Fast & Furious'"

Justin Lin to Direct 'One Punch Man' for Sony

F9 not only revealed that Han’s death had been faked, but its post-credits scene also gave fans the reunion they’d been waiting for when Han comes come face-to-face with Deckard Shaw once again.

“A lot of people assume when Han comes back in 9, that’s Justice for Han. I never felt like that’s the case,” Lin tells The Hollywood Reporter. “The issue with Justice for Han is not, ‘Hey, he’s gone, we want him back.’ It was that something was not right and we need to figure out how to correct that.”

Lin has two more Fast and Furious movies in the works, and he teases that post-credits scene sets the stage for much more Han.

“The most critical element of this is the treatment of this character. So Justice for Han, really, is how we treat Han as he comes back and as we move forward,” says Lin. “There is definitely a lot to explore and to unpack and that is just a moment I wanted to share with the audience — that there’s a lot more to come.”

Over the weekend, F9 roared to $70 million at the North American box office, the largest opening of the pandemic era.  In a conversation with THR, Lin also delves into casting John Cena as a long-lost Toretto brother, and how he’s approaching the next two Fast installments as the conclusion to a trilogy.

How much is location scouting involved in your writing process?

A lot. As soon as I commit to it I’m jumping on a plane and flying around the world just to find inspiration. This one was no different. Very early on as we were writing the script, (co-writer) Dan Casey and I and (producer) Clayton Townsend, we jumped on a plane. It’s one of those phases that I love. It could be anything you want it to be.  At the same time, we are flying around the world to hopefully find partners that can help us realize some of the stuff that was in our head but now we need to really find specific worlds for it.

When you write an Avengers movie for Marvel, you get a board with all the actors’ faces and whether they have deals for the movie or if that would be negotiated. Is there an equivalent for you? Were Dwayne Johnson and Jason Statham on the board for you?

It’s interesting. On this one, I never feel like I had to go in a board room and feel like I had to negotiate this or that. It just felt very organic. My process has always been the same. It doesn’t matter if they are onscreen, these characters are still alive in our universe. It’s been a process that I’ve done every film. Always check in with them. Many times I’ll give the Tokyo Drift boys a shout out because I literally would track them a little bit through time and in this chapter they get to come and be onscreen. My process was never, “I need this, I need that.” It just felt like it was organic in what we were trying to explore. It felt like everything fell into place. 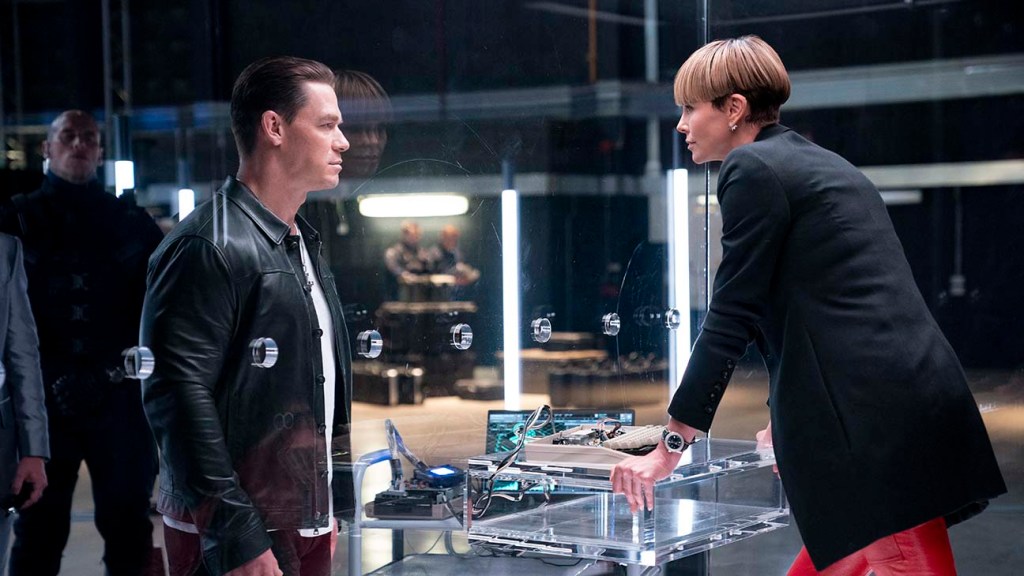 When you write a Fast movie you have the luxury of being able to think of a Vin Diesel or a Michelle Rodriguez as these characters. So how do you go about writing a brother for someone as iconic as Diesel’s Dom when you don’t have the actor in your mind?

The idea is what drove me back, and then the thought of casting was really scary to me. The first meeting I had was with John, within 30 seconds I felt like he’s our guy. The fact that he was so humble, hard-working. He actually had siblings. So as we were talking I could see he could lock into this. And the fact that he’s fearless and can try anything, I felt like we were very fortunate. Usually, you are taking meetings. It takes months. This one was easy. It was one of the rare moments where we kind of found that match really early on.

Part of your job is to make these characters look as cool as possible onscreen. Do you ever get someone saying, “Oh man, I want to look as cool as Dom in this shot”? How do you balance who gets to be the coolest person in any particular scene?

(Laughs.) I don’t know. Maybe it’s because of our process. I’ve heard things. I’ve heard stories. But I think when I’m a part of it, that’s never been part of our equation. Our conversations a lot of times is about the journey for this character, but at the same time, especially with Vin, I spent most of the time talking about Dom and things with Dom that’s not even happening onscreen. That’s how we develop this process. We have enough trust now, especially on this one when I came back, we were just so happy to be together, that there was none of that for me to deal with.

How do you know when you have the perfect Vin Diesel take, and when it’s time to move on? Does he tell you? Do you tell him?

We definitely have a shorthand. What I love about Vin as a partner is that we do our prep, we have our process of really talking through everything. So when he’s on set, he’s the actor and there’s enough trust that we can make the adjustment and we don’t go until I feel like we have it. That’s something that I always feel is important on any set. We can’t just wrap the day and move on. We’ve got to keep pushing each other.

You are conceiving of 9, 10 and 11 as trilogy to wrap up the main franchise. Does that mean 10 is going to be darker, like Empire Strikes Back?

A lot of 9 is about introducing new characters, bringing back old characters, and in a way recalibrating and setting everything up to be going in the right direction as we are heading into the final two. We’ve been talking about it for almost ten years now. And I’ve always thought that it was just an exercise. I never thought we were going to do it for real. So the fact that when I came back Vin pulled me aside and said, “We’re doing it. We’re going to end this thing,” — I feel great. It’s not like, “We have to react and do something.” This is something we’ve been talking about throughout. We have to take care to make sure that’s fully supported.

How much are you coordinating this out with Fast franchise scribe Chris Morgan and other Fast stakeholders? There’s a lot in play, with a potential female spinoff, and maybe more Hobbs & Shaw in this universe.

There are definitely a lot of gatekeepers in this universe. What I found out in 9 was my biggest challenge was trying to find enough real estate, because I love all the characters, and now all these characters have such backstories. I feel like I actually had four scripts. There was a Han script that could be its own movie, the young (Torettos). All these things have led to some interesting conversations. As we move forward, I think we always looking for the right partners, the right situation to be able to tell the stories the right way. 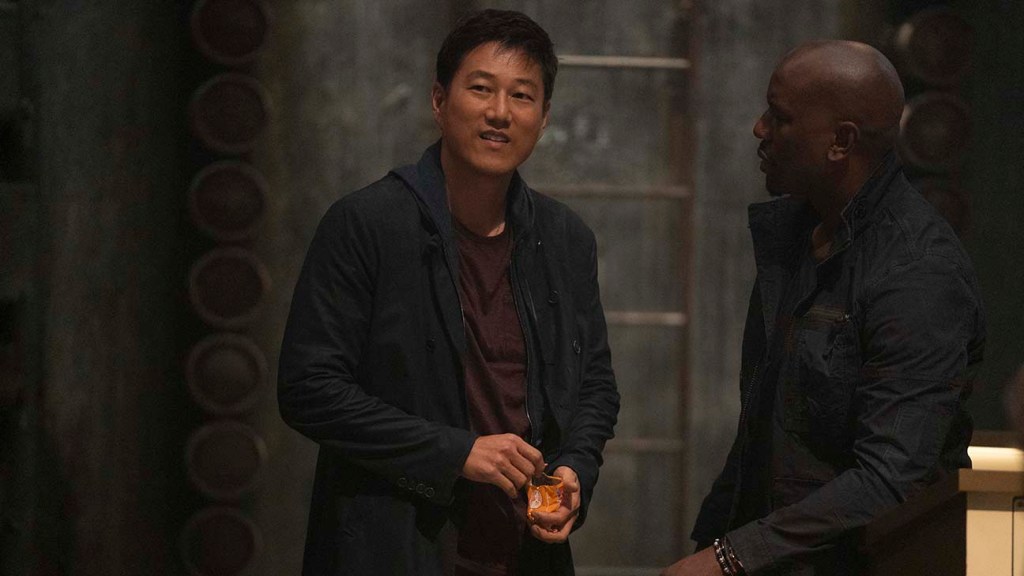 There is a post-credits scene with two actors reuiniting that fans are going to be happy about. How did you know we’d have to end it there?

It’s interesting because a lot of people assume when Han comes back in 9, that’s Justice for Han. I never felt like that’s the case. The issue with Justice for Han is not, “Hey, he’s gone, we want him back.” It was that something was not right and we need to figure out how to correct that. For me, the most critical element of this is the treatment of this character. So Justice for Han, really, is how we treat Han as he comes back and as we move forward. There is definitely a lot to explore and to unpack and that is just a moment I wanted to share with the audience — that there’s a lot more to come.