[This story contains spoilers for The Falcon and the Winter Soldier, episode four.]

“The desire to become a superhuman cannot be separated from supremacist ideals. Anyone with that serum is inherently on that path,” Baron Zemo (Daniel Bruhl) tells Sam Wilson (Anthony Mackie) and Bucky Barnes (Sebastian Stan) early in the fourth episode of The Falcon and the Winter Soldier, “The Whole World Is Watching,” directed by Kari Skogland and written by Derek Kolstad. Zemo admits that Steve Rogers was an exception to his theory. But what makes Steve Rogers mutually exclusive to the idea of being a super-soldier and a supremacist? How did Steve Rogers manage to uphold the concept of Captain America when all of the potential successors to his mantle, Sam Wilson, Bucky Barnes, Karli Morgenthau (Erin Kellyman), and John Walker (Wyatt Russell) are each struggling with what Captain America means, and if one should even exist?

Steve Rogers was afforded the curse and comforts of being a man out of time. To exist as a national and global symbol solely within this modern era and attempt to achieve it in the same vein as Steve Rogers is to ultimately come face-to-face with failure. John Walker, and the world along with him, learns the brutal truth of what that failure looks like in this latest episode.

In Captain America: The First Avenger (2011), Dr. Erskine (Stanley Tucci) says Steve is the right man for the super-soldier serum because he is a good man. But good men can change, through either will or circumstance, and goodness is relative. It was one thing for Steve to stand as America’s “good man” during World War II, fighting against Nazis when good and evil were so clearly defined. But in modern America, the ideals of goodness shifted, creating an open wound between what is and what should be. Steve experienced this wound during the events of Captain America: The Winter Soldier (2014) and Captain America: Civil War (2016), leading him to drop the mantle and become Nomad.

In truth, Steve Rogers spent more time standing in opposition to the U.S. government than alongside it, and for good reason. The evils of American bureaucracy may have been coded through HYDRA and terrorist puppets, but the allegorical intentions were clear: The government — be it in the form of SHIELD, Alexander Pierce (Robert Redford), Secretary Ross (William Hurt), Vice President Rodriguez (Miguel Ferrer) — could not be trusted.

Steve Rogers clearly didn’t represent the U.S. government. So what did he represent? American ideals born of the greatest generation? Supposedly. But truth, justice and freedom aren’t concepts exclusive to America, and as tenets, they don’t even work particularly well for the majority of Americans. As Sarah Wilson (Adepero Oduye) says in the latest episode of The Falcon and the Winter Soldier, “My world doesn’t matter to America, so why should I care about its mascot?” Steve Rogers, therefore, represented a country that did not, and does not exist, in the MCU, or in reality. It’s this very topic that Ta-Nehisi Coates has been grappling with in his current run on Captain America, in which Steve Rogers, unwanted by the government and the American people, is often referred to as Captain of Nothing. And perhaps therein lies the answers to Steve Rogers’ existence as an exception to Zemo’s theory. As a Captain of Nothing, there is no country or concept through which to seek supremacy. And if you’re a symbol that is unneeded and unwanted then you’re granted the luxury of fighting for yourself and those in your personal circle, the people you know. But can that move the world? It certainly didn’t in Sarah’s case, or in Isaiah Bradley’s (Carl Lumbly).

John Walker wants to move the world, even if it means widening the wound. His every action, his impatience, his aggressive loudness is an effort to force change. As the conversation between him and his best friend and partner Lemar Hoskins, aka Battlestar (Cle Bennett), reveals, his efforts in Afghanistan, through which he was awarded three Medals of Honor didn’t change the world, and couldn’t be considered honorable actions in the public eye. He sees the chance to be Captain America as his only chance to prove himself a good man. But who is he moving the world for? Not for the citizens of the world displaced by the Blip, and not for those struggling to make ends meet as resources once again become subject to border regulations. John Walker wants to move the world for America, but only America as it pertains to the government. Yet he’s naive because the government that sent him to Afghanistan to fight a war in which he found no honor is the same one that gave him the shield, through which he’ll find no honor either. He serves a government driven by ulterior motives and a military-industrial complex that chews up young men and women, and leaves the country with deficits impossible to pay off.

Walker and Sam Wilson are both soldiers of modern wars, and yet they walked away from those experiences very different. Wilson turned his attention to healing, to serving as a counselor for veterans. Walker is only looking for the next war, the next target, and if the government says it’s the Flag-Smashers, then it’s the Flag-Smashers he’ll hunt down. “Power makes a person more themselves,” Lemar tells Walker, when asked if he would be concerned with the side effects of taking the Super Soldier Serum. Walker, as viewers soon find out, enhanced by the Super Soldier Serum only, becomes more insecure, more aggressive and more convinced in the moral superiority of his own government. And the death of Lemar, killed by the Flag-Smashers, unleashes something else: a walking mascot for America, the real America, in all of its carelessness, cruelty and displaced sense of justice. John Walker essentially becomes, true to his comic book moniker, a U.S. Agent.

It’s notable that it’s Lemar Hoskins’ death that serves to reveal the true Walker to the world. Though the character hails from the comics, there is certainly something to be said about the Black best friend who serves as emotional support to a white man. Yet, there is intentionality in this trope in The Falcon and the Winter Soldier, and not only in terms of creating foils for Sam Wilson and Bucky Barnes. As the Black sidekick, Lemar Hoskins represents the thing Sam Wilson is afraid of being seen as, which is why Walker referring to him as Cap’s wingman irks him. Lemar Hoskins being seen as less than Walker while doing just as much work, and putting his life on the line just as often, is highlighted in the scene in which Walker is asked for an autograph but Lemar is not. The encounter is played off with a bit of humor, and Lemar mentions that it’s a shame he isn’t asked because he’s worked out a Battlestar insignia to go with his signature. There is a sadness in this admission, surely picked up on by Black viewers, this position of serving the government and still being unwanted. 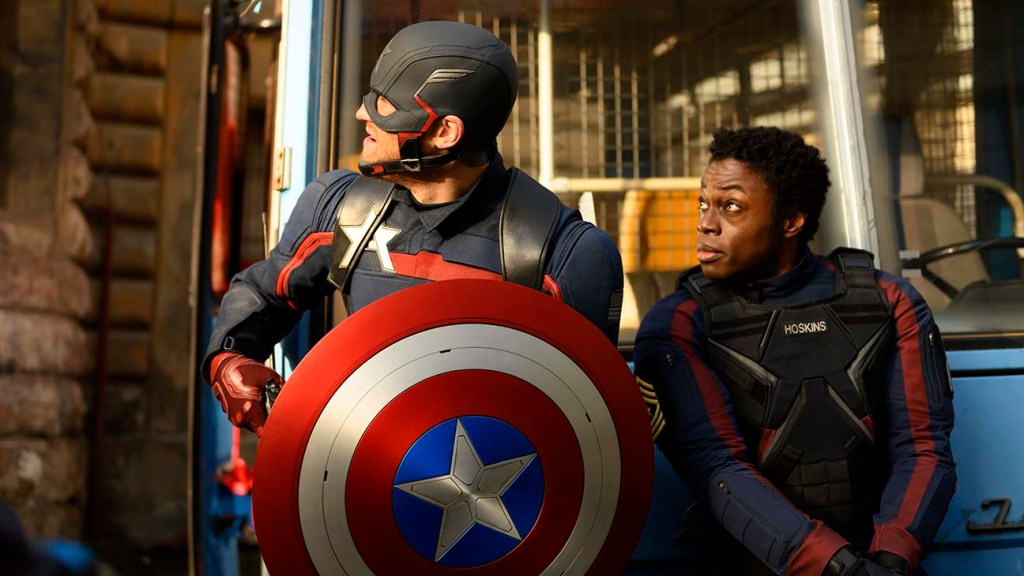 Battlestar has a thankless job, and if Walker represents the government then Lemar Hoskins represents how that government uses Black people, through war as a means to escape poverty, and through poverty as a means to enlist, as has been suggested by Sam’s entry into the Air Force. Walker’s rage in the face of Lemar’s death isn’t performative, but it will undoubtedly be used as an excuse to commit further acts of aggression that only serve to empower the people America wants to empower. It’s a story we’ve seen time and time again in our own reality, the deaths of Malcom X, Martin Luther King Jr., Fred Hampton, Breonna Taylor and George Floyd serving as pulpits for white voices and leaders who fail to enact real change yet still sell the idea of truth, freedom and justice under the notion of American supremacy. As Karli says, “These corporations and the beasts who run them, they’re the supremacists.” Perhaps she’s right, but if so then it seems at best super-soldiers are most often tools for supremacists.

Can there be a new Captain America when America itself, as a whole, does not represent goodness? Is the best we can hope for a Captain of Nothing? If Sam Wilson is ultimately going to take up the shield and the mantle, then he’ll have to do so with the acknowledgment that America as it exists is a failure, the opposite of supreme. He’ll have to become a Captain America that isn’t grounded in past ideals, but one grounded in an America yet to be, one that must be created through enacting real and immediate change, by defying borders, and moving the world by healing it.