[This story contains spoilers for Fantastic Beasts: The Crimes of Grindelwald.]

From a certain standpoint, it’s hard to deny the intense, unbeatable popularity of the Harry Potter franchise. A series of seven books by J.K. Rowling spawned a massively successful octet of films featuring seemingly every iconic British actors and kickstarting the careers of its young leads. And those films and books have led to theme-park attractions across the world, and now a new cinematic franchise, the Fantastic Beasts series. But Fantastic Beasts: The Crimes of Grindelwald — the second entry, opening this weekend — presents a conundrum. In the same way that the film is about characters choosing sides between dark and light, the Fantastic Beasts series seems to pose the question to fans: Are you enough of a fan to get into these films, or do they turn you away?

Rowling, who wrote the film, has promised that this is just the second of a five-film franchise, bringing to life some backstory/mythology involving characters who were mentioned without being fully embodied in the original Harry Potter novels. There’s Newt Scamander (Eddie Redmayne), the awkward and twitchy author of a book called Fantastic Beasts and Where to Find Them, which Harry Potter and his friends would name-check as students at the Hogwarts School for Witchcraft and Wizardry. And, as given a more proper introduction in the second film, there’s the dark wizard Gellert Grindelwald (Johnny Depp), who tries to bring about a wizard-led world, in which those with powers dominate all of us Muggles (known in the prequel spinoffs as “no-majs”). Grindelwald, as the mythology goes, once had control of the Elder Wand, which comes into play in the final Harry Potter novel, until he was defeated by none other than a younger Albus Dumbledore (Jude Law) in 1945.

Depending on your mileage, it may concern or excite you that The Crimes of Grindelwald takes place primarily in 1927, suggesting that the Dumbledore-Grindelwald face-off is a long way away yet. This new film, directed by Potter stalwart David Yates, is all in on fan-service-y elements in place of story. Some of the references and surprises may appeal to you specifically if you understand where they fit in the larger mythology. To wit: Dumbledore gives Newt information on a safe house in Paris should the younger man need to hole up during a mission to find the mysterious Credence Barebone (Ezra Miller). Eventually, Newt and his friends Jacob Kowalski (Dan Fogler) and Tina Goldstein (Katherine Waterston) are much in need of a safe house, so they show up, only to find its owner: none other than the aged Nicolas Flamel. Die-hard fans will recognize Flamel as a key figure in Harry Potter and the Sorcerer’s Stone, though his presence here is mostly used as a joke. (When Jacob shakes Flamel’s hand, the older man winces — because, you see, he’s so old that walking is a challenge for him.) 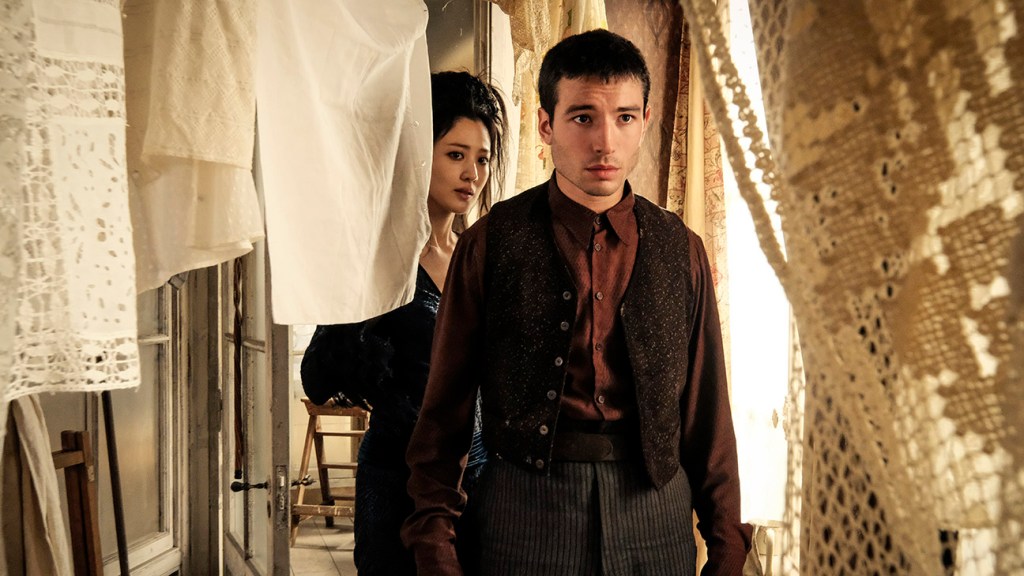 Perhaps the biggest case of fan-service is about Credence, a character introduced in the first Fantastic Beasts film. At least the way that Rowling has set up this universe, Credence is perhaps its most important player. Grindelwald — first when he was disguised as an American wizard and still in this film — believes that Credence can bring about an era of such powerful sorcery that wizards and witches can have dominion over humans. And the good wizards hunting for Credence either believe he needs to be destroyed or that his magic can bring about a reversal of fortune. It’s all tied to one very important question: Who is Credence, really? It’s clear that, because of his intense magical powers, this guy’s not actually just a random American orphan. Throughout much of this film’s 134 very long minutes, almost every character discusses the rumors of Credence’s birth. For a while, the suggestion is that he’s secretly the brother of Leta Lestrange (Zoe Kravitz), previously thought to be dead. When Leta tearfully reveals that she inadvertently killed her baby brother, that rumor becomes dead in the water. After a fiery climax where Grindelwald attacks a roomful of Ministry of Magic wizards, he convinces a few of the pre-existing characters, including Credence, to join him. There, he bestows upon Credence his supposedly true name: Aurelius Dumbledore.

Yes, really: Albus Dumbledore has another brother, one who’s never been discussed before. (Or, conversely, Grindelwald is lying to Credence. Anything’s possible!) This reveal may excite those fans in the crowd who have wondered about the good wizard for years, and the depths of his characterization. But it’s also likely to alienate the more casual Harry Potter fans, in the same way that the entire film alienates such fans who care less about the mythological detritus of the Potter-verse. And while it’s noble for Rowling to create a deliberate comparison between how Grindelwald seduces his followers and the current political climate, it falls apart because a) Depp’s performance is the opposite of seductive and b) the characters are awfully hard to invest in.

When the first Harry Potter book was published, and began to inflame the imaginations of people around the world, the series being seven books long was baked into the basic premise of a boy going through seven years of schooling. The notion that there are going to be five Fantastic Beasts movies, with The Crimes of Grindelwald being just the second, feels reverse-engineered to make sure Warner Bros. can just keep raking in the cash. Some fans will no doubt flock to this new film, and enjoy revelations about other longstanding characters (such as the random revelation that the fearsome snake Nagini was a human woman first) in Rowling’s Wizarding World. But for anyone who loved the Harry Potter series without getting caught up in the potential backstory of every random character, the Fantastic Beasts films are a disappointing drag.