[This story contains minor spoilers for Fantastic Beasts: The Crimes of Grindelwald]

As J.K. Rowling’s Fantastic Beasts series hopes to find similar success and audience investment as the Harry Potter series, it’s placing bets on a villain with a familiar name played by one of the world’s most recognizable actors. Johnny Depp’s frosted-tipped and heterochromia-affected Gellert Grindelwald has the tough act of following Ralph Fiennes’ snake-faced Lord Voldemort. While Grindelwald’s downfall and ultimate fate is known by those familiar with Harry Potter lore and the specifics of the Elder Wand, The Crimes of Grindelwald seeks to make the villain just as enticing and memorable as He Who Must Not Be Named. Fantastic Beasts and Where to Find Them (2016) may have initially suggested zoological adventures, it’s clear now that the five-part film series is aiming for something a lot grander in scope and predicated on how believable of a threat Grindelwald can pose despite our knowing of his eventual imprisonment in Nurmengard and death by Voldemort’s hand. With the endpoint already set, can Grindelwald beat the odds and become the villain the series needs and a worthy Wizarding World follow-up to Lord Voldemort?

Long before he was ever revealed in full, Rowling built up the threat of Lord Voldemort as the ultimate evil, and a threat that could not only prove ruinous to our beloved characters but also provide nightmares for the series’ primarily young adult readership. In both the novels and the films, Voldemort wasn’t truly seen until the conclusion of Harry Potter and the Goblet on Fire. While the previous installments certainly never let us forget his presence, Voldemort didn’t take center stage until the series was halfway finished, and even then kept his plans and backstory largely shrouded in mystery until The Half-Blood Prince and The Deathly Hallows. In the 2005 film adaptation of The Goblet of Fire, the dark wizard was memorably played by Fiennes, a two-time Oscar-nominated actor, who wasn’t immediately recognizable to Harry Potter’s key demographic but was nonetheless embraced by fans for his delightfully wicked portrayal. 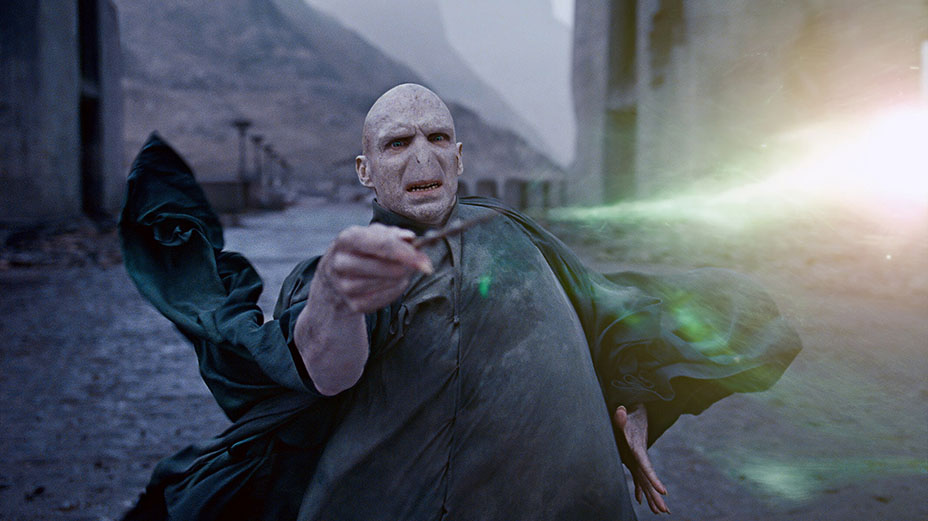 There’s a glee in which Fiennes tackles the role. He portrays Voldemort like a cult leader, who draws an assortment of freaks and madmen to his cause. As memorable as Fiennes’ portrayal is, there’s something about the onscreen version of Voldemort that holds him back from being one of our great onscreen villains or attaining the same complexity he has in Rowling’s novels. There’s a self-hatred Rowling establishes in the books through Voldemort’s loathing of non-pure blood wizards and witches, himself included. While the films make no secret of his racially motivated desires to wipe out non-purebreds in a way that smacks of Adolf Hitler’s infatuation with building an Aryan race, his motivations — a fear of death, a loveless existence, and an unquenchable sadism, is largely unexamined as a result of an omission of the flashbacks that made up much of Rowling’s Harry Potter and the Half-Blood Prince. The films keep the viewer at an arm’s length from Voldemort. He is evil from childhood, rather than, as the books suggests, evil as a result of systemic racism and poverty within the wizarding world. As a result, we have a villain who looks memorable and is performed phenomenally, but outside of moments of exposition feels unconnected to the larger wizarding world and the moral gray areas that make up any society. To further the previous comparison, most people would prefer not to feel sympathy for Hitler or seek to understand his insanity as a human, rather it’s easier and more emotionally cathartic to cast him as a villain we can all agree to hate.

Grindelwald isn’t as easy to hate. There is of course the factor going into The Crimes of Grindelwald that the vast majority of audience members are familiar with the character and aware of his relationship and love for Dumbledore when they were both younger men. But it’s not so much that he was, and perhaps still is, loved by a character whom we love that makes him difficult to earn our hate, but that his message is so seductive. While Voldemort spread hate, Grindelwald spreads one of brotherly and sisterly love — racially motivated of course, but, at least according to his public image, not without room for miscegenation. He seeks to remove Muggles from power, in an effort to prevent the world’s destruction. While the ’90s-set Harry Potter series was largely removed from the larger goings-on of world events, The Crimes of Grindelwald is set shortly after World War I. The threat of World War II and nuclear weapons, of which Grindelwald shows prophecies, looms overhead. Voldemort sought to save himself, while Grindelwald seeks to save the world. He’s by no means heroic in this effort, but he is more firmly situated in the world and speaks more to the cause and effect of two massive societies co-existing. His question is simple: Muggles are the route to ruin, so why not usurp them with a race of wizards who could maintain order? This is easier said than done of course, but it does earn him the ears of men, women and children who see the logic in a dark wizard who seeks, not immortality for himself, but the long lives they each deserve.

Grindelwald certainly doesn’t look as neat as Voldemort, but his methods of manipulation, of bending the truth, setting others up as villains, and preaching non-violence while instigating it are certainly eye-catching. It’s interesting that the contemporary narrative of the Wizarding World in Harry Potter utilized Hitler as its villainous point of reference, while the narrative set during the time of Hitler’s life instead uses modern political leaders for the basis of Grindelwald. From his rallies, his patriarchal presence and indirect cries of fake news, Grindelwald makes a case that appeals to people at the end of their ropes, not simply evil people, but lost, desperate, and undereducated people looking to define themselves through their opposition of others. And Depp, who is so often known for chewing scenery and adopting wild accents, portrays Grindelwald with a calm confidence of a man who has already won. And it’s this factor that throws the veracity of his fate into question and ups the stakes. Grindelwald isn’t simply a villain for our heroes to throw spells at, but one who changed the hearts and minds of otherwise innocent people and started a war that can’t be combated through duels. Grindelwald isn’t as enticing a villain as Voldemort, but for right now at least, he does open up the socio-political factors of the wizarding world in a way that feels more relevant.