The wizarding world established in print by J.K. Rowling and then on film by Warner Bros. keeps expanding with this week’s Fantastic Beasts: The Crimes of Grindelwald. The movie, the second in the Fantastic Beasts series that is set decades before Harry Potter enrolled at Hogwarts, picks up with Newt Scamander (Eddie Redmayne) being enlisted by Albus Dumbledore (Jude Law) to find the recently escaped magical criminal Gellert Grindelwald (Johnny Depp).

The film is projected to open to $65 million-plus in its debut. That would be among the lower opening weekends in the Harry Potter series dating back to 2001, at least stateside. Warner Bros. mounted a campaign that has sought to not only connect directly with fans but to make sure those fans understand this movie is directly tied to the Harry Potter series they love.

Newt stands facing the camera while Dumbledore is at his back on the first poster, released in March, giving the audience what they want, which is a look at Law in character. There’s no copy other than the title, just a flash of lightning in the background adding a sense of dread, or at least trying to.

At San Diego Comic-Con in July two posters were released. One looks like a book cover, with some characters inside a frame and others placed in the circles in each corner while the rest of the frame is filled with illustrations of locations or creatures presumably important to the story. Another just uses a photo of the whole cast inside a symbol, with copy asking, “Who will change the future?”

A series of posters featured each one of the main characters in close-up, with a brief description of what their situation is as the story picks up. Another shows Grindelwald walking toward the Eiffel Tower. Another series paired up different characters, each one reminding the audience that the story deals with “The fate of one. The future of all.” A variation on some earlier art came next, with Newt at the center of the action and the supporting characters arranged around him.

Newt and Albus are both shown on the Dolby exclusive poster, with copy between them asking, “Who will change the future?” which attempts to lay out the stakes of the story. The Imax one-sheet features drawings of the characters. Both those were released in the last couple of weeks before the movie hit theaters.

The final theatrical poster has the three main players — Newt, Dumbledore and Grindelwald — at the top while the rest of the characters are at the bottom, everyone with wands at the ready and the international locations where the action takes place seen in the background.

Dumbledore is being questioned as the first trailer (19.5 million views on YouTube) from March opens, specifically about where Newt is and whether or not he’s in Paris under Albus’ orders. He denies that, but it’s shown they’re in cahoots in some manner. There are fantastic creatures, returning characters and more in the middle of the trailer as we get a sense of the look and feel of the movie.

A second trailer (10 million views on YouTube) debuted at Comic-Con along with the appearance of cast and crew. The focus here is on the dynamic between Dumbledore and Newt as the former recruits the latter into the fight against Grindelwald, who is out to rule the wizarding world and bring the muggles to their knees. There’s lots of dramatic music and shots of magical creatures roaming about.

The final trailer (11 million views on YouTube) arrived at the end of September and offers more of the plot, explaining a bit more clearly what Grindelwald has in mind and what Newt’s mindset is through all this, including him stating that he doesn’t “do sides,” meaning he has no interest in whatever conflict is coming. Dumbledore, though, demonstrates that’s not an option as we see lots of scenes of magical happenings and fancy creatures.

For both Comic-Con and the final trailer, Warner Bros. released “fan reaction” videos. Each one was meant to show how people were responding positively and enthusiastically to the character reveals, plot details and other new information offered as well as to the look and feel of the trailers as a whole. 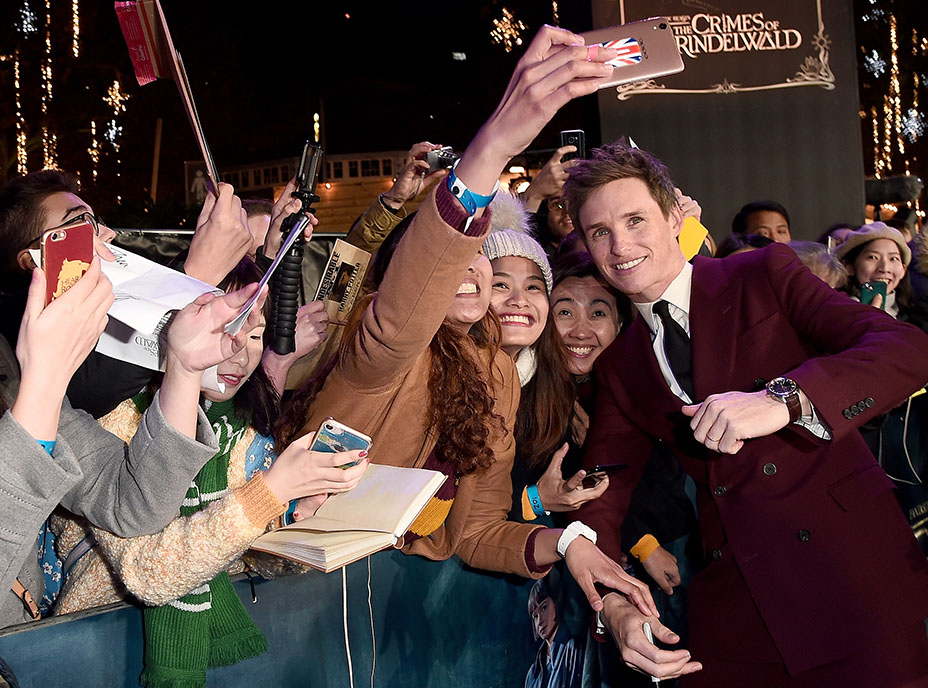 One of the first marketing moves for the movie came in November 2017 when two wands were shown that spurred lots of speculation because one of them was clearly the Elder Wand used by Dumbledore in the Harry Potter series. A first look at the cast as well as the name of the movie were revealed shortly after that, including the first look at Law as a young Dumbledore. That photo was met by a backlash centered around Depp being in the cast. His alleged history of on-set behavior, as well as allegations tied to his separation from his ex-wife Amber Heard, colored some reactions to him being cast in what has been sold as a family-friendly franchise.

Some of the movie’s stars showed up to help sell the movie as a big, surefire event at both CinemaCon and CineEurope industry events. In addition to the trailer and poster, promotion at Comic-Con in July included the movie being one of the properties placed by Warner Bros. on bags given out to attendees. The studio also brought the cast out onstage during its panel presentation. While Depp wasn’t part of the Q&A with the others — likely to avoid an uncomfortable set of questions — he did make an appearance in character to deliver a dramatic monologue related to the story.

An Instagram AR filter was made available as part of the overall #WandsReady campaign, allowing people to add a bit of magic to their videos on that platform. That campaign continued in the first TV spot, which encouraged people to get their tickets in advance.

The “Back to Hogwarts” campaign, launched in early September, sought to more explicitly connect this movie’s story with the overall Potterverse, with a featurette about how the wizarding school was brought to life once again, and appearances by Law and Redmayne at King’s Cross Station to visit Platform 9½.

Also in September, Rowling and the cast and crew made a major stop in New York, including TV appearances and more in connection not just with this release but also with the stage production of Harry Potter and the Cursed Child on Broadway. Billboards in Times Square debuted the final trailer along with a stream of real-time Twitter reactions.

Mid-October saw an “Adventure Continues” featurette released, which had Rowling and others talking about where the story is as this new movie picks up and what’s going to drive the character’s actions. An additional “Magic Continues” featurette aimed to connect this movie to the rest of the Harry Potter series, explaining to fans that this one features lots of familiar characters.

In early November, members of the cast continued their publicity tour with a Q&A for fans after a screening of the movie at the Wizarding World of Harry Potter, footage from which was quickly turned into a promotional spot. They then stopped by a school in Baileyton, Alabama, that had transformed its hallways and classrooms into re-creations of Hogwarts as part of a campaign to encourage student acceptance, safety and creativity.

Promotions for the movie included:

? AT&T, Warner Bros. corporate parent, decked out its stores in posters and other artwork for the movie while also launching a hub for the previous Potterverse movies on DirecTV. Other company channels and outlets offered exclusive content and a sweepstakes for a trip to the premiere.

? Google ran online video ads featuring footage from the trailers to promote the ease of looking up showtimes and buying tickets on its search engine.

Online ads promoted a special “fan screening” event across the country this past Tuesday, an attempt to draw out the superfans who wanted to get an early look at the movie and spur word of mouth to the rest of the general audience.

Just days before release, a Harry Potter-themed augmented reality game was announced that wasn’t specifically tied to this movie but certainly was meant to appeal to the same fans and take advantage of the timing. 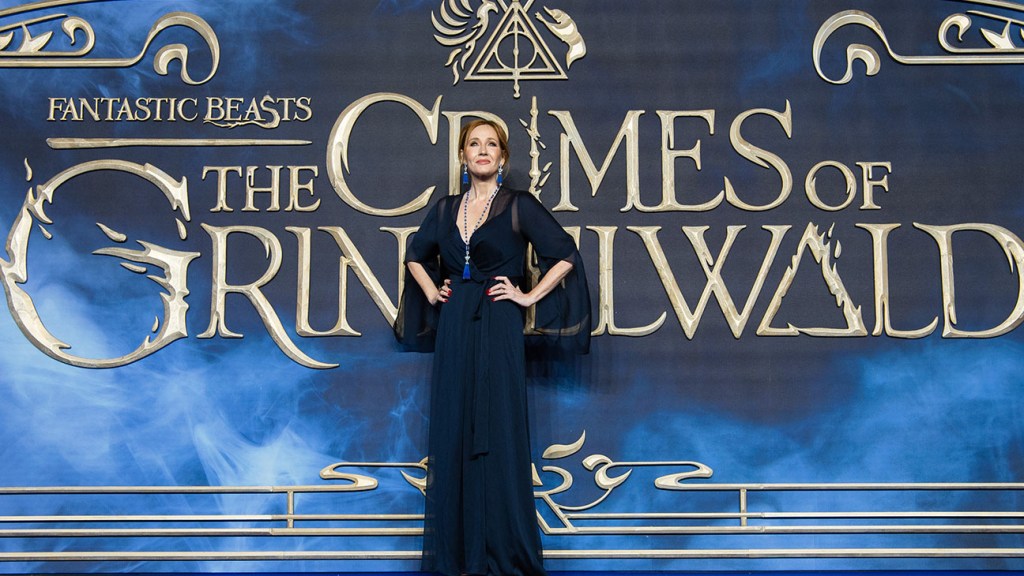 This time around, there was a concerted effort to make sure Potter fans knew this was something that they could rally around. That message is behind much of the campaign, from the numerous fan events and screenings to the featurettes that highlighted how this story lays the groundwork for the Harry Potter series that, chronologically, comes decades later.

That stands in contrast to some of the marketing of the first movie, which was mostly focused on selling the story of Newt Scamander and introducing him as more than a footnote in the history of the Potterverse. Now, the studio wants everyone in the audience to get their #WandsReady and join the fun, which is why those trailer reaction videos were released.

Also less spotlighted in this campaign was that this is the second of five planned films. That was a bigger part of the marketing of the first movie, promising fans lots more wizarding to come, but now the message is to simply enjoy this one.