What happens to a country when a new leader elected on the promise of rebuilding his nation to greatness then decides not everyone is welcome there? That’s the question at the heart of the next installment in Ubisoft’s Far Cry franchise.

Currently in development and expected to launch Feb. 18, Far Cry 6 takes players to the Caribbean nation of Yara. In the sprawling capital of Esperanza, which seems to be frozen in time, a revolution is underway to overthrow President Antón Castillo, a dictator who subdues anyone who attempts to block his plans to return the country to its former glory. As revolutionary Dani Rojas — a character that can be played as a man or woman — players get swept up into the guerilla combat.

The developers at Ubisoft Toronto behind Far Cry 6 didn’t want President Castillo to come across as a one-dimensional villain, so they gave him a 13-year-old son, Diego, who he’s grooming as his successor. To hear narrative director Navid Khavari tell it, once that father-son dynamic had been locked into place, there was only one person they wanted to voice Antón Castillo: Giancarlo Esposito.

To secure Esposito’s involvement, the team flew to New York and met with the Emmy nominee in what Khavari calls a “giant loft space.” During the four-hour meeting that followed, for which Esposito had prepared extensive notes, they discussed Castillo’s history and motivations. “This is a performance that people are going to be excited about because he really decided to do a very different twist on Antón,” says Khavari. “It’s going to feel very fresh.”

Acting alongside Esposito is Coco‘s Anthony Gonzalez. Khavari says Esposito “really took him under his wing.”

Esposito, who stars as Moff Gideon in Disney+ Star Wars series The Mandalorian, joins Far Cry after having appeared in Payday 2. He got on the phone with THR ahead of the Far Cry reveal to talk about his return to gaming and the influences he drew from for the role. 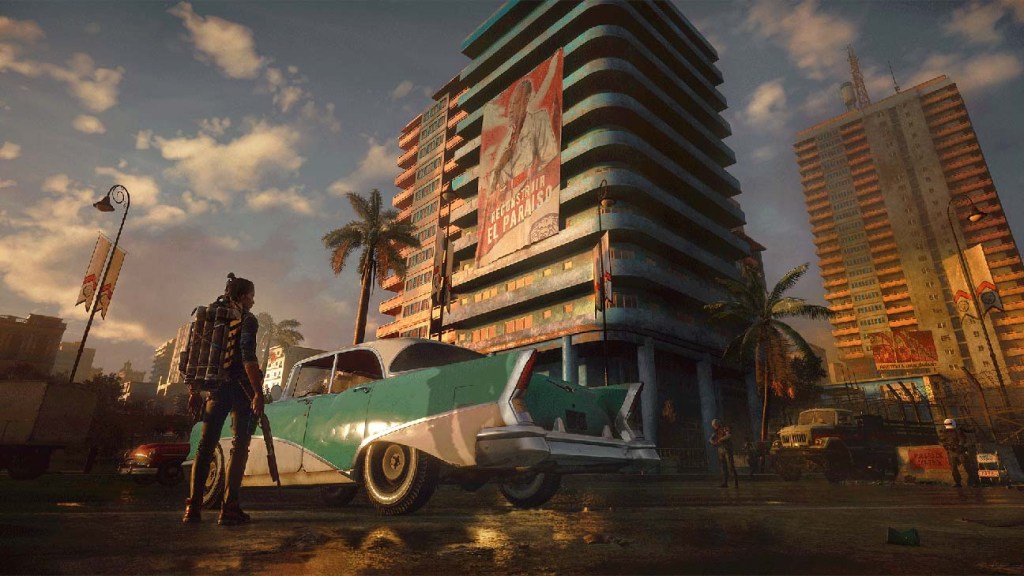 What was appealing about this project that made you want to step back into gaming?

Pay Day 2 was a very different shoot. It wasn’t motion capture at all. I had some experience with director Wes Ball on his film Mouse Guard before it got shelved during the Disney-Fox acquisition, so I had about a week and a half of working in a motion capture suit. I found it challenging, but it introduced me to this whole world. So, when Far Cry 6 came up, I was interested because we never completed the movie and I was also just getting comfortable working in this space. To use just your physicality and face and emotions, it reminded me a bit of doing a stage play. I come from theater, so it was a way for me to explore this new world and get back to my roots, as well.

Did you consult with other actors who have done performance capture work in games while shooting Far Cry 6? Your Better Call Saul co-star Michael Mando actually starred as the villain in Far Cry 3.

I didn’t consult with Michael, but we did have a conversation at the premiere of Better Call Saul season five. I mentioned to him that I was doing this game and said I was going to ask Ubisoft to show me what you did. He said he enjoyed his time working on Far Cry 3 and was excited I was going to be a star in Far Cry 6. He fell short of giving me any pointers. I would have liked to pick his brain about how it works, but I know from game to game it’s very different. I also know that Far Cry 6 is going to open up a whole new world in terms of all the games they’ve done before. That’s a teaser …

Do you play video games?

I’m not a gamer myself, but I’ve become a fan on this particular project. I find it fascinating that it all comes from coding and how it all blends to bring a game to life. In our case, we’re really making a movie that will have more resemblance to a real film than ever before.

Your character is a sort of dictator and the game deals with themes of nationalism. Did you take any influence from real-world leaders or politics?

I’m very interested in third-world country where dictators have taken power and taken advantage of their population. [Zimbabwe’s Robert] Mugabe is one, obviously [Cuba’s Fidel] Castro is another. I’m interested in those countries in Africa where there are leaders who have such great resources but haven’t been able to take advantage of them and use them for their own country. I haven’t drawn from any of that experience — because I’ve been to Burkina Faso, I’ve met a couple of dictators. What I get from them is an overwhelming sense that they’ve seized power and control but what’s lacking to me is their ability to translate that into caring and compassion for their people. There are some seeds there that I felt like I would like to cultivate in terms of seeing a different type of dictator. I feel like we have an advantage with some of the themes in our piece to open up people’s eyes to the flip side of that. I really like the story of King Solomon, someone who ruled with an iron hand but shared his wealth with the people and empowered them. We have an opportunity to tell a story that is a little larger than the particular dictator story that we’re privy to in our news and our history.

How do you make a captivating villain?

A good villain is a human being. As an actor, if I have an opportunity to portray a real human being, then you’ll see all the black and the white of that personality. For years, we see villains and we’re afraid of them and normally hate them. What makes a good villain is to make the audience love and hate them.