Continue to The Hollywood Reporter SKIP AD
You will be redirected back to your article in seconds
Skip to main content
May 5, 2018 11:23am
Logo text

Fast & Furious fans may not have a new film to look forward to this year, but they can still buckle up and hang with the franchise’s family at Universal’s Orlando Resort. The Florida theme park’s latest attraction, Fast & Furious – Supercharged, leverages a garage-load of tech, effects and props to put guests in the middle of a high-speed chase through the streets of San Francisco.

Heat Vision was among a group of media previewing the attraction in honor of its opening this week.

As the attraction’s story goes, parkgoers have been invited to an afterparty to celebrate Dom Toretto’s (Vin Diesel) latest victory on the blacktop. Shortly before boarding the ride’s bus-like vehicles, however, it’s revealed that both the FBI and franchise foe Owen Shaw (Luke Evans in the movies) are about to literally crash the party. From there, patrons are seated in trackless transports, surrounded by screens depicting the sort of over-the-top action you’d expect from the tire-screeching series.

Brought to life by a glasses-free 3D technology, the attraction is like one extended set-piece, complete with Michelle Rodriguez’s Letty attaching grappling hooks to the ride vehicle to propel it forward, Dwayne Johnson’s Hobbs firing a gun the size of a Volkswagen, and Diesel’s Dom hanging from a helicopter’s landing skids. Coupled with multiple sensory and physical effects, from heat and smoke to the vehicle’s various built-in vibrations, the ride movie manages to convey an incredible sense of motion and speed (even though in reality the movement is minimal). 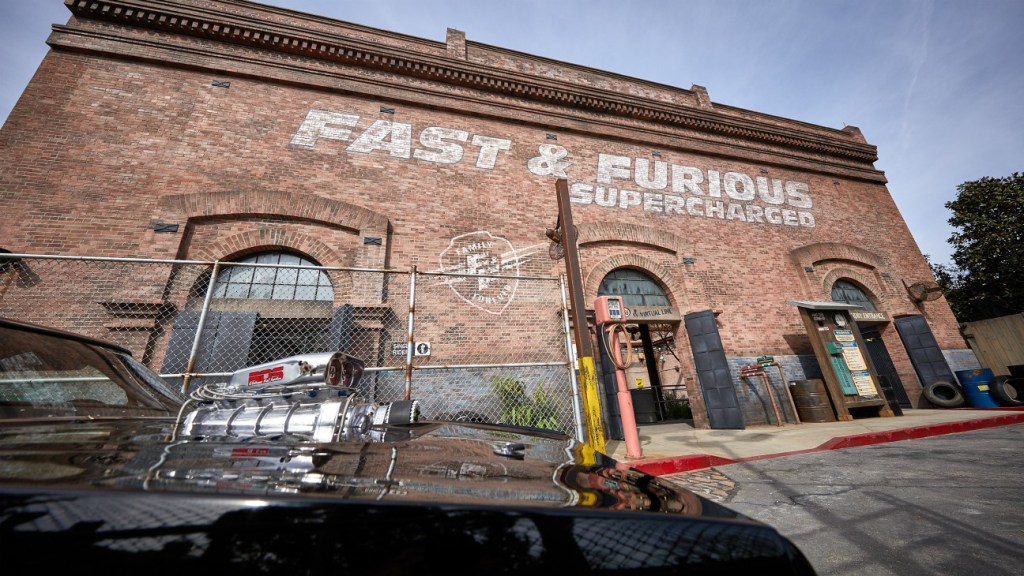 At six or so minutes, the attraction is breathless, but brief. The time you spend tearing up the pavement in the “party bus” though only represents one part of the total experience. Unlike Universal Studios Hollywood’s version of the attraction — which serves as the concluding portion of the California park’s tram tour — Florida’s Fast & Furious ride is a standalone experience, featuring live actors, pre-show encounters, a highly themed queue and more Easter eggs than you could cram into the trunk of Dom’s Dodge Charger. 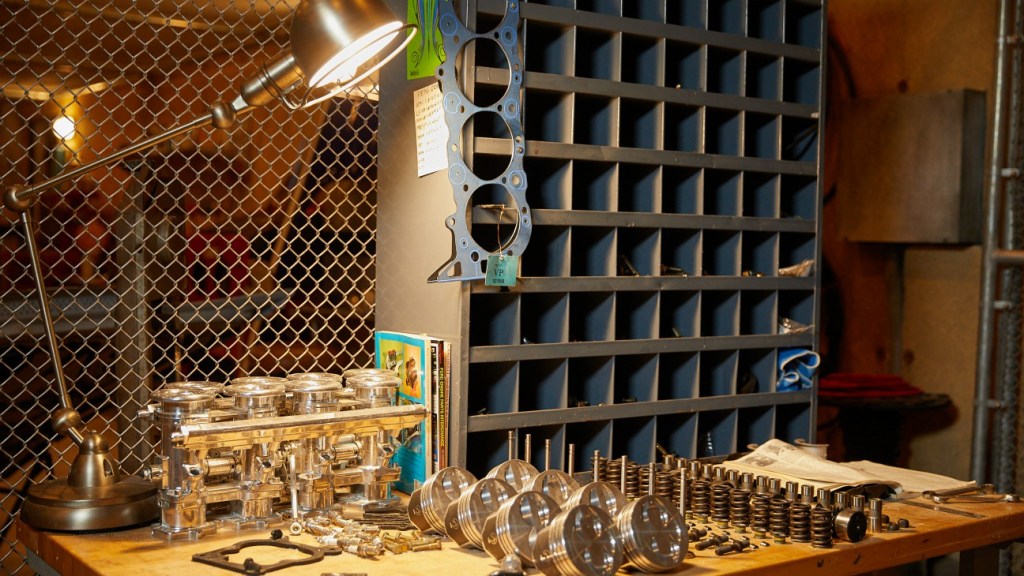 Spread over multiple rooms, the attraction’s queue has been constructed to look like the F&F crew’s warehouse headquarters. In a presentation prior to the ride’s official opening, Universal creative’s vice president of attraction development Don MacLean joked about his team’s efforts to make a brand new building look 85 years old. It seems he wasn’t kidding though, as the detail-drenched pre-ride area doesn’t just feature the expected stacks of tires and tables of mechanic’s tools, but all the rust, dust, dirt, and debris you’d find in a real-world, working garage.

Beyond the detailed grit and grime, the headquarters is filled with props of both the automotive and action-adventure variety, including grappling hooks, bulletproof vests and ammo crates. There’s also more than a dozen vehicles to ogle; some from the films, others built specifically for the attraction, but all handcrafted by the man behind the movies’ cars, Dennis McCarthy. Fans with an especially keen eye will also spot cool, story-expanding call-outs, like a pile of pink slips and car keys won by Dom, as well as a nice nod to the late Paul Walker’s character Brian O’Conner. 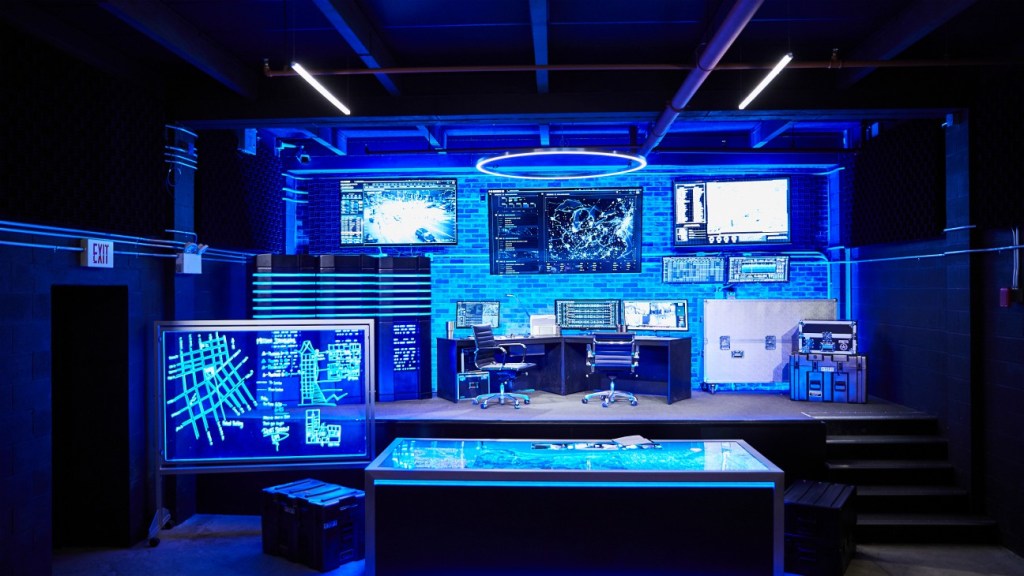 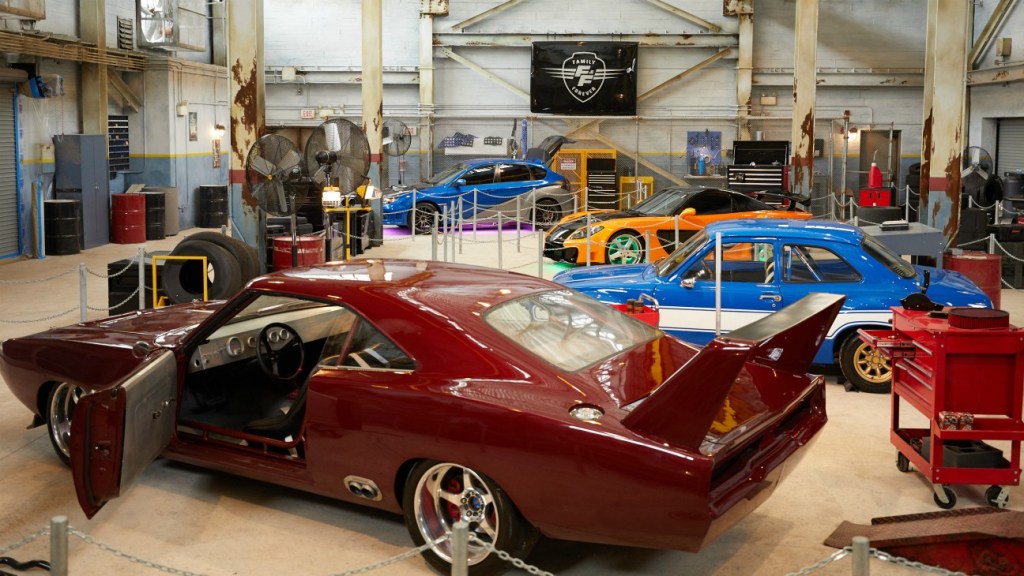 Once you’ve soaked in the fan-servicing surroundings, you can power-up your smartphone to test your F&F knowledge; using Universal’s official app, parkgoers can participate in a trivia game, then see how they stack up on a score-tracking display screen posted in the queue. Visitors can also use the app to reserve a ride time, a part of the park’s recent “Virtual Line” system that aims to eliminate wait times.

While the speed limit-abusing portion of the attraction is the main draw, fans of the films will also appreciate the incredible authenticity that’s gone into all the pre-ride elements of the experience. In fact, the franchise’s most faithful followers may want to explore the queue multiple times to discover every last immersion-cranking detail. Of course, even if you’re not a fan of the “family”, riding an attraction that seemingly travels 100 mph faster than the park’s Hogwarts Express should provide a nice change of pace. 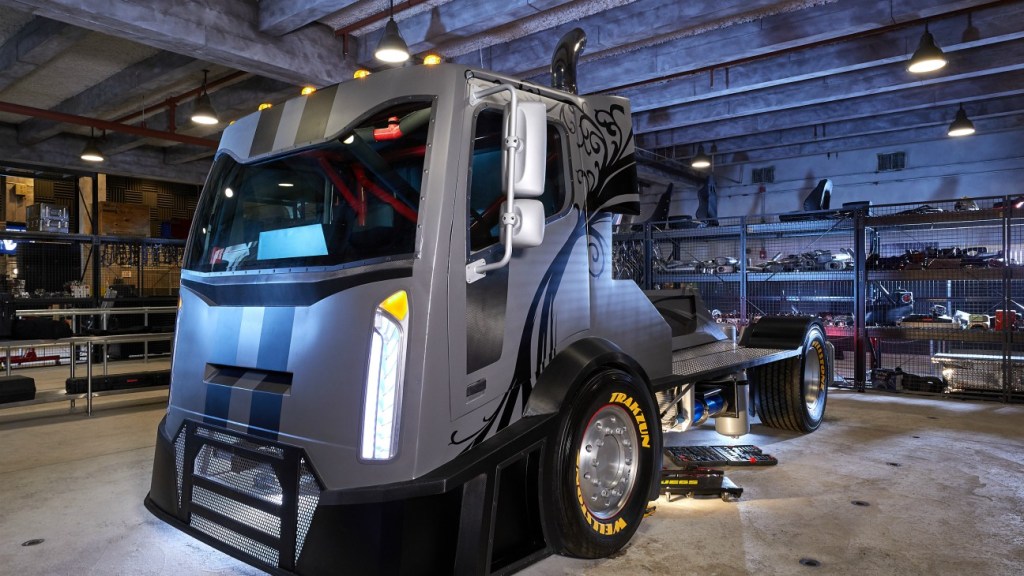