Continue to The Hollywood Reporter SKIP AD
You will be redirected back to your article in seconds
Skip to main content
April 15, 2017 6:00am
Logo text

[Warning: This story contains minor spoilers for The Fate of the Furious.]

Dominic Toretto (Vin Diesel) lives life a quarter-mile at a time — and he doesn’t like to look back. But with the release of The Fate of the Furious — the first film in the high-octane franchise not to feature late star Paul Walker — it’s hard not to take a look back at where it all began.

In preparation for Fate, I watched 2001’s The Fast and the Furious, the film that jump-started one of Hollywood’s biggest franchises. And I must admit, viewing Fast right before seeing the new adventures of Dom and his expanded crew is a whiplash-inducing experience.

The word, “family,” for instance, is now the core of the series; the premise of Fate of the Furious is that Dom has inexplicably betrayed his family to do the bidding of an enigmatic, all-powerful hacker named Cipher (Charlize Theron). The theme of family is front and center. But in the Rob Cohen-directed original, the word “family” is only uttered twice, and both times by characters who appear just in the first film: the boss of Walker’s undercover LAPD officer Brian O’Conner and the thuggish Johnny Tran (Rick Yune).

Yes, family is still a driving factor for Dom, his girlfriend Letty (Michelle Rodriguez) and his sister Mia (Jordana Brewster). But the word itself isn’t mentioned over and over again as it is in Fate of the Furious, written by frequent F&F screenwriter Chris Morgan. (It wasn’t until Morgan’s Fast & Furious 6 that family became the franchise’s buzzword.)

In Fate, Theron’s Cipher knows all too well that family is Dom’s Achilles’ heel, with her suggesting that it’s a lie that Dom’s brain uses to survive each quarter-mile; she even subverts the idea of family, suggesting to Dom that he only loves to race because it’s the only place where he’s free of family.

Fate talks the talk, but it oddly is less willing to embody the loyalty Dom has embraced in past entries. In Fate, we eventually learn why Dom is betraying his family, without fully grasping why he couldn’t tell them that he’s working for the enemy. Similarly, the new film allows us to see baddie Deckard Shaw (Jason Statham) as a nuanced character instead of a one-dimensional villain. But this movie glosses over what made Deckard was so nasty in Furious 7: He killed Han (Sung Kang), a member of Dom’s “family.” Yet Deckard is accepted into the fold — and rather quickly. As Dom has said before, you never turn your back on family, so why would all be forgiven? 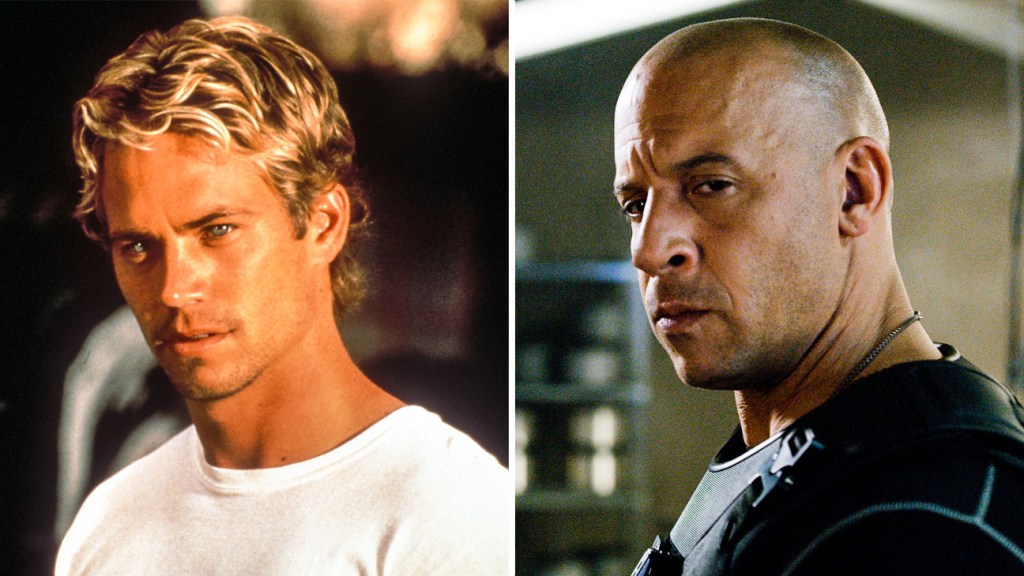 As the franchise has become more focused on paying lip service to family, it’s also strangely become more impersonal, no more so than with Fate of the Furious. Directors Justin Lin, James Wan and now F. Gary Gray have chosen to focus on action, attempting to top themselves with each new film. Cohen’s original had a few notable setpieces, specifically a heist-turned-rescue on a two-lane highway. The most ridiculous flourish, perhaps, is when both Dom and Brian were able to separately outdrive an oncoming train in the final scene.

As the series has progressed, action setpieces have piled on top of each other like the crashing cars in those scenes. There’s even a visual homage to Dom and Brian outrunning the train in Fate — when Dom evades a heat-seeking missile with his souped-up car during a battle with a Russian submarine. That sentence alone suggests how vastly different Fate is from The Fast and the Furious: In the latest movie, our heroes take on submarines and missiles, and win.

This approach is symptomatic of most sequels: It has to be like its predecessor, but bigger. After seven movies where Dom, Brian and a crew of criminals and federal agents take on an endless supply of bad guys, why not avert World War III in their cars?

But with Fate, it’s more apparent than ever that Walker truly was irreplaceable — the magic he brought to the screen can’t be replicated, nor can the chemistry between Diesel’s Dom and Walker’s Brian. Part of why Furious 7 felt so cathartic was its functioning as a belated swan song for Walker, sending him off as emotionally as possible. With Walker gone, the series has been smart to avoid an attempt to replicate that chemistry with Diesel and, say, Dwayne Johnson or Statham.

Yes, there’s a tribute to Walker in this film, but the hole left by that missing Dom/Brian bromance is felt throughout Fate with nothing to replace it or anchor the film. Dom spends so much time separated from the rest of his crew in Fate to the point where Diesel feels like he’s in a different movie. We get more of Roman (Tyrese Gibson) and Tej (Ludacris) joking around, and the burgeoning, begrudging friendship between Hobbs (Johnson) and Shaw. Neither duo, though, can hope to match the connection Dom and Brian shared through seven films. The original film is pitched at a lower key, but it feels truer to the spirit of the franchise than Fate does.