[This interview contains spoilers for Fear Street parts one and two.]

Hollywood has taught Kiana Madeira that even an audition that doesn’t work out can lead to good things. And in some cases, it can lead to two roles spread over three films.

Several years ago, Madeira auditioned for director Leigh Janiak for a television pilot. While the actor didn’t book the role, Janiak remembered her when it came time to cast Deena, a teenager living in author R.L. Stine’s fictional town of Shadyside. Deena and her friends find themselves on the wrong side of an ancient curse as they unravel its mystery over three Fear Street movies, which Netflix has been releasing once a week this month.

Madeira, also known for Netflix’s Trinkets, dives into a new role for Friday’s Fear Street: Part 3 – 1666. As is revealed in the final moments of last week’s Fear Street: Part 2 – 1978, she will portray Sarah Fier, the villainous figure at the center of the trilogy, with the final installment looking at Fier’s 1666 backstory. The trilogy has apparently been a hit for Netflix. While the streamer does not release viewership numbers, both 1994 and 1978 have appeared on its list of top ten streaming titles in the U.S.

In a conversation with The Hollywood Reporter, Madeira reflects on juggling multiple roles that spanned centuries, crafting a love story at the heart of the trilogy, and working with a dialect coach to nail Sarah Fier’s accent.

Take me back to the beginning. Did you know you were auditioning for three movies?

Who was the chemistry read with?

The characters they were casting were Deena and Sam. There were six actors there. We all went in, mixing and matching and doing a couple of scenes together. It was in New York and we were there for probably six hours. It was an interesting experience because, throughout those six hours, all of the actors were in the same waiting room together so we all got to know each other. It’s weird being with actors in a room and knowing, “Only two of us are going to get these roles.” Everyone I met there was so cool.

What are your first impressions of meeting Leigh? She must have had a strong vision to be able to tackle three movies at once.

I met Leigh at an audition for a pilot. It was a year prior to my initial self-tape audition for Fear Street. Leigh told me that after that original audition, which I didn’t book, she had me in mind for this role. That was cool. And also broke the ice, because Leigh is a superwoman. Even working with her on set, having to do three films back-to-back-to-back. All-day, every single day. She still had this really cool, chill energy about her. She was so specific in what she wanted. Having Leigh as a captain of this ship, it couldn’t have turned out better, having her at the head.

We went back in forth between the first movie and the third movie. We shot those two movies first. 1994 and 1666. Throughout that time filming those two movies, we did go a little bit back and forth. We were fortunate that most of the 1666 stuff we did shoot all together. We were filming out in Hampton, Georgia. It was so amazing. They built a village for us to shoot in. It made our job as actors so much easier. It really felt like we were in that world. After we finished the first and third film, then we went on to film the second film at the summer camp.

We worked with Charlotte Fleck, who was our dialogue coach. We actually started working with her in the beginning of filming the first movie. We would do sessions with her on the weekend, just so when it came time to shoot the third movie, we were really dipped into the accent. It was important to us and to Leigh that it didn’t seem like we were characters putting on an accent. We really wanted it to feel like a part of the story as organically as possible. The accent was really cool, because no one really knows what people sounded like in 1666. So that makes it less daunting as actors because no one can really fact check you.

The time and the workload felt similar to a series. The thing I love about film and about these films is we knew how it was going to finish. Whereas often when I’m working on a series, we get the script as we are going along, so we don’t really know how to map out our characters, the trajectory of their story. This is kind of like the best of both worlds. We got that much time to really dip into our characters and film for five to six months, but also we knew from the very beginning the journey our characters would go on. It was such a blessing to have a best of both worlds in that way.

Reflecting back, what set piece from 1994 stands out to you?

I love the school bus scene. We shot that in the studio on a green screen. We shot that in pieces, and then watching it come together with the car trailing behind it and everything that entailed, I was like, “Wow, this looks like we shot it on a street with the bus actually moving.” The energy of everyone on the school bus was so contagious. Fred [Hechinger], who plays Simon, his energy. Even the background performers, they contributed so much to the story and we are so appreciative of them. They are also really cool to work with.

Did Leigh play ’90s music on set for you?

She actually made Spotify playlists for us. If you wanted to listen to them, to get into that vibe of the ’90s. Also from set decoration to wardrobe, being on set, it really made our jobs easy because it felt like we were back in time. Even little things, on the 1994 set, seeing Blockbuster VHS covers. The phones and the computers and everything just really contributed to the whole vibe. The whole scene helped with that. 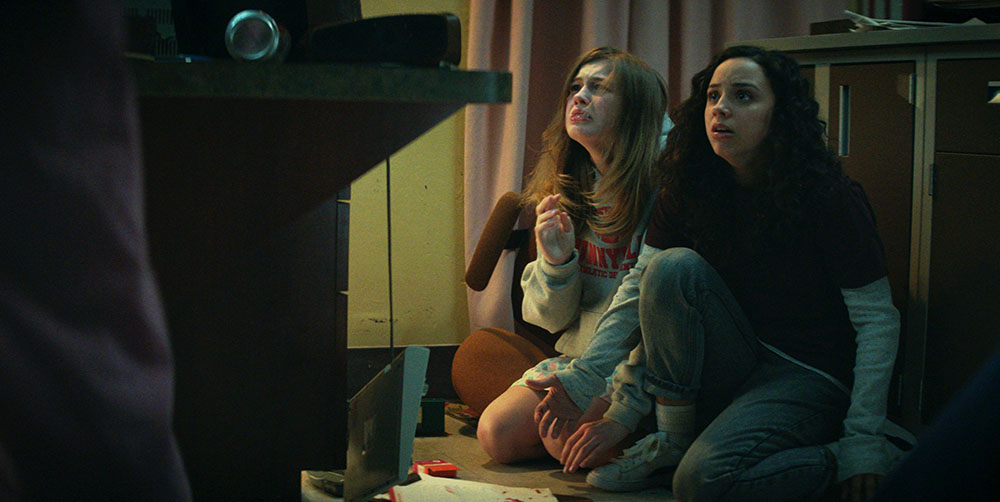 Much of the heart of this trilogy is the love story between Deena and Sam.  How did you, Olivia Welch and Leigh craft that, in particular depicting an era that was less open than today?

Working with Leigh and Olivia was a great experience. It felt safe as actors. We were very communicative together. From the very beginning, our intention was to be truthful and authentic and come from a place of love. We all know what it feels like to love someone and care about them and want to protect them. That was the core and foundation of the Deena-Sam relationship. And we were always checking in with each other, making sure we felt comfortable. Is there anything that you need from me? Or Vice versa? Having that safe space to be open and talk about anything that came to mind really helped us dive deeply into the characters.

Given the fights and gore, what did you learn about movie magic doing that stuff safely?

The props that we had looked believable which is always great but they were as safe as they could be. Rubber for knives. Our stunt coordinator Alan [D’Antoni] was great because we choreographed everything beforehand, which helped us feel safe, because safety is number one at the end of the day and there’s a lot of physicality that came with the story. I realized being on the set that I love doing stunts and I love fighting and I love action, so it was really fun to shoot those scenes.

Was there a scene that was particularly grueling?

There’s one that comes to mind. It was when Deena and Sam are in the police station. It was when Deena was confronting the bigger police officer who is really intimidating. If you watch that scene, you can notice that was shot on Steadicam by our amazing Steadicam operator Nick Muller. It was shot continuously in one take. There was a lot of stealth involved in that scene. I didn’t know originally we were aiming to do it all in one take. So when it was like, take ten maybe, and my character has to be so intense in that moment, really standing up to him. We didn’t move on until we absolutely got it.

Exhaustion can help from what I understand, in a role like this.

The 1994 portion is a couple of days [of story time]. There wasn’t much time to sleep. Nothing about these movies is casual. The fact that we had to do a lot of physical stuff and we worked a lot, really did help. It helped us feel the exhaustion and energy that we needed to be so resilient.